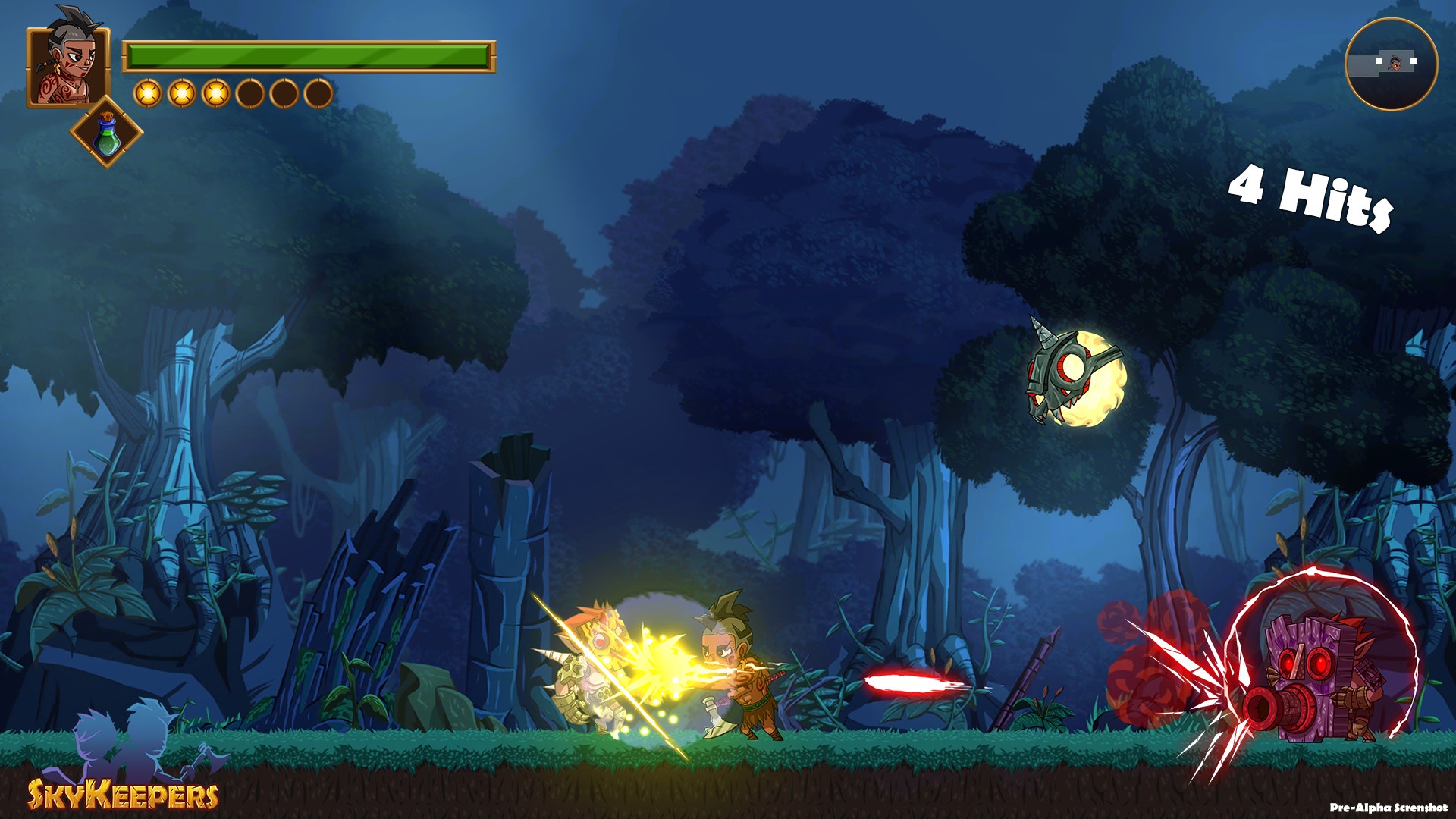 In the current era of modern gaming, it has become increasingly difficult for traditional 2D platformers to stand out amongst other genres. First-person shooters or immersive RPG titles available dominate the gaming scene, yet there’s been a resurgence and demand for original platformers with recent hits such as Shovel Knight and the remastered Crash Bandicoot trilogy. There’s certainly room for other platformers to stand out, but does SkyKeepers meet the mark? (Spoilers Below)

There are two playable characters, the village chief, Tangi and his son, Pelagi. After playing the first few tutorial levels with Pelagi, the game takes a surprising, dark turn which allows the player to take control of Tangi, who seeks to rebuild his once flourishing village. Sword Twin Studio’s isn’t afraid to deal with death and stages of grief which is apparent after the surprising death of Pelagi. However, his death so early in the game didn’t draw any emotions that SkyKeepers was trying to draw simply because the dialogue between Pelagi and Tangi was too comedic and desperate to make several 4th wall breaks. If the characters didn’t take themselves seriously, why should I? 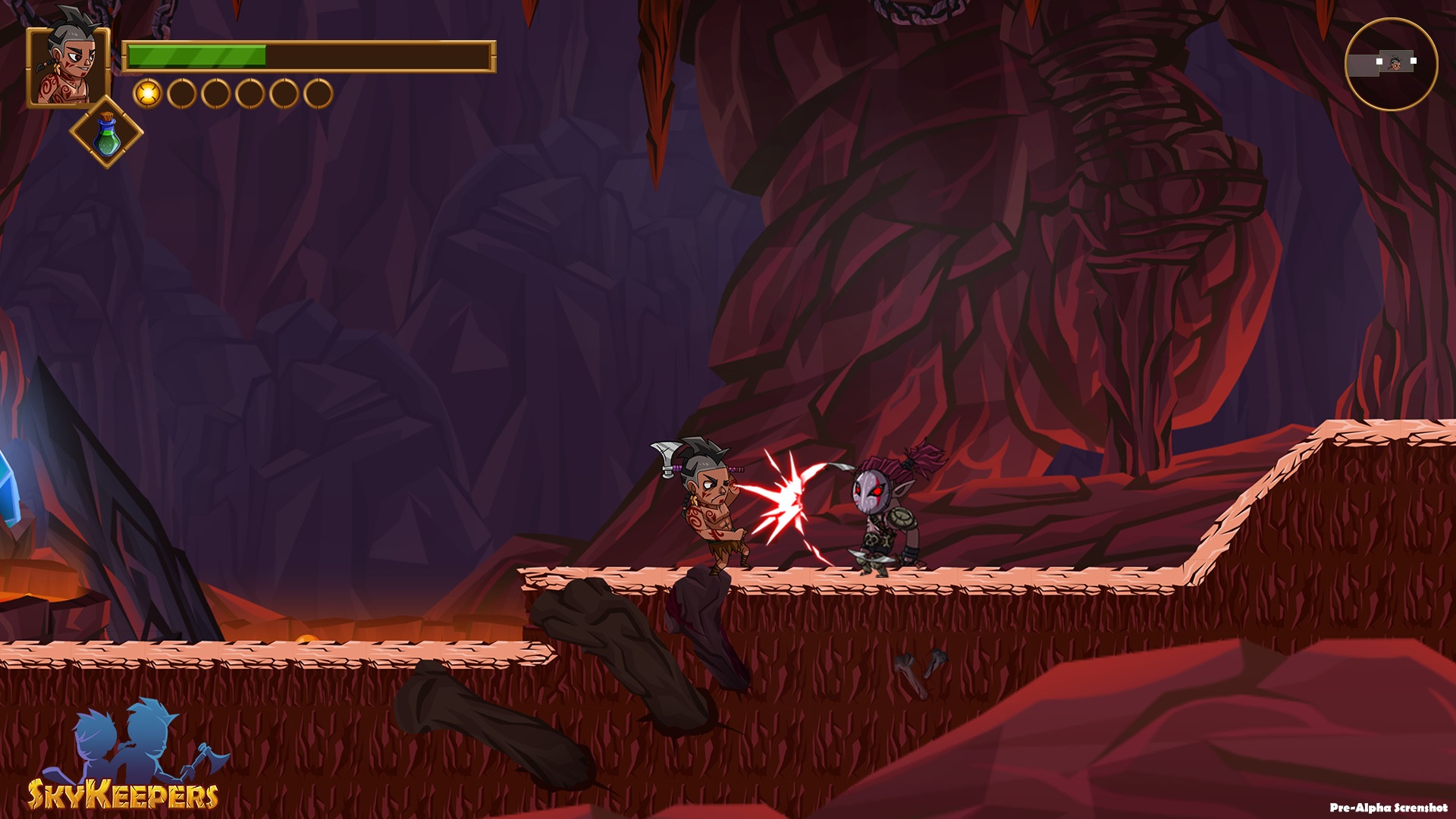 The presentation of the game leaves a lot to be desired for. The background designs aren’t engaging, nor do they add to the appearance of each level. It’s also a questionable design choice given that the story arc for Tangi focuses on the grief and mourning of his son, and the arty style detracts from this, making Pelagi’s death not seeming important. The plot’s sudden change of direction and art style feels disjointed and the two simply don’t mesh well with one another. The tribal drums in the background do a better job in creating a decent atmosphere, but eventually the soundtrack feels drawn out and dull.

Whilst the game may appear well-polished on the surface, the gameplay itself is fundamentally flawed which is obvious throughout each level. The wall jumping isn’t as smooth and fluid compared to other platformers. Some parts of a level require the player to go through an obstacle course rather than battle enemies to progress through the room, but its clunky mechanics and lack of double jump adds to the frustration when losing health after falling into a trap. However, the ability to Spirt Walk allows the player to teleport to certain blocks placed in various rooms. The ability is fun and aids in exploration when mastered, but even the placement of blocks to teleport too unknowingly creates a challenge to beat a broken room rather than a difficult one. 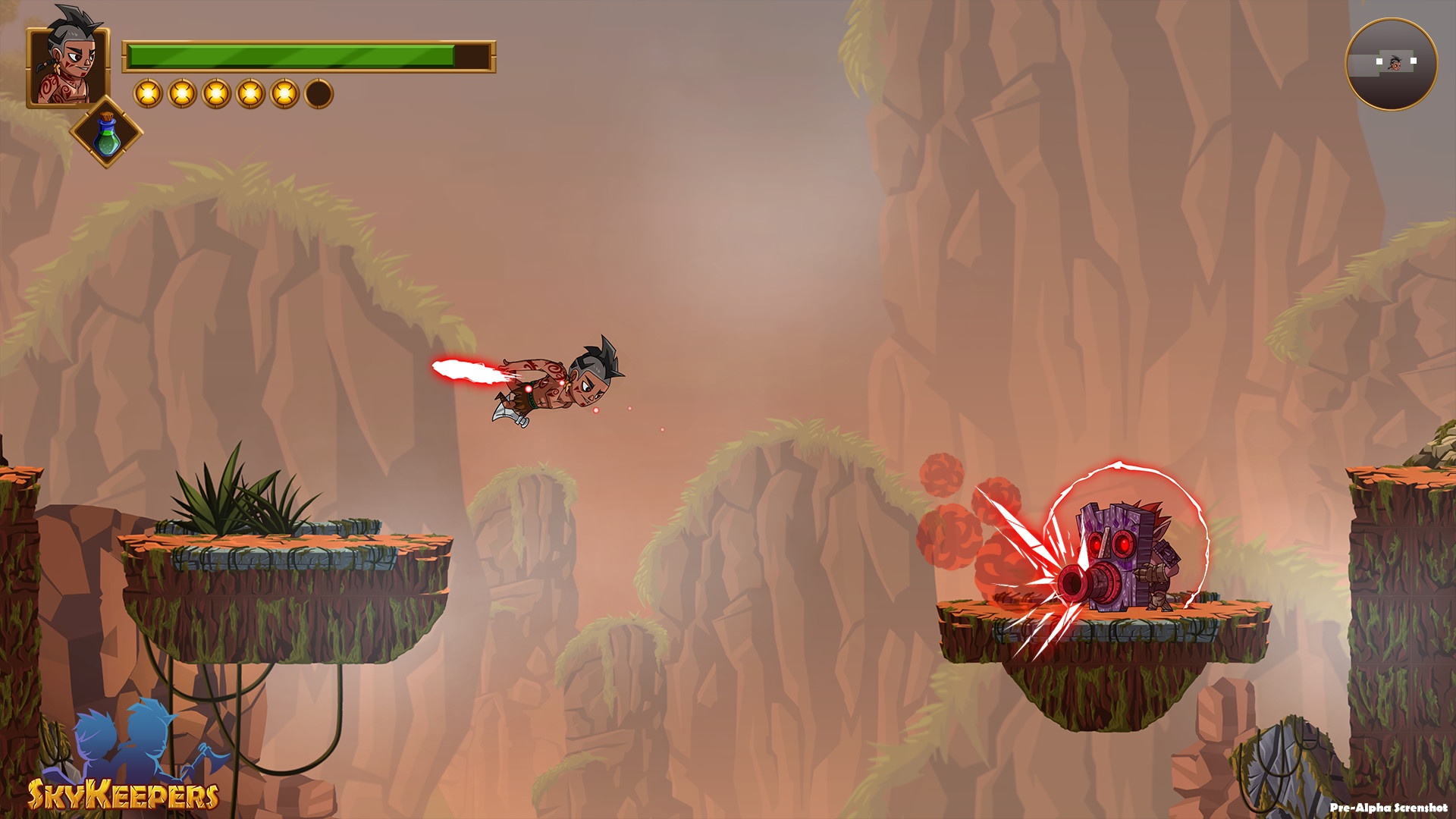 The combat system in SkyKeepers is equally frustrating because there’s so much potential for it to be fun, but the game fails to deliver an engaging, fighting experience. The mechanics are well-thought out and the game introduces a wealth of attacks, defences, and combos that the player can use. There are various enemies with different abilities that challenges the player to adapt their chosen fighting style to gain the upper hand. Spirit Walking is also embedded into the combat, allowing the player to teleport across the room to a wounded enemy. The combos are satisfying to achieve and its genuinely fun to clear out rooms of enemies in its first few levels. The boss fights are solid and challenging too. In a closed room, players are forced to study its movements as well as requiring the player to use their reflexes to win the battle. Despite the solid combat in SkyKeepers, it gradually becomes repetitive and unrewarding after each skirmish. You walk into a room, it gets closed off, you defeat a couple of waves of enemies. You move on, go into another room and the same happens again. It feels like Sword Twin Studios ran out of idea to make each level different and figured that locking the player into countless rooms repeatedly would be enjoyable. The pay off is minimal and takes away from the combat mechanics that are in place.

SkyKeepers is a frustrating game however it isn’t a poor, unimaginative platformer, it has numerous issues that make it a flawed title. It’s hard to understand what Sword Twin Studios was aiming to deliver. If they wanted to tell an impactful story dealing with serious issues, the dialogue should reflect that, or at least create a sincere atmosphere, not focus on witty 4th wall breaks. If the title wanted to stand out with its combat system, don’t overexpose it to the point where the player notices its flaws that become apparent after mindlessly killing enemy after enemy. I wouldn’t mind recommending this game too a friend, but at the same time, I’d feel compelled to warn them of its flaws. SkyKeepers could be a fun platformer if you’re willing to ignore these problems, but in its current state, there are many other titles that deserve your attention.