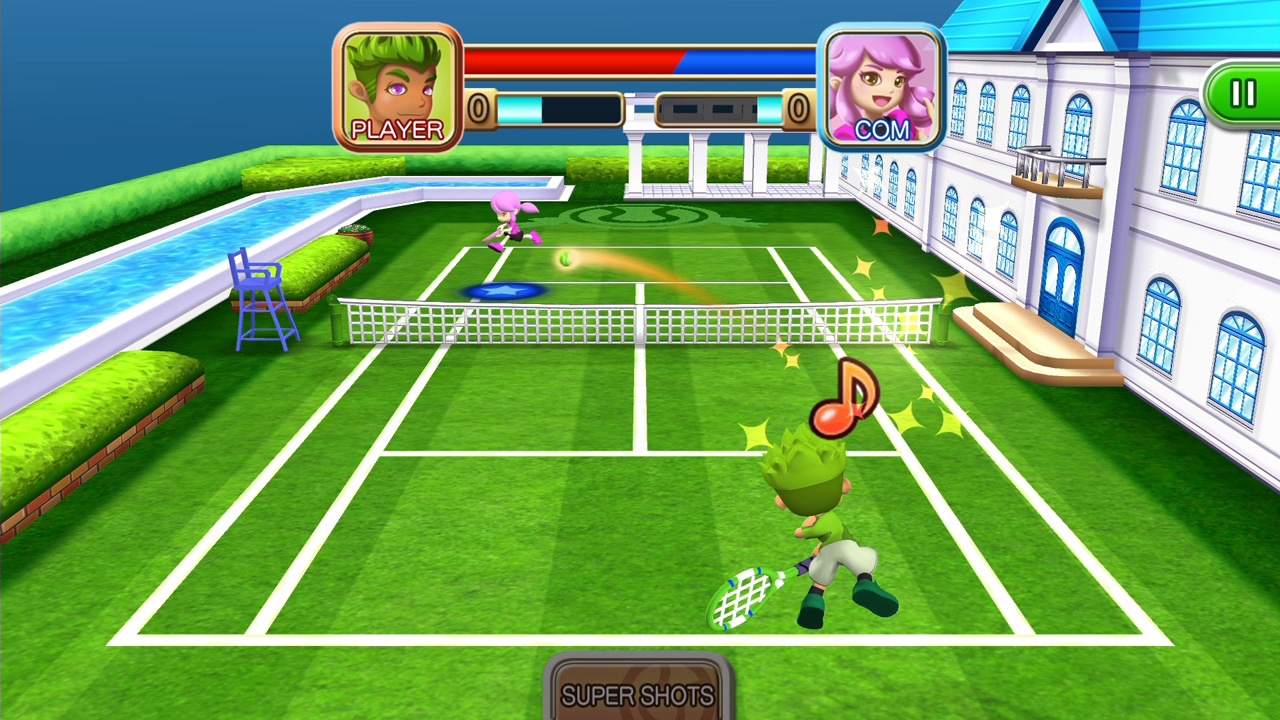 There’s inherent danger in giving your product an incredibly simple name. Sometimes it can lead to greatness: games like Soma, OutRun and Yesterday are some of my favorites, and they stand out by having singular titles that intrigue and pull people in. But, on the other hand, it also makes it seem bland. Take a lot of the early Atari and NES games: plenty had one word titles (Boxing or Baseball) and people couldn’t tell you much more than what they did, which is what they were called. And that very problem exists with the latest Switch title from D3 Publisher, Tennis. Don’t get me wrong: there’s definitely tennis: there’s just very little else.

There is zero plot to worry about with Tennis, so don’t think you need to sit down and sift through a Dickensian back story in order to fully enjoy it. There’s a tennis court, people are gonna play on it, and you have your choice of characters who will play. You can do a rally challenge to see how many times you hit it back and forth, a tournament against other CPU players, or a couple quick matches either alone or versus another player. It’s…well, it’s tennis.

One of the first things that’ll grab you is that the game is very colorful, in terms of players, in a way that’s supposed to try and make each character seem different and exciting. They’re all very anime-esque, with shocks of neon hair color and also a bunch of mixed but somewhat vague ethnicities. The idea here is clearly to make a pantheon of generic characters who also have their own sort of spin on things, but it feels very simple overall. Each character has some sort of strength and weakness that are meant to balance each other out (strong movement with weak spin, heavy power with low control) or just slightly middling overall with no real advantage, just mediocre. So you’ll end up grabbing whichever character annoys you the least with their voices and appearance. Everyone has a voice, and they’re all different, but, due to the lack of plot, they’re just yelling generic things about winning and working hard and such. 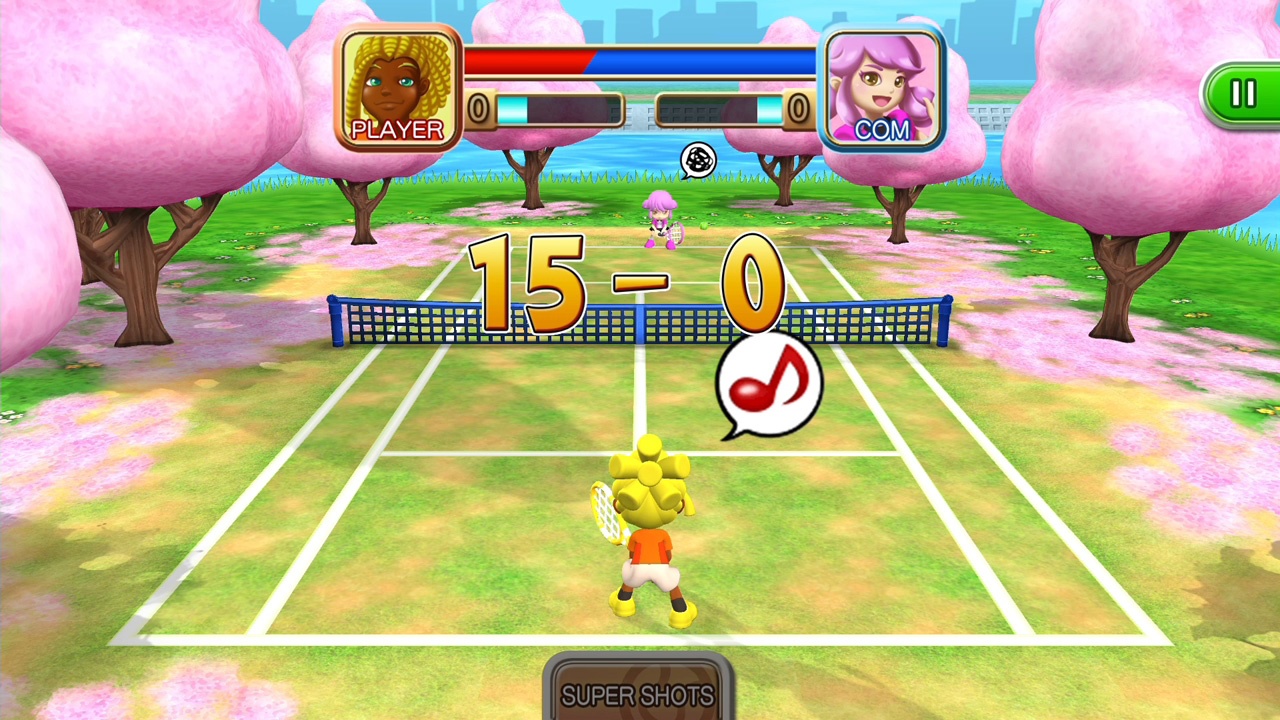 With the large buttons and big eyed characters, people might incorrectly assume that Tennis is a spiritual successor to Wii Tennis and get excited at the prospect of motion control, especially with a Mario Tennis game coming down the pipeline (not gonna lie, very excited for that myself). However, you gotta go ahead and let that hope die: there are zero motion controls in this one. The Nintendo website claims you can use motion controls, but I assure you there is nothing there whatosever. I fiddled with every potential combination of things, and it simply doesn’t work. Maybe it was yanked at the last possible moment, but don’t believe the website: there are no motion controls. Instead, you’re limited to a lengthy controller explanation that really boils down to using the A button and the joystick. But you don’t even use the joystick to move: your character automatically homes in on where the ball is going regardless of what you want them to do.

The joystick is, supposedly, supposed to help aim where your return hit is going to go, and it mostly work. A lot of the time, I felt that the direction of the ball either followed where I pointed it to go or actually went the latitudinal opposite way. Ask for the front side of the court, end up in the back corner. Whatever, it mostly worked. And when I got a power strike opinion (which occurred after so many rallys) it kind of hit harder, I guess. Mostly I had a quick animation of my character powering up like crazy and then hitting the ball, and then the CPU hitting it back. Even on amateur difficulty, I don’t think they cared much what I was doing. This only is further presented with the touch controls, which involves tapping anywhere on the screen to return the shot, and tapping the power strike button when it’s lit up. Phenomenal. 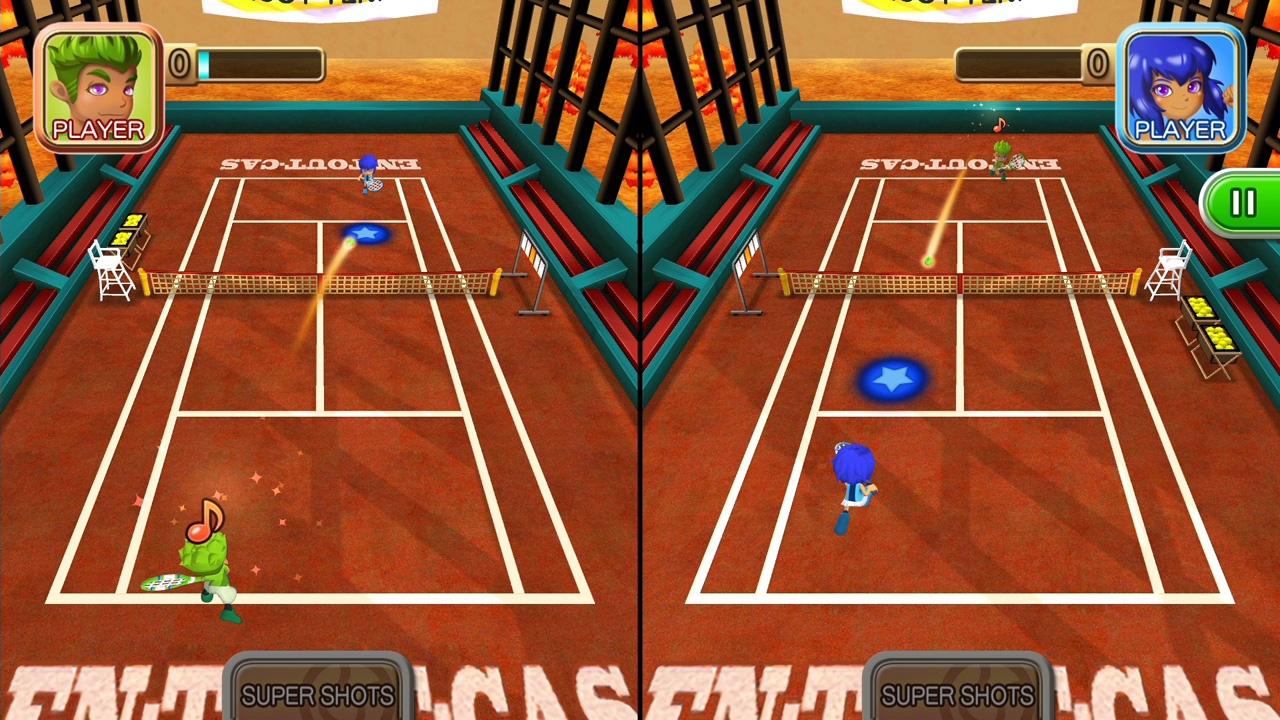 The lack of variety in the game is only made more apparent when you drop into the settings for Tennis and find…not a lot. You can change the difficulty from amateur to veteran and then professional, but I literally could not discern if it did anything to the game itself. You can also set up a custom game here, but the limitations for customization are basically the win conditions, and it’s all about points and number of games won. So when it all boils down, you have…tennis. And there’s nothing inherently wrong with that, and many may even be quite excited by the prospect of a no frills sports game. You gotta admit, the level of insane customization that comes with many sports games nowadays tend to be overwhelming for the casual fan looking for something to simply pick up and play.

Tennis does work well at what it attempts to do, which is emulate a straight up game of tennis with as few variables as possible. But one of the biggest things is definitely those motion controls, and the lack of them was a serious blow to a game that needed to do one job to carry its title. If you’re a diehard tennis fan, don’t care about a single athlete being in this game and are good to play something pretty damn simple, then alright, awesome, this is your game. However, if you want absolutely anything more out of life other than returning serves without any skill and unlocking achievements that aren’t connected to a central system, then Tennis might be a hard pass.