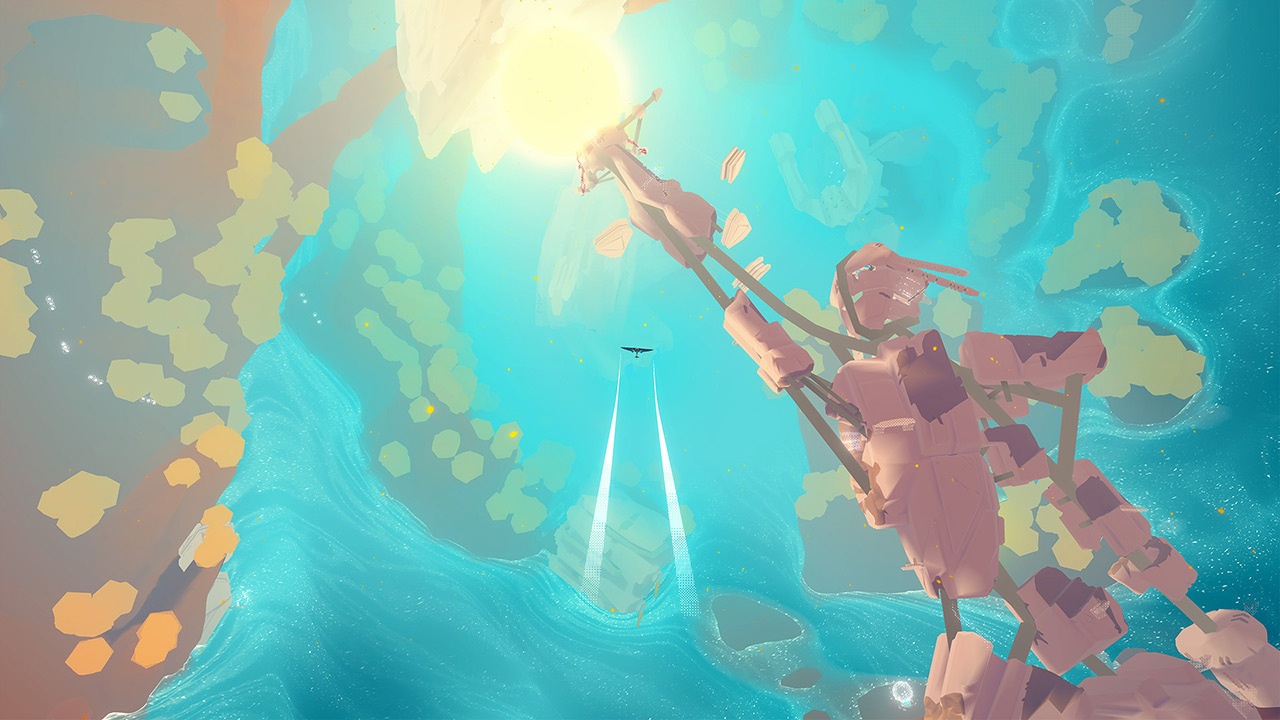 One of the reasons that I enjoy playing video games is the feeling of immersion which they provide for us. By transporting players into worlds, roles and situations that they wouldn’t normally find themselves in, they offer a way in which we can lose ourselves within the elements of their gameplay; essentially becoming lost within the game. However, with InnerSpace, a title developed by PolyKnight Games and published by Aspyr Media, I most definitely found myself lost, and I mean really lost, literally!

In a brave move by the developers, this was completely their intention as the game begins with you, an AI named the Cartographer, being introduced to the Archaeologist, a mysterious being who has created you for the purpose of helping him with his studies. From his submersible, he briefs you on the Inverse, an alternate dimension full of inverted lands in his quest to uncover the secrets of the Ancients, an advanced race that have been long extinct. Equipped with an airframe, a flying device that look like a cross between an aeroplane and a hang glider, the archaeologist duly sends you off to explore these various lands in order to collect information that he can process.

Although you play the role of an AI, your intelligence is only limited to your own. You have no knowledge of the Inverse apart from it is what it is. You have nothing to guide you, no compass, waypoints or information as to what you should do in order to complete your quest. The Archaeologist does offer some brief instruction, but this is very vague and rarely contains anything that can help you apart from the need to collect artefacts and wind; pockets of energy that fuel whatever remnants have been left behind by the Ancients. 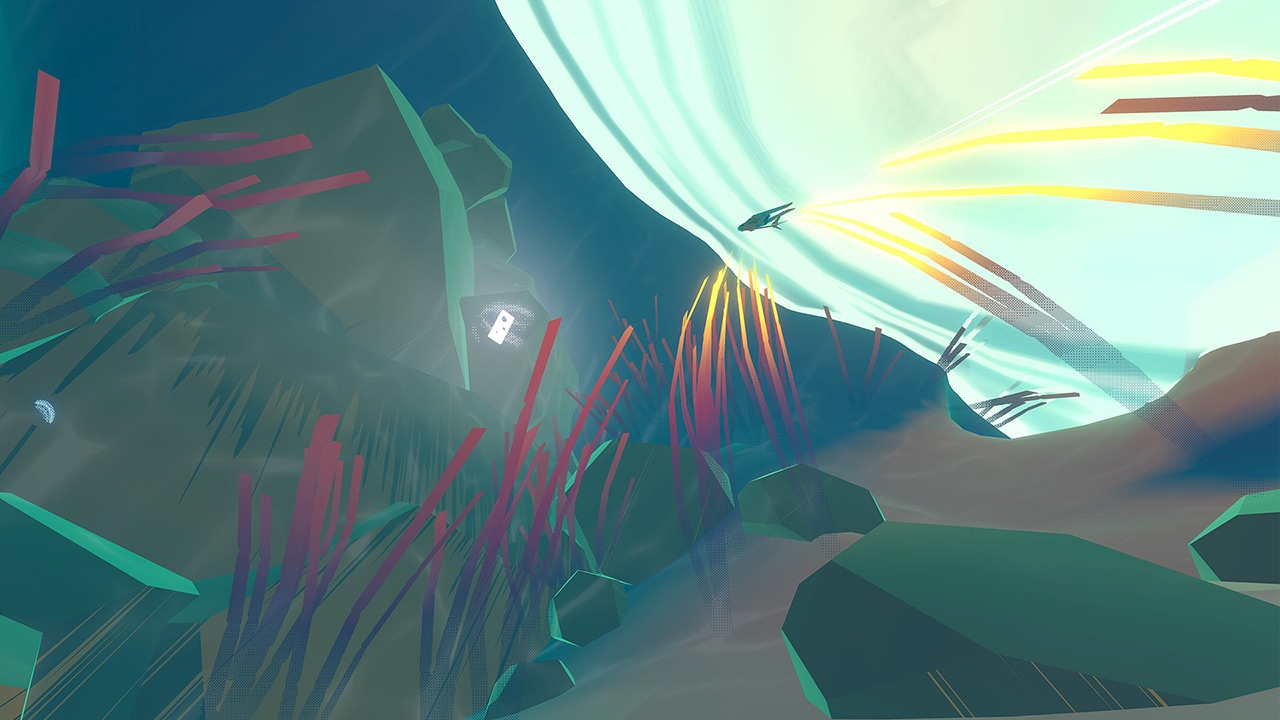 It is literally left up to you to traverse these various, inverted, landscapes in order to find and collect your specified objectives and this is what makes up the bulk of the game; flying around in your airframe to seek out these elusive items with no guidance as to where they may be hidden. You truly feel lost as to what to do or where to go, but this is not necessarily a bad thing and actually creates a game that feels fresh and new.

The inverted lands feels truly alien here, with oceans that swirl beneath you, around you and even above you with strange architectures that jut out from the landscapes with no horizons on which to gain a perspective of bearing. The best way to describe these settings is to imagine being inside a gold fish bowl whilst looking out; it all adds to a feeling of alienation and disorientation as you blindly guide your airframe through varying pillars, caverns and trenches. However, these landscapes are graphically impressive with some wondrous moments that are truly hypnotic.

Flying your airframe can seem difficult at first, with your pitch and yaw being mapped to the left joystick and your speed and roll being controlled with the right. However, the control scheme here is wonderfully tight and you’ll soon be gliding amongst the landscape with elegance and pulling off the smoothest of moves as you traverse around the twisting corridors of the scenery and interiors of alien structures. As you begin to collect artefacts and wind, your airframe can be upgraded with varying models; each one offering differences in speed, agility and durability. You even gain the ability to dive underwater, allowing you to explore further amongst the depths of the swirling oceans that surround you. 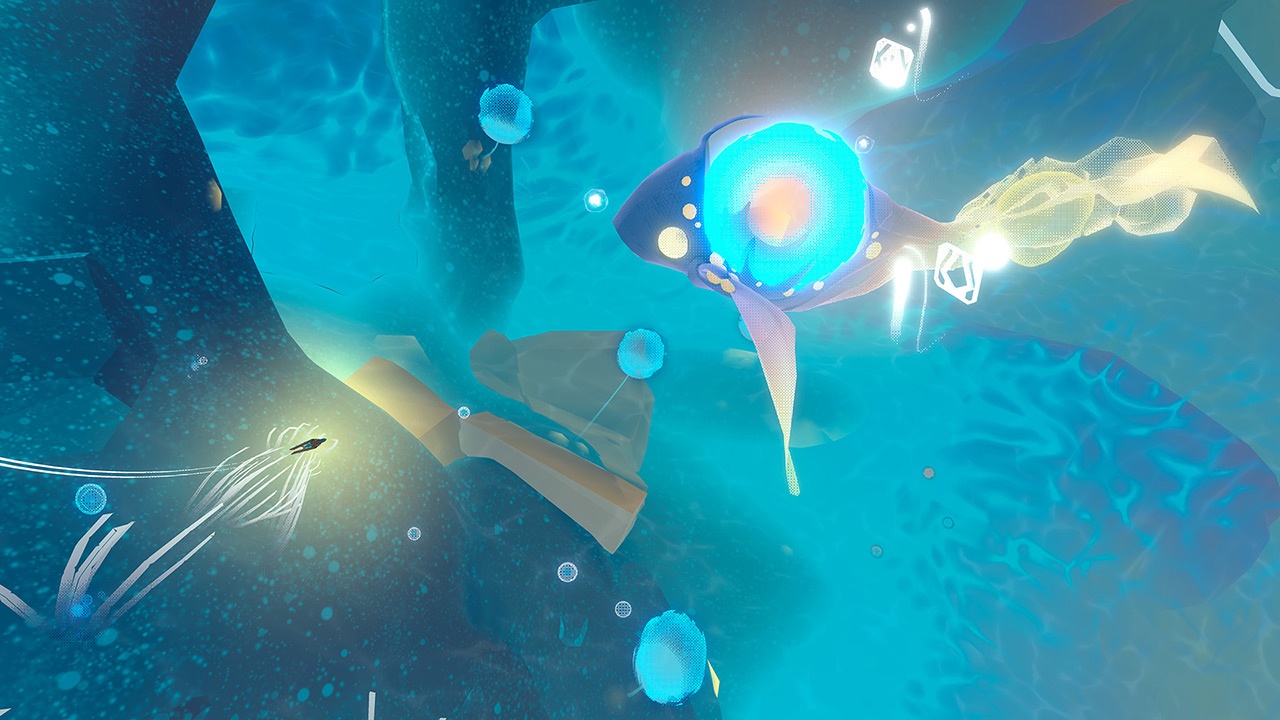 There are no enemy encounters or timed objectives here and, along with a subtle but beautiful soundtrack, creates an ambience that is relaxing and fascinating as you explore the Inverse. InnerSpace has a true science fiction feel to it. I genuinely felt Star Trek moments as I sought to seek out new life and new civilisations; to boldly go where no man has gone before and I was enthralled as I sped through caverns and trenches with a Star Wars thrill that was just as exciting as flying through the Death Star. If you’ve had a hard day at work or at school, this is the perfect game in which to unwind with as it’s a beautiful way to de-stress. However, be warned that you will spend many hours just flying around aimlessly as you try to figure out what you have to do next. There are some subtle hints, both textually and visually, that help guide you but it’s inevitable that you’ll experience some form of frustration. Don’t let that put you off this game though, as the more you put into it, the more you will get out from it.

Despite the feeling of hopelessness, when you do discover the solutions to your objectives it makes your efforts feel more rewarding and fills you with the urge to explore further. There is a lot of trial and error here, you can’t escape it, as you experiment with different methods of unlocking areas or releasing artefacts but this is where the fun lies; in finding out the unknown. The game is full of mystery and intrigue and as you progress further, you begin to learn more about your environments and how best to deal with them. The sense of achievement you get from unlocking the secrets from a particular area is unmatched by any other game I have experienced. You really do feel you have accomplished something by finding the answers to a question that hasn’t really been asked.

Perfect for quick play sessions or for losing yourself for a couple of hours, this title has a lot to offer if you can see past its frustrations. It may not necessarily be a game to suit everyone’s taste and there could be some question marks over its replayability once finished, but if you like exploration and fancy a soothing and hypnotic journey into the unknown then you can easily lose yourself within the trance-like worlds of InnerSpace.