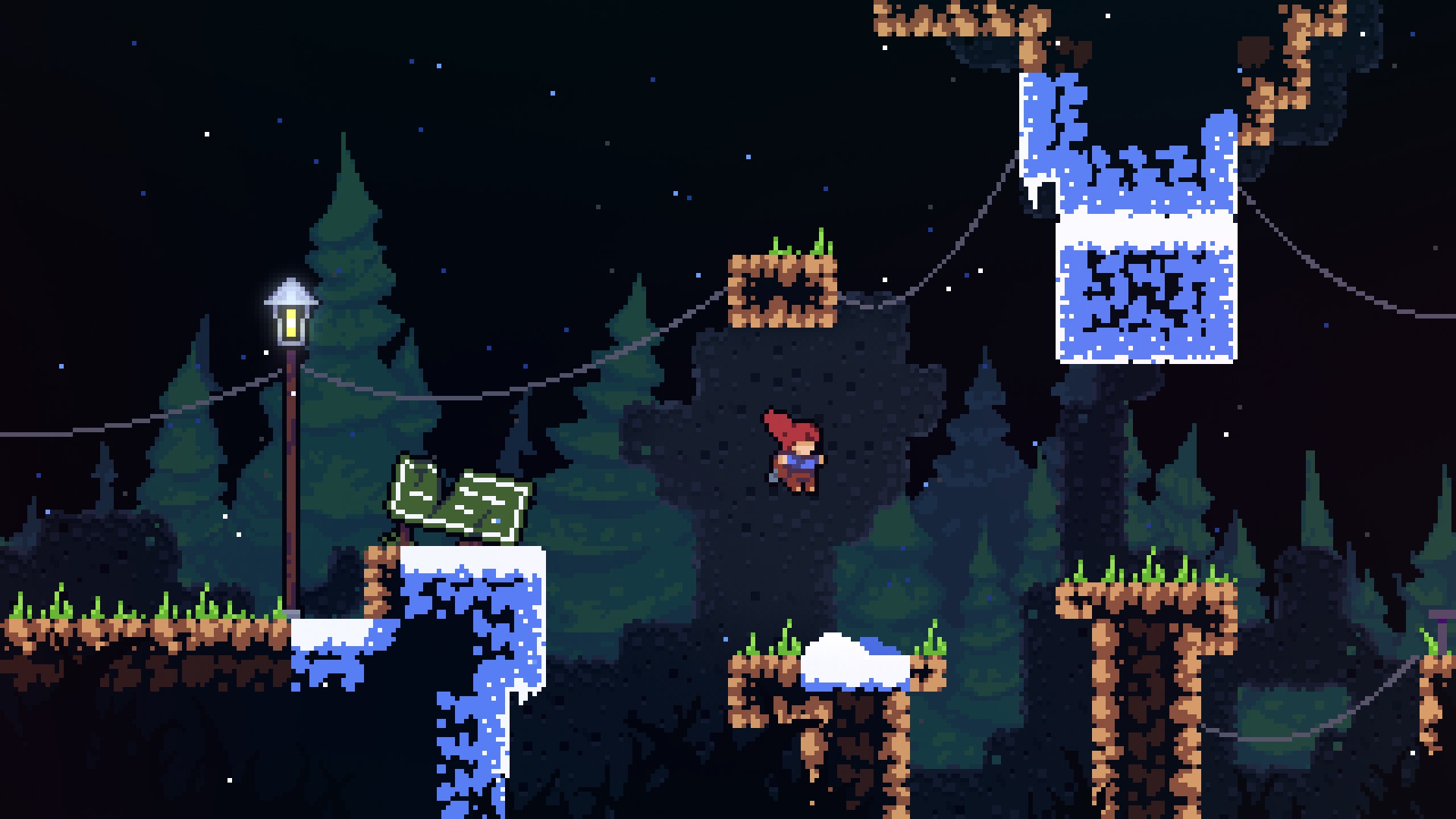 It’s hard to try and make your original voice heard when the hype train is basically screaming along in 7th gear, but people are absolutely dying with love over Celeste. This is far from a criticism unto itself, and it should make reviewing it even easier. Instead, there is now an expectation that this’ll be an automatic 10/10 and to do otherwise is either being a contrarian or a curmudgeon, with no redeeming way to spin my words. So, with a pocket full of trepidation, here is my own, uninfluenced review of Celeste.

Celeste is, at its core, the story of a girl trying to climb a mountain (the mountain’s name being Celeste). The reason for this is simply wanting to do it: our protagonist has told herself she’s going to do it, and so she shall. It’s implied that maybe our heroine isn’t exactly reliable in keeping her own word to herself but this time shall be different, so she says. And so she sets off to climb the mountain. Along the way, things start happening, and it’s not clear if all of them take place in her head, only some of them, or if there’s a nice mixture of a fantastic world and her own imagination at work. In any case, though there didn’t need to be one, there’s a wonderful little plotline that keeps the game moving forward in an involving and interesting way. I named my main character Natalie, because why not, and I grew incredibly attached to her own motivations and thoughts. This was a journey together, and that’s pretty impressive for a game that isn’t an RPG.

Mechanically, Celeste functions entirely on the simple basis of jump, dash and hold. Jumping is the only real way to move around, but then you also stack a dash move that cuts through the air and the ability to grip onto walls and surfaces. All of this would be pointless if the levels were designed, in any way, to allow for a smooth trip upward for our dear protagonist, so, as you can imagine, the journey is anything but simple. Thankfully, those mechanics I just mentioned are hard polished to diamond sheen and perform absolutely admirably. Since things are incredibly simple in terms of what you need for execution (really, just three buttons and the joystick) you can go ahead and approach scaling Celeste with whatever controller you prefer. Having said that, I highly, highly recommend a Pro Controller or at least something a bit on pro level. This is for comfort, better hand layout, and it’s far, far too simple to throw a JoyCon across the room. 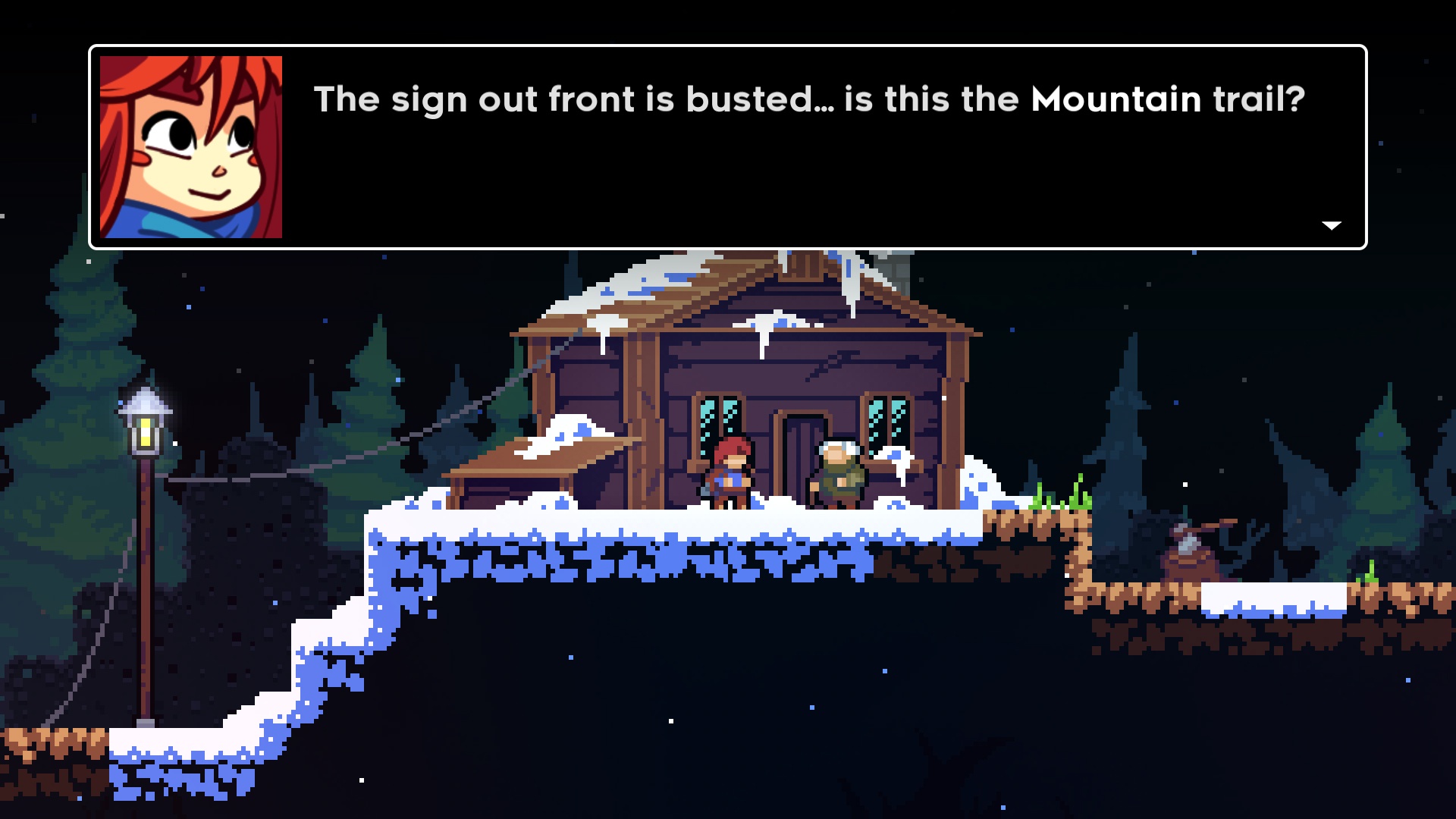 Celeste is hard. And I mean that in the same way that Super Meat Boy is hard, in a fashion that is very open, honest and upfront about what’s in store for you. Players may, unwisely, think the game is just a normal type of difficult platformer after they complete the first area, and that’ll be your undoing if you carry that same sort of mentality for the remainder of the game. Right away, the second area introduces a whole new area based mechanic which is the fulcrum of the 2nd spot but doesn’t occupy the remainder of the game. Then the third area introduces something new, and you gotta remember it and learn from it before discarding it for the fourth area. Everything in the game is challenging, but nothing is impossible: you don’t learn through trial and error. If you legitimately have solid reflexes and understand the way the game is played quickly, you’ll be able to ascend and create your own fastest run without a lot of downtime. In fact, it would be a surprise to not see this game showcased in the next speedrun event (AGDQ, I’m looking at you).

Moreover, there’s a lot more to the game than meets the eye. There are strawberries that have been peppered throughout the levels, and they’re somewhere between “hard to get” and “you’ve got to be kidding me,” since they need to be nabbed without dying in the process. The game keeps careful count of your strawberries, as well as how many times you died trying to get past an area. There are hidden tunnels that lead to collectible blue hearts (essential for a special surprise after beating the game) and PICO inspired mini games that are also far out of the way. These PICO levels, which are kind of a 4 bit callback, are surprisingly excellent and their own special brand of fun. For some, they may prove too difficult or tedious to deal with, and you will lose nothing by choosing not to play them. However, if you really enjoy the challenge and find yourself a bit cocky in the main event, be sure to fire up the PICO anywhere you find it (or even from the main menu) to help humble yourself a bit. 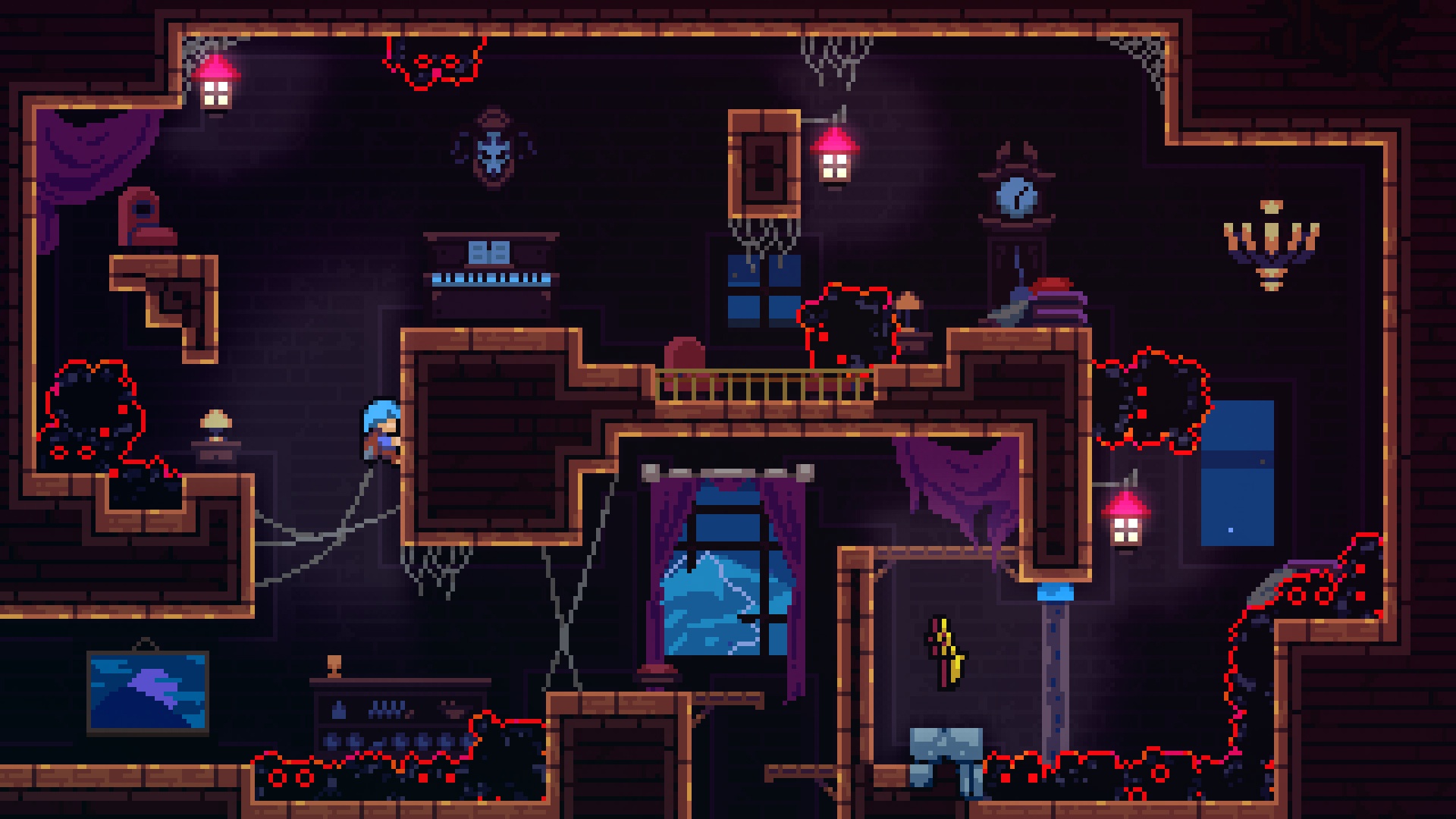 But the biggest takeaway from Celeste is how amazing the game is from such a humble idea. Your character is identifiable and someone that anyone can imprint themselves upon, for we’ve all had moments where you finally say “this is it” and do the thing you’ve been putting off or were too scared to attempt. Through delightfully rough pixel work and some surprisingly engaging tunes, you end up falling, headfirst, into the world that you, yourself, are now a big part of. Without giving away too many spoilers, I loved the way that Natalie interacted with the few, important NPCs who decided to speak to me. There was a great balance between sincerity and sarcasm that seemed to manifest itself in a pattern that was, above all else, natural. Perhaps it’s something that only really clicks for a few people, but this is precisely how I would face something, and, to a player, that’s invaluable.

When the time comes for my children to graduate to games that they can play on their own, there’ll be several titles that I recommend they give a shot to see what’s for them. There are a small handful of RPGs and well done sports titles that are timeless and present great start points for newcomers. There are fighting games that have sustained the decades and puzzle titles that still get my brain churning. And, of course, there are the platformers, mostly starring a mustachioed hero, of whom my kids are already familiar with. But, there will also be Celeste to try their patience and their reflexes. It’s hard, but not the hardest I’ve ever played. It’s got great pixel art, yet it doesn’t touch the artist level of things like OwlBoy or Superbrothers. But it has heart, and it comes from an unexpected place that got me good. If they don’t like it, I can accept that, and we’ll all move on. However, if they like Celeste, there’s a whole world waiting for them, and it starts with the first step up the mountain.