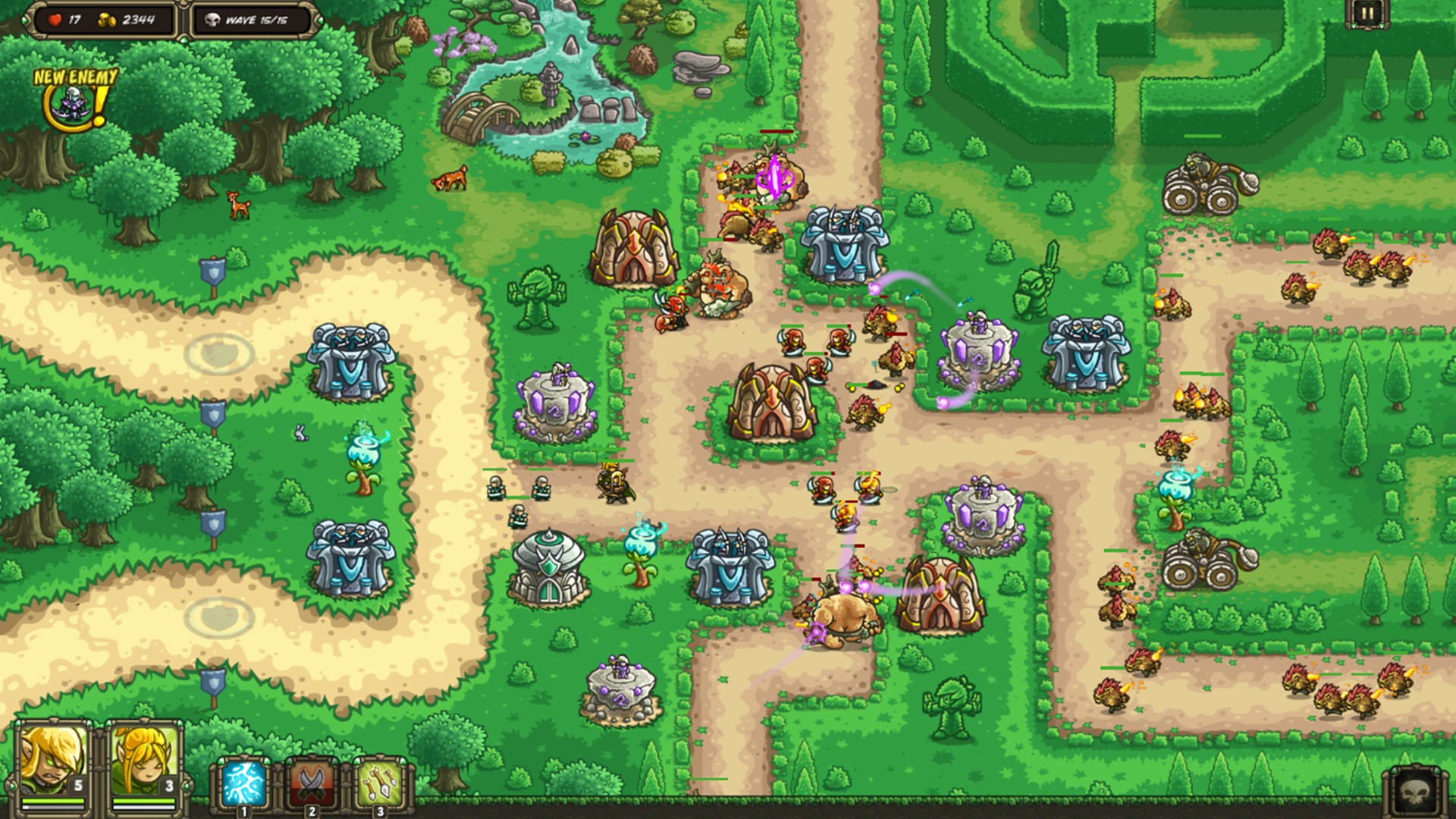 Kingdom Rush Origins is the most recent title from the world-renowned series of Tower Defense games, Kingdom Rush, to hit PC. It doesn’t matter which platform you play on, because if you have ever played Tower Defense games or if you’re a fan of the genre, I highly doubt that you’re not aware of this franchise’s existence.

While I’ve played the first Kingdom Rush game many years ago, I honestly can’t remember much of it. All I know is that I started it when I bought it, but it ended up falling victim to my backlog, and I never managed to get back to it ever since. With that said, the chance to play Kingdom Rush Origins proved to be the golden opportunity I needed to go back to this franchise, because Origins, as the name suggests, takes place before the other games, even if it is the third title of the series. So, if you were hoping to read about how Origins expands on its predecessors, unfortunately, I’m afraid I’m not the best person for the job, at least for now. All I’ll say now is that if there’s one thing that really bums me about Kingdom Rush, is the fact that there is no option fast forward the game to make waves come and go faster.

The Tower Defense genre is pretty self-explanatory, and I believe most people don’t really require an introduction to it, but if I knew someone completely oblivious to its existence, I’m 100% sure that the best way to get them started on the genre would be by introducing them to Ironhide Game Studio’s masterpiece that is Kingdom Rush. Now, as I said, I’m aware that this isn’t the first instalment in the series, but since it’s in first place in chronological terms, I believe people wouldn’t really be missing out on much, better yet, they’d start on a more recent iteration of the franchise, one which is hopefully better than its previous chapters, which I’m often told are excellent in pretty much every single possible way. 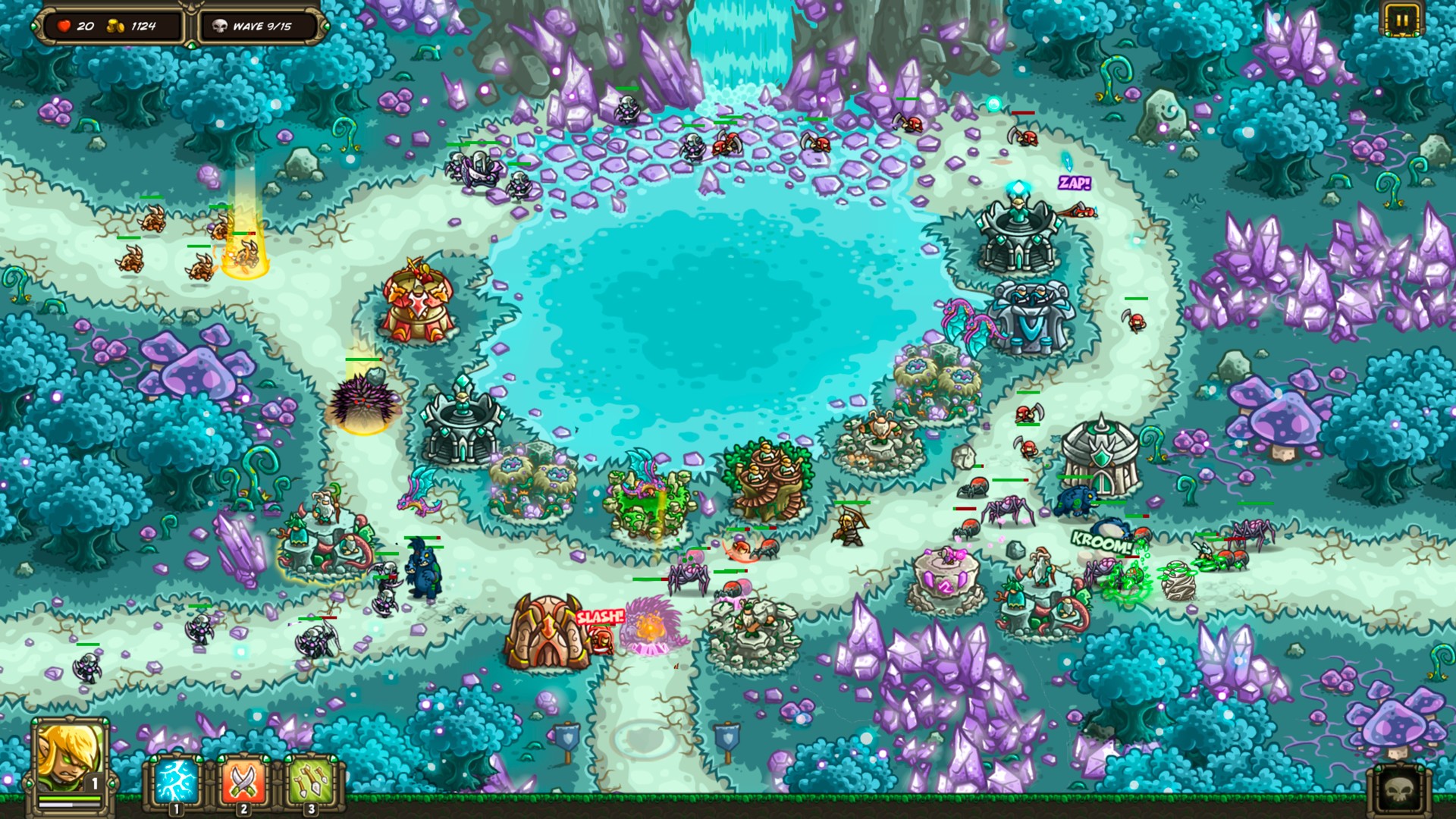 Like every single Tower Defense out there, the entire gameplay loop revolves around completing various levels where you place all sorts of different turrets along a predetermined path through which enemies will walk towards your base. By killing enemies you will gain gold, which you can then use to build more towers and to upgrade the ones that you already have. While some tower upgrades are just straight statistics upgrades like increased attack range or attack damage, the latter updates completely change towers, not only visually, but also by making them stronger against particular enemies and giving them unique abilities, like are of effect damage, the ability to put enemies to sleep or to root them in place.

One of Kingdom Rush’s strongest points is how differently you can approach each level by coming up with all sorts of distinct combinations. This not only increases the game’s replayability, but it also means that different kinds of players are bound to succeed in playing the game and enjoying it through various different means. This is possible not only thanks to the wide and striking variety of tower upgrades but also thanks to the existence of Heroes and active powers, as these last two bring micromanaging to the forefront because you won’t just be sitting back and waiting for your towers to do all the work for you, which is what happens in most Tower Defense games.

Heroes are powerful elite units that you can directly move around the map, and which level up as they engage enemies, which only makes them even stronger. However, the best part about these units is the spells that they give you whenever they’re deployed. While they do only provide one active power for you to use, they also come along with their own powers that they will automatically use during battle. As each hero levels up, its abilities can then be upgraded in the Hero Room, via the map screen. There are a total of 18 different heroes (!!!) in Kingdom Rush Origins, and every single one of them is unique in their own way, providing a different skillset from its peers. Now, depending on how you prefer to play, especially what kind of towers’ upgrade paths you tend to prefer, as well as depending on what kind of enemies you’re facing, in which stage you’re on and whatnot, you might want to hop back and forth between different heroes, as some of them might be able to exploit certain enemy weaknesses. 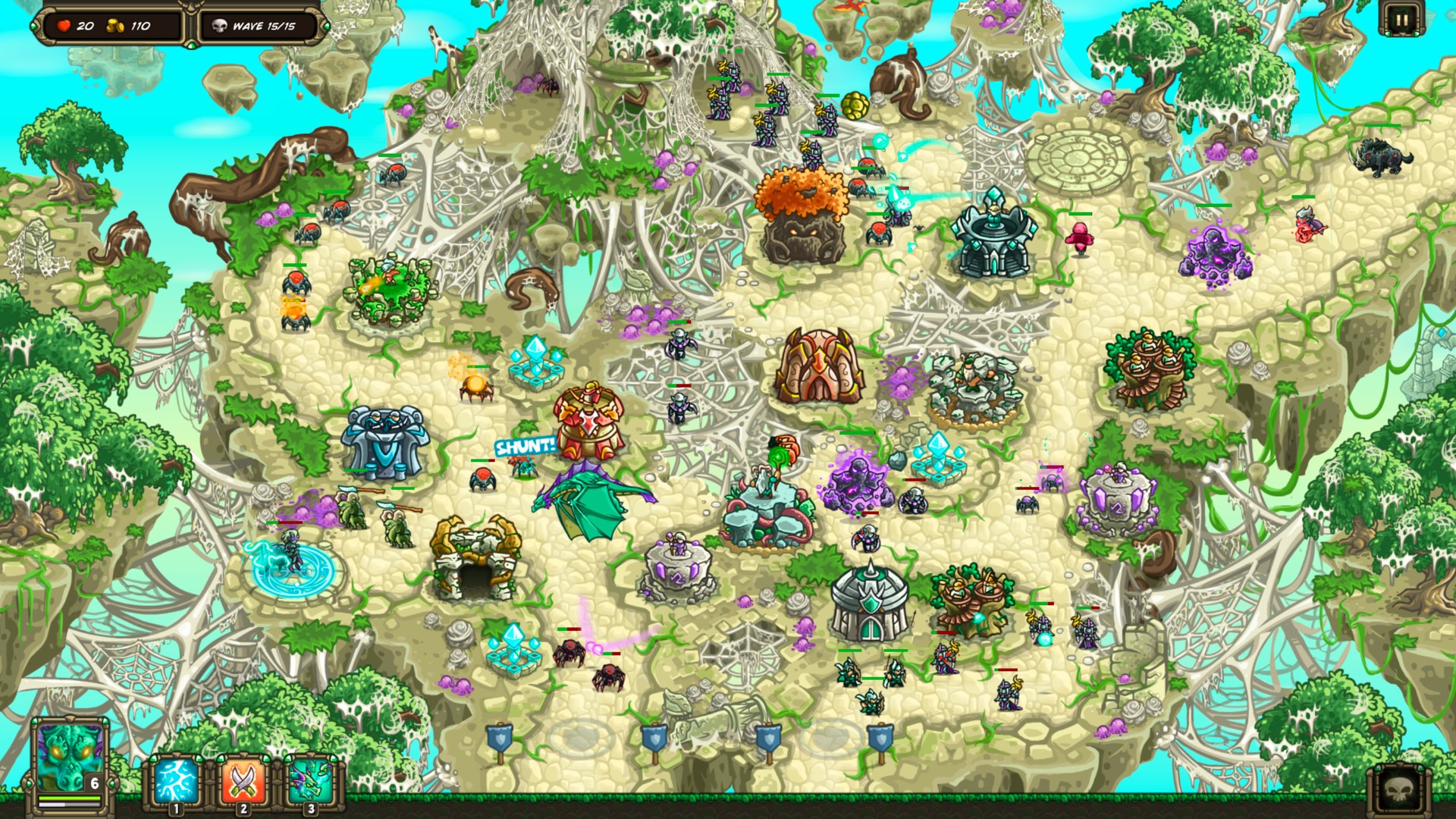 Kingdom Rush Origins also offers tons of levels in its campaign for players to delve into, which can be played in 4 different difficulty modes, and you’re able to switch between these on the fly. This is done in a way that it can make the game feel welcoming to new players, as well as challenging and rewarding to those seeking something hardcore. Nevertheless, upon completion, each level rewards you with up to 3 stars, based on the number of enemies that got through your defences. Furthermore, each level can also be played in two special modes, Heroic and Iron. These two modes restrict what kind of towers and upgrades you can use in each mission, and they each give you 1 star upon completion. Kingdom Rush Origins genuinely makes things harder for the player, but it also rewards players accordingly, as these stars can be used to permanently upgrade your towers and powers.

Kingdom Rush is quite possibly the most iconic Tower Defense game out there in the market, and its art style is immediately recognizable. The game is also full of references to pop culture in the background art and in certain special units, which is only made even better thanks to the series compelling artwork. For some people, Origins might feel like more of the same, which it kind of is, but while that might not be enough for those people to give it a shot, for other folks, Kingdom Rush Origins is surely just what they’ve been craving for, more superb Tower Defense awesomesauce. However, I’m not going to lie, playing this for long periods of time can become rather fatiguing, so unless you’re absolutely crazy about these games, I do recommend to play this in short sessions as it can start to feel repetitive after a while.

In the end, it doesn’t matter if you’re just someone who just wants to complete the campaign once, if you don’t want to complete each level on the two extra modes, if you don’t want to try out all the different combinations and level up all the heroes to the maximum, there’s plenty of quality content here for AT LEAST 15 hours or so. If all you want is more Kingdom Rush, or you just want your next Tower Defense fix, or if you just never tried a Tower Defense game before and want to give the genre a chance, it’s impossible to go wrong with Kingdom Rush Origins.

If all you want is more Kingdom Rush, or you just want your next Tower Defense fix, or if you just never tried a Tower Defense game before and want to give the genre a chance, it’s impossible to go wrong with Kingdom Rush Origins.