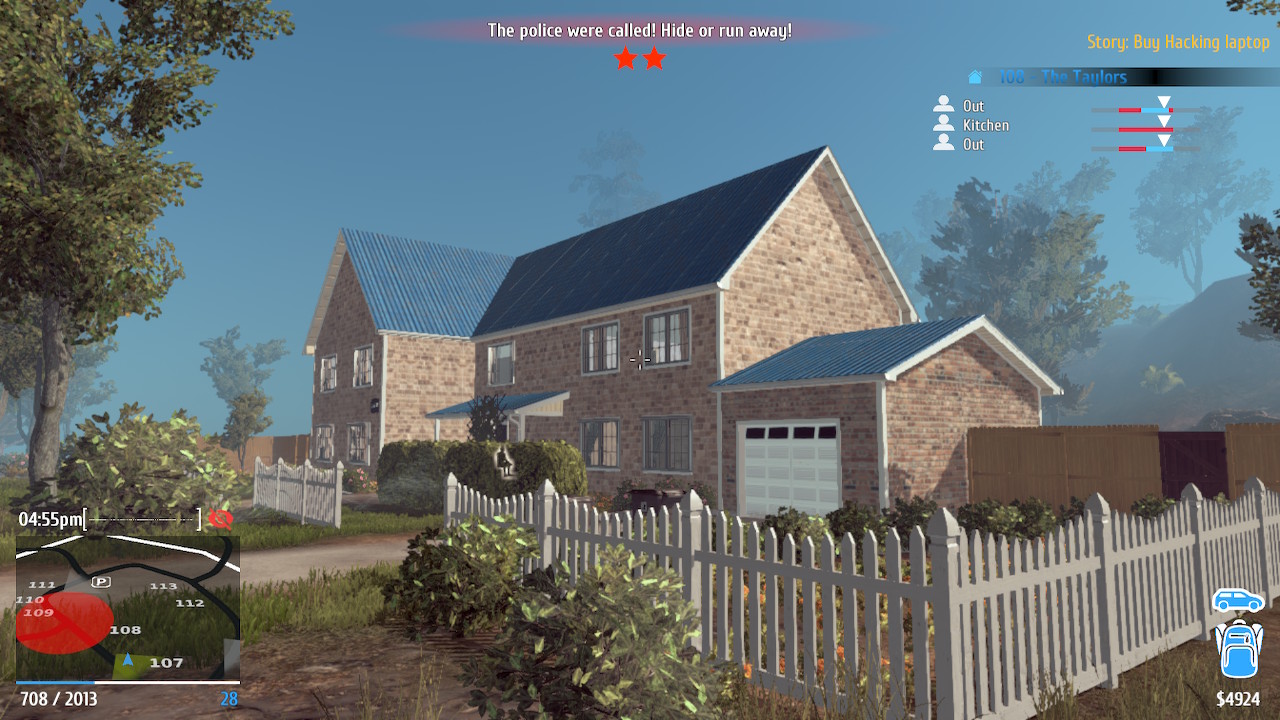 There are a plethora of “Simulator” games on the market nowadays. You can be a goat, pigeon, bus driver, car mechanic or even a loaf of bread. Its a genre which will either have you genuinely intrigued, laughing out loud or glancing at your screen in utter disbelief. Enter the stage Thief Simulator, which at the time of writing will now be available for Xbox One amongst other platforms. This is a unique title which I have never seen done before, so I had a sense of excitement to give this one a play. It has been around on PC for some time, so it is pleasing to see titles of this calibre breaking onto consoles and it has also found its way onto PlayStation 4 and Nintendo Switch. It is officially classed as an open world stealth game by Polish studios Noble Muffins.

Thief Simulator commences with your character stood in a back garden when your mobile telephone rings and you start chatting to a chap called Vinny. It turns out that you have been sprung from prison life to commit a life of burglary for the Mafia. The first assignment has you learning the basics of the movement mechanics and then you’ll be breaking into a few properties using a crowbar and robbing anything that you deem valuable in sight. What seemed a little unrealistic is that you were expected to burgle three adjacent buildings which would be like a flashing red light above your head in real life. You’ll find yourself crouching in the darkness as you shuffle past civilians having a fag at the back door or sitting by the fire in their garden. The AI at this point seemed pretty unresponsive and I didn’t test for reactions in getting close to them, I was more intrigued to get to my goal, which was breaking in and fleecing them for their belongings. 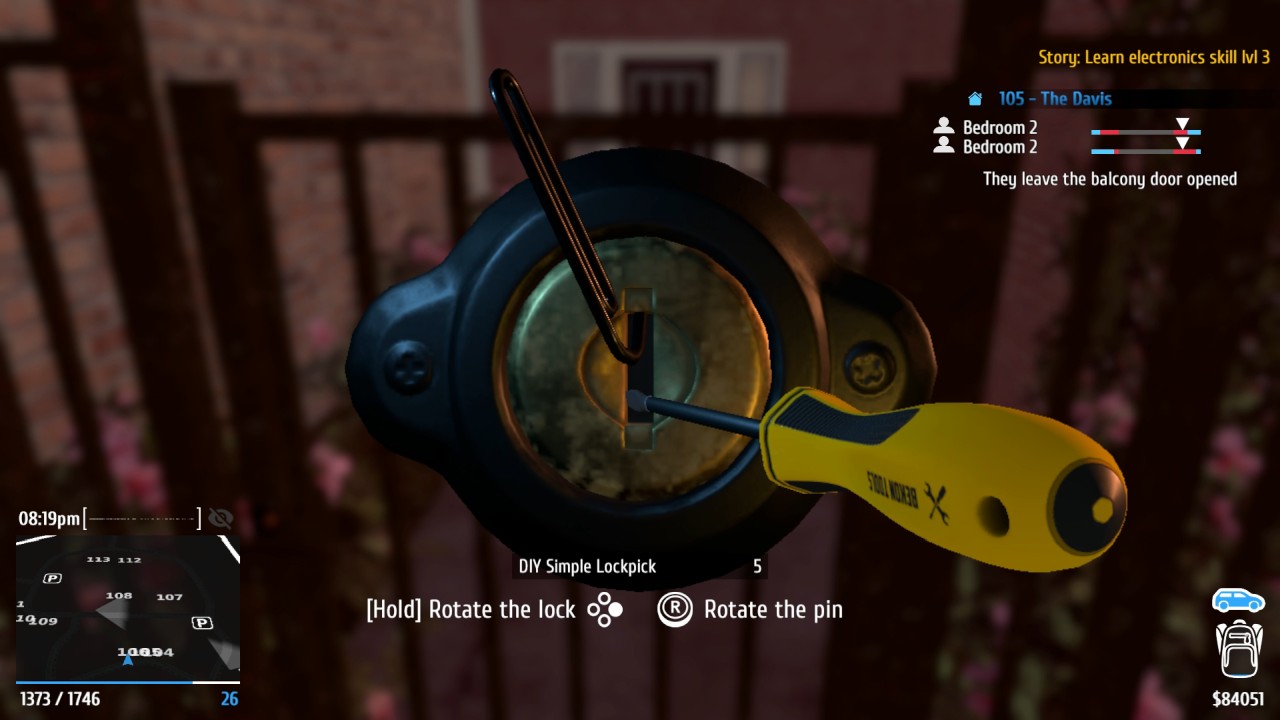 As you delve deeper into the gameplay things start to become a little more complicated and you’re faced with tasks such as breaking and entering, picking locks and unlocking safes. You’ll be able to attempt to hide away under beds and in cupboards if you’re detected and you could also choose to just run away. Residents have guns in their dwellings and also neighbours may ring the police if they spot what you’re doing and in these senses, it becomes realistic. In fact it becomes that realistic that even if your car is parked incorrectly the police will come and investigate.

You’ll be able to go home which is essentially your hideout and you’ll be able to stash anything you have nicked here. You’ll also be able to learn things at home such as how to pick a lock. You’ll also have access to a personal computer where you can access different websites. One website is called Tools4Thieves and you can purchase a range of items to improve your skills at burglary, from a mini electric lockpick to night vision goggles; this website has you covered. Another website called BlackBay, which is a clone of ebay, is where you can sell your stolen goods in return for hard cash. Another website called StealYourForms allows you to gain intel on properties before you decide to attempt to break in. Using this method will reveal spots where alarms may be, where valuable items may be stashed and suchlike. Finally the last website is known as Rent A Thug and this allows you to steal more valuable and certain items for more cash reward. The end game here is all about making money and plenty of it.

In the outside world you’ll be able to take your items to a pawn shop, a little bit like how real life crooks do when they head down to Cash Converters on a Monday afternoon in rainy Liverpool. Sorry, if you’re from Liverpool. What is quite clever here is they won’t accept tablets or mobile devices unless they have been factory reset and you even have to lug big television sets to the desk yourself. 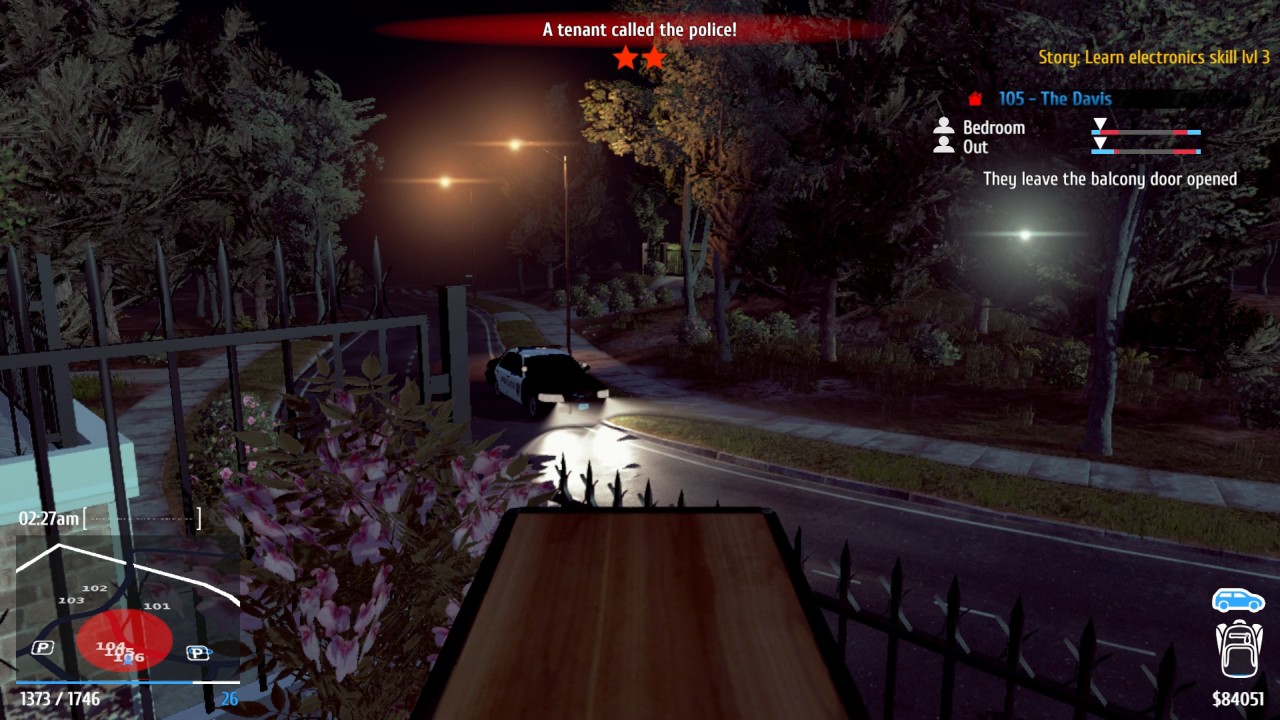 As with most simulator games there is a skill tree system in this one and you earn specific skill points for levelling up your character. This made me want to continue to play the game to reap the benefits so to speak. Obviously the simple premise of levelling up is stealing things and ensuring you’re successful in doing so. You will be able to gain better experience in skills such as lockpicking, the amount of gear you carry, more stamina with large items on board, the list goes on.

The graphics themselves are nothing to write home about here, they are average at best but also visibly pleasing enough to make the game worth playing. The driving mechanics I felt could have done with a little bit more work. When I first drove it was in a third person perspective and it felt clunky and heavy but switching to first person made this more convincing.

Overall Thief Simulator surprised me and it was much deeper than I expected to go. The fact that not only could you steal items, but there are objectives to achieve afterwards that made it much more interesting. I can’t help but think with a bigger budget and studios with a lot more time, this could have been a masterpiece as there is nothing else like it out there. It really did engross me for hours on end and for a lot longer than I intended on giving it and I salute the developers for a stab at something unique here. It is genuinely a game I would return to if I didn’t have such a back catalogue to work through right now. For its price point, it is more than worth the price!

Thief Simulator does what it says on the tin, if you have ever fancied a life of crime for a good few hours without consequence, then here is your chance. With in depth management of stolen goods, a skill tree and a plenty of objectives to achieve it is definitely a steal at the price

Fantastic use of management of stolen goods

Driving mechanics can be frustrating

Open world could do with being a little larger

AI can be lazy