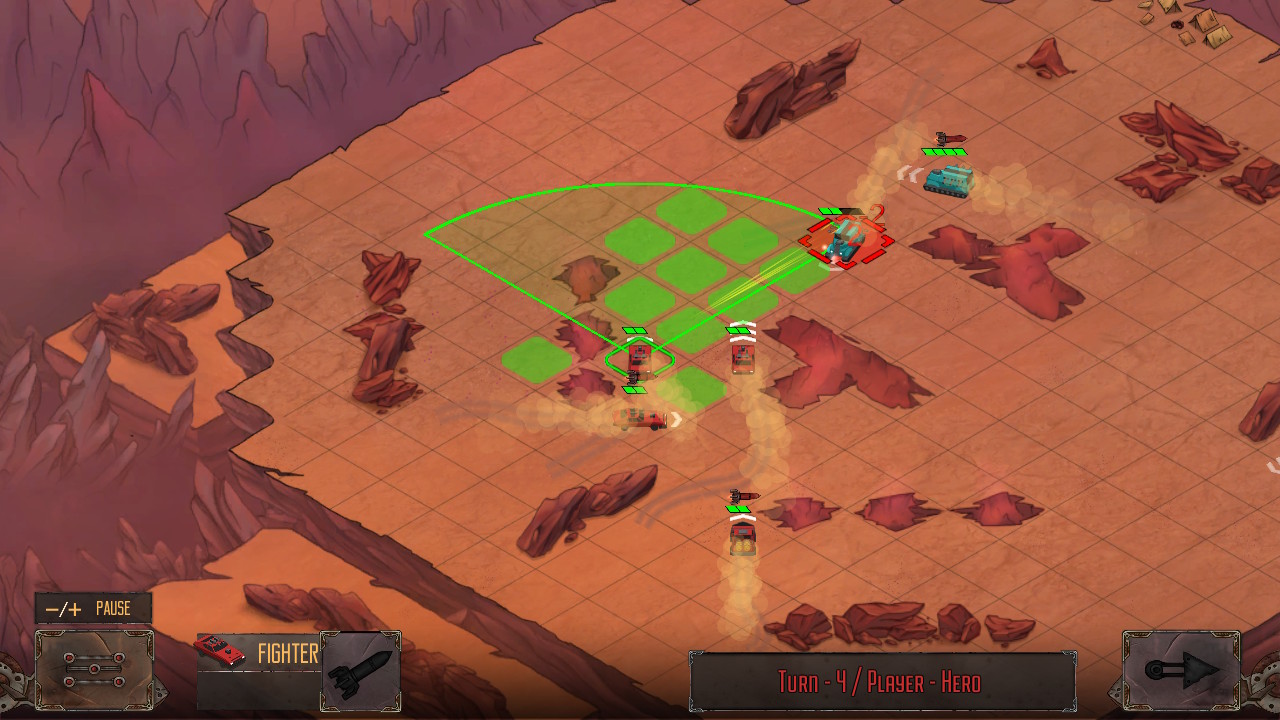 During the eighties, Mad Max became a bit of cult hero, scrambling over apocalyptic landscapes in his modified cars and battling scavengers in a fight for survival, fuel and the truth. However, it’s now been over thirty years since his films were released and I can’t seem to shake the image of him traversing the dusty plains in a souped up mobility scooter these days. So, maybe it’s time to move over Max and make room for a new hero in the shape of Mad Carnage, a Nintendo Switch title developed by Drageus Games and published by Qubic Games.

This turn-based strategy title sees you in the shoes of John Carnage, a wannabe hero who scrambles over apocalyptic landscapes in his modified cars and battles scavengers in a fight for survival, fuel and the truth. Sound familiar? That’s because it all is, in fact, you could even go as far as saying that the whole premise in the setting of this game is a direct carbon copy of the films that starred our original cult hero.

As far as strategy games go, Mad Carnage plays a very basic template within the genre as you control your car, or cars, around the desert plains on a battlefield of square grids. Objectively, you are mainly tasked with taking out all of the enemy vehicles before they turn you into a mangled wreck over a campaign of twenty levels and an extra eight levels of multiplayer mayhem. As you complete these stages, you acquire scrap gear which can be used in the garage to upgrade certain aspects of your vehicles; adding things such as movement, armour and firepower, but again, this is still very much within the reigns of a basic style of gameplay. 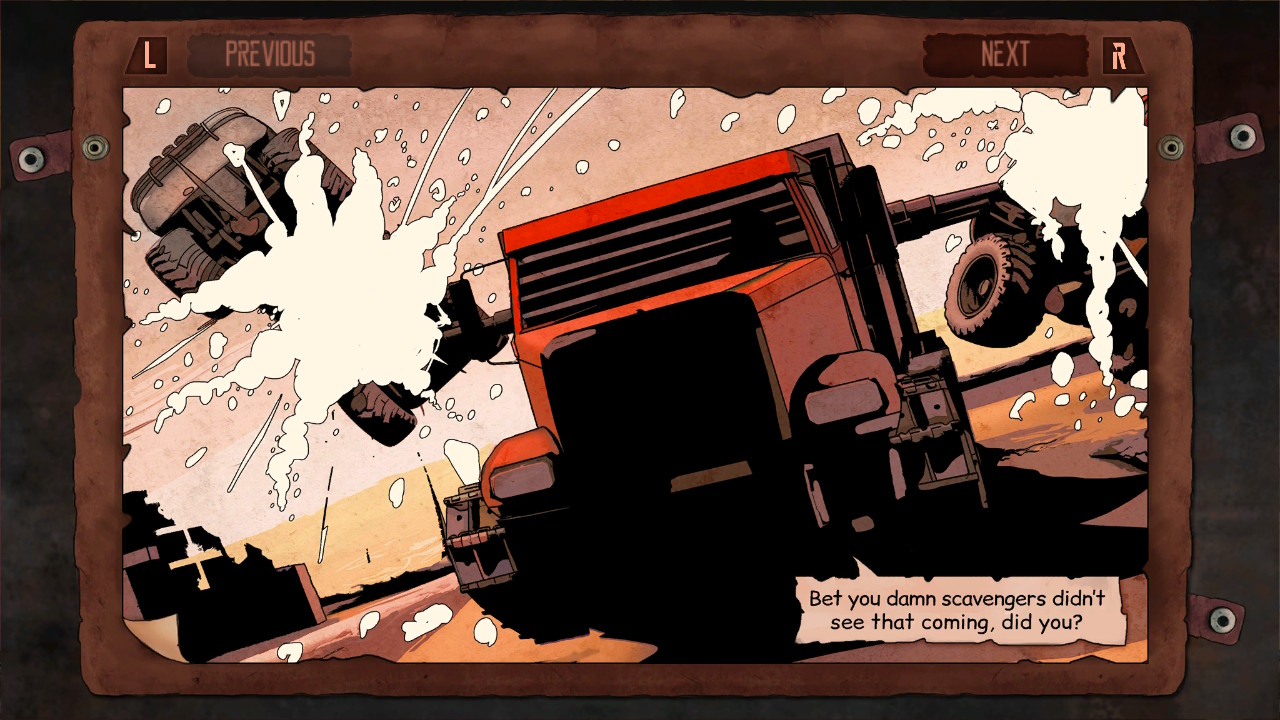 However, in order to try and bring something different to the game, the developers have incorporated a movement style that is based on the momentum of your vehicles. It works in such a way that the faster you accelerate your vehicle, the wider the arc of turning becomes. There is no immediate left or right turn here, instead you have to take into account your speed and the trajectory in which your car will travel when turning in a circle. Unfortunately, the game doesn’t make this apparently obvious when you begin playing, which can lead to some frustration in trying to control your vehicles, especially when you’ve been accustomed to a more immediate style of movement. It’s a clever little feature that adds to the strategic element of the gameplay. If you’re not careful, or plan ahead, you’ll soon find yourself crashing, or destroying, your allies’ cars or sending yourself head on into the wall of some ruins that litter the battlefield. This control scheme can result in some exciting cat and mouse chases across the desert and around the rocks and ruins of the landscape as you battle for supremacy.

As well as this element of strategic movement, you also have a variety in the style of vehicles you control. Some come equipped with guns and limited missiles, whilst others come equipped with a large, snow-plow-like grill that you can use to ram your enemies into submission. Although these produce a difference in how you approach each enemy vehicle, they don’t offer a variety in the mechanics of their movement; at least, I couldn’t notice anything different.

The storytelling component of Mad Carnage revolves around a presentation within a novelistic style, with large sections of written text, penned by Canadian writer Evan Currie, a best-selling science-fiction author. Despite a well-written and interesting storyline, the use of this form of storytelling feels a bit disjointed, as this is primarily a video game, and I suspect that most people will want to get on with the action rather than spend ten or twenty minutes reading the story. Of course, you can always invest yourself into the game by reading through these chapters, however, good characterisation is what ultimately makes a person invested in them and, unfortunately, Mad Carnage isn’t really that interesting as a character. 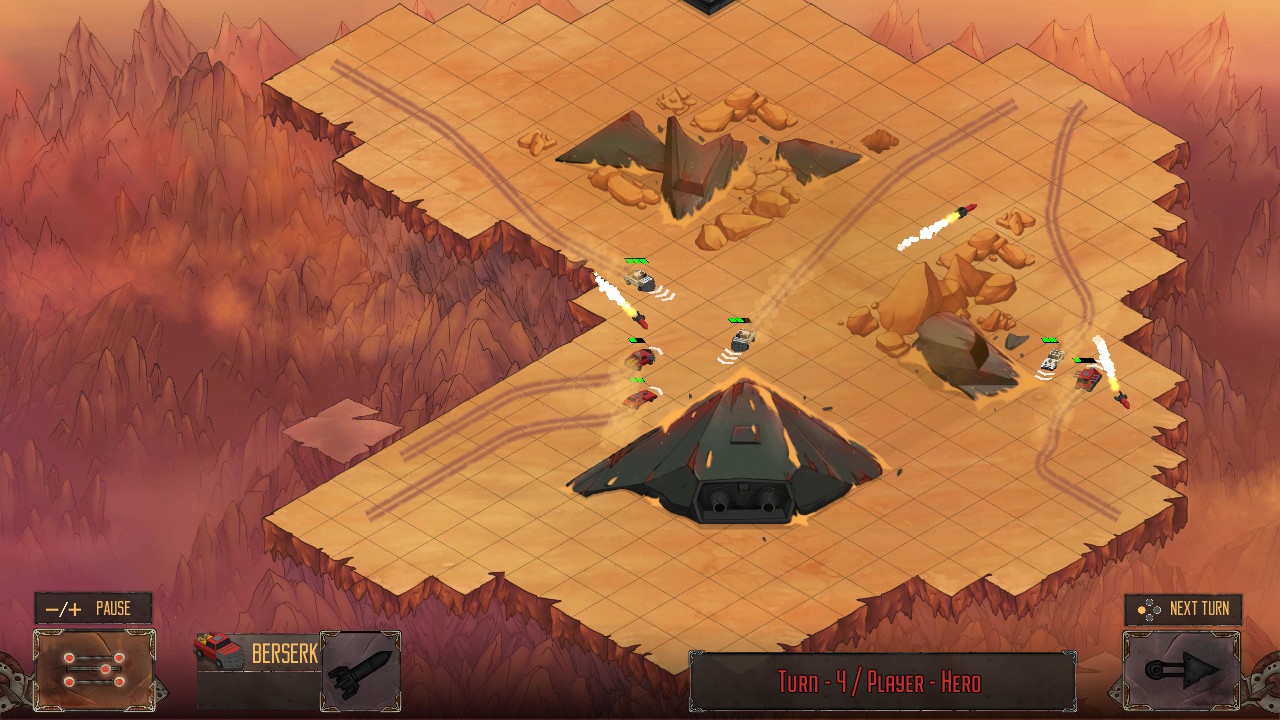 However, between each section of storytelling and gameplay, the game also gives a static storyboard in a comic book style that gives you a basic backstory as to what your next battle revolves around. These sections are nicely drawn and well presented, giving the game a certain degree of coolness; it’s just a shame that the developers didn’t opt to tell the whole story this way as it would have made the game far more interesting.

Graphically, Mad Carnage has a very basic look and feel to it. The main battlefield components have a cartoony, comic book style to them, another reason why the graphic novel would have been better suited for the story. Despite some scenery, such as rocks, ruined buildings and a scattering of remnants of what was the modern world, these areas of conflict still look rather barren. However, due to the style of the game, you wouldn’t really want a battlefield that was too crowded anyway. Because of the sandy, dust-strewn settings of the game, each level has a very ‘orange’ look about them that doesn’t change with its variety as you progress further. Ultimately, this leaves each level looking a bit samey throughout, leading to some repetition within the gameplay.

The audio elements of the game are adequate for the most part. Its musical score fits the theme well with its film score style, however the sound effects, such as engine noise and gunfire, are again, quite basic although they do serve their purpose. Despite the basic nature of its elements, Mad Carnage does offer a valid challenge in some of its levels and there are pockets of fun to be had throughout. However, because of the repetitiveness of its gameplay and similar looking landscapes, I’m not sure if it holds enough scope to warrant a return upon completion; despite it also having a local multiplayer option. It serves well as a casual game, or even for something to read on a long journey if you want to invest yourself in the game, but, despite its rocky scenery, it all just ends up feeling a bit flat. As I played through the game, I couldn’t help but think of Tina Turner’s film score for one of the Mad Max films; and as she quite rightly points out: ‘We don’t need another hero’.