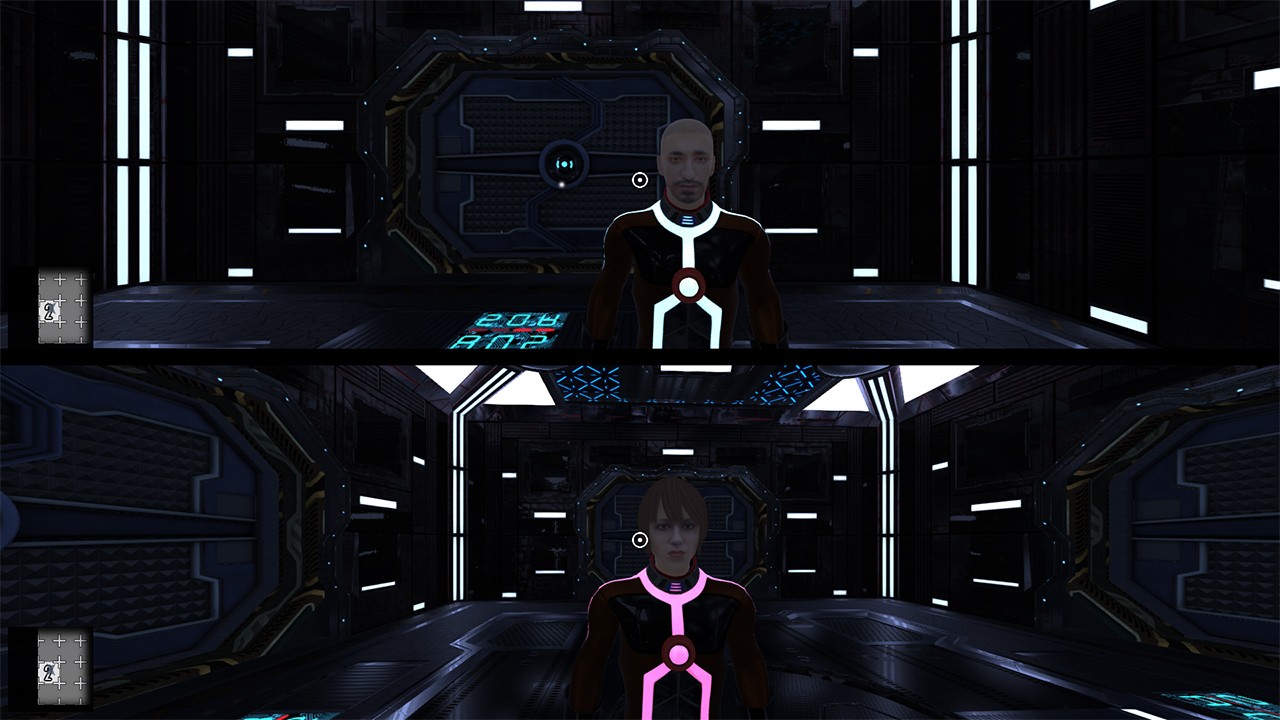 A console port of a Steam game released in 2016. Half Dead sees you as a lucky contestant in a twisted game show set in a presumably dystopian future. A simple enough game show, all the lucky victims need to do is navigate a maze whilst avoiding numerous death traps. Despite this exposition being given in the description, none of it really features in the game itself. It acts more like a first-person survival puzzle game, in the vein of Alien Isolation, Amnesia, etc, however relying less on a monster chasing you and focusing more on the puzzles. While this is very much not a gameshow you will want a play in real life, does Half Dead make it one you’d want to experience from your sofa?

Navigating the maze itself is a simple enough affair, although like an iceberg there is a lot underneath the surface. Whilst the controls are basic, revolving around moving, inspecting and throwing a boot. Yes, you read that right. Boot throwing is pivotal as it can activate traps in the next room in your place. There are two types of traps: room and door. Room traps come in a range of flavours such as rotating flamethrowers, floor spikes, etc.  Some lock you in if you enter, others you just need to dodge as you move around the room. Door traps on the other hand have just two flavours, either being a beam (of different varieties) shooting you, or something walking through the door. If you are unlucky enough to have something walkthrough, it will either be a skeleton (of different flame varieties) which slowly enters the room and if you touch it is instant death, while bombers will charge into the room and blow up. Bombers at least leave an extra boot for you. At first, the door traps are a pain as they can happen out of nowhere but once you know about them are too easily avoided by simply stepping aside. Additionally, the skeleton is nothing like Alien Isolation or the other survival horror games, as they don’t follow you around. Instead, they move very slightly forward (at a snail pace) then crumble… In fact, they are so easy to dodge that it feels like there should be more challenge and there isn’t.

Half Dead is very much a steep learning curve, like Dark Souls, where experience is everything. Also, there is some luck involved as beginning the level with 2 boots can be a pain if you instantly find 2 lock-in rooms. Losing the trap finders early on is a huge blow, requiring luck to find either a bomber or the exit. Not only that, throwing them at skeletons causes them to be lost which is frustrating as it doesn’t even defeat them. No need to despair though, if you have progressed far enough there is a way around this! In Minesweeper fashion, the bottom left of the screen has a map with a number in each room. This number tells you how many trap rooms are linked to it. It gives you so much space to think logically where the next safe room is. Really, this is where Half Dead gets fun. Unfortunately, you can’t see a larger version of the map in a pause menu or anything. Sure it creates a challenge, yet it might as well show you the whole thing… Still, despite having the map to use, there is a bit too much luck involved and puzzles really difficulty spike when you lose both boots at the start. 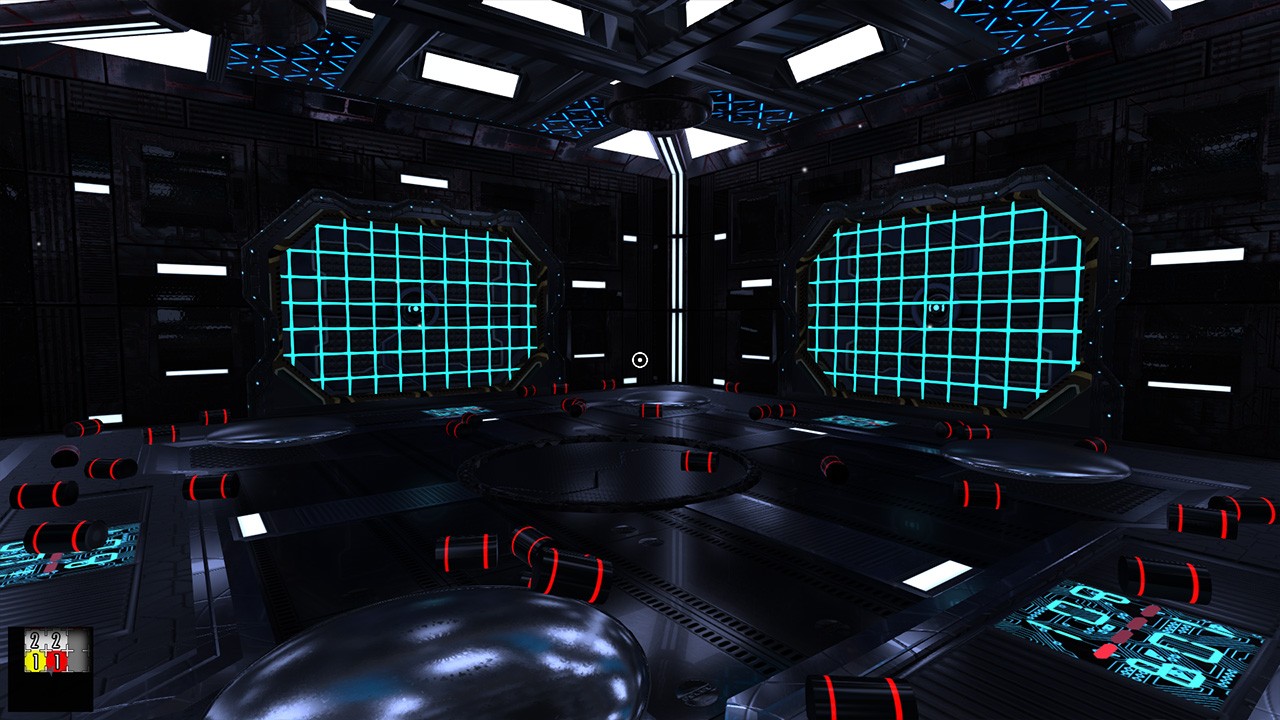 While the core aim of Half Dead is to find the exit to the maze, there are various modes to mix it up. There are a standard random entrance and exit mode, another purely getting from one corner to another. Timed modes are also available, either to reach the end in a set time or explore a new room every minute. If that wasn’t enough, there is also a hardcore mode with no map. These work well to mix it up, creating a range of challenges for you to enjoy in custom mode. Co-op play does add to the experience and can be a laugh as decide to either work together or compete against each other. However, just make sure you use two pairs of joy-cons as the game doesn’t seem to work with USB and Pro controllers.

Moving to the visuals, the rooms themselves are quite good. They utilise a lot of textures and good lighting to create a space station atmosphere. Traps, on the other hand, look a bit out of place. While there are different varieties, a lot of it is just the same trap but different colours like the aforementioned beam-like ones… Spikes are probably the best looking trap but really there isn’t much substance in the different traps and they have an underwhelming presence. Because the game is in the first person when you die all you see is blood cover the screen. If there were diverse death screens, showing the different ways of dying, it would add to the horror as without it there is just a detached feeling. Even adding deranged audience reactions to it, linking into game show, will give the deaths more of an impact. Surprisingly, what looks more out of place are the character models. The player, and other contestants, look like a previous-gen game at best. Sure the game was on Steam in 2016, yet a little update on the models would have been nice. 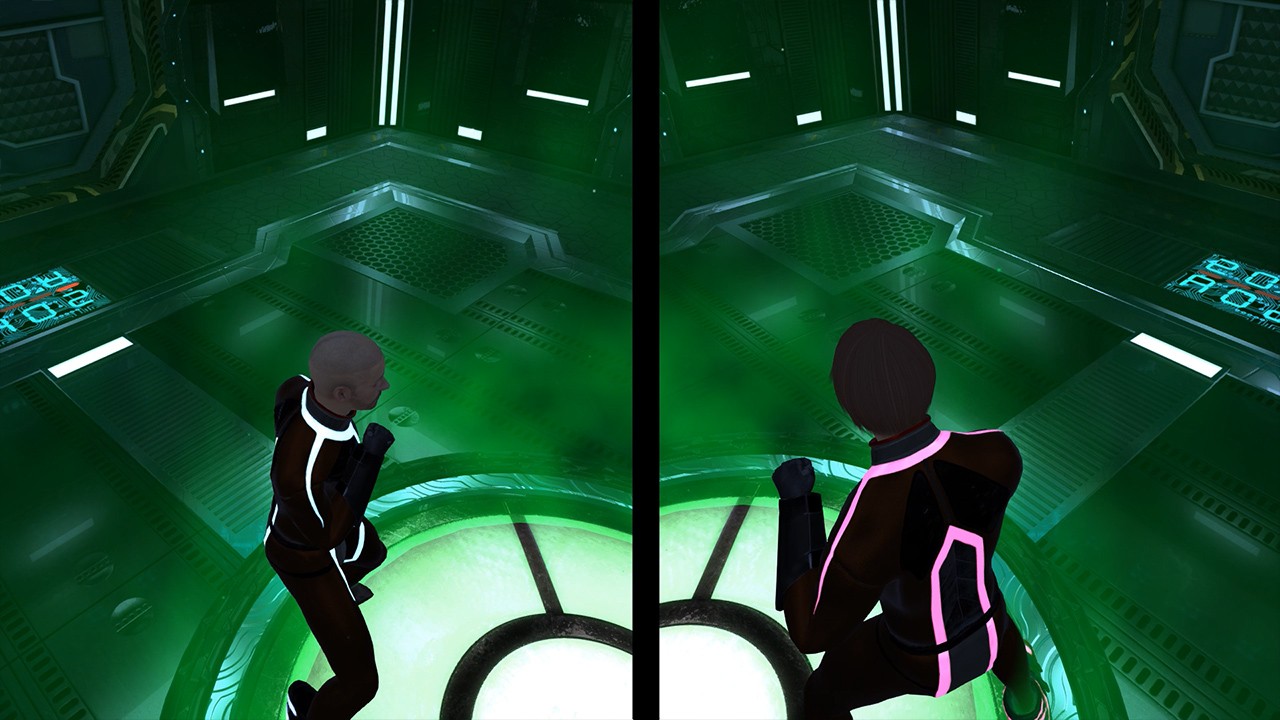 I left the talking about the audio until the end as it just escaped my mind completely as it is largely missing. At first, I thought it was to create suspense but all it really creates is emptiness. Sound effects don’t fare much better, for example, the flames of the skeleton come through really loud even if you are far away from them. Yeah, some are passable, such as the squishing from the traps and muttering from the random contestants who have seemingly gone mad, but this still doesn’t stop the game feeling empty. Some dissonance or even game show music playing with a twisted fashion would have gone a long way to inject some life into it. As a whole, the sound design causes too much disorientation for it to be enjoyable.

Really, it summarises the main issue with Half Dead. It is too empty. The audio matched with the lack of cutscenes (text or otherwise) mentioned at the start, it just feels half-baked. Why create this backstory of a game show if it doesn’t feed into the game itself? Particularly after finding the exit, all you’re rewarded with is a dull menu screen and music. Given the context, why isn’t there a crowd reaction or even a victory jingle? It is these little things that are missing that make the experience feel incomplete.

Half Dead feels more half empty. An interesting puzzle maze game for sure, the lack of sound and plot from the game description makes it all feel a bit barebones. Still, if you enjoy puzzle games this will be up your street.