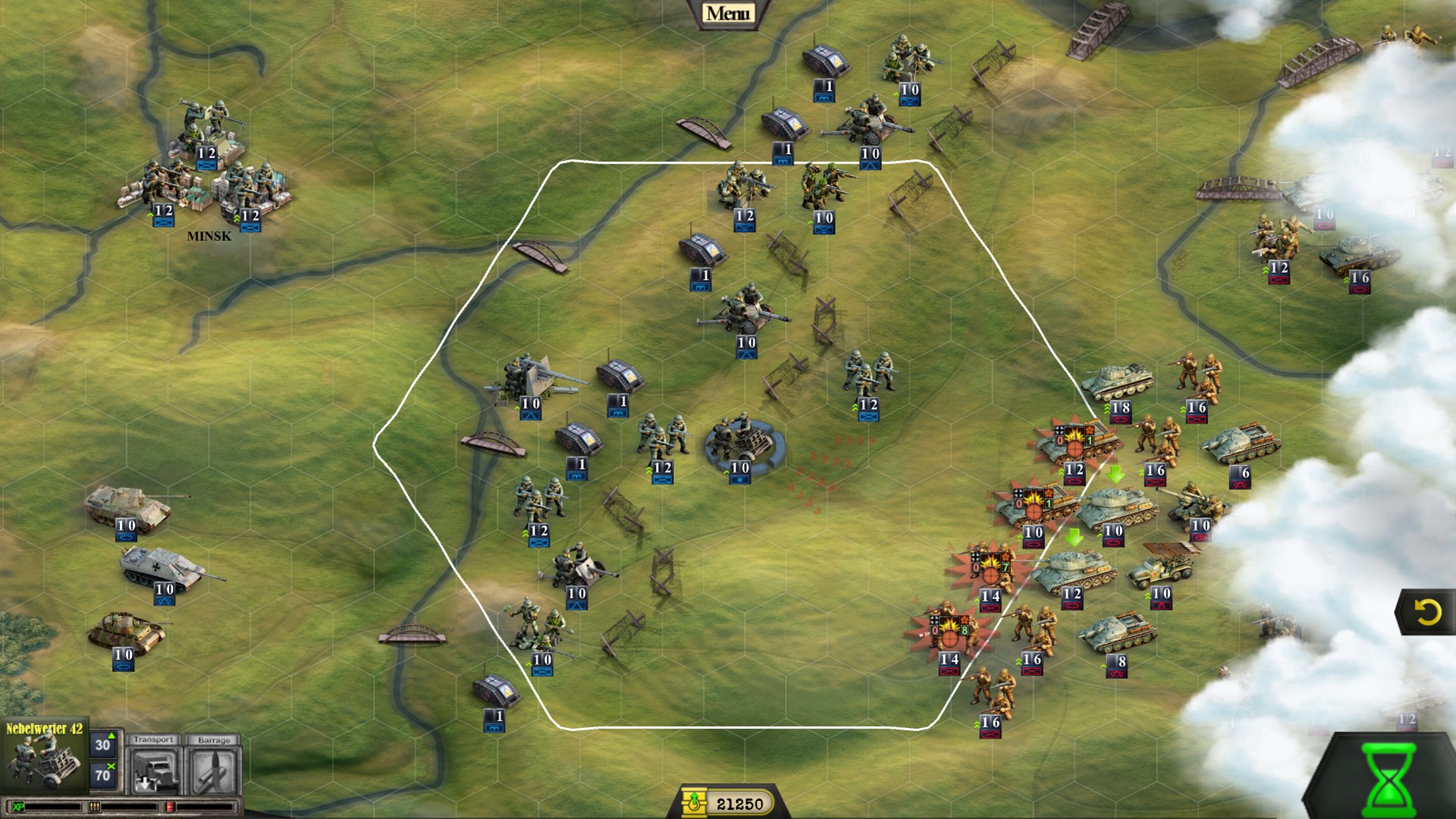 For the casual armchair war enthusiast, Frontline: Panzer Blitzkrieg! gets a lot of things right in its effort to cover a whole bunch of Eastern Front battles. What’s more, it’s a turn-based tactical strategy game that puts you in the shoes of the German commanders for a pleasant change of pace, and is actually quite a lot of fun, too.

Covering over 35 battles as the Germans try to move on Russia (plus several bonus battles), the game is designed to be played as a complete campaign, and it walks you slowly through the basics of movement, targeting the fog of war, how battle stats work, etc. before passing onto slightly trickier gameplay aspects: recruitment, supply, reinforcements, unit experience and improvements, and so on. There’s also a handy set of hints’n’tips that you can scroll your way through before each battle, and these do a good job of explaining how some things work as new concepts are introduced.

I must admit, I struggled with the interface initially, purely because the game seems tailored for players who are already familiar with the Frontline series, but it didn’t take too long to find my way round, and once I did so, falling into the role of armchair commander proved quite relaxing. I found it easy enough to dive in, play a battle or two, and then get on with my day. Most battles take about 20-30 mins (the later and harder ones, possibly a bit longer), but yes, that does literally mean you spend that time pushing units around a board of hexes and making strategic and tactical choices of where to go and what to attack before passing over to the AI. 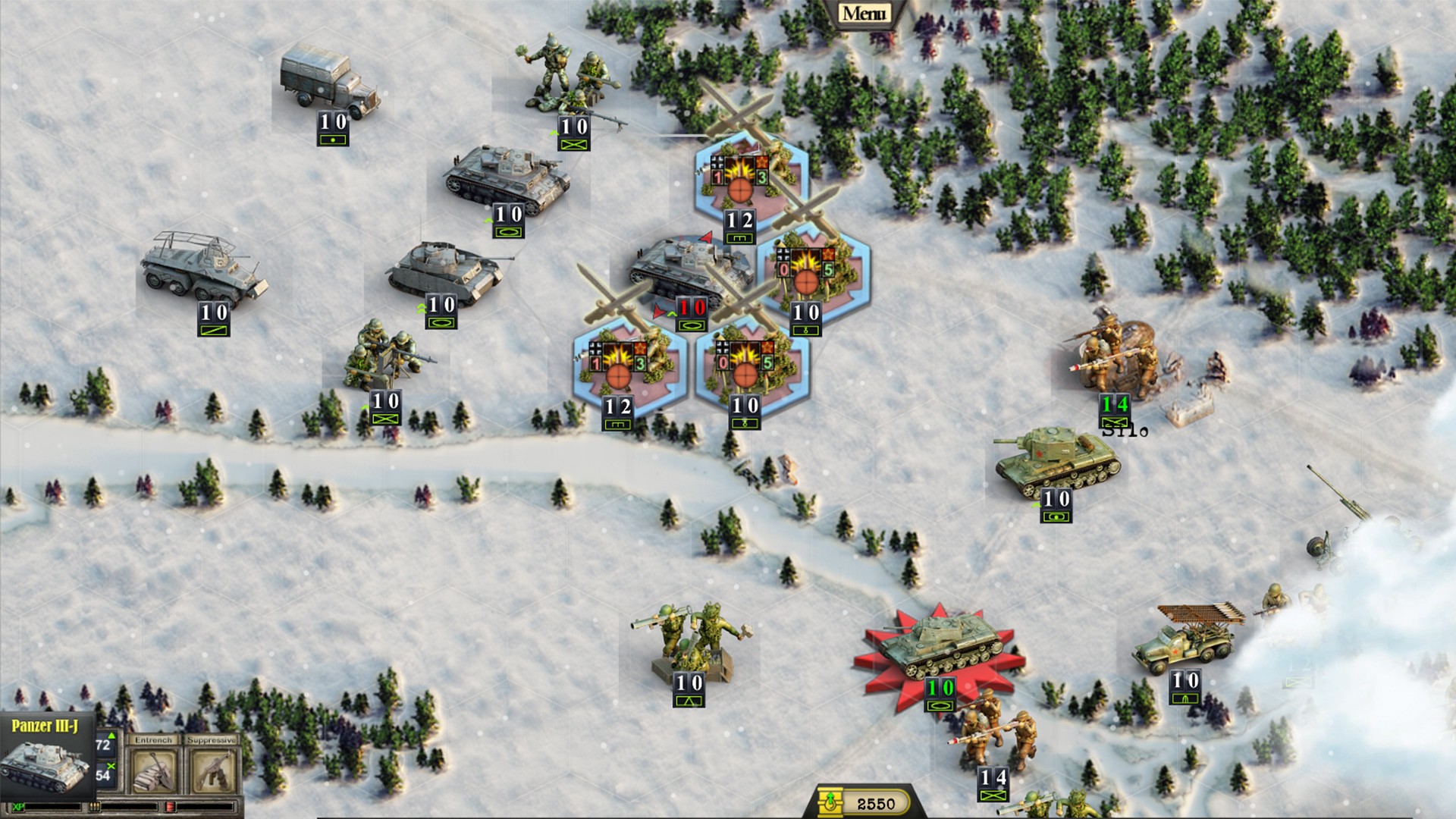 The AI of the USSR troops is pretty decent so it can surprise you a few times, and because some units can deflect hits, dodge them, and counter-attack regularly, it’s certainly not always a stroll in the park, especially if you’ve squandered your Resources/Support too soon and lost too many units to come out on top. I never actually started losing everything in any battle, so purely in the name of research I deliberately did so — I got my units killed and spent all my resources, just to see what would happen — and unfortunately the game doesn’t respond so well to this, and will quite happily sit there and wait for you to take your turn or end your turn even when you’ve nothing left to fight with! Your only option at this point is usually to call up the Menu and restart or resign the battle. That quibble aside, each individual battle comes with 3 objectives, and your performance is rated based on how many of these you can achieve. Needless to say, failure to achieve any of them was often grounds to consider restarting the scenario again, but you can return to any battles at any time to play them again once they’re ‘unlocked’ (there’s a set path of progression which branches off in various directions, depending on which battles you take on). There is also a suite of Bonus Battle Maps.

The attention to detail and the multitude of different units would no doubt whet the appetite of more serious wargamers (the differences between a Panzer III-L and a III-J, for example, or the variety of Panzer IV models and other units available), but if I’m being honest a lot of this went over my head, and I looked at the units through a simpler lens: are they better at fighting Infantry, Artillery, or Armor? How many Hit Points do they get, and what Movement/Range do they have, etc.

The addition of Airstrikes (which can get shot down before acting), and a couple of battles that were built primarily around Air-to-Air combat are also a nice bonus, and make for a pleasant change of pace, too. 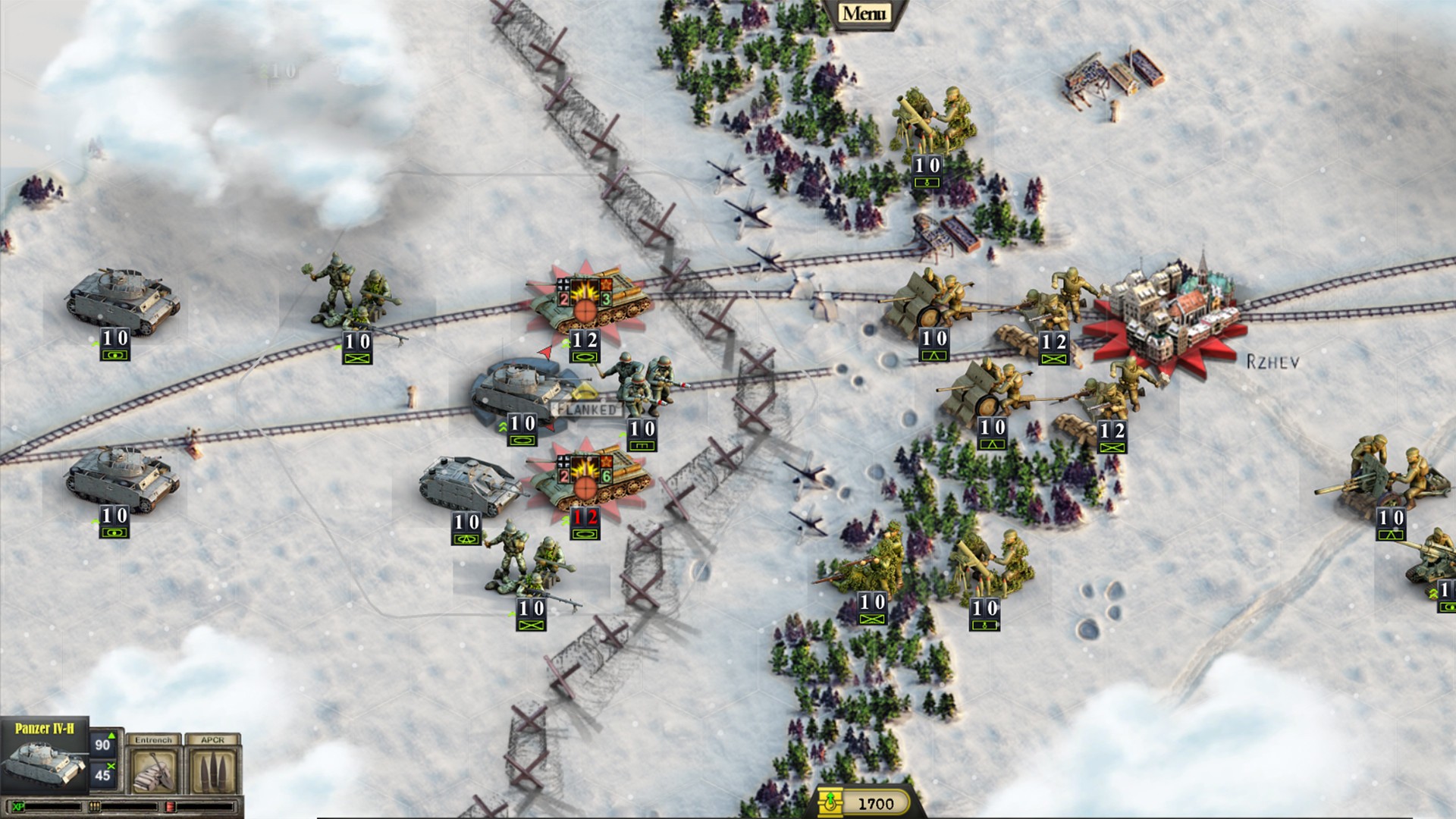 The board gamer in me also really liked the way the maps are represented: zoom out far enough and it looks like the theatre of war is taking place on a scrap of paper which even has “No. 3” scrawled onto it (this is the third in the series), complete with fog of war and floating clouds drifting off the page – a nice touch which adds nothing to the gameplay, admittedly, but still worth mentioning I thought. The graphics are nothing to get excited over, to be sure, but they’re functional, and if you zoom in close enough, the detail on the individual units is actually very impressive.

With a huge variety of battle maps to partake in, a whole load of different and individual units to play with, and plenty of development still going on (Frontline is a solo venture, and there seem to be new maps appearing regularly), it’s easy to recommend this game. It can be had for less than £5 on offer, but even the full price is just a few quid more than that, and it’s certainly cheaper than buying a boxed wargame and trying to find someone else to play against, and unlike a boxed game, you’ll definitely be able to get loads of games in without relying on anyone else. Fantastic value for money.

For the casual armchair war enthusiast, Frontline: Panzer Blitzkrieg! gets a lot of things right in its effort to cover a whole bunch of Eastern Front battles. What’s more, it’s a turn-based tactical strategy game that puts you in the shoes of the German commanders for a pleasant change of pace, and is actually quite a lot of fun, too. It’s like owning an expensive, boxed wargame, and having a ready and willing opponent 24/7.