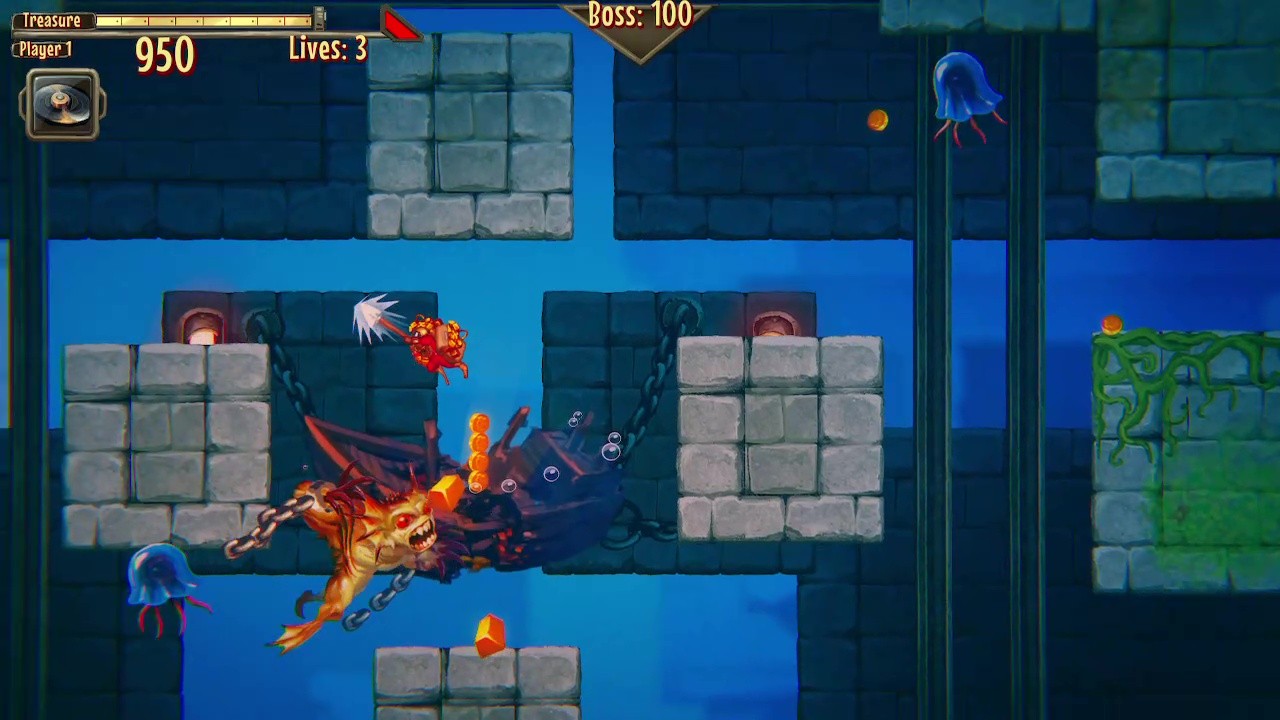 Couch play titles are one of my most frequently played genres on the Switch – not because I like them so much, but because the platform is full of these titles, and, considering the portability and all, it makes sense. Equally, these games are usually indie titles with relatively low budgets and pixel art graphics. Aqua Lungers ticks the boxes for what can be expected of couch play, but it could be argued that the visuals are much better than it’s peers.

Appearance isn’t everything in a game, but the hand-drawn style of the character you play, the enemies and scenery are all brilliant. Again, like most couch play titles, the assets on-screen are relatively small – to accommodate the number of players involved, but also to be able to see where to go next. An immediate highlight of the game is how clear everything is. There’s no confusion on where to go, where the enemies are and what you need to do. Then again, the premise is pretty simple: collect the set amount of loot without losing all your lives and move on to the next level. 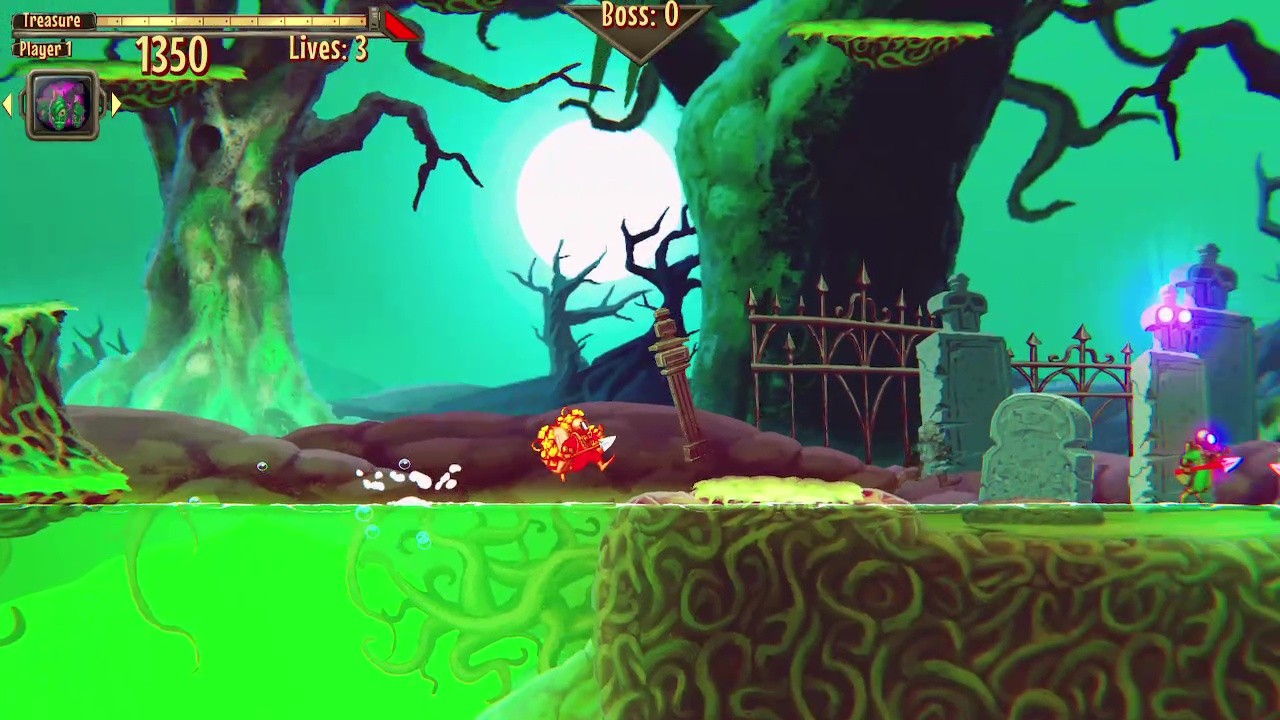 Initially, the game difficulty was insane. Not because it was so hard, but the complete opposite. Within a short space of time, I’d managed to complete the first world, granted, as a solo effort, without losing many lives. At the start of the round, you take your ‘lunger’ with their spear in hand, then dive to the lower depths to stab at some shipwrecks, fill your boots with gold, then return to the surface to stash it away. Swimming about is easy enough as you can press B to speed up in the water with the Y button to attack your enemies. If you are attacked, some of your treasure drops and if you die, you have to go back to retrieve it all. In the beginning, the enemies are super easy and can be killed with a couple of pokes, but each round features a boss that swims around from the outset. They can’t be defeated, but you can stun them with your spear, or even get one of the handfuls of power-ups scattered around the levels, with occasional drops too.

Once you get to the end of the world (panic!), you have to take on the boss. Now, this is where the difficulty creeps up as they can one-shot you with projectiles. My first attempt was a bit in vain, and I clumsily rushed the boss only to get wiped out twice by their ranged attack, and the third by one of the fish minions swimming about. Without realising, on the surface were a couple of power-ups which offered a protective bubble (until hit), so this allowed for some frantic button-bashing then rinsing and repeating. The challenge came just at the right time as my interest was starting to wane a bit. Thankfully, the subsequent levels offered a good deal of difficulty too, but the one-shot hits from the bosses (on every level!) got a little frustrating.

With the solo mode, you mainly have to get the set amount of treasure to complete the round. There’s no time limit, but you only get a few lives to play with, and the boss in each round is steadily collecting treasure too. For local play that is up to four players, it’s the same setup; only you can work together to collect the loot, or team up and race to get 3000 points before the others do. ‘Friendly-fire’ is involved, and while it’s not evident that you can kill another play, you can give them a poke with your spear, and they’ll drop some of the gold they’re holding. This can be a good tactic to steal it from them, or if playing against them in a team, slow them down. All while any of this assumed in-house fighting is going on, the enemies in the game still exist and can take back the treasure and also kill you. 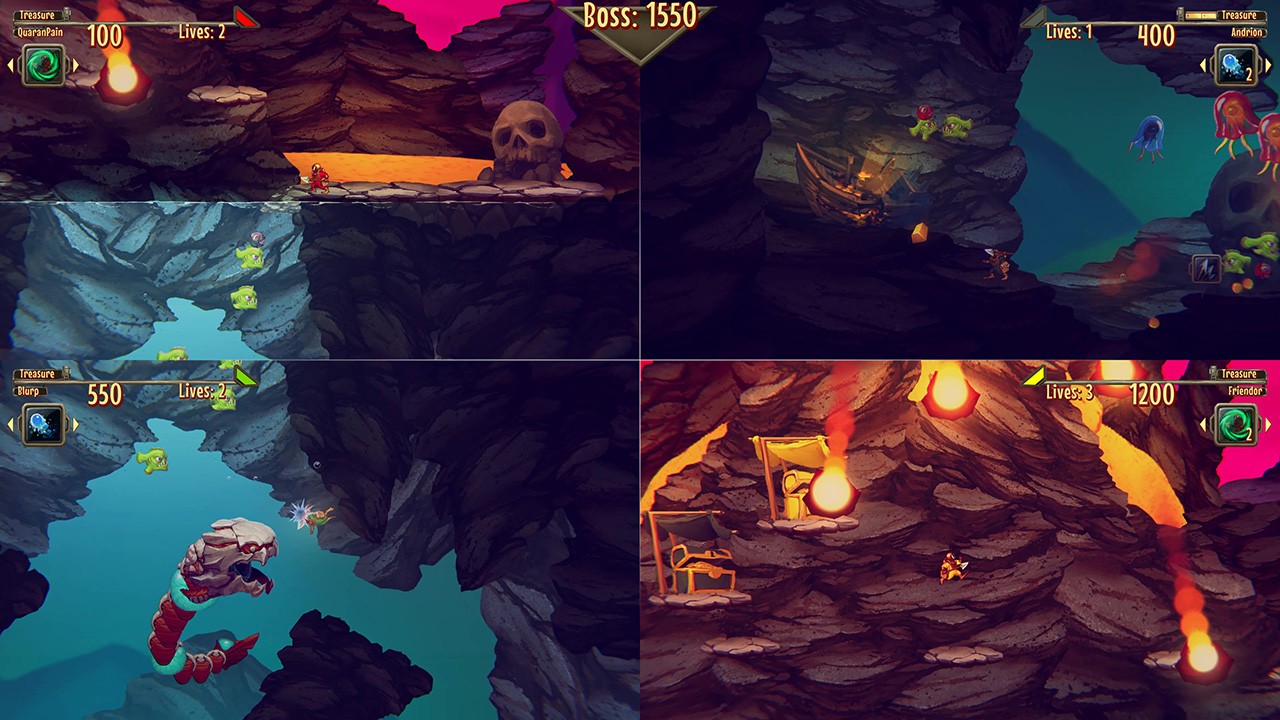 The stages vary from the classic nautical theme through to the desert and ice vistas. You aren’t restricted to fighting underwater as the second world has a lot of turtle enemies that can traverse the rocky terrains and small coves of water. Attacking the enemy isn’t exciting. There are a few power-ups as mentioned, but it usually a case of holding the direction of your would-be attacker and spamming the Y button for melee combat. You can also hold the button down longer, and this will generate a charged attack which is useful against the lesser enemies, for stunning the boss, but also for knocking obstacles out of your way too. It’s not limited, nor is there any cooldown, so it breaks up the monotony of button mashing.

Aqua Lungers has been a surprising game. The controls and action are very easy to get accustomed too, but the frequent deaths from the boss attacks can prove a little too frustrating – especially when you’ve painstakingly raided numerous ships to get closer to the goal. The graphics are a definite highlight, and the animation is great. It’s neither pixel art or the standard Flash-like style, but somewhere in-between. Some of the music pieces were a bit uplifting, while others were a bit grating, so a little hit and miss in the sound department, but nothing too off-putting. In summary, though, Aqua Lungers doesn’t bring anything new to the table as such, but what it does bring is a more stable party game (pending you’re not teamed up with “that player” who thinks it’s funny to attack their teammate).

In a world full of couch play titles, Aqua Lungers isn’t going to blow the competition out of the water, but it sails above the norm, and worth looking at if you want the option to play solo or locally with three other players.