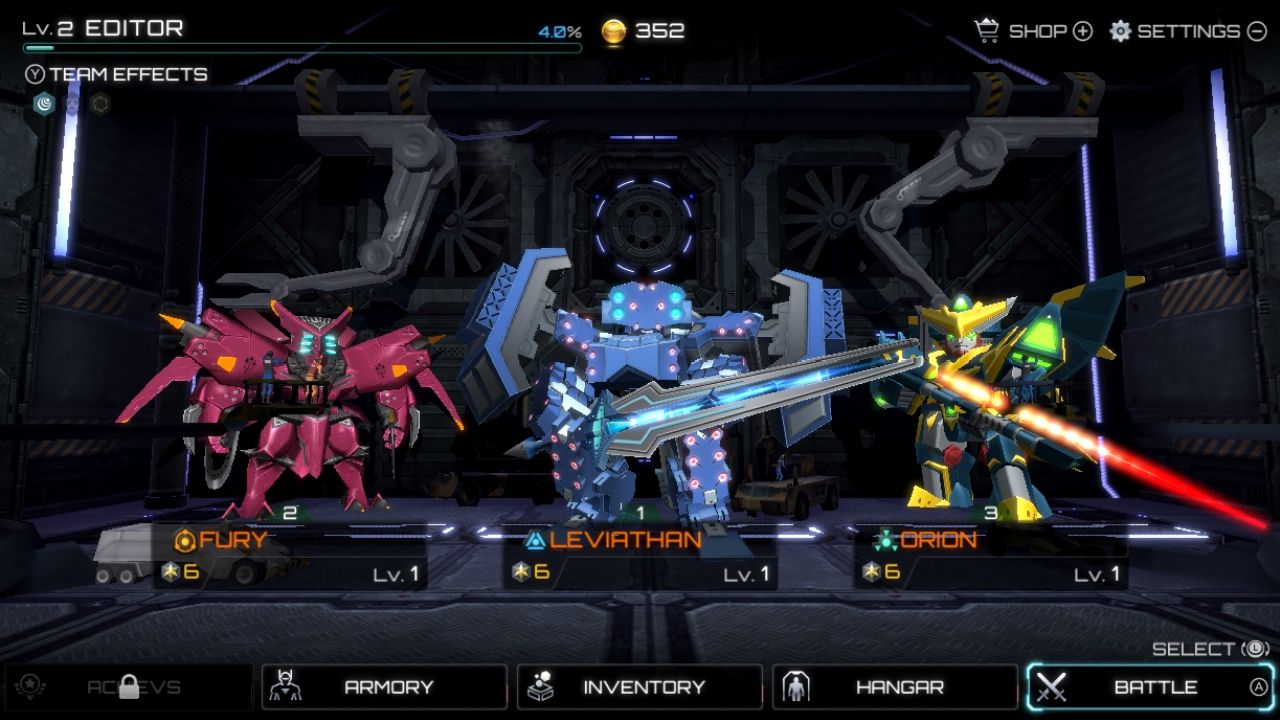 When it comes to armoured, mechanical suits, or Mechs, you instantly conjure up images of massive robotic forms capable of dealing huge amounts of damage and possessing a number of abilities that can turn the tide of any war. Take Transformers or Xenoblade Chronicles X’s Skellsfor instance, their forms are instantly recognisable and scales truly formidable. Due to this, it can’t be denied that the concept of Mech-driven entertainment has developed a solid fan-base in both young and old alike. The latest video game to incorporate such machines comes in the form Mecha Storm, an iOS/Android game that is gaining console exclusivity upon the Nintendo Switch.

Developed and published by ENP Games, this title charts the start of an intergalactic war between two factions of mech-controlled armies. Taking place over a series of planets, including Earth and more distinctly alien varieties, each one hosts a series of levels that see you fighting within a series of stances that incorporates close-combat melee, mid-range skirmishes and long-range shooting. With a variety of missions to complete, ranging from clearing the area of all hostiles to protecting certain utilities, you’ll find yourself hacking, slashing and dodging your way through more than fifty levels of mechanised mayhem.

With each victory, you can unlock a variety of functions to further boost your fighting prowess. The first of these is the ability to create a fire-team, where you can take up to three mechs into battle; each one utilising various techniques and boosts to help complement each other. Successful missions also awards various upgrades in the form of weaponry, mobilizers, skills and cores; all of which you can attach to your mechs to further strengthen their capabilities. It all adds to give the game some depth in the personalisation of each module and a variety of options in how you shape your fire-team. 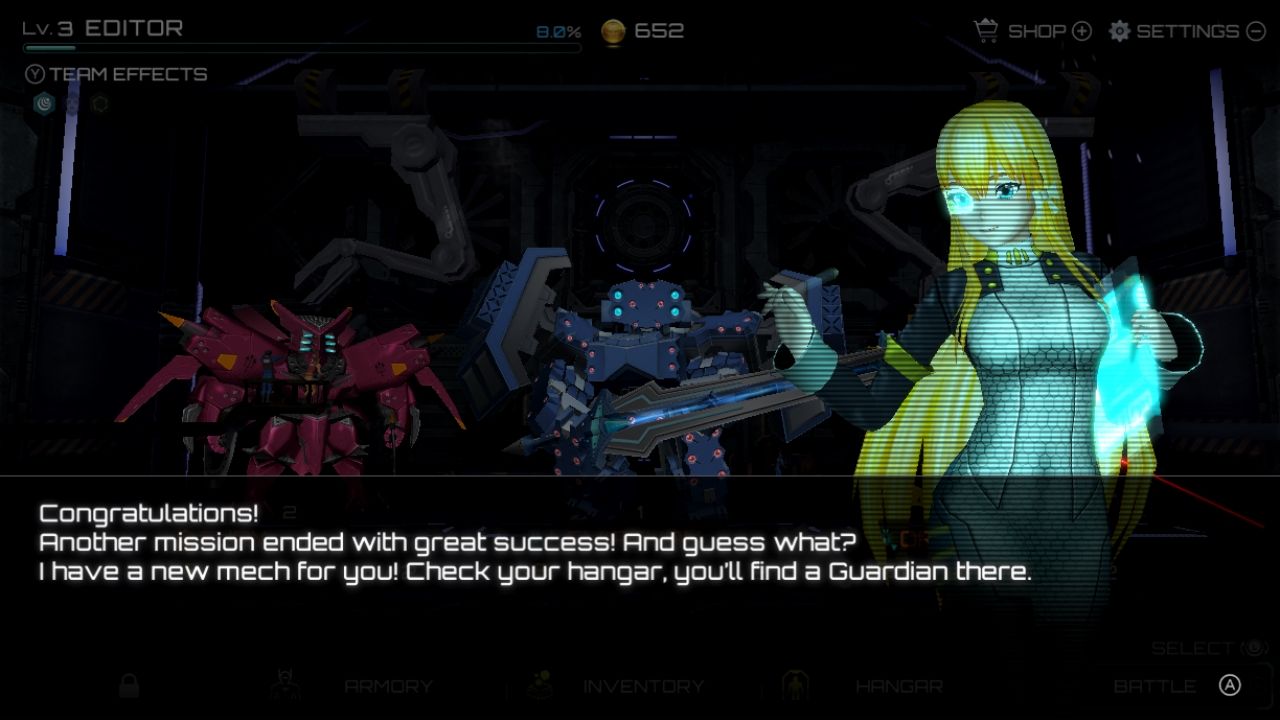 There are three varieties of Mechs that you can choose from: Scouts, Brawlers and Guardians; with each class housing around fifteen or so variants of mech units. Scouts are fast and nimble warriors that utilize their manoeuvrability in order to traverse the battlefields quickly, Brawlers are the tanks of the group being slow and cumbersome, yet providing massive amounts of damage with their attacks and Guardians which are armoured powerhouses. There’s a nice variety of options here that allows a lot of freedom in equipping a team that suits your play-style which, in theory, should provide a satisfactory backdrop for the main staple of the game. However, unfortunately, it is here that the nuts and bolts of the mechs quickly falls apart.

The main combat element of the gameplay involves completing certain missions on a variety of planetside battles. However, once deployed, you are presented with a linear path that takes you through a series of bland locations that look dreary in their presentation and devoid of all life. Although equipped with a fire-team of three mechs, you can only use one at a time. This mechanic acts as a form of lives, as if you fall dangerously low on health in one mech, by pressing ZL and X or B, you can swap to another class, whilst your previous mech slowly recovers its health. It seems quite a sound mechanic, but in reality it feels cumbersome with no tactical element involved in any of its gameplay.

Combat is utilised in a number of way, as is movement control. The left thumb-stick directs your mech while pressing A forces your mech to attack. Whilst you can swing, or fire, by tapping the aforementioned button, you can also just keep your finger depressed as your mech boosts from foe to foe as it slices, dices and shoots its way through the level. Again, it sounds like a nice idea, but ultimately just leads to you keeping your finger on the A button as your mech attacks everything in sight. There are special abilities and boosts that can be utilised by pressing the Y or B buttons, but there’s nothing spectacular here or particularly battle-turning in its power and function. Dodging can be performed with the R shoulder button and the hit-and-miss mechanic of selecting enemy units to target with the L variety. 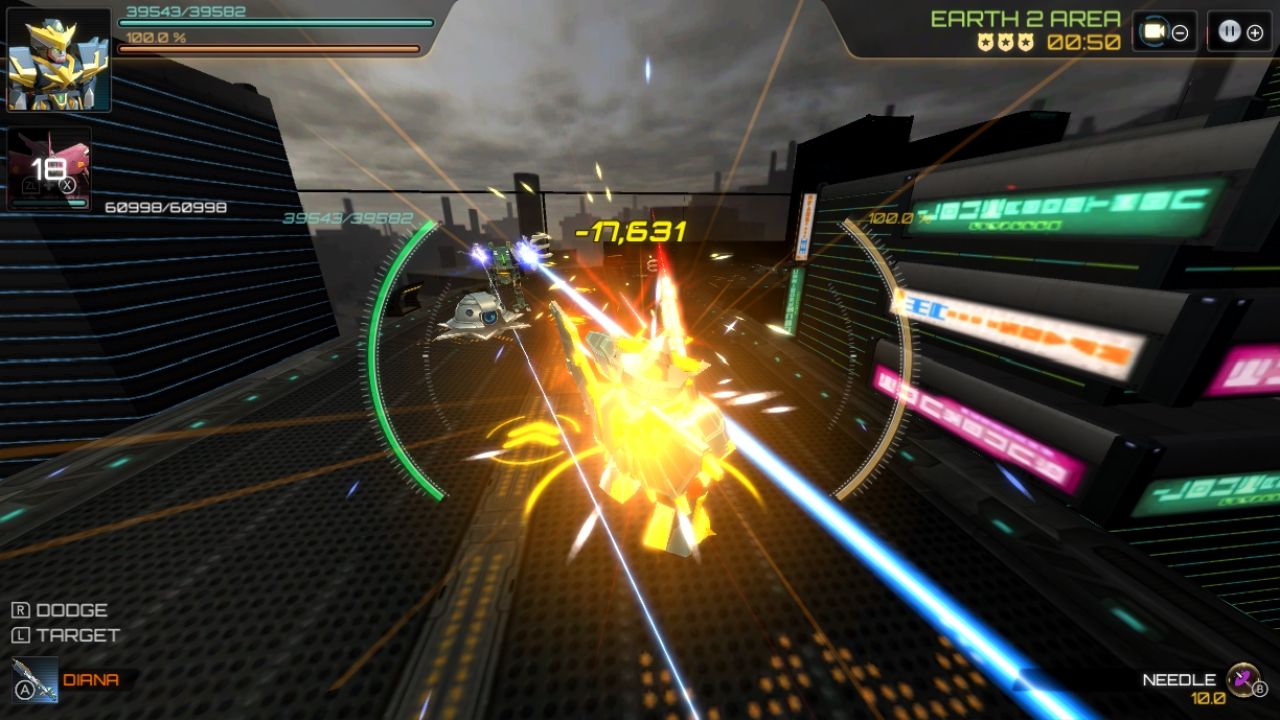 This all ultimately adds to a feeling of lacklustre levelling and battling in its mechanics; especially when paired with the monotony of its level design. There’s no freedom to explore or make tactical approaches, you simply follow a set path, or road and try to eliminate all opposing foes before they destroy you. It’s a shame as there is potential here, it’s just that the whole mechanic of the game isn’t particularly well designed, implemented or executed.

I also found the main stars of the show, the mechs, to be largely underwhelming in their aesthetics and feel. Although they are designed to be large, hulking beasts, they simply end up feeling rather toy-like; often reminding me of the old plastic Transformer toys from the late eighties. To try to gauge a feeling of their size, various vehicles drive around their feet, with an awful collision detection that sees them drive straight through you, but again, these look distinctly toy-like in their look and presentation. It all adds to an air of unbelievability in the size, scale and power of each of the mechs.

Overall, Mecha Storm feels too much like a mobile game, rather than a console one. Its nature is too simplistic in its controls, appearance, levels and gameplay. You do encounter some boss battles, but their attack patterns are too easy to work out which leaves you with a dodge, attack, dodge mechanic that soon wears thin. Despite offering various locales with fighting across the galaxy, each of the levels look bland in their appearance with no background interaction or movement to give the level any sign of life. For a galactic battle of this scale, apart from the road or path you are on, everything else seems rather quiet; again, taking away any immersion or believability in what you are playing. Although it pains me to say it, this is a game that should be avoided. However, if you are a real die-hard mech fan, then you may find something to enjoy here, but for me, this was more of a shower than a storm.