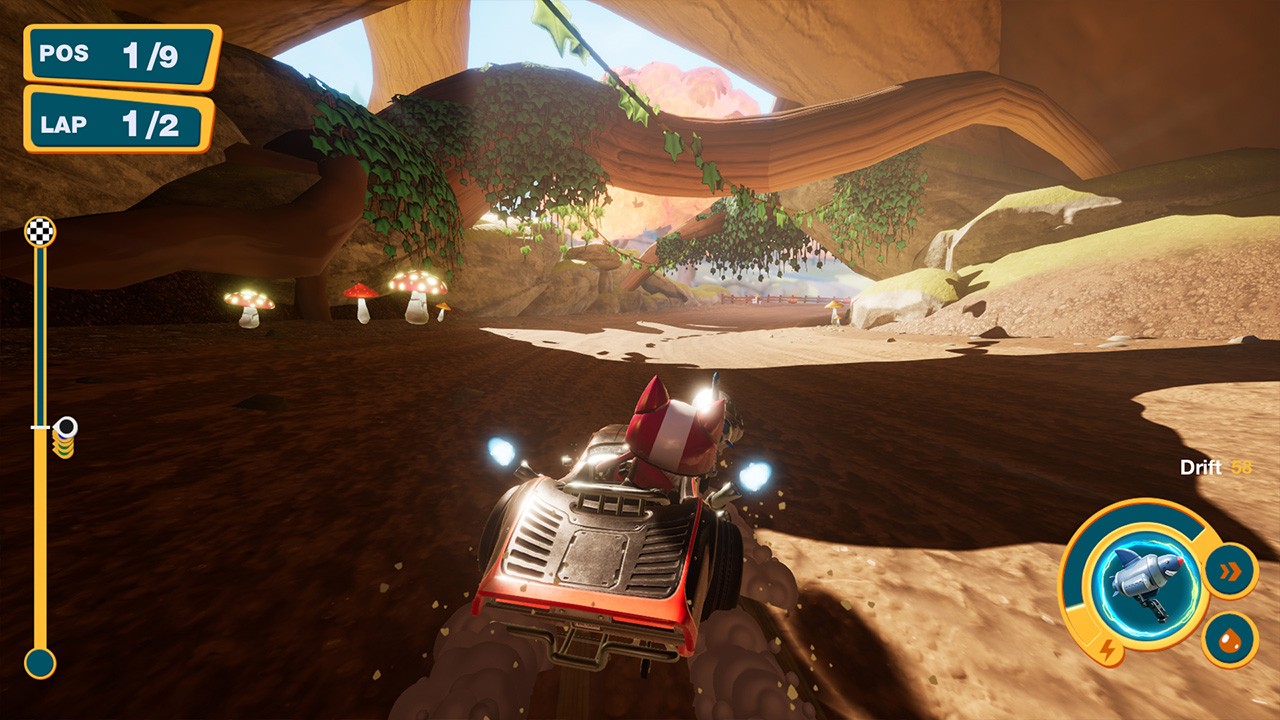 Whether you’re a Gran Turismo fan, Mario Kart or fond of a little bit of the DiRT series, racing games – in whatever form, are here to stay. As a fan of all driving games, including bus simulators, Meow Motors looked like a fun little run-about-town type of game.

For once, my gut instincts proved right, and Meow Motors is a lot of fun. Very much in the mould of the Mario Kart series or even Crash Team Racing Nitro-Fueled, racers battle it out with anthropomorphic cats looking to steal a win by firing a shark missile at one another. Not a typo.

Compared to Mario Kart (which will happen a lot here), there’s a mild story to Meow Motors. In the story, you play as Rocky – a typical motoring feline who happens to go head-to-head without a baddie sort who’s willing to take risks. After flipping out, said evil type takes your helmet as a trophy. Undeterred, Rocky strives to fight on.

The story is pretty light and told in comic book panels without any voice acting, but it’s not required as Meow Motors holds its own against similar titles. The game is a conventional setup where you play a track and can win up to three stars that go towards unlocking new tracks, power-up, extra vehicles and an assortment of characters. Stars are awarded for where you place in a race and your score. 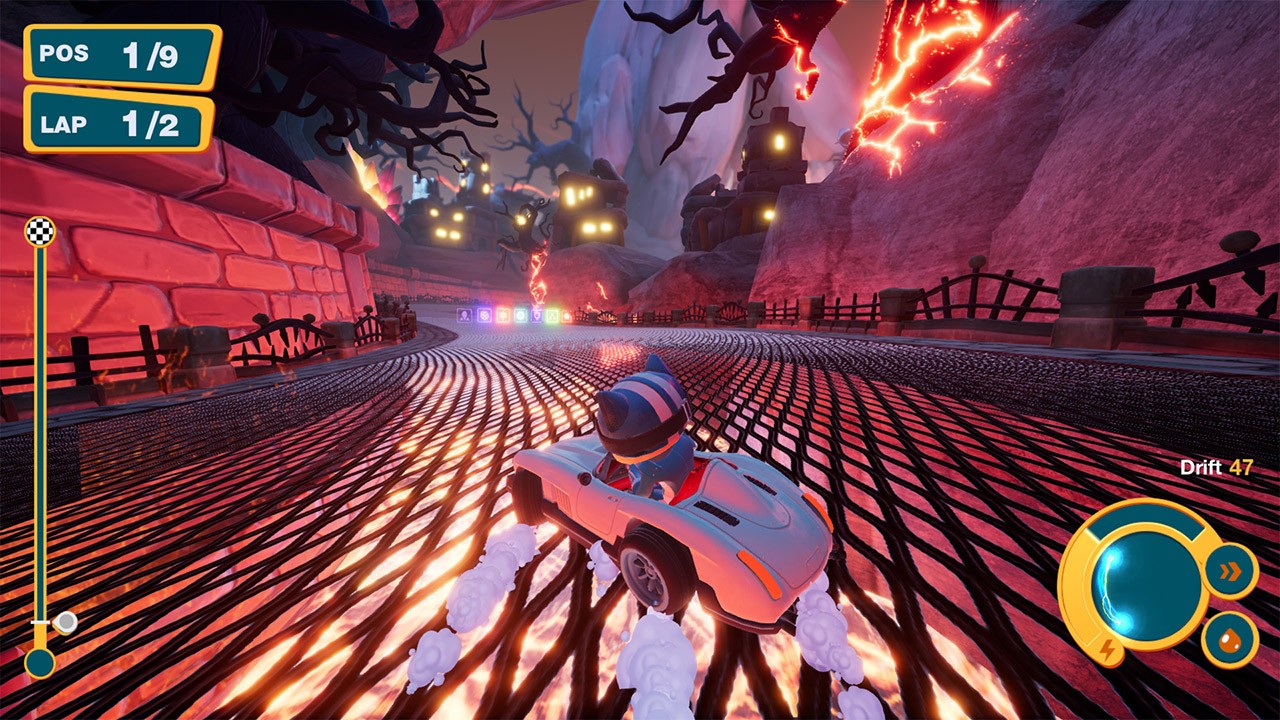 While there’s a good deal of unlockables, cars and characters don’t add much to the gameplay. Sure, they do have their perks like gaining energy from jumps and collisions or using less oil to use in an oil trap, but you could stick with the same character throughout. It’s more of a cosmetic thing, and no doubt you’ll have your favourite. Even better – you can choose a colour for your car too. Spoilt isn’t the word.

Power-ups are a little better. As you unlock new cars and cats, power-ups can turn the tide of a race with some sneaky methods. One of my favourites is the missile launcher that homes in on a racer and unleashes a shark that slows down the driver, causing damage to their vehicle. There’s only so much damage it can take until it’s destroyed. This doesn’t spell game over, but when played modes such as Strike, the objective of the game is to destroy other players. If someone gets you, a point gets removed from your total score (the number of cars you’ve destroyed).

Of the modes available are Strike, Race and Drift. Strike is mostly covered above. Some of the levels will feature a continual supply of bots to destroy – each time you drop their damage to zero; you earn a point. However, there are some levels where there are only a handful of other drivers, so it’s best to hover back, grabbing each power-up scattered about on the course.

Race is the standard race where you need to run circles around the other player through a series of laps. You only need to do two or so per course, but they tend to be a bit longer than other titles in the genre. The Drift races are a lot of fun and Meow Motors take on drifting works well – like an even more arcadey version of the Need for Speed series, you simply tap the B button, and you’ll drift into action; keep it going, and you’ll build your multipliers up and subsequent score. However, it resets to zero if you hit the wall or an obstacle. A quick note on obstacles such as crates – they don’t slow you down or appear to do damage, so it’s not clear what their purpose is. There are, however, other hazards such as cannons crossing your path. Those will have an impact. 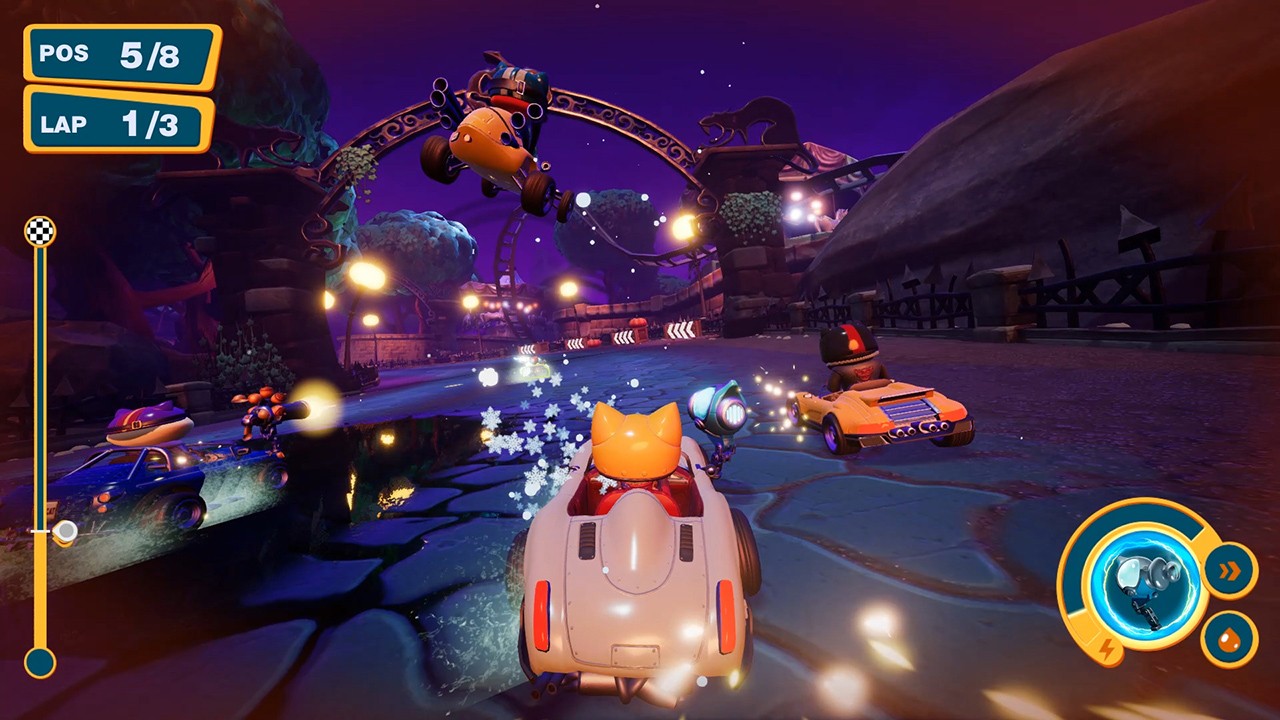 Meow Motors is very pleasing to the eye. The first levels look like the Arizona deserts and almost like you’re playing a Warner Bros. cartoon. Animation, character models and lighting are pretty decent too, but I did have to up the brightness on my TV as some areas are incredibly dark, and it was hard to see where to go. Some of the courses throw in a red herring with a sign pointing one way when the road bends the other direction. It adds to the urgency of the races as it’s a pretty fast-moving game.

That would bring me to another area of the game which I wasn’t too fond about – the challenge. While there are a variety of modes to switch to make the game harder or more difficult, I did note that it was quite hard to catch up with other racers once they overtake you. This is a good and bad thing. If you have the lead and neither crash or get hit by a power-up, you could steam through and win each race quite easily. But, make a slight mistake or get targeted by one of the other drivers and they’ll speed past you and in my experience, it was a nightmare to catch up. With games such as Mario Kart, there’s a slight handicap, so to speak, where there’s still hope, and you can catch up with the leader. With Meow Motors, however, it’s a little more punishing, but not wholly unreasonable. Just don’t crash.

There currently isn’t an online play mode, but you can have a quick race with another player locally. You can either play with or without bots, and based on the earlier comments about difficulty, it was more fun playing against the other person than both of us playing catch up. New characters and vehicles are unlocked in the main game, but you do have a handful to choose from if you decide to go for the two-player version first. Alas, the versus mode is just that – you can’t compete for any of the trophies or do a story mode together – it’s literally in the title of it being a quick race. On the upside, you can choose where to race, how many laps and bots to include.

Meow Motors is not without its flaws as covered above. It looks better docked, but in both modes, the cars sometimes drift a little (not in the literal sense), and there’s just a fraction of lag in getting back control of your vehicle. It’s very subtle and doesn’t happen all of the time, but you can sometimes have a good run, and then the car slides out a little. The only way to rectify it is by going into a manual drift (the B button). With all that said, I had a blast with Meow Motors, completing in two sittings, but if you’re pushed for time and in a hurry, you could finish it in the day. While it’s mildly addictive and seductive in offering you new goodies the further you progress, this is still a title that you’re likely to come back to. At the very least for a two-player race.

For fans of the Mario Kart series who like a good arcade racer with various power-ups, unlockable vehicles and characters. Meow Motors is a family-friendly title, though it may prove a little frustrating for younger players when being overtaken and finding it hard to catch up again. Well presented and undoubtedly worth playing.