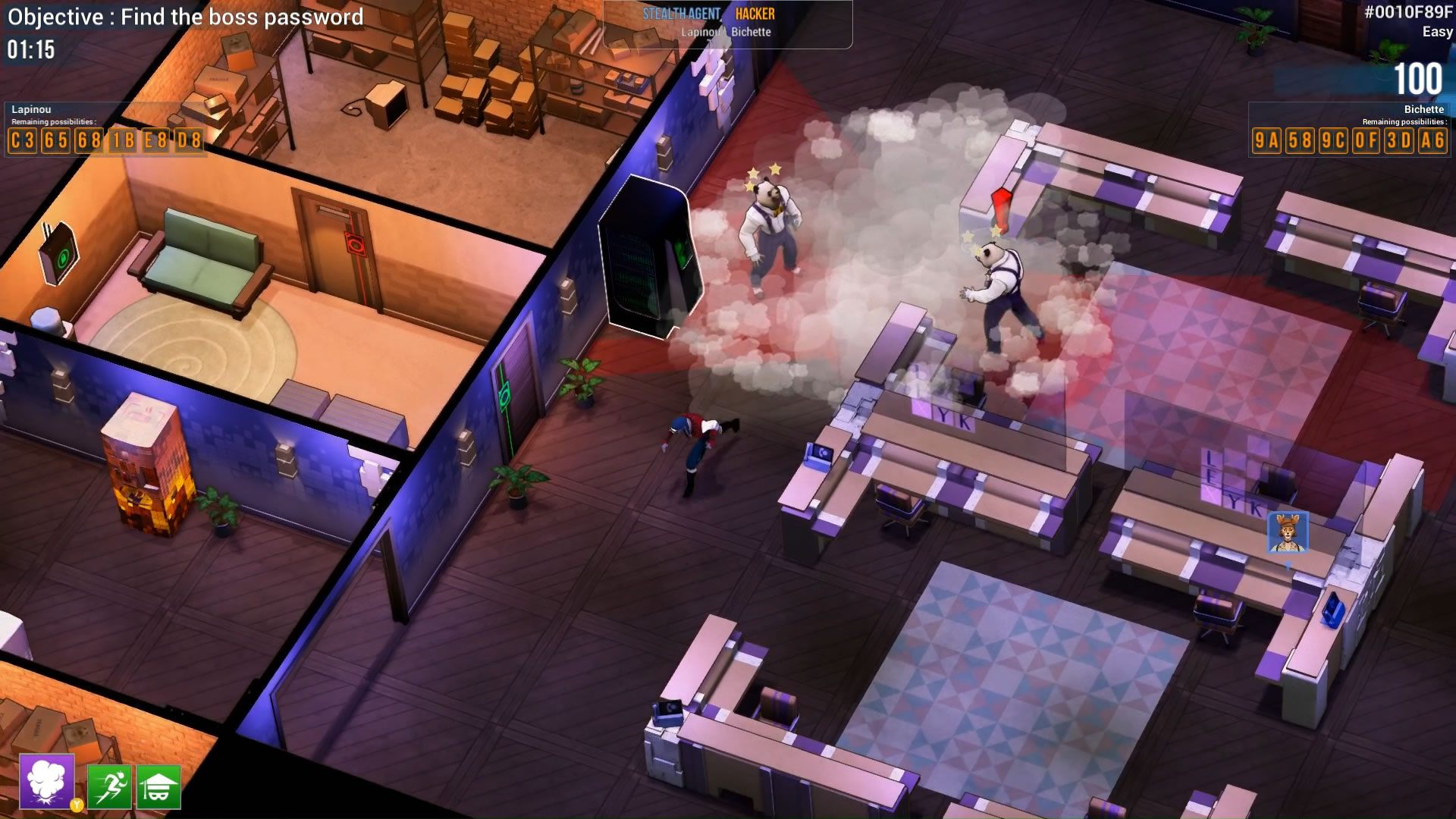 A genre that we’re constantly reminiscing about is local, co-op games. In the early 2000s, it felt like every game was meant to be played with a friend on the couch, but nowadays, online multiplayer is the norm. Even traditional genres that were popular for local multiplayer such as racing has ignored its roots, opting to offer a compelling, single player experience, or you can just play online with friends. Hacktag feels like it was heavily inspired by titles that belonged on PlayStation 2, but is it good enough to maintain your attention? Or does the nostalgia wear off quick?

I like to start of by mentioning how developer, Piece of Cake studios, has captured a unique feel and presentation. It’s clear that when designing this game, Hacktag was meant to offer gameplay and an atmosphere that is hard to come by these days. The menu has an old-school feel to it, with various characters working in the background whilst you’re free to browse the menus. The noir/spy-like music that plays quietly in the background add to the already polished title that the studio is offering to you. Hacktag heavily encourages to play with a friend, which is obvious given it relies on two people working together to achieve their mission. The campaign starts with a tutorial mission with your uncle, and it covers the basics of hacking and being a field agent. After that, you’re free to choose a series of missions which vary heavily in difficulty. Before starting each mission, players can exchange in a dialogue with the person giving them the job, which can result in some humorous exchanges between one another. 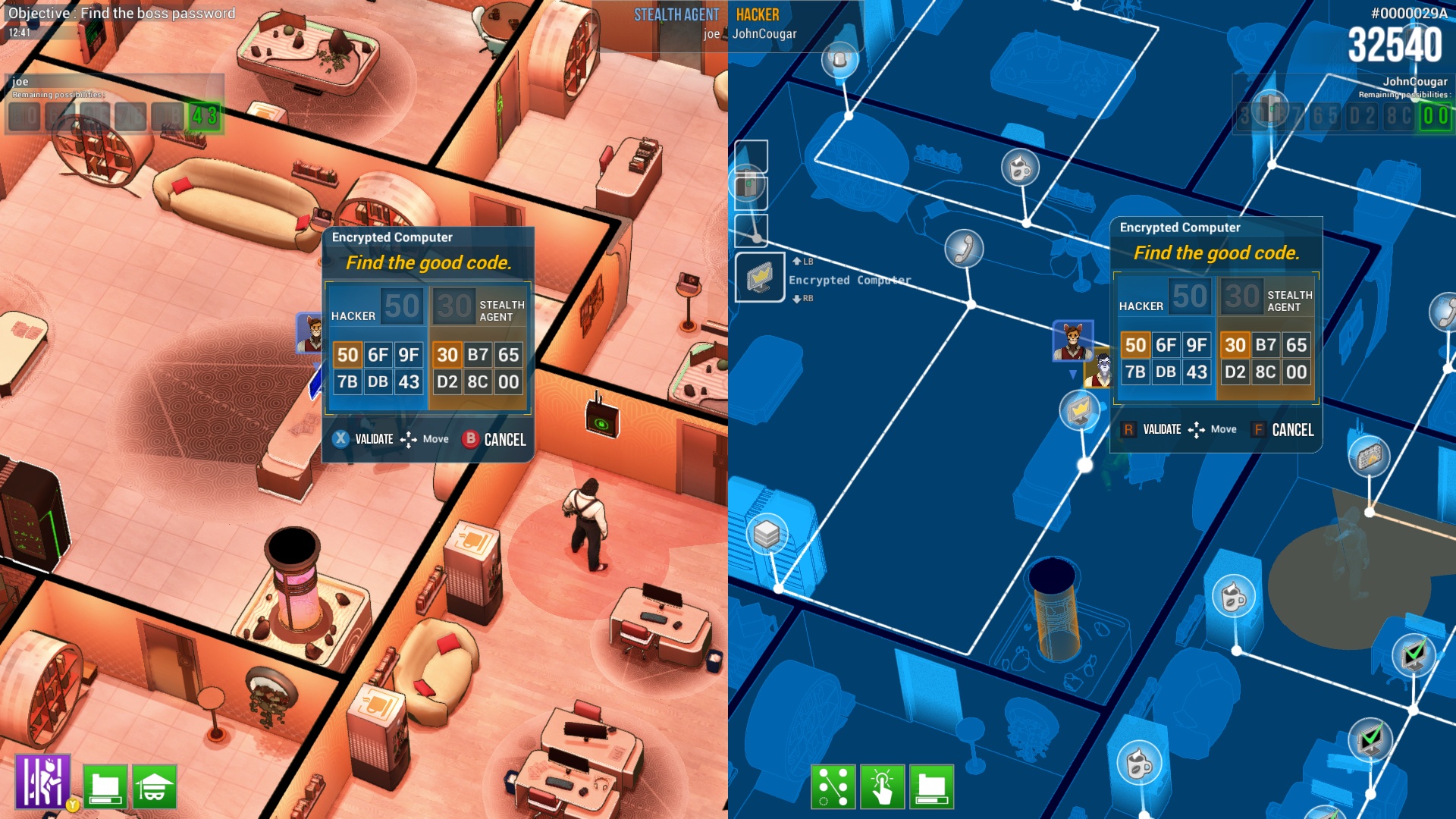 Even when writing this review, I’m still unsure what it is about the gameplay that makes me feel like it could be improved upon. The core mechanics focus on the hacker and field agent working with one another. When the screen is split, the field agent can roam freely within the building given he has access to various rooms, whilst the hackers screen is comprised of a network-type screen and can only travel through lines to other nodes. Hacking can be achieved through either player, with the goal of each mission to steal as much data as possible. The gameplay is smooth, and it appears that the developer constantly updates the game that address various bugs. The problem I have with the gameplay is that it doesn’t feel too balanced. Either player can do 90% of the work and there isn’t any mini game that requires both players to work together. In all honesty, it feels like the field agent is only there to open firewalls for the hacker to do their thing. Both players can aid one another. The field agent can disable anti-virus’s that hunt the hacker, whilst the hacker can distract guards with phones ringing. I feel like the gameplay is solid but too safe for its own good.

Furthermore, I don’t think Hacktag is challenging enough for gamers who will quickly learn how to approach each mission. When completing a level, players can unlock perks for their characters, and can store up to three perks each per mission. It’s a cool reward system to have by adding perks, but I don’t think the game needs them whilst the levels are how they are. If the missions are made considerably harder, then sure it’d work, but at the moment, it feels like the players can become really overpowered in the game, which takes away from the unpredictable nature that the developer is trying to implement. Guards and anti-virus’s usually force players to study their patterns, but again this is easy to exploit after watching them go around the same desk at the same pace several times. It may have been acceptable fifteen years ago, but Piece of Cake studios could improve the gameplay by making enemies feel more life-like and dynamic. 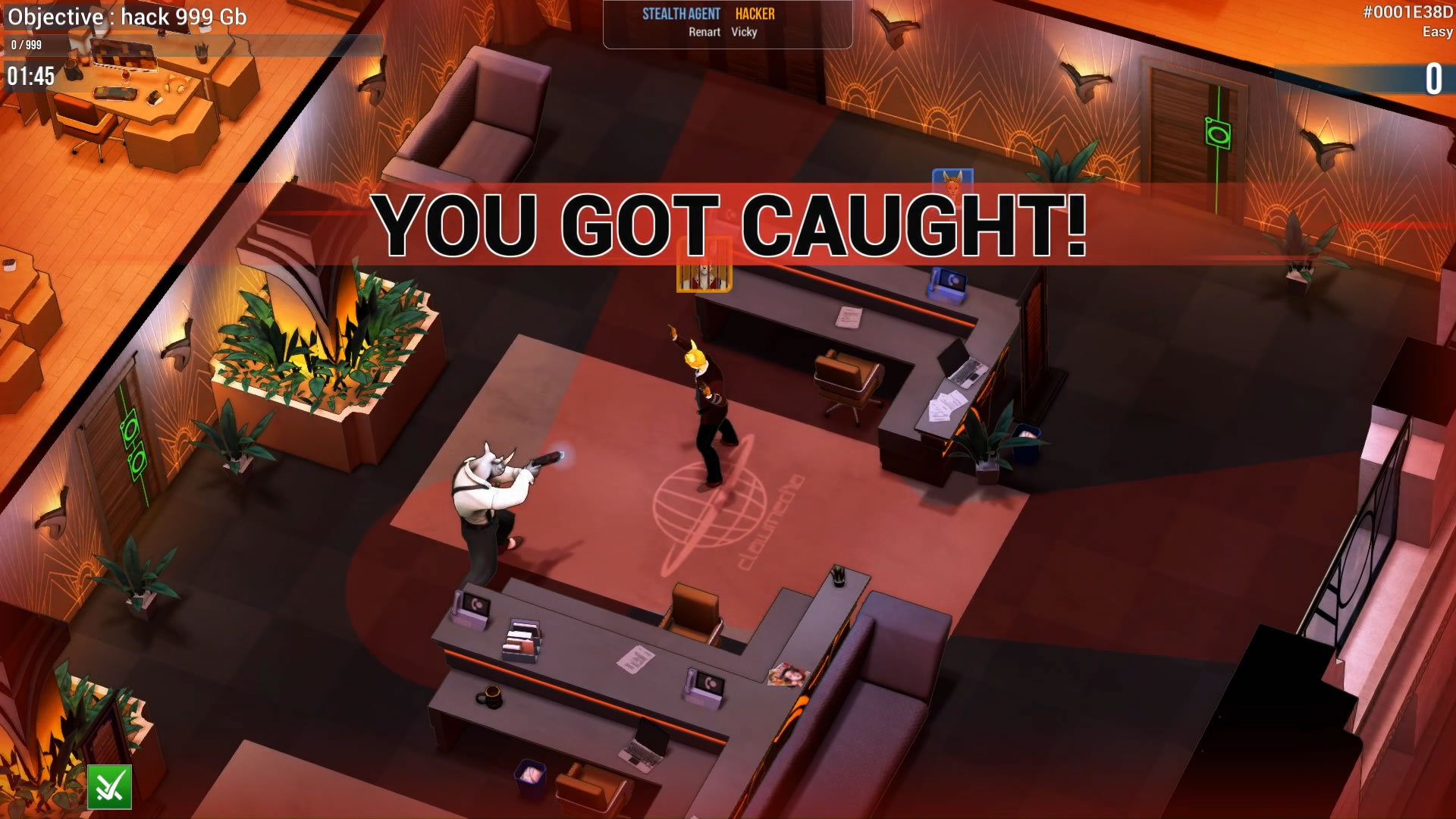 The game looks brilliant. I really enjoy the graphics and theme that the studio has opted for. Humans aren’t an option. Instead, players can choose various human-like animals to represent them, such as a cat, racoon, or a deer. Hacktag offers a wealth of various customisable items too, from accessories, to jacket designs and colours. There are six slots for the player to save various character models which is also appreciated. The graphics when playing are well put together. Character models of Rhino’s dressed as 60s mobsters are cool to look at, and each room is pleasing on the eye. As I’ve mentioned before, Hacktag captures the essence of a noir, stealth game.

Hacktag offers a unique and engaging take on co-op play but the title has a lot of potential to become even better. For its current price of £15.49, it could put off gamers who are looking for a relaxing, causal title at a bargain, but if you have a friend desperately looking for a co-op game to play, I think Hacktag could satisfy your needs. Its well-presented, supported heavily by its developers and offers a wealth of missions and customisation options for you to create your own unique character. I had a lot of fun playing Hacktag, but until the missions get harder and players are forced to work even closer together, it may be hard to keep a player hooked after a few sessions.