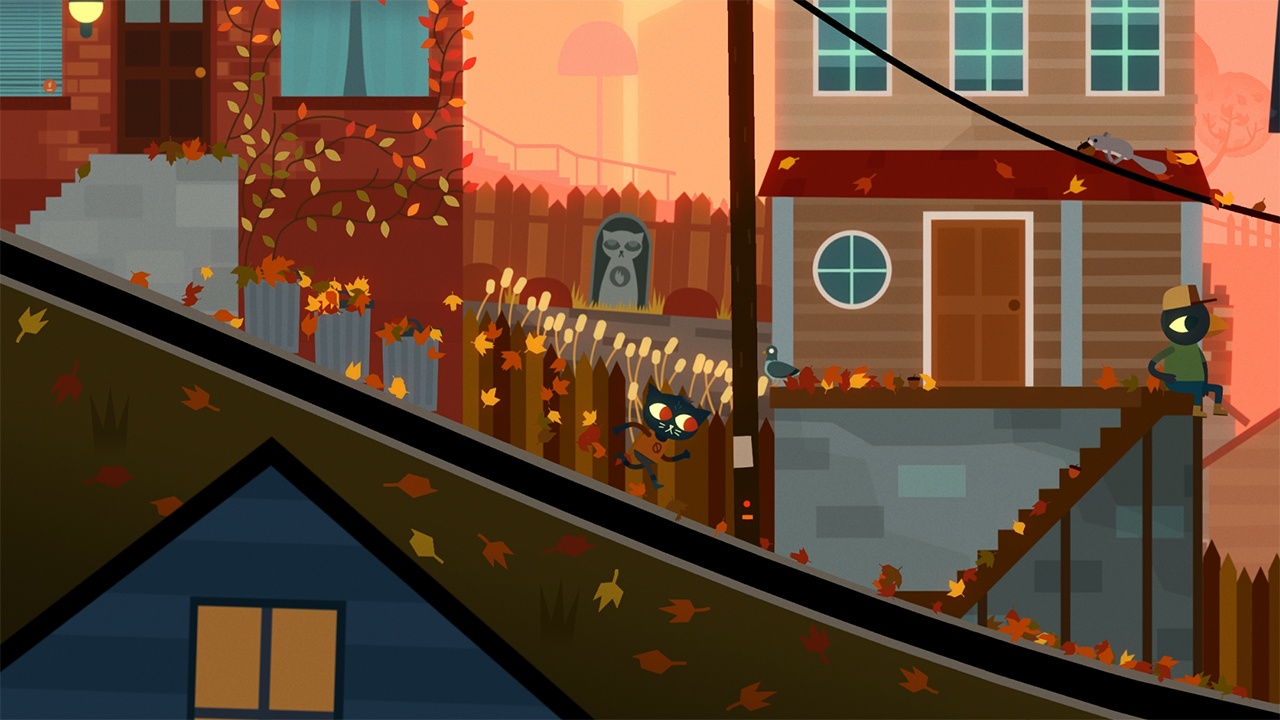 There was a period of time where the entirety of a PSA or basically any sort of lesson that you could learn from a video game boiled down to a splash screen that popped up before the actual game began. There was nothing like having the confusion of the Teenage Mutant Ninja Turtles trying to fight the Foot Clan in the sewers while also having the FBI remind you not to do drugs. It didn’t make a ton of sense and, as we can see with the current generation of 30 somethings, wasn’t entirely effective. Nowadays, there are tons of informational and honestly educational titles out there that are significantly more subtle, resulting in titles that teach us a lot about depression (Actual Sunlight), new age addictions (My Name is Addiction) and the high price of heartbreak (Doki Doki Literature Club). But it’s important to mix gameplay with the lessons, and there is certainly a market for the right tale to tell if there are people around to listen. Which brings us here to the newest indie release on the Switch, A Night in the Woods.

A Night in the Woods is the anthropomorphic tale of Mae, a cat who has just dropped out of her sophomore year at college and is returning home to new small town of Possum Springs. Mae has clearly had some kind of schism with the supposed enjoyment and enlightenment of higher education, and just wants to return to her roots, see her old friends and maybe enjoy a few days of not having to think about or do anything regarding her future. But it quickly, very quickly, becomes evident that time has not stood still while Mae was away, and things have changed, not the least of which her friend Casey has gone missing. Amidst trying to rekindle her friendships, find direction in life and dealing with her own mental health, Mae and her friends must now discover the cause behind some truly dark secrets that Possum Springs is harboring. It’s a great presentation of a tale, and it rings true with what some folk may have experienced after the winter break: you really can’t ever go home again.

RIght out the gate, A Night in the Woods does a fantastic job of capturing the players attention with a unique art style and way to interact with the environment around you. Mae moves in what can be called a side-scrolling exploration, but there’s so much dynamic to her movements that it feels more natural and engaging that simply “walking.” Mae can bound around and move on virtually any surface that you would expect someone to step upon, from the stairs and sidewalks to balancing on mailboxes and bouncing off telephone wires. Mae doesn’t exactly move like a cat, but more like a lighter-than-expected kid might do, maintaining her center and wobbling a bit with some steps. There’s really only one button to think about, and Mae can interact with most of the folk she encounters within Possum Springs, who all remember her in one form or another. To help move along the plot, entrance to certain places is allowed and disallowed, but this far from keeps the game linear and targeted: indeed, one of the dual enjoyments and frustrations of A Night in the Woods is the ability to meander and waste time. 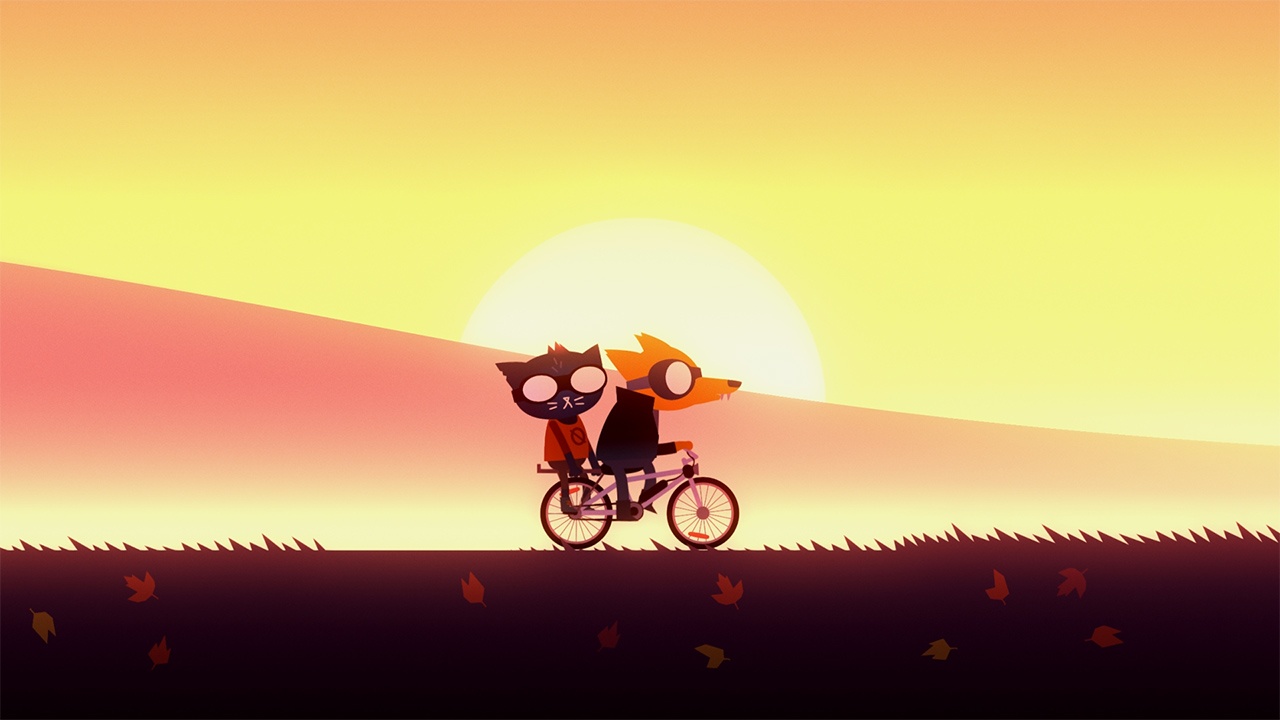 You see, you might be familiar with a “slow burn,” or making the plot and chief idea of a story reveal itself with an unhurried pace, letting players or viewers get a creeping sense of what is going on or about to happen. A Night in the Woods, forgive me, is one of the slowest burns you can possibly imagine without the pilot light going out entirely. It will take at least a couple of hours, if not longer, for the player to even get an inkling of what the main plotline is, and quite a bit longer after that before any dramatic reveals show you what is happening to the people of Possum Springs when the reality of the new world and small town America collide. The idea is to make the player as complacent and comfortable as Mae herself is before suddenly yanking the rug out from under you, and, for the most part, it’s incredibly effective. There’s so much to do within the game, even from the very beginning, that only affects your enjoyment, not the actual storyline. I loved, loved playing bass in my room and wasting a ton of time in Demontower (a roguelite minigame that Mae has on her computer). You get happy with being just a part of the world, and you are hesitant to shake things up because you know, deep down, that something is just on the horizon.

But shaking things up is what makes the game important. There’s an ironic moment when Mae observes the new poster that Possum Springs has put up in their bus terminal to celebrate the wonders of the town and Mae dismisses it, because “that’s not how it really is.” And you do see this beautiful little hamlet of suburbia throughout different seasons, and how beautiful it looks from the outside. Then you start talking to people, to the different animals who make up the land, and you realize that there’s a lot that’s broken and less than good. People are out of work and really upset about it. There are big businesses ruining things for small town shops and deals. Your neighbors are dealing with needing to move for a future, having their own addictions to substances, and encountering ever-growing evidence that maybe things aren’t just going to turn out alright. I mean, there’s even a mine, and, if anything tells you the dark future of a town, it’s a dependency on a mine. Mae came back from college to try and avoid things and place herself in a time capsule of comfort, but it’s not high school anymore: we’ve all got to move on.

Thankfully, there’s a ton of great dialogue to make the constant stage of non-action not only bearable, but really enjoyable. Each person you meet is believable, from the unlikely couple of a hyperactive fox and his logical, patient boyfriend to the immigrant astronomy teacher who has hope for the future. You don’t just like talking to people, you actually want to find out more about their lives and get to know them. Even Mae’s parents have very different and interesting dynamics when talking to their daughter, and it’s great to have this grounding strip of two people who unconditionally love their daughter and support her, even when things get tough. 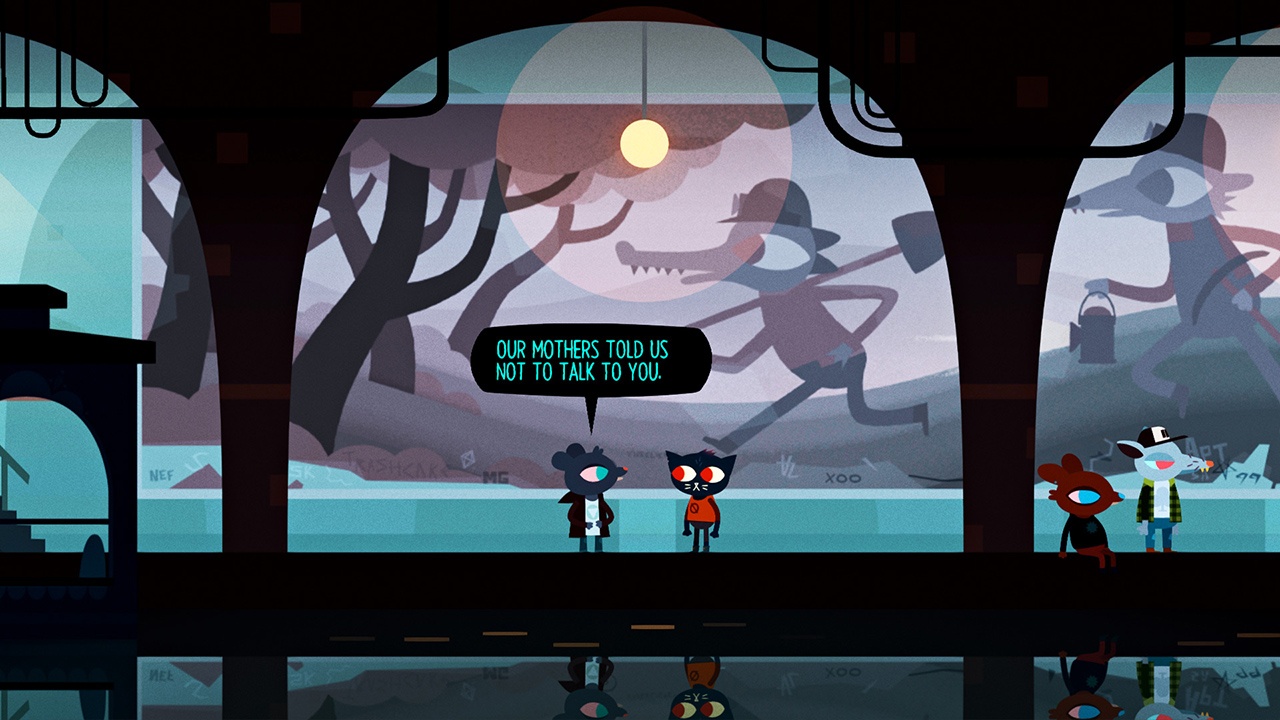 Plus, if you like the way A Night in the Woods handles its action and interactions, then the Nintendo Switch is the right place to start, and an even better place for veteran players to come back. Besides the main game, you also have the mini stories of Lost Constellation and Longest Night, which add a bit to the overall world and mythology of A Night in the Woods. Longest Night is sweet, albeit short, and will tell you more about the characters you deal with on a regular basis in the main game. Lost Constellation is actually really engaging and fits in well with the start of the game, as your grandfather’s last words are how the game begins, and Lost Constellation is all a bedtime story from the old man himself. These two mini stories have always been available, so that may not be exciting for veterans. However, this is also the Weird Autumn edition of the game, which adds some much needed foliage to the game, and, oh right, about four additional hours of content. I’ve unfortunately never played the original, so I can’t attest to the exact extra parts, but Gregg and some criminal activity are apparently new and really made me appreciate the depth of his friendship with Mae. This is like having a friend show you this new extended edition of Lord of the Rings where they actually managed to put Tom Bombadil back in, and you might be confused but you’re loving it all the same.

Saving the best for last, the soundtrack of A Night in the Woods may be one of my favorites in quite a while, but not as a video game soundtrack. There’s a lot of tonality that comes through this game, but it feels more like a mix of a coming-of-age movie and a thriller story, and the music captures that in such an amazing way that I actually want to listen to it outside of the game. I’ve already caught myself singing the lyrics of Die Anywhere Else when I’m not playing the game, and it just keeps getting better and better. As band practice and Mae’s bass is a big part of the whole momentum, it’s beyond satisfying that the music is good and not just covers of random existing stuff or electronic noise. I’ll always love Crypt of the NecroDancer, but I found the music to work best when I’m playing the game: outside of that, it doesn’t fit into my everyday life. A Night in the Woods feels like what you put on the stereo before you head out on a roadtrip to finally get the hell out of here. It’s the music that you need when you’re finally writing that last letter to your boyfriend to tell him goodbye. It’s the tune that marks the moment when you finally realize this doesn’t have to be your future, and you can make it somewhere else.

A Night in the Woods isn’t going to be for everyone, because it’s a new direction of storytelling for a lot of gamers. Oxenfree, which has some similar elements and ideas, moves forward at a breakneck pace in comparison to A Night in the Woods. But there is so much here for players to identify with, to pick up on, and to keep in mind as they move forward. You can come back and retrace your steps time and again, find new ways to converse and new interactions, and I feel like you’ll need a wiki or at least your own insane notebook to make sure you don’t miss anything. If you want to have a new tale to tell, to have a really good, novel-length game to ride and control but ultimately live, then grab a flashlight and some batteries: let’s spend a Night in the Woods.