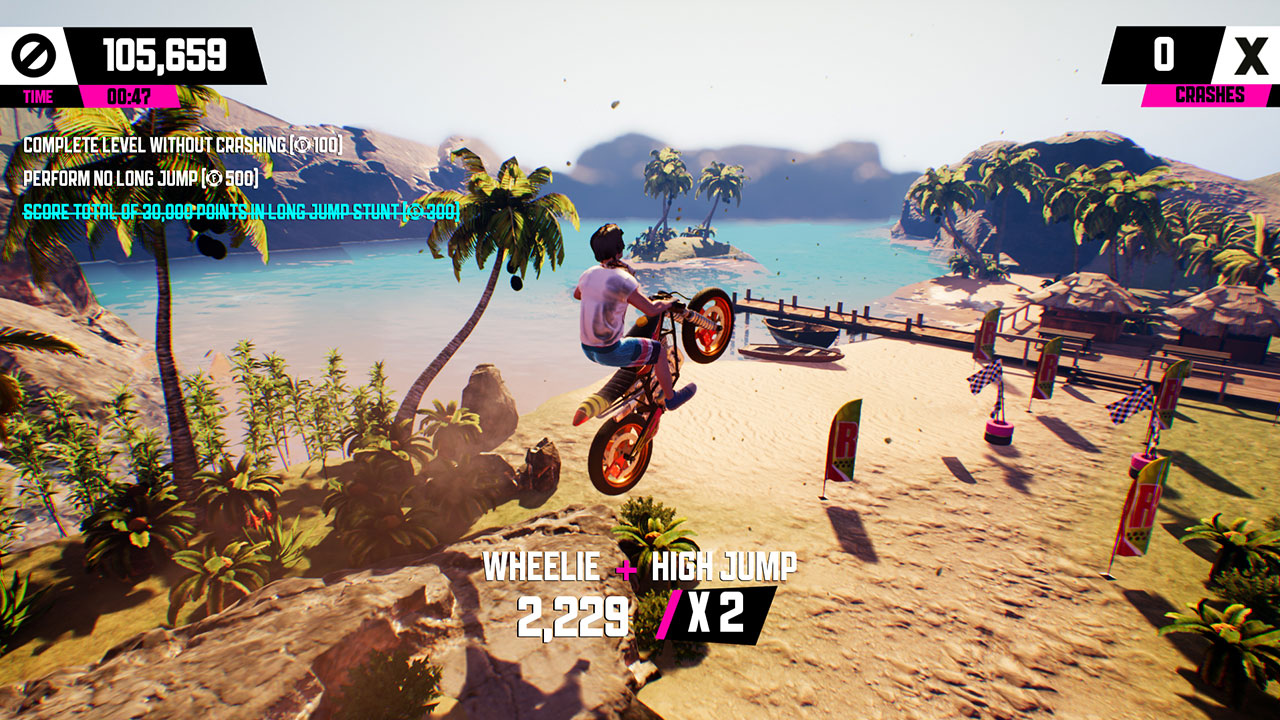 The concept of performing stunts and maintaining a balance whilst riding a motorcycle can be traced back to the good old days of arcade and NES gaming. Excitebike was one the earliest forms within its genre and also one of the most popular; placing ninth in the all-time top-selling titles upon Nintendo’s machine. These days, the genre is largely ruled by the Urban Trial franchise and their Freestyle range of titles. The third game within their series now comes in the form of Urban Trial Playground, an arcade-style motorcycle stunt game that is now burning rubber towards an exclusive release upon the Nintendo Switch.

Developed by Teyon and published through Tate Multimedia, this 2.5/3D stunt/dirt bike simulator follows within the same lines that can be traced back to the retro days of racing; although it’s presentational and mechanical values have been given a significant feeling of modernity. In its basic terms, you’re tasked with riding a motorcycle from the left-hand side of the stage to a finishing point somewhere on the right. However, between each of these points, you need to navigate yourself over a series of wild and wacky ramps and jumps, whilst maintaining a balance on your bike to ensure that you don’t cart-wheel over the handlebars, or slide back to bruise your behind on the dirt track or asphalt roads. It sounds simplistic in its nature, but there’s a lot more to its mechanics, as well as a level of depth that ensures that this is no easy rider and that you’ll be in it for the long haul.

The more you play this game, the more you get a feel in the appreciation of the nuanced tuning of fine proportions. The usual shifting of your body weight still determines a level of balancing on your bike, especially when airborne or making adjustments to land safely on the ground. However, the inclusion of independent braking controls now gives you more control over your bike than ever before. It brings a whole new level of physics to the proceedings, allowing you to utilise both front and rear braking in order to fine-tune your braking ability and perform stoppies, a front facing style of wheelie. These soon become an important element when trying to land from gaining air or performing an emergency brake to avoid any unnecessary crashes or collisions. 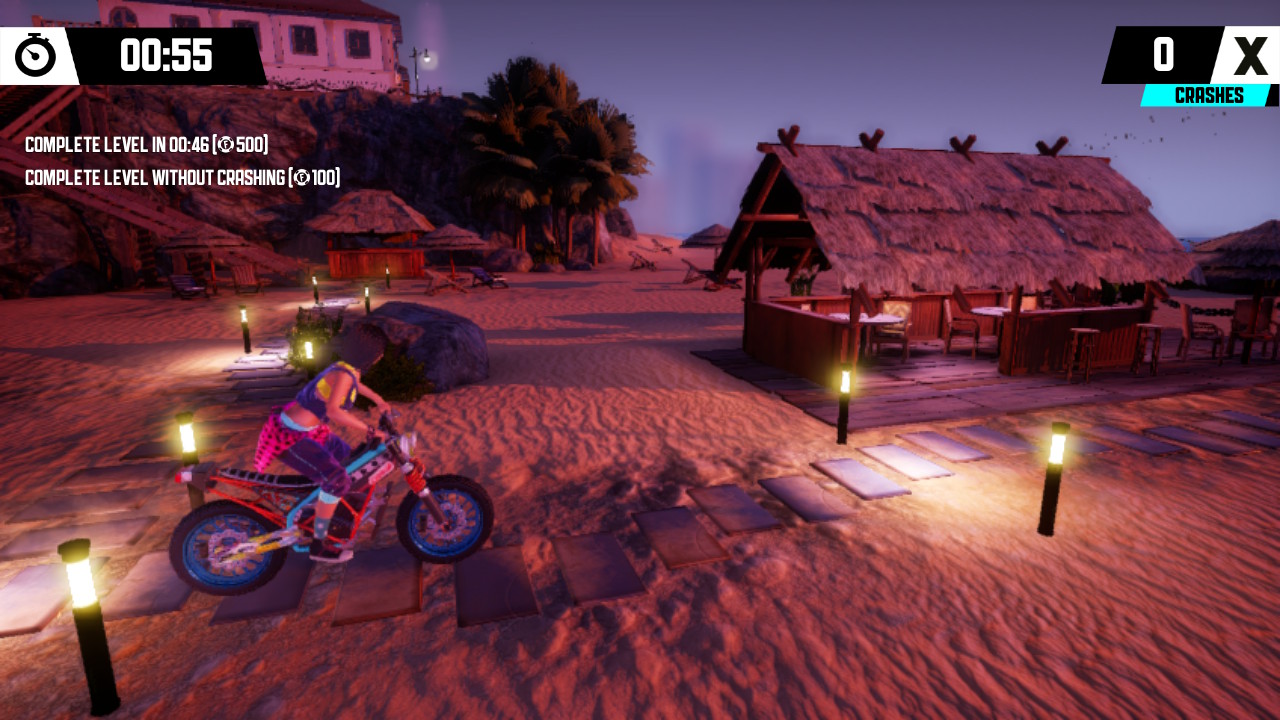 As well as maintaining control, another important element in performing a successful run of each course is through your ability to perform a variety of breath-taking stunts. This can achieved through catching enough air from propelling yourself from a series of self-prepared, as well as make-shift ramps that line each of the levels. Although building up a momentum of speed through wheelied boosts can help, you can also perform a smart-jump which, if timed correctly, can gain you precious air time and enough scope to pull off a combination of stunts to create a multiplied score to success. However, it’s a difficult move to pull off if not timed correctly, creating a make-or-break mechanic that simply fails or is absolutely breath-taking. Saying that though, thankfully it isn’t a necessity either in order to get through each level, although some do contain some obstacles that need to be jumped over, but if you want to attain the highest scores and accrue all the collectibles, then it is!

Despite a complexity in the level of these mechanics, the actual control scheme is sublimely smooth in its execution; making what may be difficult in implementation, actually easier to pull off than how it sounds. Each of the braking components are bound to the ZL and ZR shoulder buttons with rear and front being respective, whilst acceleration is performed with the A buttton. Balancing, ducking and wheelies are controlled with the left thumb-stick. It’s a basic set-up, yet one that works surprisingly well with a satisfying level of accuracy achieved with each braking or movement. It all adds to produce a game that runs with a fluidity that gives a good sense of speed and manoeuvrability. Once you feel accustomed to the controls and physics of your bike, you can easily burn rubber through a series of stages in a smoothness of execution.

To enhance further playability, as well as give the game a value of re-playability, each of the levels contains a series of collectibles, star rewards based on performance and a series of objectives that need to fulfilled on each run such as reaching a certain number of flips, landing a set distance off of a jump or just simply pulling off a seamless level. These all work towards earning credits which are used to personalise and upgrade existing character models and bikes, as well as unlocking new, more powerful or agile machines. Again, by accruing these new bikes, it adds to revisiting previous levels in order to achieve a better rating, higher score or collecting icons that may have been previously unreachable. A nice feature here though, is the ability to transfer components from other bikes onto newer ones that are bought through the in-game store. 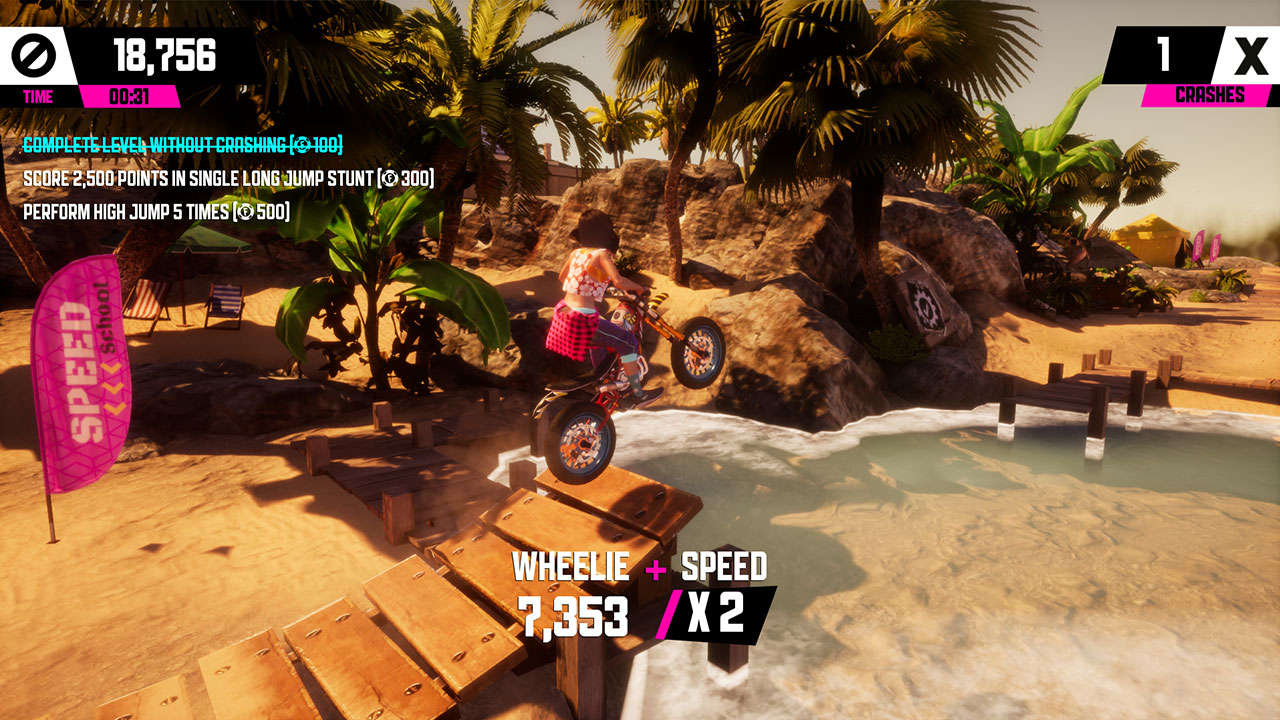 Each of the levels are highly detailed, offering a crisp and colour induced environment; although a distinct lack of population does promote a feeling of emptiness that lacks a certain personality. However, this largely depends on how you play the game upon the Switch. In docked mode, everything runs seamlessly, although in handheld, I couldn’t help but feel that the frame-rate dropped slightly; it’s still a smooth experience, but felt ever-so-slightly less refined. Saying that though, with its easy-to-digest series of levels, it sits nicely within the casual style of play that the Switch accommodates so well. Its audio qualities too, contain a good eclectic mix of urban soundtracks and non-intrusive engine sounds.

To add further to the base game, there is also DLC available that adds extra content; both in terms of gameplay and cosmetic personalisation. The Even MORE Style Pack offers a series of new motorcycle parts and clothing for your riders, whilst the Challenges Pack brings new levels, new challenges and new rewards. Whilst the purchase of both of these packs will set you back no more than a fiver, it’s also worth noting that Urban Trial Playground Deluxe Edition is also now available to buy from the Nintendo eShop, a package that includes the base game and all of its DLC at a very reasonable cost, considering the amount of gamplay and content that is on offer here.

Overall, Urban Trial Playground offers a good experience for fans of its genre. In fact, thinking about it, everything here is silky smooth; from its presentation to the fluidity of its movements, this is a game that purrs along in full throttle. There’s no online multiplayer element, although for the first time in its series, it does contain a local split-screen couched experience that still maintains a steady frame-rate and smooth experience; especially in trying to maintain the chase against your fellow competitor, adding further to the thrills of speed and the sublimity of its tight precision. There’s a nice variety in level design, although the basic premise of getting from A to B remains the same. However, there’s also a sound level of depth and bundles of replaybility to keep your hand firmly on the throttle. For its price, you’re essentially getting the best-looking Urban game to date, as well as a satisfying level of content that will easily entertain for some time to come.

A motorcycle stunt racer that keeps your hand firmly on the throttle.