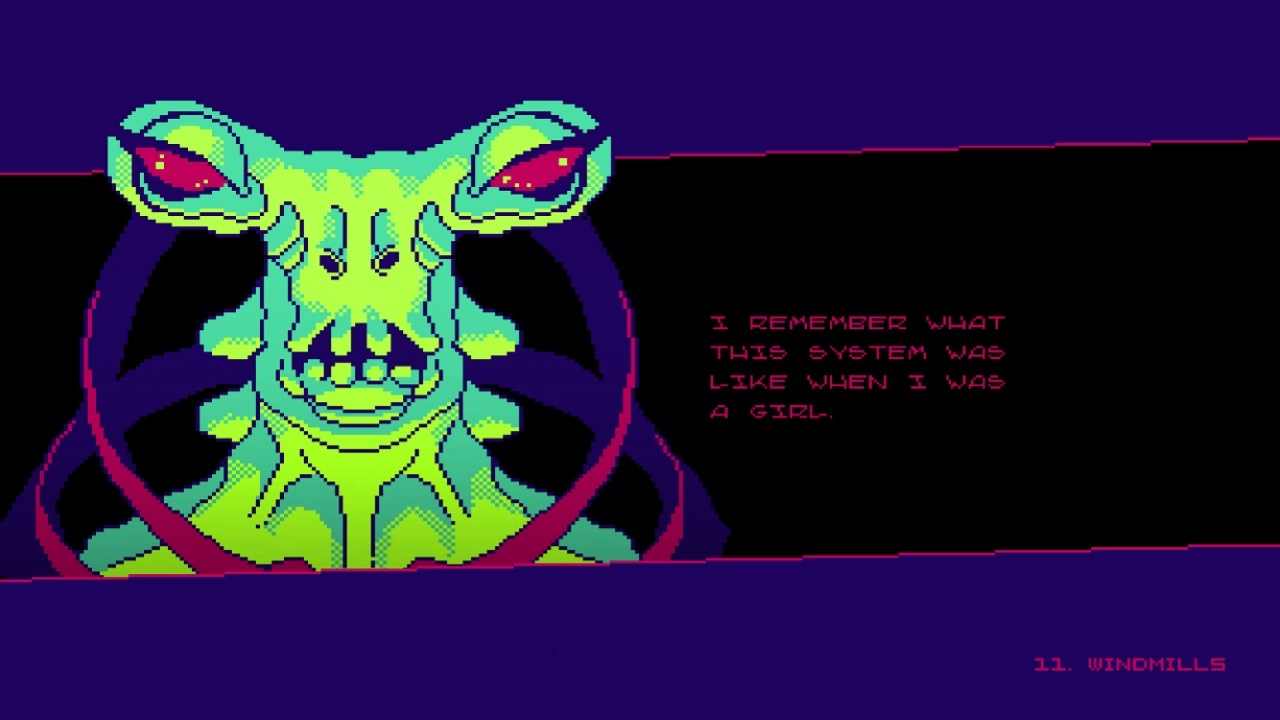 Bringing a mobile game to the console marketplace seems to be a dangerous position we see people taking time and again as developers look towards the golden goose that Nintendo has given birth to. On the one hand, it does make sense: at the very core of its appeal, the Nintendo Switch is a mobile system, one of the most powerful and interesting ones that could be fathomed by the minds in Kyoto. On the other, it’s distinctly not a smartphone or tablet, but a full-fledged gaming system, and there are certain expectations that come up when you game on a gaming console vs. on your everyday device. Some titles have worked out exceptionally well, with the specific port of Oceanhorn showing that a formerly mobile game can make a splash in the larger pool. Others, like Plantera, reek of simple, mindless activities that really appeal only to those looking to waste time and look at pretty pictures. So, the question becomes, where does ATOMIK fall on this line? Strangely, it manages to land smack dab in the middle.

ATOMIK: RunGunJumpGun, is a bizarre title that takes place in the far reaches of space, where a sun is beginning to go supernova and is swallowing planets in the process. This reaction, naturally, causes the remaining planets to panic and devolve into chaos and anarchy. You play a Scavenger, a nameless entity who is jumping from planet to planet for the sole purpose of gathering the remaining Atomik that’s left on each planet, with Atomik being an element that’s valuable enough to risk life and limb in order to obtain. Armed with just your giant gun and infinite ammo, the Scavenger goes from world to world, grabbing all the Atomiks he can carry and jetting off to the next planet. That’s…that’s pretty much it. High score and all that jazz, unlock different modes, beginning, middle and end. This isn’t a game you play for the story, it’s the action that drives us. 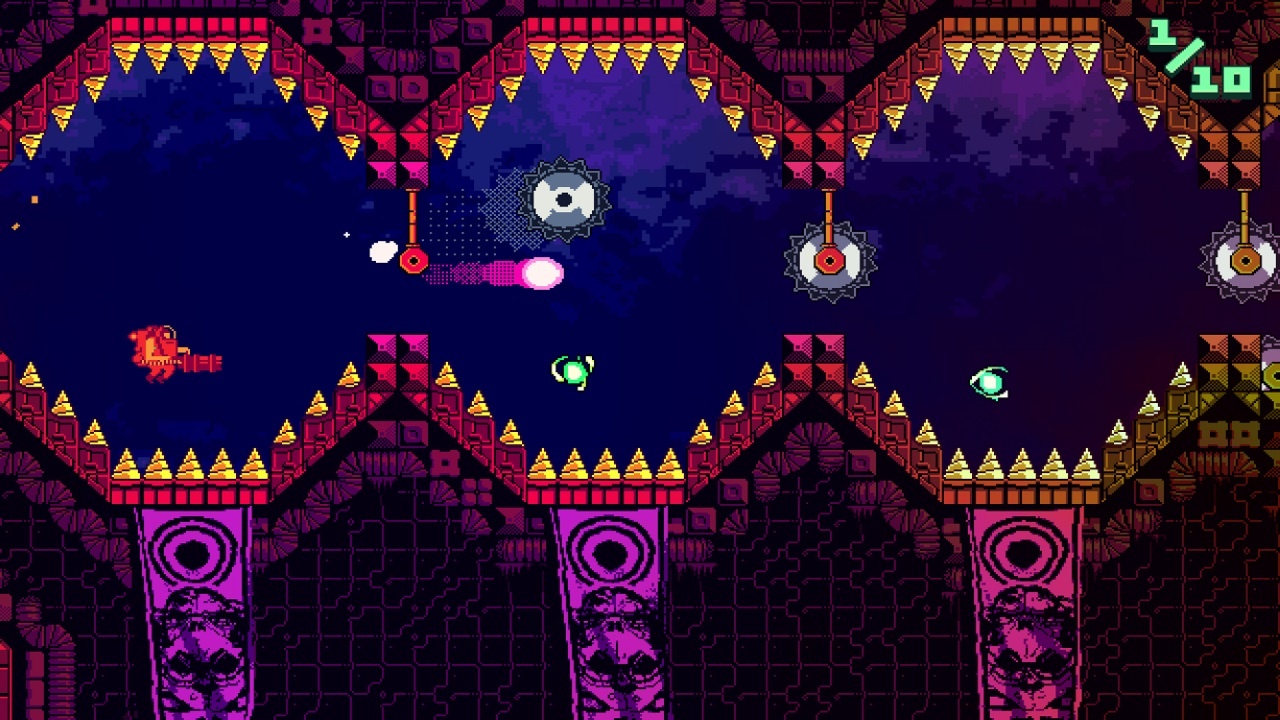 A very, very cursory glance would have you believe that ATOMIK plays similarly to another mobile title, Jetpack Joyride, and you wouldn’t be totally wrong to make that leap. After all, both rely on a player endlessly running, with the ability to jump and stay aloft by means of a gun that shoots endless bullets with enough propulsion to fly. On the other hand, there are a handful of fundamentals that keep it different. Firstly, this isn’t an endless runner: each world is divided into several stages, with a fixed number of Atomiks to grab in each and zero randomly generated items to worry about. Secondly, the gun needs to switch from flight mode to shooting straight ahead, because obstacles will, in fact, block your way. Thirdly, death is far from the ending of every playthrough. When the Scavenger ultimately falls prey to the horde of insane number of obstacles and traps, you merely zip back to the beginning of the stage and start over again. You can take up to one hit without dying, but you get a special marker for being able to finish without taking a single hit.

Being able to get into the groove of ATOMIK is the key to any sort of longevity in terms of both playing for a long time and being interesting in longform play. You very quickly realize that this game is the victim of quirks, and I don’t mean that in a whimsical and flighty fashion. Everything about this game comes down to split-second timing if you want to achieve the best scores and maximize your Atomik pickup. For one, you drop like a rock the second you stop holding down the jump button, so you need to time yourself perfectly if you need to shoot a target in midair. For another, the scrolling of the screen means that you’ll often end up behind walls that can’t be shot, must be surmounted, and are generally a pain in the ass. The music starts to get faded and distorted when you’re too close to death, and the effect becomes stressful and genuinely upsetting when you are doing your best to stay ahead of the curve. The difficulty ramps up immediately, and you learn the first planet, despite the madness you encountered, is actually the easiest by far: you quickly run into waves upon waves of bullets, buzzsaws that fly about when shot and rows upon rows of spikes that adorn the ceiling and the floor. 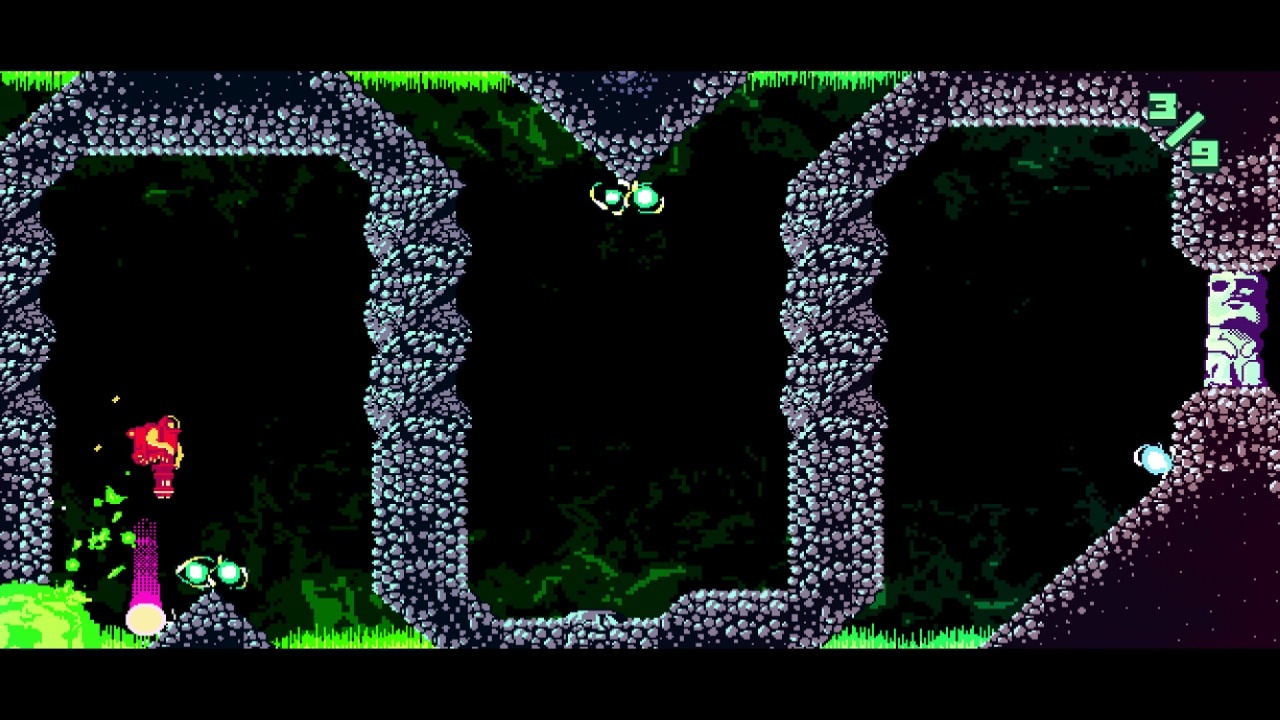 Aesthetically, I can see what ATOMIK is going for in terms of kind of a gross, dilapidated cyberpunk idea. It reminds me of a mashup of the world of Judge Dredd and Dead Leaves, creating something that’s bordering on abstract horror but hypercharged with neon colors. Everything comes across in this incredible direction of subjective art, and I did enjoy the strange jabs and barbs that I received from the surviving representative of each planet as I hurried along. But they were brief and, ultimately, pointless except to relay the corrosive atmosphere of planets that were staring down the barrel of annihilation. If this is your kind of thing, it works out well. If you prefer something more upbeat, you couldn’t be further off target.

ATOMIK wears the clothes of a game that’s been trying to find the right place to fit in, and I don’t think that it’s necessarily a bad thing. Even the title was reversed (it was originally called RunGunJumpGun on Steam), so it shows there’s growth happening even as we speak. The Scavenger mode, which is the primary vessel, does eventually open up to different worlds and different designs, but a lot of what you see is what you get.  So, ultimately, it comes down to how you align and identify with the title. Sure, it’s gruesome and simple, but it’s genuinely hard (good skill wins out) and unfairly hard (targets suddenly turn into foes). So, for the player who wants a mobile game that works better as a console game (but is still, most definitely, a mobile game), ATOMIK delivers in spades with loads of stages and brass ring attempts. But, for anyone looking for an experience beyond face value, you might as well jet off elsewhere: sun’s a-comin’ and we’ll all be dead soon.