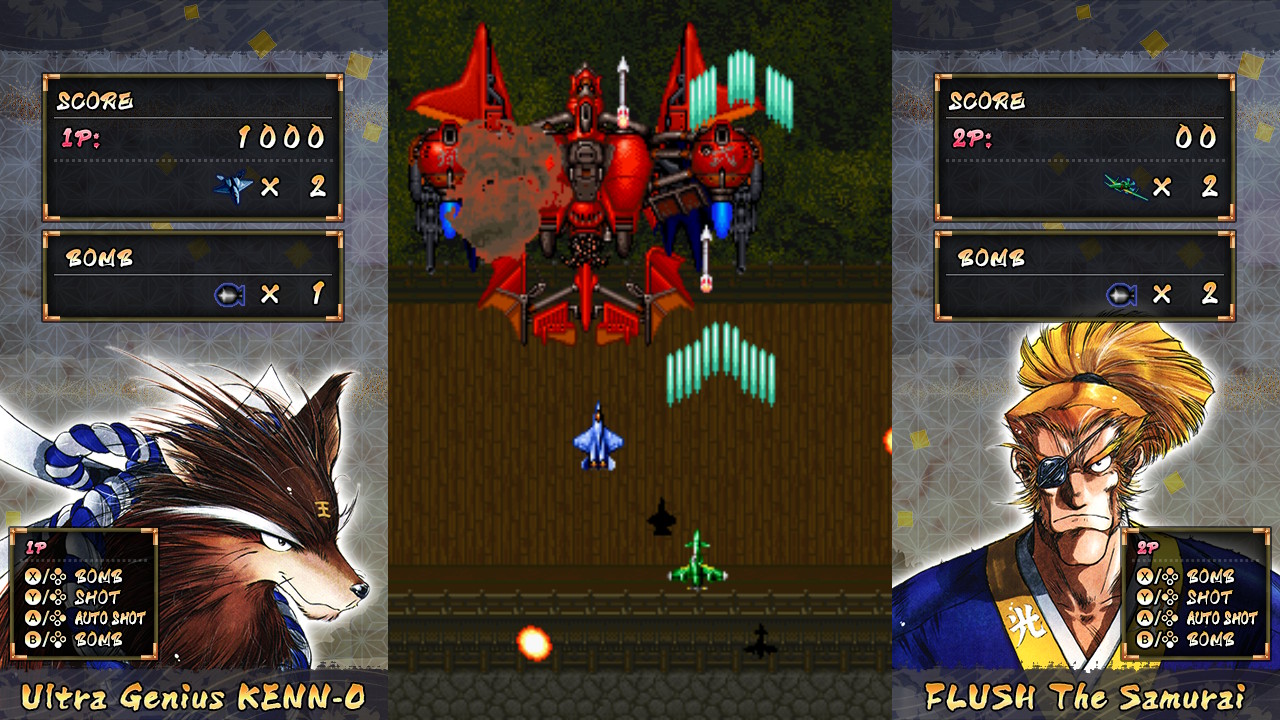 There’s a ton of respect being given to the teams that are porting the classics to the Nintendo Switch, and I think it’s well deserved and equally given. Sure, Hamster may have screwed the controls a little on some NEO GEO ports, and Johnny Turbo needs to deliver more than just one title, but the fact remains is the Switch is gaining momentum to be a solid time capsule of current and older titles. The arcade shooters remain some of the greatest experiences that haven’t quite gotten their due, mostly because of the way modern machines and TVs are created, so I’m glad to see that Zerodiv is taking their job equally as seriously. They’ve already brought a couple of fantastic shmups from Psikyo to Nintendo’s handheld daydream, and now they’ve moved forward again with Samurai Aces.

One thing you’ve got to keep in mind is the massive appeal that Psikyo games bring, and that is equal parts concept and execution. On the one hand, you know for a fact that you’re going to be getting an excellent, difficult shooter. Psikyo always understood their audience to be the faithful and the fanatical, those who’ve spent more in quarters at the cabinets than you’ve spent in dollars at the vending machines. Samurai Aces is a title that’s built to spill with some amazing execution in terms of borderline bullet hell (that we’ll get into later). But, more importantly, the game is also completely, ridiculously and rapturously bizarre in ways that only Japanese developers seem to understand. Inexplicably set in the Sengoku era of Japan (which seems to be a popular backdrop for many games), you take the helm of one of six fighter pilots, each with a brilliant plane and their own motivation for taking to the skies (rescue their sister, find their master, get home for dinner, etc.). There’s too much to unpack in terms of each character’s reasoning for play, but the fact remains is they have a catalyst that makes sense for their character and their character only.

Once you digest that, you can strap into the plane that’s specially designed for each pilot and move forward into multiple levels of frenzied, murderous joy. Each plane has a standard weapon that gets powered up multiple times if you can grab the P-items without getting shot, and reaching the maximum level is almost a necessity to get anywhere in the higher difficulty echelons. You also have a bomb move that can be recharged through pickups and is a real Hail Mary situation in terms of execution. Some planes create massive bombs that occupy the entire screen and wipe out minor enemies but just damage and piss off bosses. Others have a more directional, powerful attack which can change the game as long as you’re mostly accurate. In all cases, I recommend remembering that there are two different buttons for your standard shot: one that’s autofire and one that’s manual. Don’t mix them up. The last thing you want is to be leaning on the fire button and then have everything screech to a halt because the game is waiting on you to depress your finger. 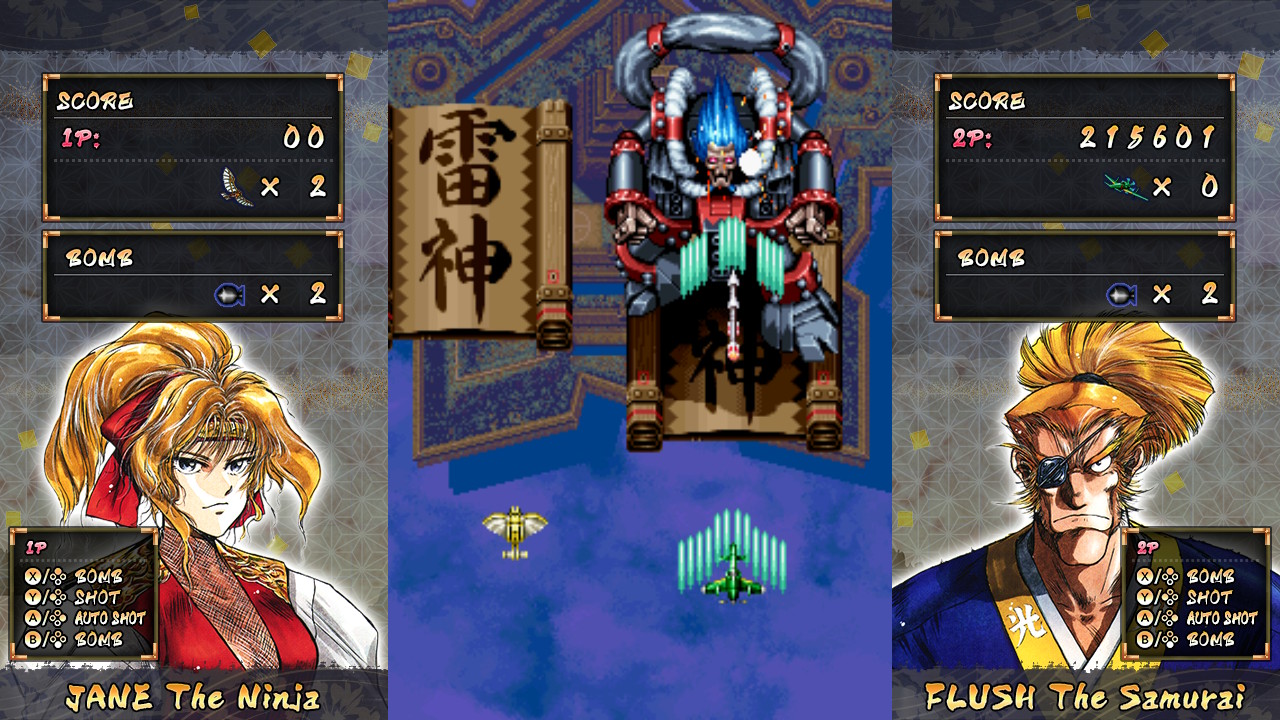 In terms of control, Samurai Aces is incredibly tight, and relies on the necessary form to win in lieu of flashy and over-the-top ideas. When you first play, the ship may seem to move rather sluggishly in comparison to other vertical shooters, and it can be frustrating, especially when power ups, which bounce around the screen, take up residence in the upper half of the screen. But then you start to realize why it’s so important for the slower movements: dodging. You very, very quickly are introduced to some serious bullet density, and having faster thrust and darting would only end in you more easily crashing into an errant bullet which erases all your powerup time investment. In order to make sure you live, you have to be stealthy and subtle, accurate and quick without being fast. There’s no time limit on this game, and this isn’t something where a speed run is really possible beyond the first or second level of difficulty. You need to patient and learn through trial and error. And, as a Psikyo shooter, Samurai Aces is going to have a lot of error.

There are several difficulty levels, with 4 being normal and 1 given the title of “monkey” (which is, inexplicably, below 2, Baby, and I feel most babies would perform worse than monkeys). Starting on level four without being limber and ready results in three deaths before you even get a handle on the controls. As humiliating as the monikers may be, start on the lower settings unless you’re an old hat at Cave, Touhou and other such shmups. Even then, you’d be surprised how quickly the screen fills up, but I’m still wont to call it a bullet hell title. That’s because most of the mayhem comes from enemies who have low health, not a singular entity that’s destroying you. If you’re fast on the shot and accurate, you’ll be able to keep things under control until you get to the end bosses for each stage. Here, sure, yea, bullet hell, but that’s a surprisingly small part of this shooter in comparison to most of the action,.

Beyond the action itself, the artistic direction and creation of the enemies and atmosphere is something that truly makes Samurai Aces pop and excites the player. Sure, you get your run-of-the-mill fighter pilots in jets, but everything goes well beyond that with a ton of enemies created in mythological homage to Japan’s roots. Giant daruma ships fire from all angles, kappa submarines surface to shoot missiles, and multi-headed tanks literally spit bullets at you. It’s got that edge of bizarre, almost absurd creation that keeps the player engaged, making you constantly spout “The hell is THAT?” while also dodging the many bullets that come with it. All of this is against a beautiful backdrop that takes you from the Japanese countryside to a mashup of modern and ancient Tokyo, complete with shogun warriors who seek to swat you out of the sky. It’s a feast for the eyes. 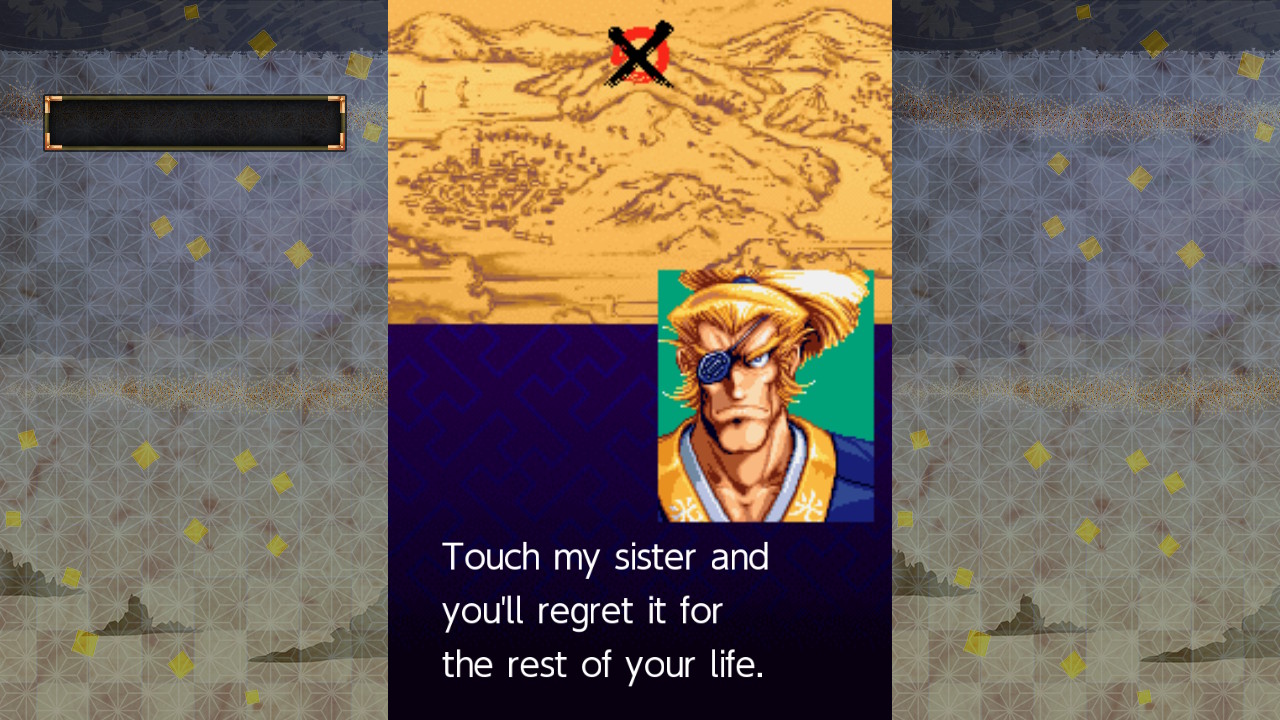 And, again, Zerodiv uses the best advantages of the Nintendo Switch by allowing the game to be played in vertical mode when handheld (and even vertical on the tv, if you’re fancy). It’s such a welcome and comforting option that really shows a matter of understanding for the shmup audience and what they most want out of a game. HD, 4K graphics and 5.1 surround sound? Naw, just make sure we can play without massive framing on either side of the screen. Although, if you do play in traditional landscape, you have great information displayed, like the pilot’s name, his/her profile picture and your score as things continue to go insane. It’s certainly not a waste of space, although most serious players will give it up in favor of, well, a better appearance.

Samurai Aces is a fantastic addition to any shooter fans’ growing library, and it shouldn’t be missed if you’re itching for something that’s both retro and still incredibly polished. Cheers to Zerodiv for the great port job, and I’m glad that we may yet still see the best of Psikyo in the months to come from these very competent and knowledgeable people.