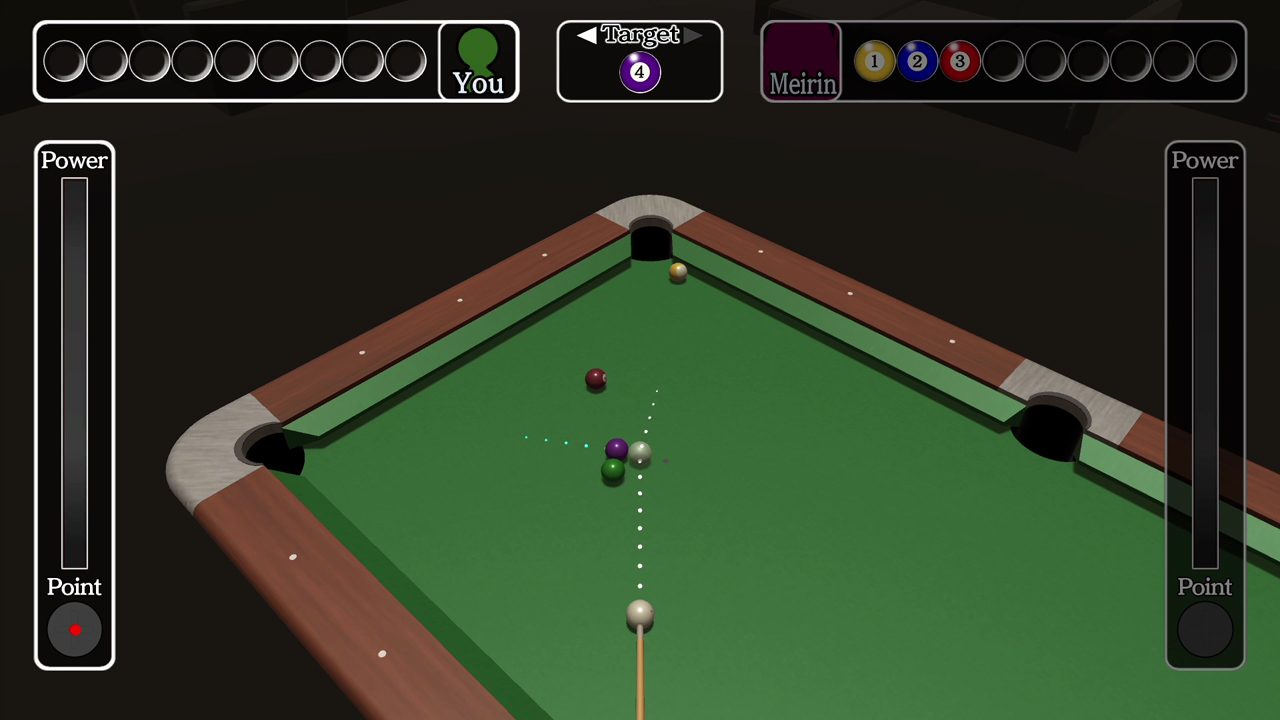 Sometimes, waiting for a certain style, or genre, of a game can be like waiting for a bus. When the title you’ve been waiting for comes along, another two or three turn up at the same time. This can certainly be said about those wanting a pool or billiards game on the Nintendo Switch, as this month has seen a sudden fluctuation in the release of titles that emulate the sport. So, let’s jump the ‘cue’ and take a look at Pool Billiards, a game developed by OHRUSSIA and published by D3 Publisher.

Upon loading, you are presented a selection of menus such as options, instruction manual and play the game. The options are minimal, but functional, and the instructional information is a nice inclusion if you’re not familiar with the mechanics of the game, or even pool or billiards themselves. Selecting to play the game then offers several modes of participation; single, vs com, vs 2p and tournament play. Once you have chosen your preferred style of play, you are then given three variations of pool/billiards with which you can play; the classic 8-ball, 9-ball and rotation.

With 8-ball, you can play the classic spots vs stripes or solids style of play, 9-ball offers a variation where the balls need to be potted in ascending order from one to nine and rotation plays in similar fashion to 9-ball, but you can pot any ball number as long as the correct order of numbered ball is struck first. Each of these game variations can be played in single player, versus the AI, 2-player local and in tournament mode. Upon choosing your game, you are then presented with a character selection screen; the first of which are available immediately with several others who need to be unlocked through further play. This screen immediately starts alarm bells ringing with no distinguishable features of the character models, as they only appear as silhouettes; despite playing against a virtual opponent, they contain no form of personality, unfortunately this soon becomes a trait that follows through the rest of the game. 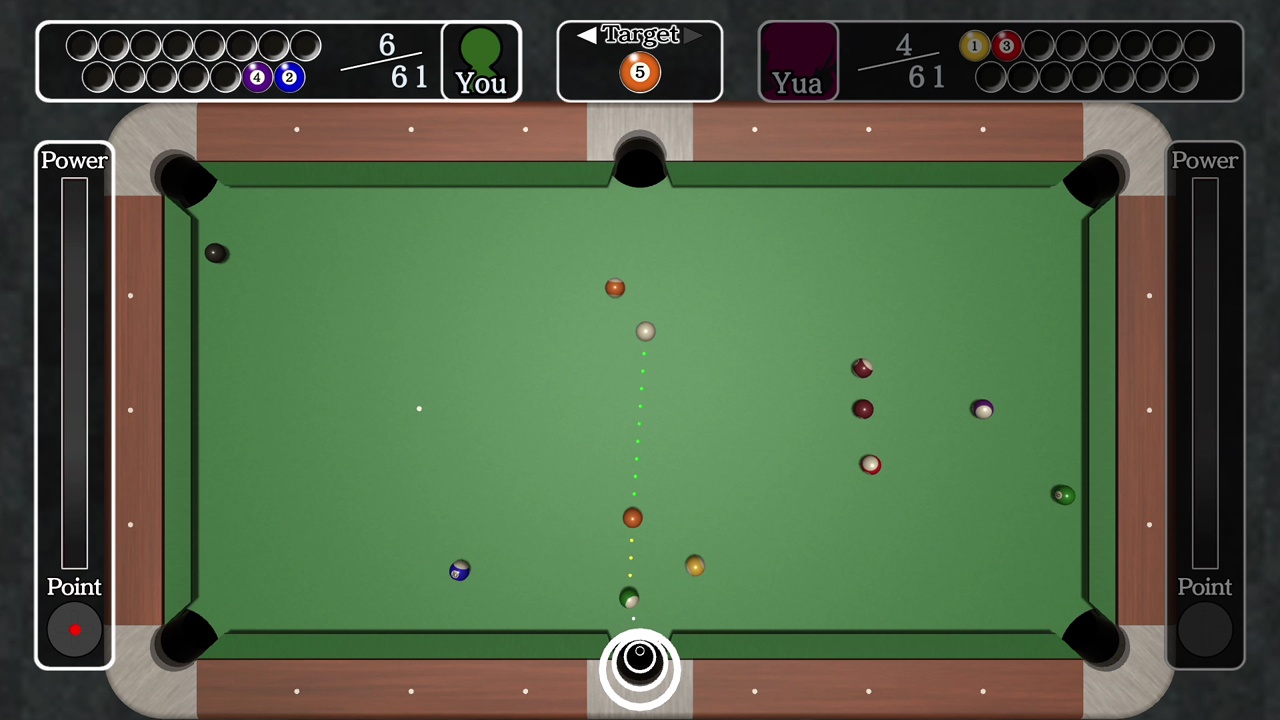 The mechanics of playing a round of pool/billiards is solid enough here. The ball models are satisfying, as are the physics which gives each strike, bounce or ricochet a satisfying feel to them. The inclusion of several forms of guiding lines help with lining up shots, as does the inclusion of two main camera angles; namely a first person 3D view and an overhead table-top made. However, the table upon which you play lacks any real texture quality, which gives the impression of a baize that is particularly hard and solid rather than a soft, materialistic feel. The aesthetics here, present a very PS2 era style of graphics which look particularly dated in this day and age. There are no background elements beyond the tables either; giving the impression that you are playing in a pitch black room with just your table highlighted under a spotlight. Unfortunately, this just all adds up to give the overall presentation of the game a feel that it’s been very lazily executed. The game plays well enough and is particularly smooth, running at 60fps, but, with a lack of synthetic substance, the overall appearance lacks any sort of character.

The HUD elements contains useful information such as balls sunk and the next target ball that needs to be hit. A power gauge highlights the strength of each shot, powered by the R button and released with A, as well as an adjustment for striking the ball with spin or draw to each shot. Again, the information is basic but perfectly adequate.

The game modes on offer add a little variety to the gameplay, however, a lack of any online features severely limits any longevity in its appeal. Whilst the AI offers a decent and varying challenge, it’s a format that will eventually grow stale quite quickly. Tournament mode offers a presentation that sees you competing in world events, such as the London Cup, Tokyo Cup or Hong Kong Cup to mention but a few. However, this premise is essentially just a cosmetic inclusion as the game plays in exactly the same way as any of the other options. Although you do compete in a knock-out style of play, the tournaments offer no variation in tables or backgrounds which again, promotes a feeling of no character or of anything exciting that is particularly happening. 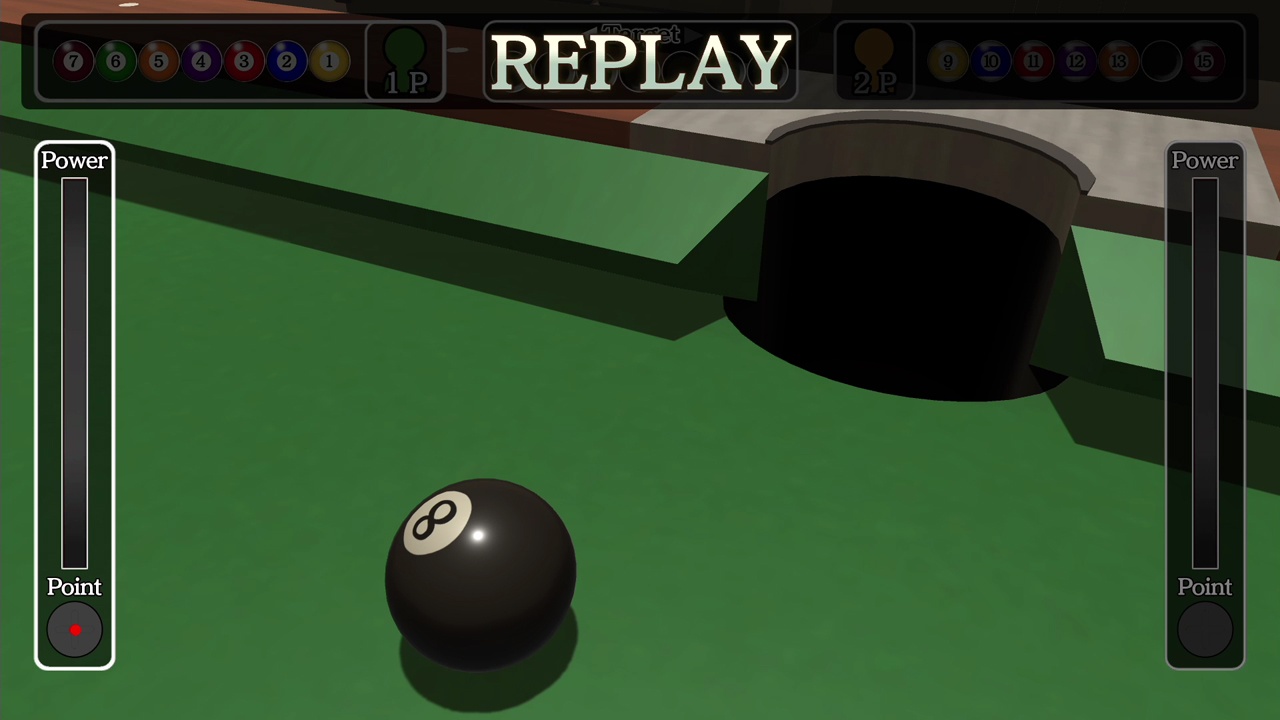 The option for a local 2-player match can spruce things up a bit; adding a bit of couch fun when competing against a friend. The inclusion of motion-control can also to the fun here, as each joy-con can be used to strike the ball with quite a satisfying thud. It almost feels as this has been implemented as the main selling point of this game with its lack of any meaningful graphical viewpoints. However, despite its mechanics, it all still feels a bit gimmicky; especially when playing in the single player modes.

The presentation as a whole, although rather bare-boned, is adequate with regards to some elements of the gameplay. Each pocketed ball offers a slow-motion replay and the camera follows each shot played; although this mechanic can quite often lose the path of the white ball as it only focusses on the ball that was struck. This can lead to you looking for the where the white ball has laid following your next planned shot. Overall though, the presentational style of following the action upon the table is perfectly functional and there’s nothing particularly game-breaking here but then again, there’s nothing particularly ground-breaking either.

While the game does offer a solid experience with its mechanics of playing a frame of pool or billiards, its severe lack of textural quality, graphical presentation and overall feeling of immersion severely hampers any longevity in terms of its gameplay to keep you coming back. It’s a shame that the developers didn’t incorporate any online component, as this would have given the game a whole new level of playability. It’s not a particularly bad game, it’s just not very exciting and looks particularly last generation, or even the generation before that. It’s a shame, as the Switch is more than capable of handling more than what this game is offering here. When you consider that you can play far more superior versions of the sport on your phone for free, then this version is simply, not particularly justifiable as a purchase.