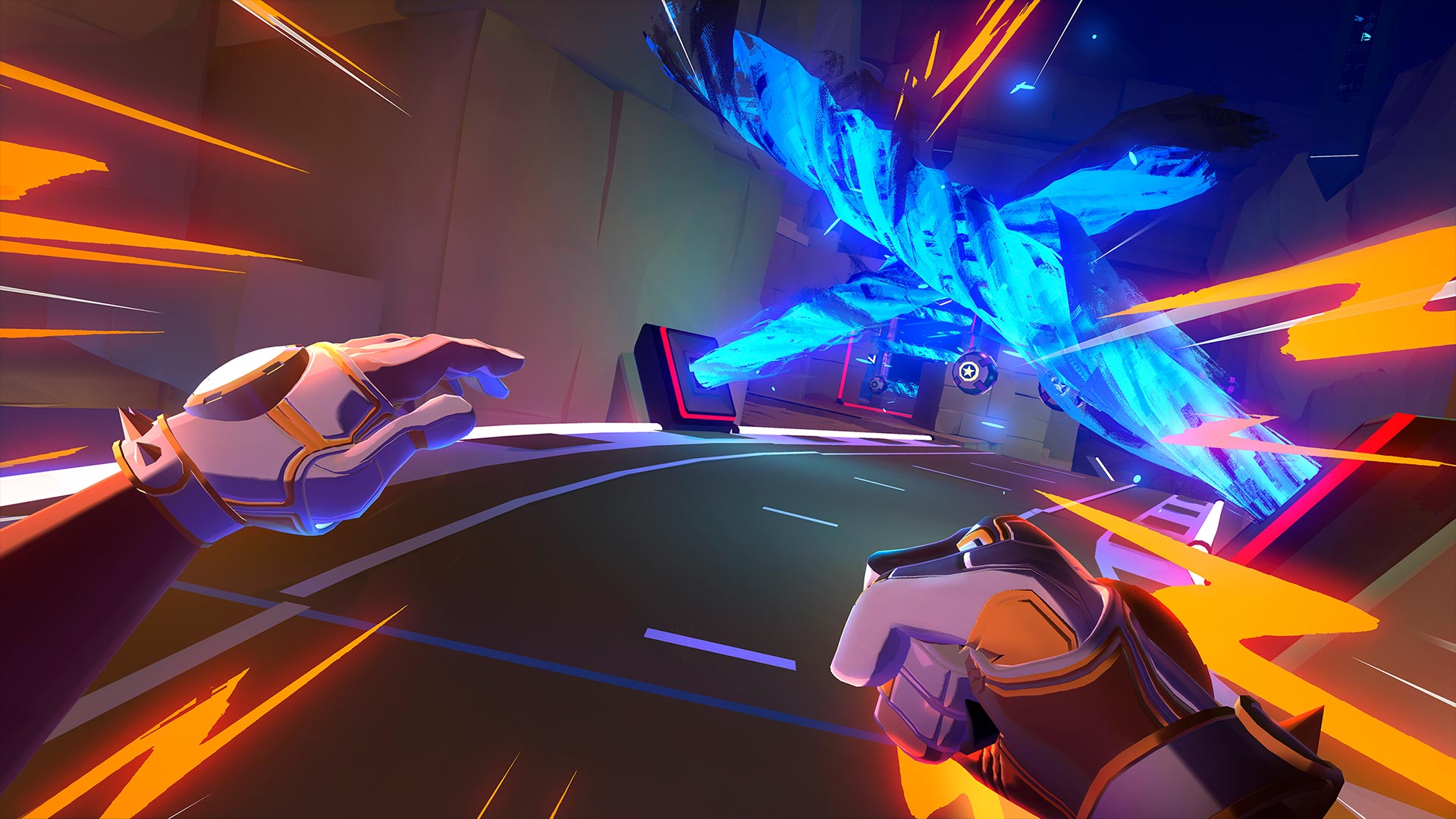 For my reviews I tend to play a little, write a little and repeat until the game and review are completed, but with Sprint Vector the new VR title from Raw Data developer Survios I have had to change my approach drastically. This is because of one simple aspect, the effort you put in and the exhaustion you feel when you finally decided to switch if off is just unbelievable. My entire upper body was pumped to the point of explosion and it never registered until I convinced myself I needed to take a break, the thrill and exhilaration you get from playing Sprint Vector once you master its various controls is something I have never had on PSVR.

The closets comparison must be Superhot VR, another title that demanded continued play due to its addictive and cool gameplay along with a full body workout. To explain Sprint Vector in simple terms would be to ask you to imagine you’re a speed skater (ice or wheels) playing in a world reminiscent of a level taken straight from Sonic All-star Racing or Mario Kart.

All the usual power ups are there for you to collect, used either to help you or hinder your opponents. The tracks are littered with all manner of obstacles and dangers to avoid including Jumps, 90 degree corners, rocks and varying sized gaps to jump. All your bog standard and expected hazards but avoiding these are certainly easier said than done due to the speeds you can achieve once you’ve mastered the movement aspect. 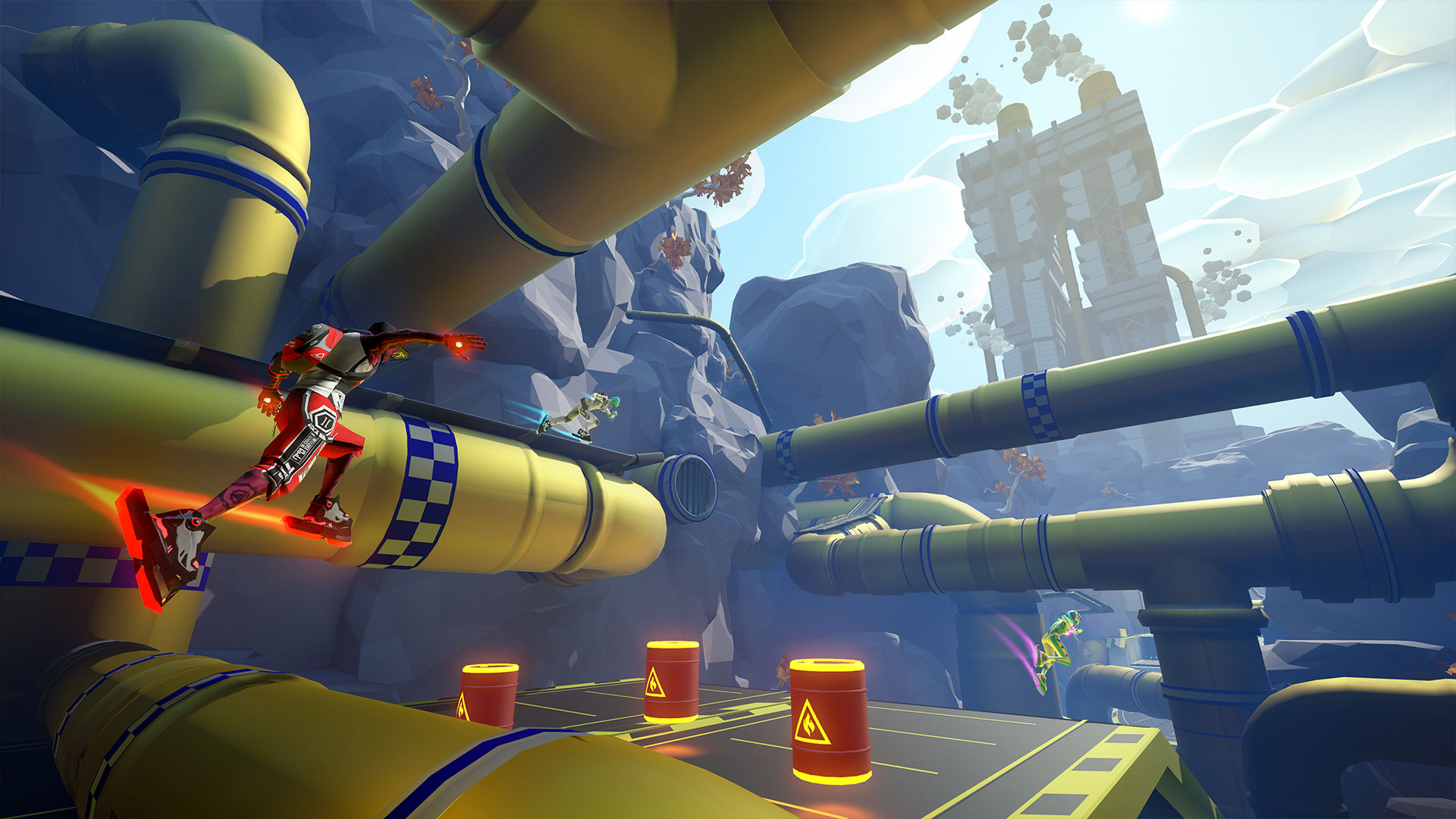 The controls in Sprint Vector initially feel very overwhelming (and some may never fully adapt) with the player required to press certain buttons for certain moves, all while you are frantically waving your arms back and forth. This main movement is called Your Stride and it requires a good fluid arm motion along with well-timed presses of the triggers buttons. Once you have got your rhythm into an acceptable smooth motion your character will move forward gaining speed dependant on how fluid and fast your stride is. And speed is the main factor when playing Sprint Vector competitively because either on the single player with AI bots or online the speed element will help boost you over massive gaps, give you extra air time to avoid the various ‘instant stop’ obstacles scattered precariously on the track’s or just plain overtaking.

While you are constantly Striding your PSVR headset acts as a steering mechanism requiring you to tilt your head to move your character, but this is only for slight turns or shifts left to right with the bigger and sharper turns mapped to the face buttons. Jumping is an essential skill that needs to be mastered early to get on in Sprint Vector. And this is done by pressing and holding the move buttons on the controllers, once airborne you can perform other tricks to help gain that little extra hoping to result with a better placing.

Also, something strange I felt during the jumps were my knees slightly jolting on landing which is a sign of good VR. All this may sound overwhelming but as I previously said it initially feels like too much to quick but once you have mastered the basic movement you can then move on to learn the extra skills available.

Sprint Vector has twelve tracks on offer beginning with the basic to help initiate you in to the world and grasp the games mechanics. They progressively get more difficult with the latter levels incorporating every hindrance you could possibly imagine, but once you have reached these I would presume the controls have become second nature or your just damn lucky. Most tracks take from two minutes up to around five to complete but they all have multiple routes and short cuts, so replaying them to gain that elusive 1st place or to see every route is simply something you will want to do.

Adding to the single player roster are nine challenge tracks which are not rehashed from the main game. I found these to be extremely difficult in the beginning but once I had played the single player tracks and learnt the more complex controls I spent most of my game time completing in these. “Time trial” needs no explanation, “Collection” tasks you to speed over coins dotted around the courses to increase your time so you can continue to the next checkpoint. And the last option offered Is called “Hardcore” and believe me it’s a very apt name as it will challenge everything you have learnt, requiring inch perfect movements at break neck speeds with not a single checkpoint in site. Online is basically the single player including online leader boards to climb and the more realistic challenge of proper players who can act very randomly compared to the A.I bots from the offline version. The various online games I have now had time to try we’re brutal and I can see this game becoming a home for the extreme challenge gamer which will inevitably alienate the late comers to Sprint Vector. 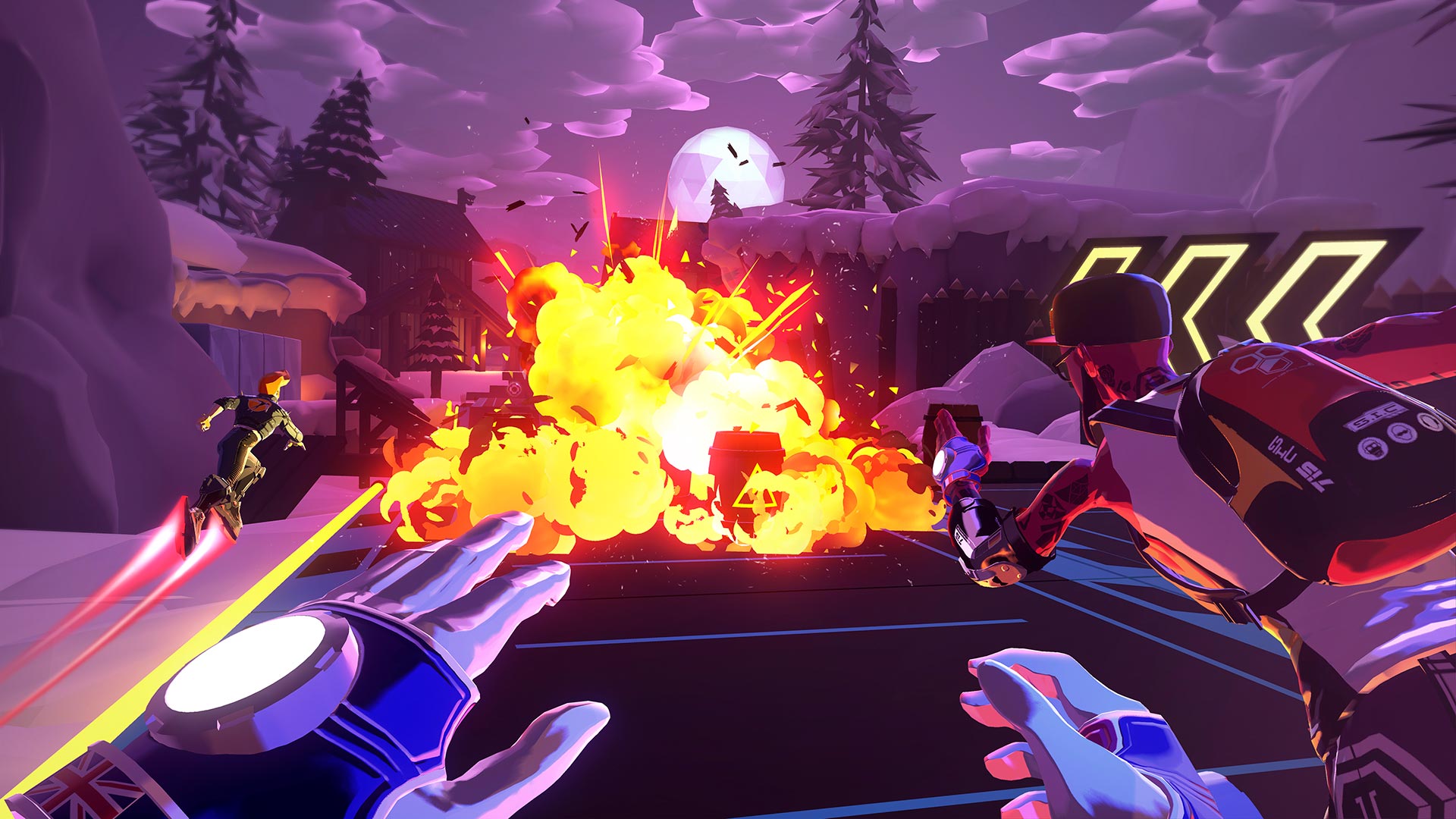 Graphically Sprint Vector is blistering bright and colourful with beautifully designed tracks and a nice minimal soundtrack. Even though you are speeding through the track’s I haven’t (yet) seen any slow down or visual issues of any kind. Which brings me nicely to the VR implementation, this game has you travelling and manoeuvring at blurring speeds with such bright colours whizzing past I did expect to at least have some subtle kind of motion sickness even though I’m luckily not a sufferer. But the developer has implemented something they are calling the “Fluid Locomotion System” which for some unknown and mystical reasons seems to be able to remedy most player’s motion sickness. It’s a bold claim and I’m sure some gamers who really have motion issues with the slightest of movement may not benefit but from reading various players comments online it seems to have some credibility to its claims.

With such a demanding game there must be some issues and unfortunately there are. Although not game breaking the motion tracking can falter randomly but this could be attributed to the hardware and not the game itself.  And on occasion you can suddenly shift on the track without your input which can be quite jarring and cost you your current position, but considering everything involved to get this game to work as well as it does you can forgive these minor and random issues. Another is the controls, they all work perfectly well but with the amount of movements and button presses to actually get you moving and stay moving, it may become too much of an effort resulting in players just giving up.

Overall Sprint Vector is a truly amazing piece of VR gaming with stunning track design and the breath-taking feel of speed. With good variety of challenges offered both on and offline it will ensure your PSVR gets the full attention it deserves. One recommendation I do have is if you are buying this game and you have a gym membership then cancel it, as this will give you a workout that no gym can. Hands down one of the best VR titles so far.