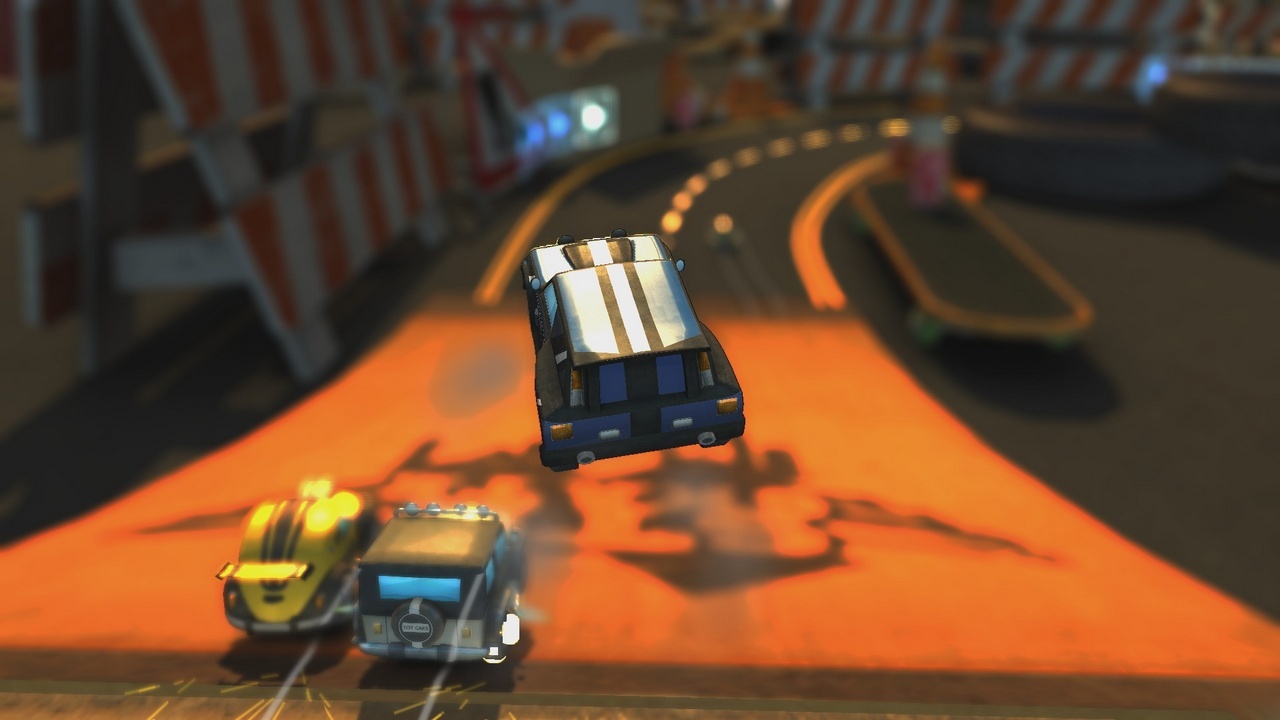 Super Toy Cars is Eclipse Games’ table top arcade combat racing game, which has finally made its way to the Nintendo Switch. For £7.99 ($9.99 for those of you in the USA) and with 642.78 MB of data to spare, you can download this title on all its fast paced racing glory, following either the solo campaign or racing against your friends in multiplayer.

The solo campaign consists of eight episodes, each with 6 event for you to collect coins which are then used to unlock the later levels. Each event can consist of one of five distinct game types. First in the normal race, this can consist of 2 or 3 laps in which you do whatever you can to come in first place. Next is elimination in which every set amount of seconds the player in last position is eliminated until there is only one remaining. Evasion holds the same concept as elimination, however now the track is covered in mines which get in your way making it much more difficult to stay in first place. Next is the time trail in which you must get the best time on a lap of a course to come in first place, and finally the time attack in which you have to reach checkpoint on a 2 lap race before the timer reaches zero. These game types add variety, making it much more fun than if the game only consisted of normal races, especially the evasion tracks which add extra difficulty. There are sixteen cars available in the game, each one having particular attributes that make them more appropriate for different types of races, however as you would expect, the more expensive cars are better for the later courses. My favourite car of the selection is the Horns Hot Rod which allow you to drift better when going around corners, meaning your boost gauge is always full allowing for ultimate bursts of speed. 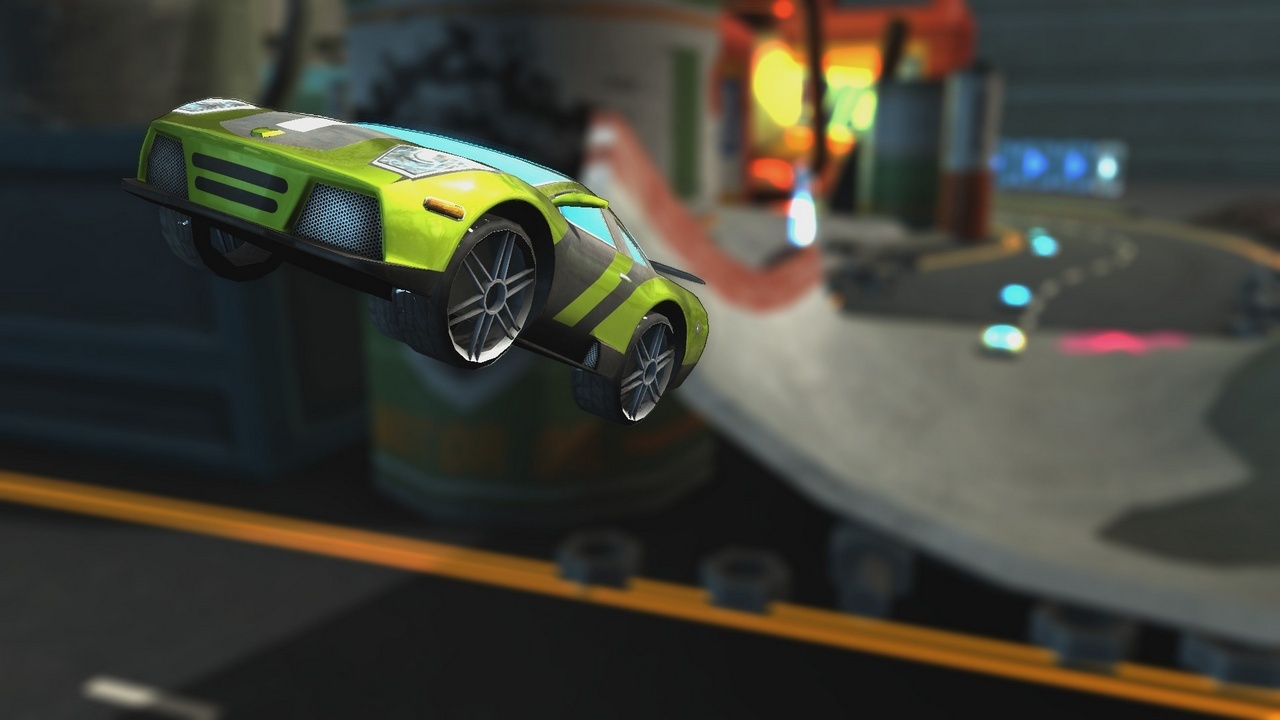 The presentation of the game is wonderful, with 3D rendered colourful cars and environments. The colours for each stage pop and feel appropriate, holding a theme whilst to providing variety so you don’t feel like you’re just going around the same track every time with just a different lick of paint. The colours for each stage pop, and the cars are beautiful in design each adding something quirky to familiar designs, bringing to the toy car aspect of the game to forefront, making it believable that these cars have just been picked up from a child’s toy chest. Each automobile has at least 4 different skins as well making them further customisable, however it isn’t obvious how you unlock these patterns as it seems i’ve just unlocked random ones for random cars when I win races in the campaign mode, which could be annoying to completionists out there. The Music is provided by the Punk/Rock band Spin Wires, offering fast paced beats for you to race too, Slam Van being my favourite track to listen to as I boost my way to victory.

The gameplay is what you would expect from what at its core is a racing game. The progression comes from the aforementioned event in which you collect coins based on the position you place in. Each event has the possibility of 10 coins for coming in first place, meaning there are 480 coins in total for you to collect, offering up some intense replayability in order to become first in every event possible, which is harder said than done due to those pesky evasion levels. Each race you participate in also gets you money which you can use to expand your collection of cars and upgrade the ones you already own. However this can also be seen as limited as you can test every car for free in the quick race menu so you can decide which car suits you best without wasting cash. Each track also has a range of items that you can use to aid you in events such as: rockets, mines, paint splashes, instant boost, and my favourite, a giant magic 8 ball which you can then launch at the other racers and cause some carnage. I have some issues with the gameplay, such as the initial handling of the cars took a bit of time to get used to as they don’t always turn corners well, even cars with better handling, however this just means you have to become better with your drifts. I also found that sometimes the game could lag if too many things were happening on-screen at once, however this didn’t happen often enough for it to become a nuisance. 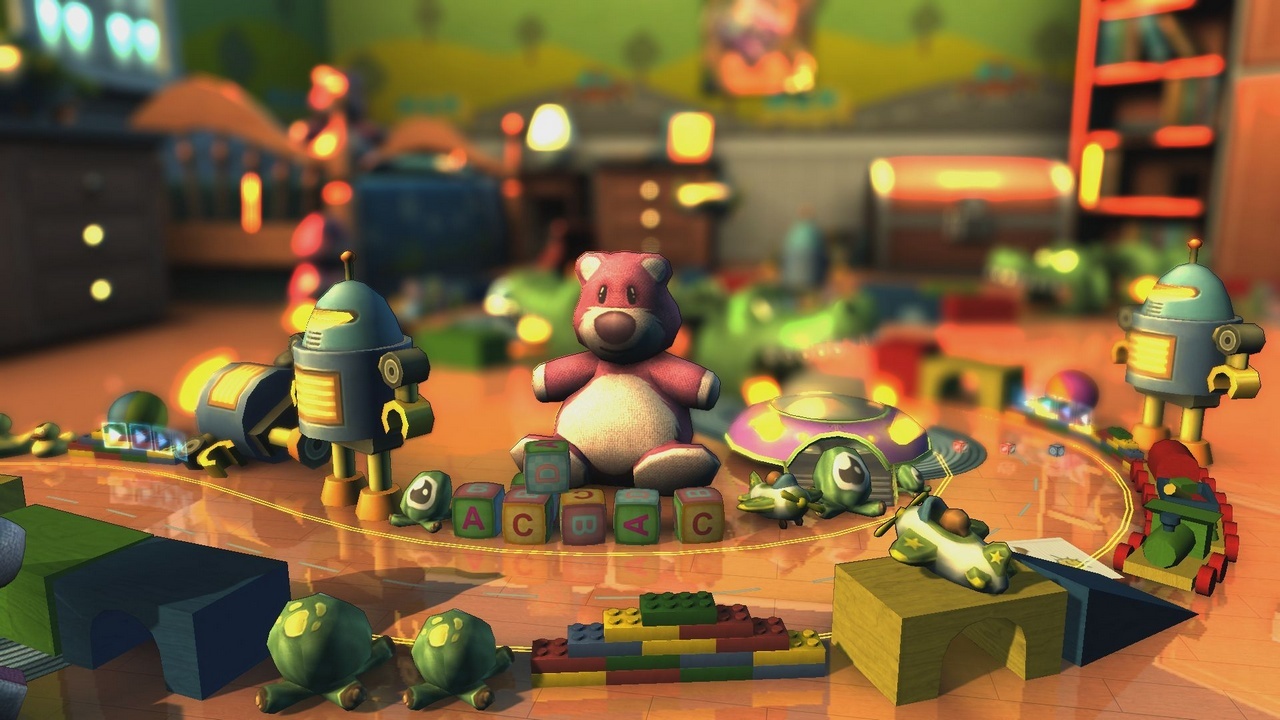 I have some high praises for the game, including its faced passed gameplay and its colourful and creative environments dragging me in. An improvement I would suggest to make the game better would be, first sort out some of the handling for the cars, and secondly tinker with some of the in-game physics, especially in some of the half pipes scattered on different maps. They are a nightmare to manoeuvre through, and most of the time I found myself being flung off the map loosing valuable time during the later races which would become frustrating. However these physics also provided for some fun moments, especially during multiplayer when a car would unexpectedly jump higher than expected or be hurtled off the map by one of those deadly magic 8 balls.

In conclusion, Super Toy Cars is a super fun racing game that I would highly recommend for you to try out for yourselves, with enough to entertain yourself, or your friends for hours and hours, with enough content and collectables to keep the completionists at bay as well.