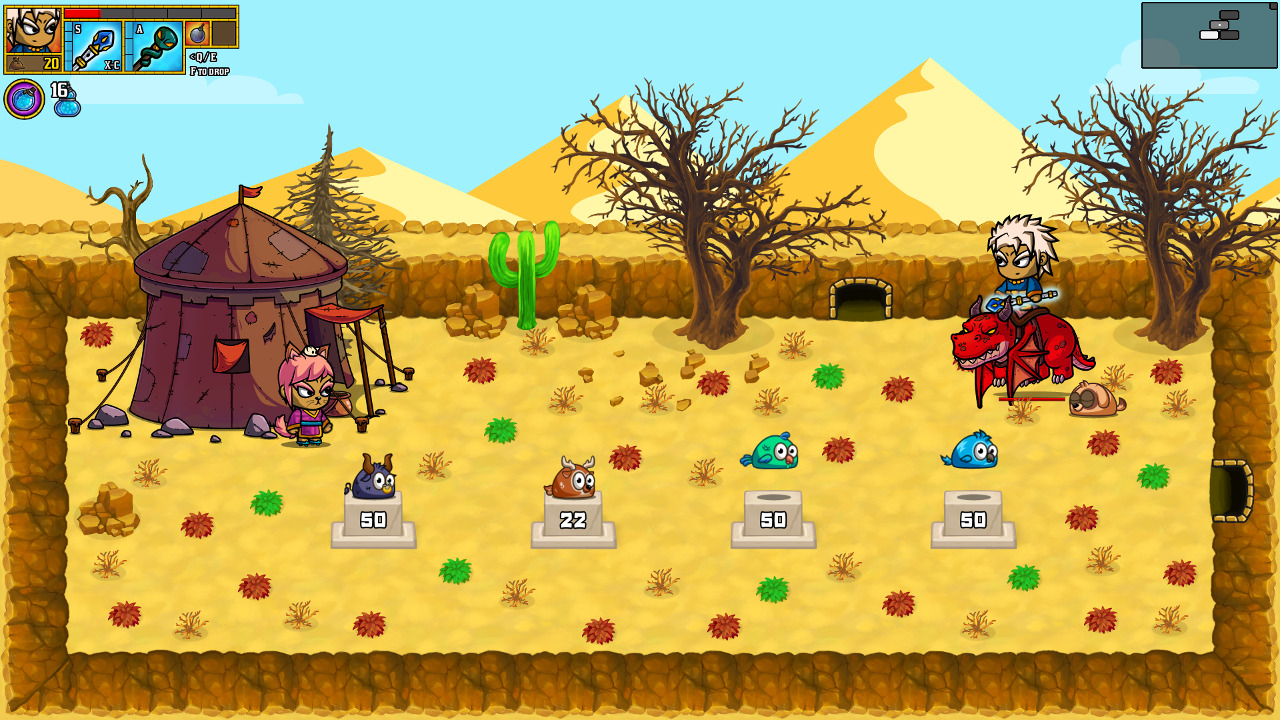 More than anything else, a good roguelite title is built around compulsion. No matter what happens in the previous iteration of whatever was generated, you feel like you wanna come back and try it again because you know something is going to happen. Maybe you’re certain you’ll see a rare drop this time around, or maybe there’ll be a better layout of the enemies to allow for stronger progression. More importantly, maybe going back one more time will allow you to unlock more stuff, which will only encourage you to do it even MORE times. It was the reason that I got insanely addicted to games like The Binding of Isaac, Deathstate and even Neon Chrome. Now, a surprisingly complex and deceptively cute addition throws its hat into the ring, and I’m confidently adding Bigosaur’s Son of a Witch to the mix.

Son of a Witch has a slightly confusing main storyline, not gonna lie, but it at least explains the way the levels progress in the main story mode. You play the child of a Witch, who was living in the forest with her kids very peacefully until the kingdom came a’calling. They want your mom, for reasons, and they won’t take no for an answer. Naturally, as good children, you decide to go storm the castle and take your mom back, as mother dear not only taught you a thing or two about magic, but also raised a pretty damn good fighter. This would be a fine setup all on its own, but we also need to include the fact (this comes up in the opening crawl) that goblins are angry about someone stealing their Tar and ready to murder everyone they come across until they get it back. In truth, none of this is important because, like all good procedurally generated games, thinking too hard about the plot leads you nowhere and you’re still killing a ton of bad guys at the end of the day, so whatever.

Son of a Witch plays out in a action-oriented, dungeon-style adventure game in which you gotta get through several levels, killing mobs and defeating bosses on the quest to get to your mom. As you go through different rooms, the number and type of enemies within will be totally different, from arenas with a single soldier waiting for you to a horde of different goblin types, additional traps, various treasure chests and, as always, massive, drastically crazy bosses. Enemies and chests will drop items of various importance, including potions and scrolls with unknown effects (though most of them positive), weapons of ranged and melee type (with occasional elemental attributes), and coins to purchase stuff from the shopkeepers that exist throughout the realm. A great joke that Bigosaur plays on you during the tutorial is letting you know that you can kill the shopkeeper to get all the items for free (which is true), and then probably having a good laugh whenever you do that in a main game and watch your life get beaten out of you by the shopkeeper’s unseen bodyguard. But how else can I afford to get two or three pets, each of which gives a different passive bonus or combat mechanic? Damn economics! 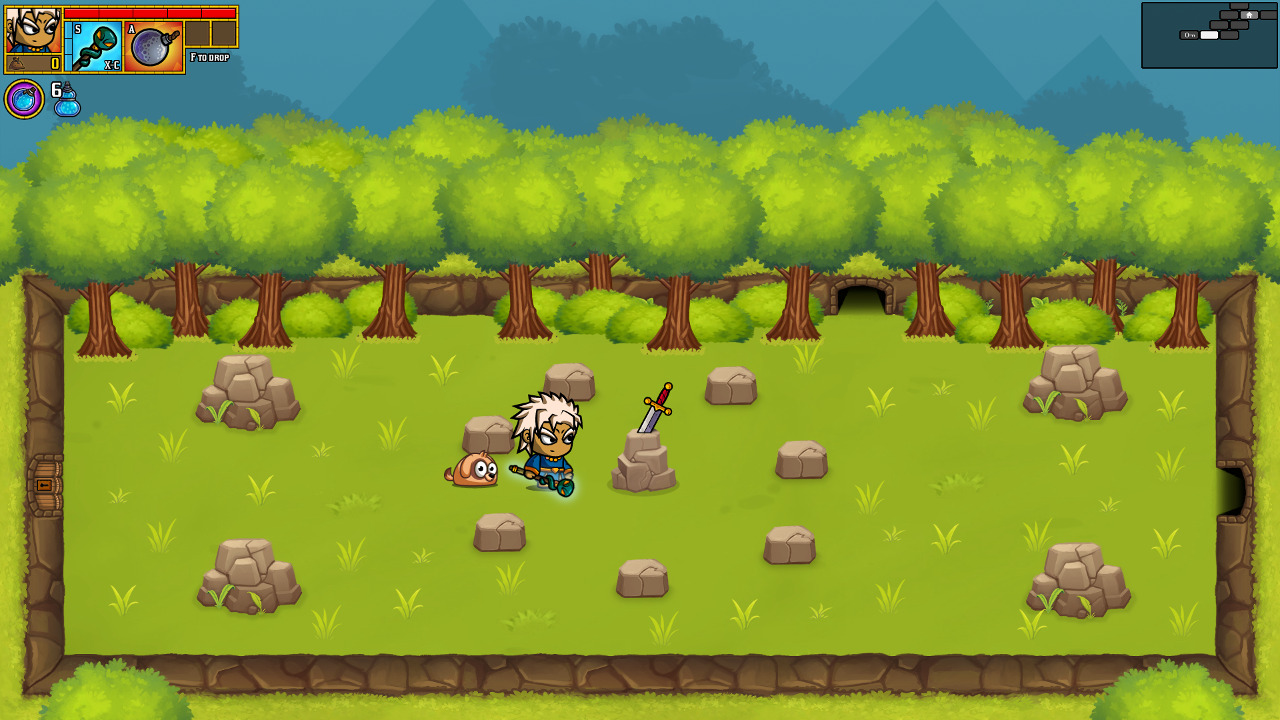 Having only picked up the game recently, I wasn’t able to see the evolution of Son of a Witch from where it was at/prior to launch to the current state, but a read through some old patch notes tells me and shows me that the title has undergone a tremendous amount of additional content being injected in without a boost to the price. There are several different character types to unlock (archer, barbarian, paladin, etc.) that come from accomplishing the game in different ways. There’s an entire additional mode of Barbarian Trials that’s mini feats that you must complete before unlocking the Barbarian, and you can’t even attempt these trials until you beat the Regular Game mode at least once through, but you can still unlock several other characters just by existing within the game. The Archer, for example, will be available after you gather one hundred arrows for the archer NPC that you occasionally find within the game, which is a challenge unto itself, given that you have only two additional “item” slots when starting a regular game (though it can and will expand through pickups).

For solo players, the RPG mode of Son of a Witch is probably your best bet for a feel of what the game could be, even if it’s not authentic to the core version. With RPG mode, you don’t automatically get game over when you die, you start out with more slots unlocked in your inventory, and there’s a better chance to learn the lay of the land for each of the areas in a more trial and error way. For example, getting into the castle for the first time will greet you with both soldiers and goblins, and you get to learn that these two different mobs do not like each other, and you might be able to tuck away and watch them fight until there’s just a few weakened mobs left. Or to find out that the bosses, which are large, scary and time consuming, also hate their own underlings (which continually spawn throughout boss battles) and you might be able to get the head honcho to deal with the goombas through no effort of your own. Of course, you remove a bit of the procedural element with this approach, but it does make for an easier dip into the game overall.

With Son of a Witch, the ability for the game to mold and shape itself to your own style of adventuring is what really fascinates me. If you prefer hack-and-slash, you can just get in there, right from the very beginning, and beat things to death with a light and heavy attack of your sword, ground slamming onto baddies that you knock down and rushing them with your powerup attack.  If you’re fortunate enough to find a magic stave (or pick one of the classes that starts equipped with one), you turn the game into a twin stick shooter, allowing you to slowly but surely pick off enemies from a distance, though quite a few have ranged attacks of their own, so you can’t get complacent. Moreover, this is one of those games that also allows you to change tact immediately if a better opportunity comes along. Sure, I like being a wizard and all that jazz, but when one of the goblins drops that delicious throwing axe you know I’m going to try and go full berserker even if I’m tripping over my robes. 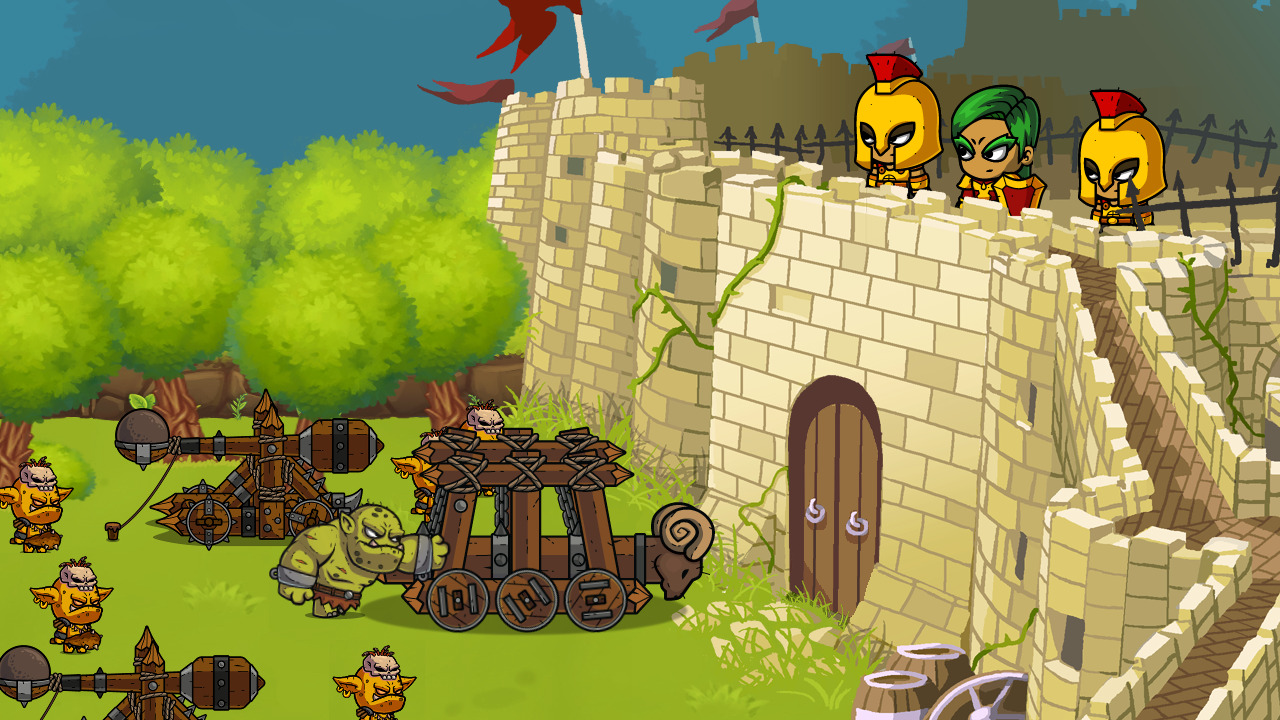 Boss fights are something to behold as they give you the same kind of feeling that other great roguelites deliver with their bosses. Upon initial viewing, hopelessness and fear are natural reactions: a majority of the bosses are positively huge, with several being two bosses at the same time. They can devastate you with a single hit, have multiple forms of attack, large life meters and have a continual stream of minions appearing throughout the fight. Once you begin to recognize patterns, however, you can unpack the box and really get into it, taking out the big bads with either a lot of patience (running around and striking sparingly is always effective) or a lot of guts (look for tells, know where the hitboxes are, never surrender). It makes boss fighting fun, and it’s where some of the best gear and power ups come from, so get comfortable with the massive monsters that make up the level ends.

As always, Bigosaur is focused on the multiplayer aspect, and it really works for Son of a Witch. While the game is enjoyable in a single player endeavor, having another friend or three take over additional roles in the party makes for a tonal shift in the game. Going from just your average smash and grab run, being able to make a full on D&D collective allows for better strategies to develop, more hands to handle important loot and items, and delegation of power to make sure the game runs successfully. With the cutesy avatars for all the roles and the lack of bloodshed, it’s no problem to stick a controller in a child’s hands and ask them to tank while you do a lot more of the backstabbing and item control. Sure, they may not love it, but they get to play, and that’s what’s important. Also, for those not exploiting children, having friends compete with you in various fields and try to see who ends up being the most important for the run is another approach that works out well.

Truthfully, Son of a Witch is a delightful expedition that leads to a lot of replay value, tons of material to explore and unlock, and plenty of time spent seeing just how far the storyline goes and what could potentially happen when you drink eight potions back to back. It runs well on the Switch, lends itself to single or multiplayer without a hitch, and has the right price for the amount of content, perhaps even a bit underpriced. If you’re looking for a game with longevity, a bit of absurdity, and a more PG approach that everyone can enjoy, you’ve come to the right neck of the woods.

Son of a Witch Review

Rescue your mom from the king by any means necessary in this procedurally generated, fantasy style hack-n-slash that really appeals to anyone with a Switch.