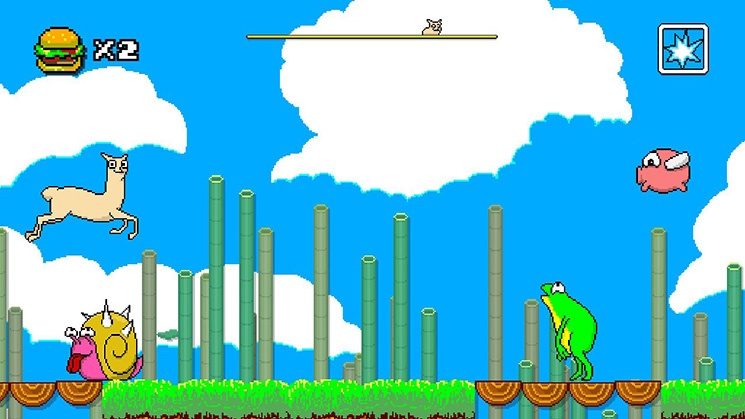 There was a point, somewhere in the last couple of decades, where the idea of parody, homage and referential humor all just kind of blurred into a single idea and we decided that was acceptable. Some directors and creators realized that a stylized parody (things like High Anxiety by Mel Brooks, or Germs by “Weird Al” Yankovic) had just as much merit as straight up parodies and were sometimes better crafted. However, I think the vein of the “title” Movies (Scary Movie, Epic Movie, Disaster Movie) overshot the idea and stopped making original jokes and just showed you something and said “GET IT? IT’S FROM THE THING!” To be fair, the first Scary Movie was genuinely well done, but I can’t say the same for the sequels. There are plenty of homages and satires in gaming as it is, so I thought, perhaps, Superola and the Lost Burgers would have a good combination of nods and gameplay. I was incredibly wrong.

Superola is the name of the llama who is our main character and protagonist, who is hell bent on getting back all the hamburgers. Why? Because the Hot Dog Aliens have invaded and taken all the hamburgers, like hot dogs are known to have done. Sunday is always hamburger day, and Superola isn’t about to just let that day slide on by. I wish there was more to it than what I just said, but that’s the whole damn plot of this multi level, multi-world autorunner.

The mechanics boil down to the following: Superola automatically moves along at a designated speed. If he hits anything (a bad guy, a spiked vine, falls down a hole), he dies and you start the level over. You have a couple of tools at your disposal. Firstly, you can jump, which is about as impressive as you’d think. Secondly, if you’ve collected any burgers, each burger gives you a single laser shot that sustains for a few seconds and blasts anything in its path. Some enemies need only a moment of laser exposure to die, and others need a sustained couple of seconds before bursting into dust. The burgers are limited each stage, in some cases having zero present, and you gotta really judge when you need those lasers, because saving your burgers converts them to coins, which can be used to buy powerups from a shop (once you find the shop). 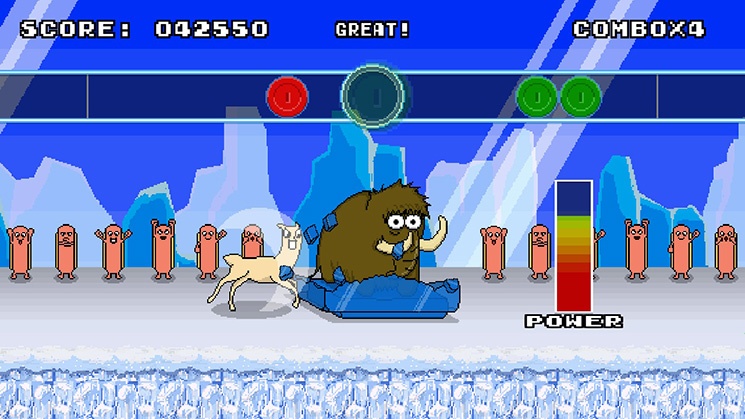 I wasn’t totally in love with the way the game handled, but at least Superola and the Lost Burgers brought me about as much as I was suspecting in terms of gameplay once I got an idea of the core idea. The jumping is very floaty and wonky, so you need to be extra careful when multiple enemies line up, unevenly, in your oncoming lane. There are cases where it seems nearly impossible to successfully jump, so burger usage becomes pivotal in order to even finish the level. Since each stage is relatively short, there are no checkpoints, but that also means you can get pretty damn far, hit something and then need to start from the beginning, which is damn frustrating. Additionally, the coins seem like something worth saving up, because you want to get the book for the hidden pathways that exist in order to streamline your experience. And the running and jumping is at least eventful: eventually, you have to battle the hot dogs, which comes down to a modified version of rock paper scissors. I wish I was making this up, but you waste your time running as a llama to get hamburgers, shoot lasers and dodge lightning bolts just so you can throw down with a hot dog in roshambo. This would be funny if it wasn’t so damn tedious to get this far.

The music and art style are a double fist to the face in Superola and the Lost Burgers. It feels very cheap and mean to crap on the way the game is designed, but there’s something about the atmosphere that makes it clear the janky, MS-Paint direction of the game was intentional and meant to be funny or in some way connective to the players. Instead, it just alienates me even further, making it feel like this was intentionally low effort. The character sprites are all kind of lopsided and have loose pixels, and feels like it was drawn by an elementary schooler with a modest grasp on how to use design tools but no inspiration. The music, in contrast, is very intentional in being pitchy, chippy and trying to copy that idea of 8-bit music in a very negative way, like focusing on everything people maybe hated about that generation. Remember when a game would start up and you’d have to mash on the volume down button because it was way too goddamn loud? That’s how every single track of Superola feels. 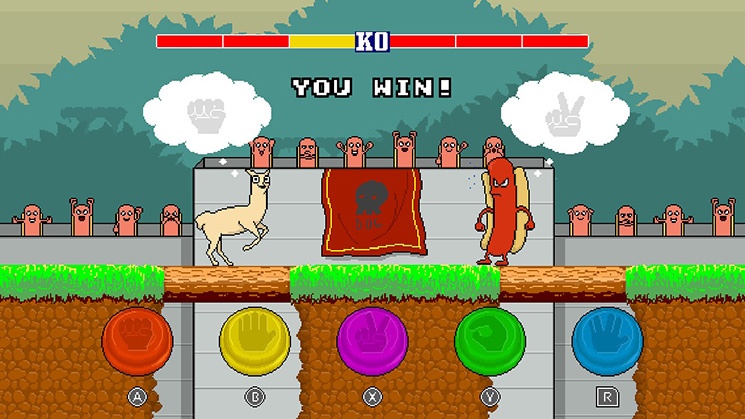 But the biggest offense of the game is all of the shoehorned, hit-over-the-head implementation of references and callbacks. Right from the get-go, when the Hot Dog Commander announces “All your hamburgers are belong to us,” I knew I was in for a rough time, and I was totally correct. The overworld map looks like it was heavily “inspired” by Super Mario World. When Superola finishes a level, he ends up in a laurel ring that’s like the crest at the end of Sonic the Hedgehog’s levels. A gopher tells me that it’s dangerous to go alone, take this. One of the powerups are the “Deal with it” shades from several generations of meme before. Rock paper scissor…Spock, lizard. Etcetera. Etcetera. Even the fact that our protagonist is a llama comes across as intentionally evoking either the Llama Llama song from the early 00’s or maybe the llamas that kept accidentally killing people in those Flash animations. What’s insane is that this kind of stuff is acceptable in limited, measured doses that are either subtle or singular, not when every single goddamn moment is awash in pop culture finger pointing. The llama shoots a laser with the old “Shoop Da Woop” face. Seriously? That exists in The Binding of Isaac, but that game also existed when that meme was relevant. This is just pandering to the lowest common denominator.

Overall, Superola and the Lost Burgers seems like a very clear “bait” game, meant for reviewers to stream it, laugh and lament over how cheesy it is, and then get other people to ironically buy it in the process. It feels harsh and mean to level such accusations, and I genuinely hope I’m wrong, but this wasn’t a great trip to the park, this was a trudge through a back alley. This is like going to a high school play and having the main character say “What, you thought maybe I would just…throw away my shot?” and then wiggle his eyebrows at the audience for eight minutes while other characters also made Hamilton references. At least there’s actually a game in here, something Meme Run couldn’t even say. But in all honesty, really consider what you’re doing with your money and time before you saddle up this llama.