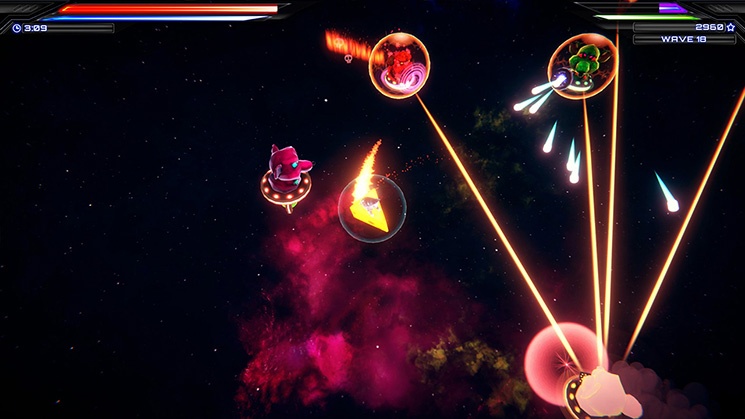 There are very few times where a game will give you something totally unexpected. Even when a game is a good surprise in terms of reveal, storytelling or generally interesting action, it’s hardly “unexpected,” because, well, you learn to look for these things. When Pony Island landed, I’ll admit that was unexpected. When I finally got the Delirium ending in The Binding of Isaac, that was totally what I thought would have happened. But I wasn’t super sure what would come of Spacecats with Lasers, because, well, I didn’t think a game would be quite that on the nose in terms of title and gameplay.

Spacecats with Lasers is about a cat, in space, who shoots lasers at evil space mice in order to save the universe and probably the cheese he’s riding on (which you can change to something else eventually). As you fight your way through hordes of angry mousey hordes, you will eventually make your way to the Pug King, who is working with the mice, I guess? I gotta be real honest, the story doesn’t totally make sense in a kingdom/phylum/species sort of way (who doesn’t do taxonomic research before making a video game?), but I suppose it doesn’t matter. It totally doesn’t matter. Cats also don’t shoot lasers, but why get into debates about whether or not Andy Samberg correctly predicted the future of cats? This is a game, enjoy cats shooting lasers.

From the word drop, Spacecats With Lasers is a decent little arena shooter, with plenty of space to move about and get ready for the ever-growing waves of mice that spawn around you. Spacecat must be careful: the mice rarely spawn somewhere convenient, and will appear off camera, behind him and way off in the corner, where they’ll start shooting at you immediately. You can move around your little spaceship to dodge and get a better vantage point, and you also have a limited dash mechanic to move to another spot quickly (though it really is quite limited). Spacecat can shoot lasers to take out the hordes, but you have a fixed number of shots, at first, and you gotta wait to reload once you’ve exhausted your laser clip. After a while, you may find some enemies drop wave-centric power ups, like temporarily making ammo unlimited, or increasing the amount of damage you do. Finish off the wave to blast off to the next, picking a permanent upgrade as you go (such as more ammunition, more health, more frequent power up drops, etc.). All of this culminates to making you the best Spacecat you can be to battle the Pug King. 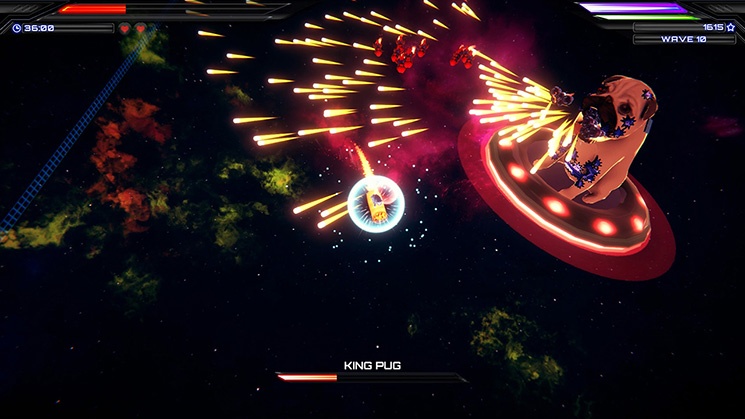 First and foremost, I abhor the audio. This is the second time in recent memory that the music/sound effects have struck a nerve with me so clearly, but the game was just so unbelievably loud from the very beginning, even with the audio balanced out (thanks, menu settings!) and turning down my television. The number of explosions throughout the wave play is quite high, and the introduction tune that’s a space-influenced synth beat with off tempo meows mixed in just set my teeth on edge. The main game’s music is repetitive and doesn’t offer anything in the way of audio cues as to which way the enemies are coming from or what you should be doing next: it’s just a cacophony of noise from start to finish. I did a second playthrough with the volume muted while I played some Waterflame instead, and it worked out incredibly well. It’s not a strike against the game, but, for me, sometimes the soundtrack can really rub me the wrong way.

As for the game itself, Spacecats with Lasers is fairly decent in terms of handling and playing. At first, it seemed like my ship was flying way too slowly to properly navigate around the arena, but enough time passed to show me it was just right. The space area isn’t that large, and you don’t need to warp jump to the other side of the screen for any occasion. There’s enough handling and creative drive to make you interested and engaged in keeping your cat moving and shooting, and the limited ammo clip prevents the game from becoming too easy and boring. See, if I could just shoot to my heart’s content, this game would be over in 15 minutes and I’d never pick it up again. By having unlimited ammo be a time-sensitive bonus and having every shot count otherwise, I have to really get more skillful and time things out, and it also gives incentive to choosing the right power ups. Protip: if you have the chance to expand your ammunition, do it. It really lends a lot more success to subsequent runs to not have to reload as often.

And the mice themselves are a strong variety of enemy ships. By now, anyone who’s played Geometry Wars or any number of similar titles knows what ships you’ll encounter: the grunts that occasionally shoot, the sharpshooters with speed, the kamikaze warheads, the jerks who have shields and any number and combination therein. I ran into a particular mouse early on who was invincible as long as his assistant mouse was keeping his shield fully powered. This was a good bit of creativity, and you see that in the enemy character designs as well. It’s not just different colored mice, though I can definitely see a few places where palette swaps and size variants were used to make some enemies “different enough.” A fair amount of creativity went into the design of the game, and I appreciate that. 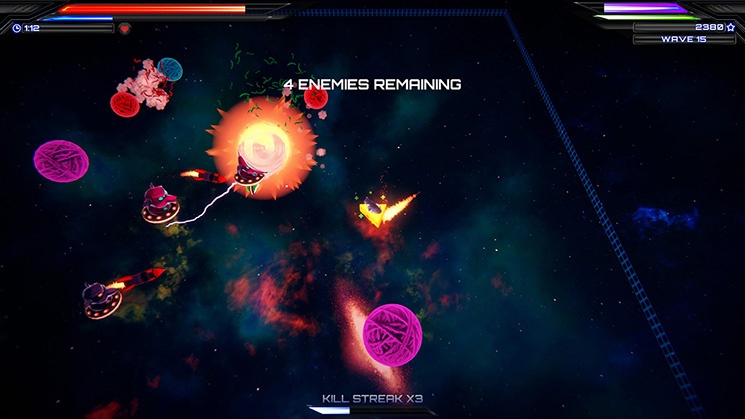 Spacecats with Lasers also delivers well on the big boss himself, as Pug King needs a good deal of time and careful dealings in order to beat him. Far from being an unstoppable dog or just a slightly larger mouse, Pug King uses satellite ships and some crazy sweeping lasers to make things interesting and scary, and it’s enough that even seasoned shooter veterans will need a couple of tries before they can conquer space and make things safe for everyone. I’d say that’s the biggest surprise of Spacecats with Lasers: despite the obvious meme potential, the game is really competent and well put together.

Lastly, if you are here just for the memeing, you’ll need to beat the game a lot to unlock all of the different style changes you can put on your Spacecat. From simple fur color changes to brand new hats and ships, the unlocks are all five coins a piece, and all from currency that only comes from successful game runs, so don’t bother worrying if your wallet is going to fall victim to aesthetic DLC: Bitten Toast Games wants you to work for your cheezburger, not simply buy it.

All in all, Spacecats with Lasers is a really solid title for the concept and price. It’s got a lot to love in terms of a good (if sluggish) space shooter, and it’s original and humorous enough to keep your attention. I can’t say that the average player will want to grind all the unlocks, but who knows? Spacecats with Lasers exists as a VR title, and I wouldn’t be opposed to the Switch deciding to include a VR helm at some point in the future. If that ever becomes the case, you know the first thing Nintendo fans will want to do: shoot stuff with lasers. And Spacecats will be there. Even if it doesn’t, c’mon, it’s a good game.