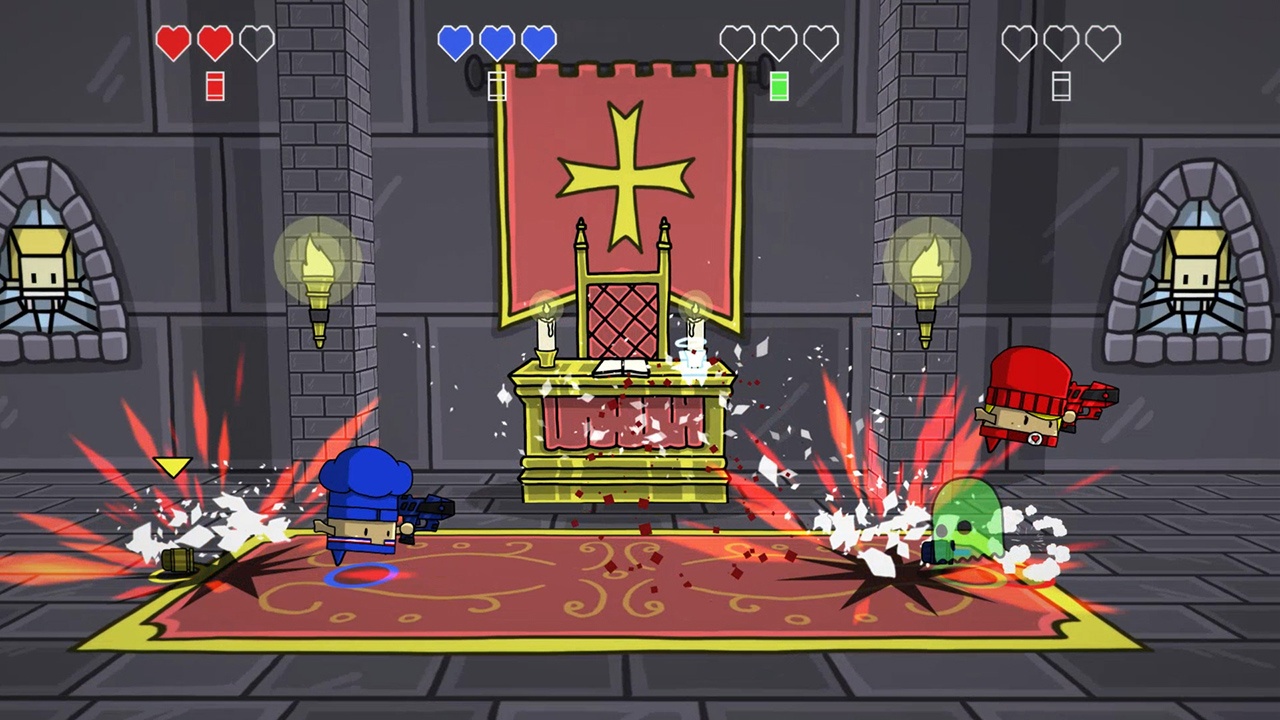 GUILT BATTLE ARENA, released on the Nintendo E-Shop 28/02/2018, developed by Invincible Cat and published by ForwardXP. This indie multiplayer action shooter will put you out of 157 MB of data and £8.39, which is worth it for the hours of multiplayer fun you can squeeze out of it.

The plot of the game is really basic, to such an extent that it might as well be non existent. The Guilt Patrol are sent to Planet Arena IV to stop the evil Judge who has taken over the planet. The team consists of: Lucil an average guy, Ken a superhero in panties, Sam a colourful spy and Paul and humble pastry cook. However don’t expect too much characterisation from these guys, as in the levels you can choose from any of the unlockable skins and these characters only turn up in the end cut-scene of the game, presenting you with a less than satisfying conclusion. You reach this conclusion through getting at least one out of three stars on the seven levels (including the tutorial) which usually involves defeating 25 to 30 enemies. You also unlock other characters through playing these levels, randomly gaining them with 47 for you to unlock. 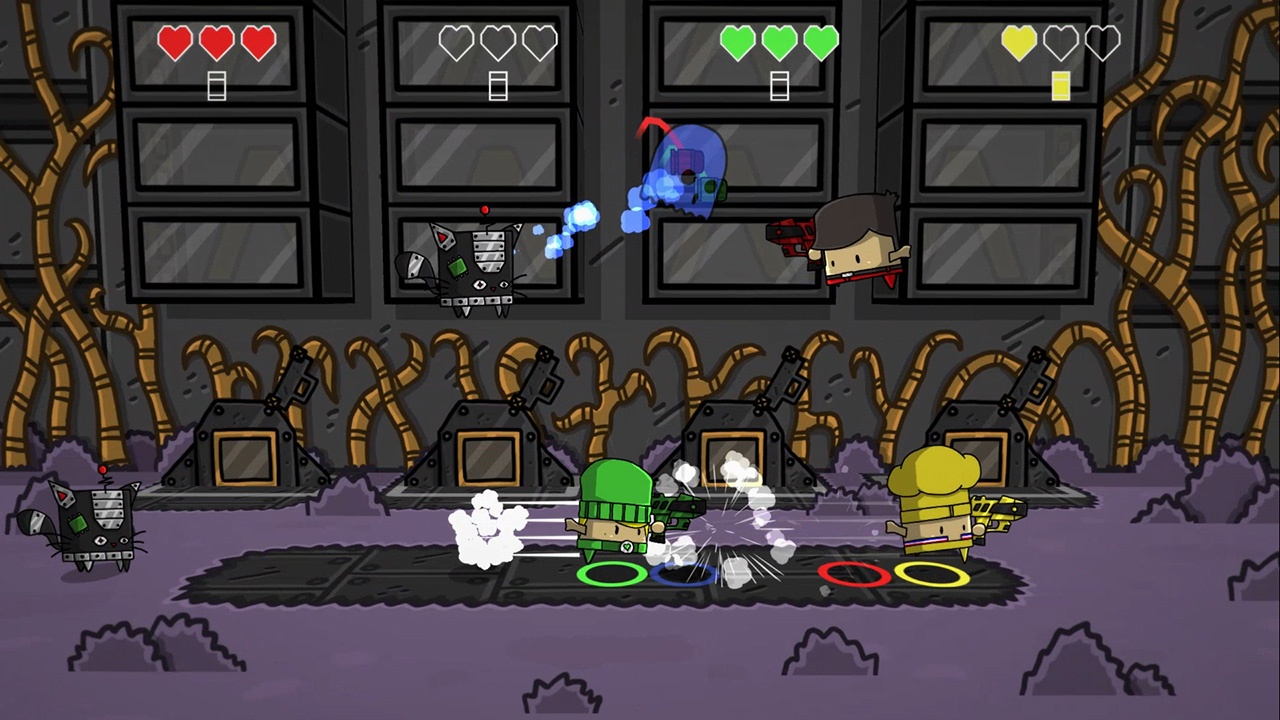 The presentation of the game is good. Each level has a different theme which ranges from exploding cat bombs to holy falling chickens of death. These level designs seem childish and sometimes a little cliché, but how can I not love chickens that fall from the sky and explode?  The final playable level is a culmination of all the gimmicks from the previous levels which actually provides a harder challenge than those presented before hand. I love the art style of the game, with the 2D characters and backgrounds, reminding me a bit of Super Paper Mario. The characters are cute in design (even though they do lack personality) and it gives me a challenging choice of who to pick each time I begin a level. The music is good, giving me something catchy to listen too as I dodge the waves of enemies.

The gameplay is where this game really shines. In each game mode, there are certain rules in place, these being that you are always moving, and that you only have one bullet that you then have to pick up again after shooing. This allows for fun and fast paced gameplay, also with the need to be tactical. You also have a variety of moves to use to avoid the enemies charging at you, a double jump, a dash and a dive, all of which prove very useful when you’re trying to reach your bullet. The enemies have various weapons, such as swords, axes and guns that you have to avoid, which can be harder than it seems. This gives the game replayability as there’s nothing more addictive than wanting to beat your high score. 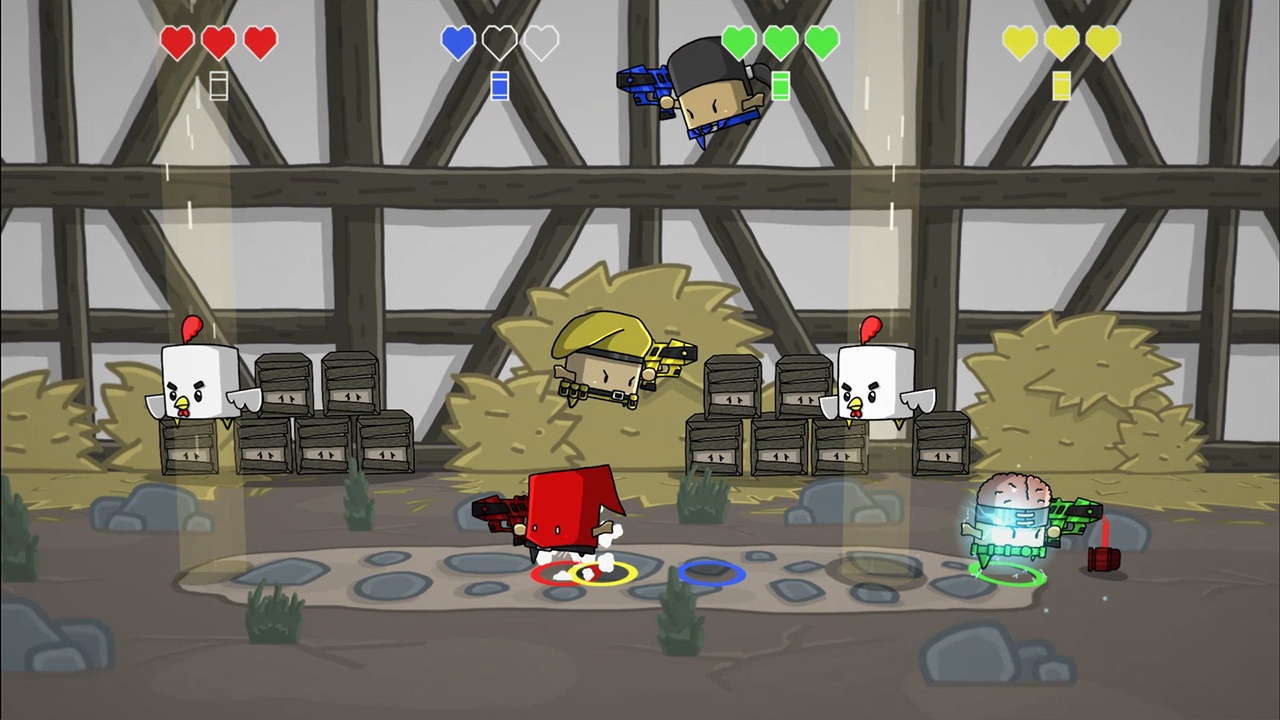 The multiplayer is amazing in this game, with the ability to play with four people, allowing for hours of play time. There are various different game types, such as last man standing in which you shoot each other until one of you have lost all your lives, or hot potato bomb where your bullet is counting down to 0 and whoever is holding the bullet when it explodes looses. There is also a bunch of modifiers you can use to make it even more fun, such as defeated players coming back as ghosts to steal bullets, or players being invisiblee.

In conclusion, Guilt Battle Arena’s multiplayer mode is excellent, with variety and entertaining game types, as well as having a cool and cartoony art style. However Guilt Battle Arena could do with a bit of a stronger plot, or just get rid of the plot entirely as the state it’s in at the moment just isn’t satisfying.