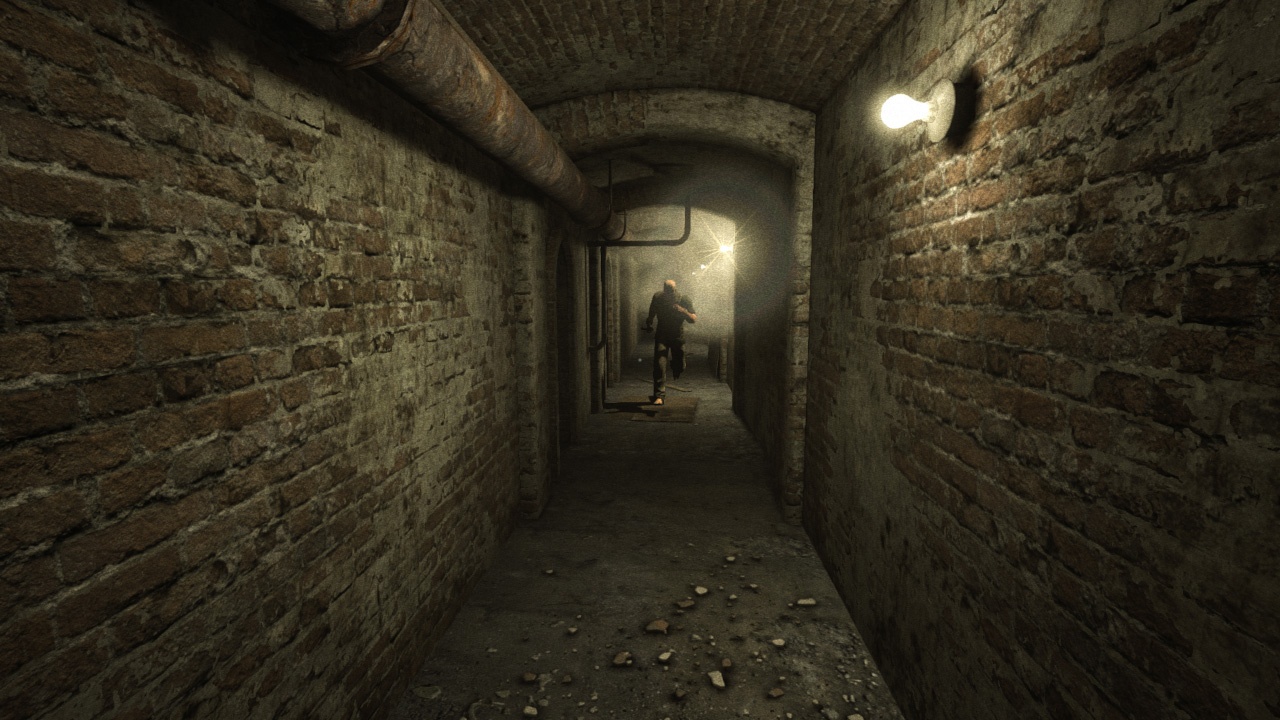 I think I have a psychological disconnect from how much I theoretically enjoy horror games and how much I actually enjoy them. There’s this allure of a scary story and really good, compelling storytelling that makes horror seem enjoyable, but then I sit down and play one and can’t go to the bathroom by myself for the next week. Layers of Fear, as amazing as the plot was to uncover, really did my head in with all of the graphical portrayal of madness and now I won’t pick up crayons until after the summer comes. And, thanks to my time with Outlast: Bundle of Terror, I guess sleep is out of the picture for the next month or so.

Outlast is a phenomenal survival horror game that puts you in the shoes of Miles Upshur, a journalist who has gotten an anonymous tip that some really messed up, illegal and immoral stuff may be going down over at the Mount Massive Asylum, which, has there ever been a great, fantastic asylum? Seriously, between every horror story ever and the very implication, asylums are synonymous with “bad stuff town.” Mount Massive Asylum, in particular, was closed in the early 90s for being “every asylum stereotype ever” and then re-opened in the late 2000s by the Murkoff Corporation, because that’s not telling in the slightest. A faceless, nameless organization buys an insane asylum? That’s just gotta be for converting into a puppy shelter. Anyways, Miles decides that he needs to expose whatever is going on in there, and also decides that breaking and entering, in a remote location, with no cellphone service or gun, is the way to do it. I feel like saying Miles is going to have a bad time is an understatement, but whatever, you knew this was a horror game, so strap in.

The Whistleblower, a standalone DLC that acts as a prequel to the original Outlast, is also included in the Bundle of Terror, and it definitely should be played after the main storyline concludes.  Although it sets the stage for what makes the anonymous tipster send the email to Miles that begins the entire main storyline, it also contains massive spoilers in terms of what happens during the course of the main game. If you become half as entranced in things as I was, you’ll want to give The Whistleblower a full playthrough: it’s only about half the length of the main Outlast, wraps things up nicely and contains some of the most squeamish, awful scenes I’ve witnessed in a game. If that doesn’t sell it to you, then I honestly don’t know why you picked up the game in the first place. 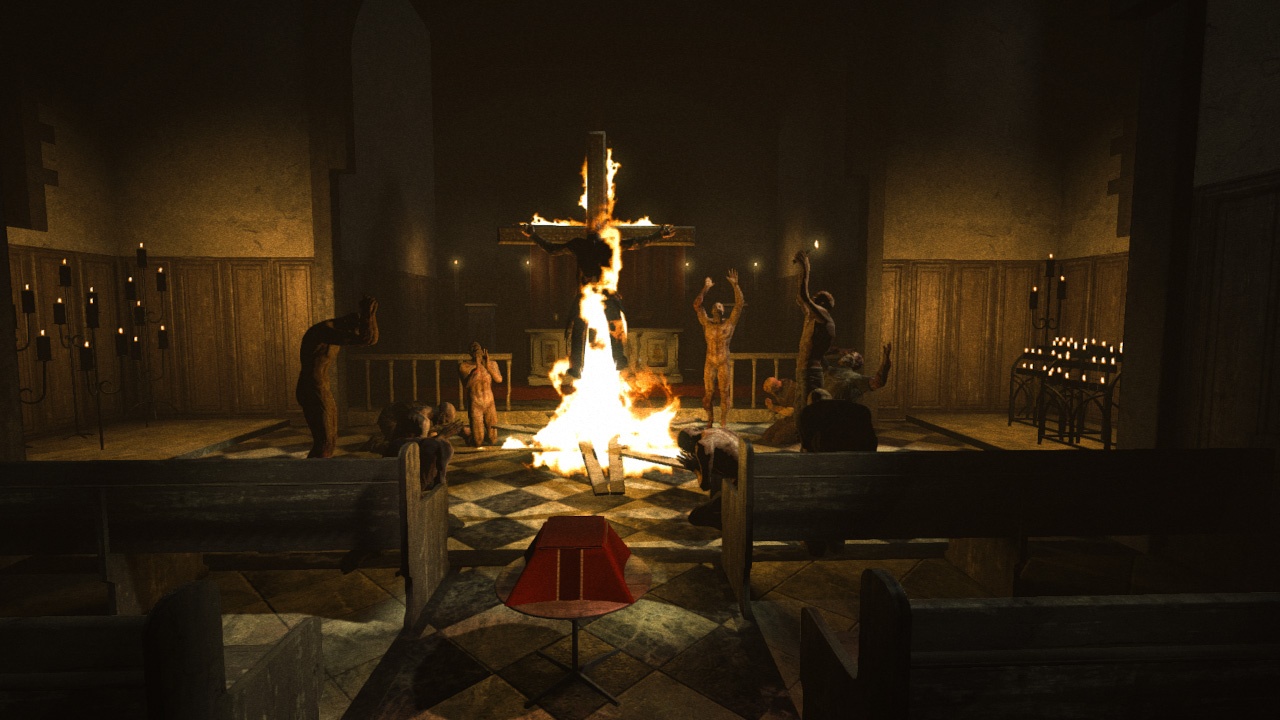 Set in the first person perspective, Outlast: Bundle of Terror really emphasizes the survival aspect of the game, because damned if you aren’t going to die a lot in this game. You will never find a weapon, so shake that thought out of your head right away. Miles has three primary moves: run, jump and crouch. Most of the game will be spent running and hiding, so, if you’re a fan of games where you get to bust a cap in a zombie, you gotta go park your car elsewhere, because Miles doesn’t know a damn thing about defending himself. There are a couple of instances where Miles, through exposition, is forced to fight off a couple of things, and you have no control over this, so it’s basically a crapshoot if this particular attack is a story-driven moment where you’ll survive, or an unlucky jump scare that’s going to brutalize you into a restart from your last save. You can save at any time, but that doesn’t mean you’re always safe.

Miles does have one thing on his personage: a camcorder with night vision. The camcorder becomes your essential, vital tool in getting out of this game in any sort of shape that isn’t “decomposing,” and it makes sure you know this. Unlike other games that have unlimited flashlights, the camcorder has a constantly depleting battery, and it goes faster when you turn on night vision. Batteries are strewn about the world of Outlast, and you’ll have the opportunity to change them when juice runs low. But batteries are, ultimately, a limited commodity, and you very well may run out when you need it the most. Not that it helps you in any good way. Having the camcorder up unlocks new notes when you record something particularly messed up, giving a further note into his journalistic expose, and the night vision gives you a nice, green-hued outline of everything you can’t see in the dark. However, that also means needing to view the game through a camcorder night vision filter, which instantly makes shit 200% more terrifying when it starts running at you.

The fact that you have a specific button combination to look behind you while you’re running should tell you how much “oh shit no” content is in this game. Outlast lets you know immediately that this game isn’t meant to be fun or enjoyable: you’re in a goddamn condemned asylum that’s now being used for “illegal purposes” and you’ve decided to go, by yourself, at night, with no weapon, to check it out. Nearly every room that you stumble into is a horror show unto itself. Outlast gives you a full disclaimer about what you will see in terms of rated R content right at the top. There’s blood, so much blood. There are bodies and dismembered limbs. There’s plenty of sacrilegious content (because of course an insane priest at some point). There’s sexual content, but not even sexy sexual content, just stuff that further drives home the absolute freak show that is this game. The sounds help paint the atmosphere as something truly horrifying, from cheap string tricks when you open the wrong door to the heavy breathing as Miles feels like he can’t run any further but you really need him to run just a bit more. You spend so much time crouched under desks, inside lockers and (hopefully) invisible behind pillars just waiting to see if the game is going to go easy on you or if you’re utterly and truly screwed. 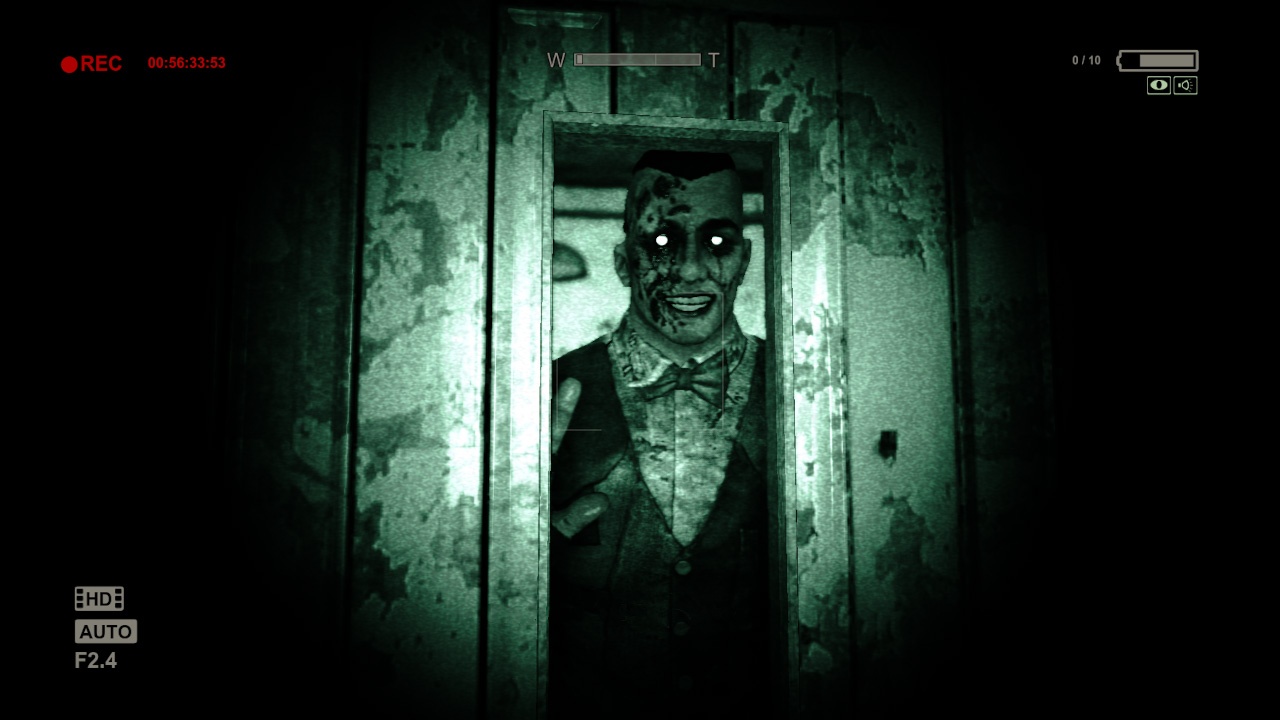 Players will find themselves a bit touchy with the Joycon controls on this Switch port, but only because there’s the option to open doors slowly in order to give yourself a bit of leeway from potential death and, well, let’s say Miles doesn’t always understand what an attractor slamming doors can be. Looking around should be fine tuned in the settings to give yourself the right amount of sensitivity for how you like to play, and I recommend amping the gamma just a bit so that the game is scary but not unfair. Even with careful preparation, it still might be better to use a full controller (so Joycons with the holster or maybe a Pro Controller) just so you don’t instinctively try and fling the Joycon to simulate movement. I got horrifically spoiled by that with Layers of Fear, and I’m hoping the devs at Red Barrel consider motion controls when they bring Outlast 2 to the Switch later this year.

Outlast is only trying to do one thing: scare the hell out of players. And it does it with extreme bravado and success. From start to finish, Outlast is a stressful, terrifying and harrowing experience, full of visuals and sound panels that would disturb anyone and anything in such a situation. If you’ve never played a horror game before, do not start here: not only will it traumatize you, it probably will ruin the chance to enjoy other games where you have a lower horror factor or, worse, the ability to fight back. If you’re a long-term horror game and you’ve never played Outlast, this could be the perfect place to pick it up and run. There’s no running issues, I encountered zero crashes, the scream-inducing Whistleblower DLC is built-in, and being able to play this under the covers at night seems like the best way to scare yourself cross-eyed. Just be sure not to throw your Switch in the process.