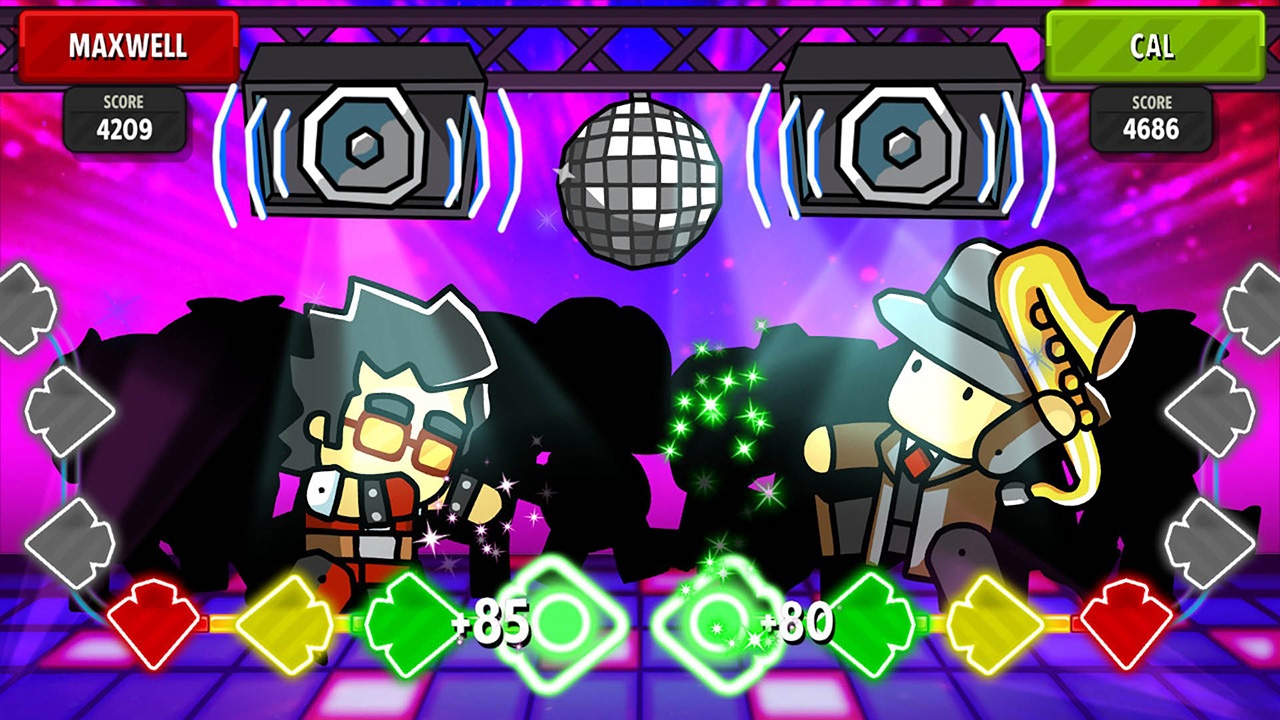 Scribblenauts has always been the little game that promises what it simply cannot deliver, and I’ve never held it against the developers, 5th Cell. The game has always, since it’s DS inception days, been a fabled game where literally any word can be dropped in and turned into something marvelous to help solve puzzles. Of course, there have been limitations: no swear words and most major entities are removed (so God is ok because he’s public domain, but no Tom Cruise). The problem is, the minds of everyone tend to be a bit different, so, while the creators think that it’s fine for the sprites of an alpaca and a llama to look the same, it really grates on alpaca enthusiasts. The inclusion of adjectives for the remixed release and multiple words for Unlimited gave the game some real spark, and, thanks to the DC hookup, being able to scribble next to Batman was serious joy. Even still, there was something missing in all of them, something that just made the games fall slightly short of their goal.

So I approached the newest iteration, Scribblenauts Showdown, with some hesitation, as the target for this game was not word enthusiasts, but party game people. Right away, this felt like something was about to go drastically wrong: I don’t have a touch screen input to write my words, the pool of vocabulary is truncated in favor of different ideas (different multiplayer matches) and Batman was nowhere to be seen. And, if that’s all you focus on – what’s not in the game based on previous titles – then you’re going to have a bad time. Straight up, this isn’t Scribblenauts as you know it: the puzzle solving, highly technical platforming is nowhere to be seen, and that is seriously ok. You need to approach this like you would with Mario sports titles. The name is on the door, but this isn’t the normal game that you’re used to, it’s a spinoff. And, once you adjust to that idea, you find that there’s a ton of fun to be found.

Scribblenauts Showdown is meant to be a multiplayer affair, ideally two but you can have up to four in some modes and as few as one plus a CPU player. 5th Cell has developed a number of mini games, like Mario Party, to move you along in the two main modes, versus and Showdown. Versus is the perfect place to get your feet wet, either alone or with another person, and see how the game plays itself out. The mini games are divided into two categories, Wordy or Speedy, and you can play as few as five matches or as many as thirteen. You can also mix the minigame types for maximum mayhem, or have it be free play so you can decide on the events you like best. I would recommend mixing, at least at first, so you can really see the full spectrum of things. 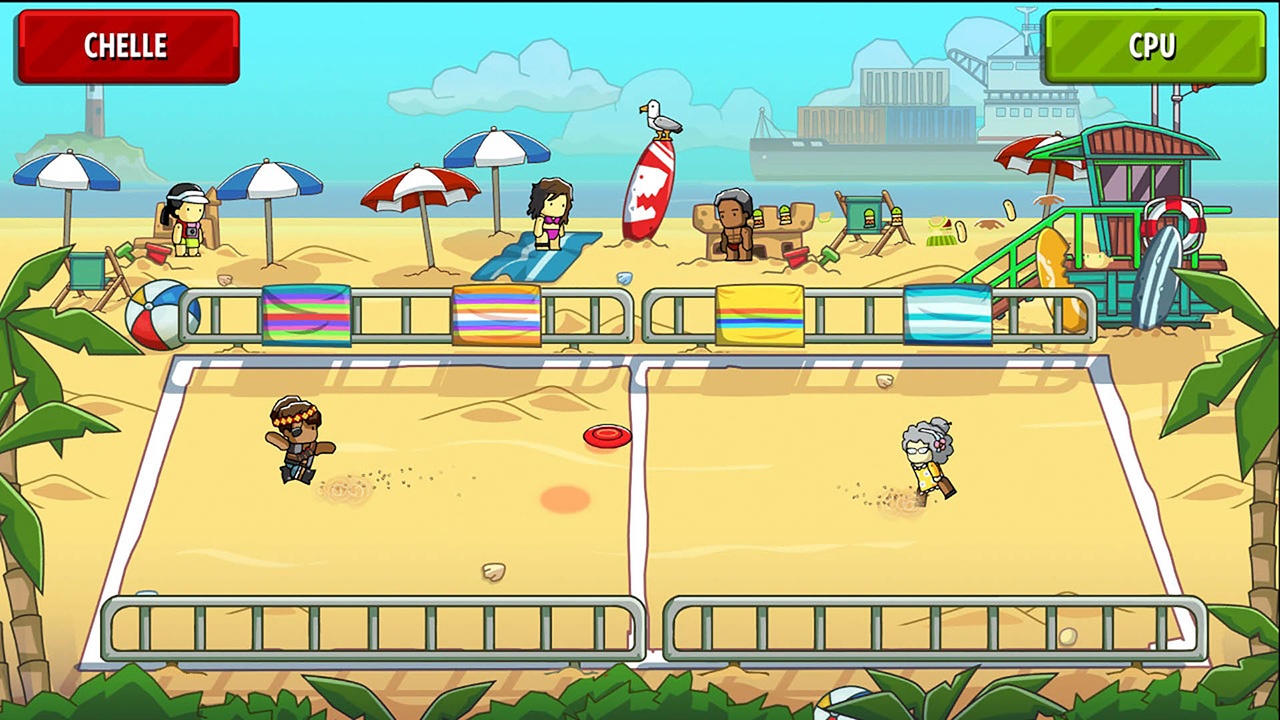 The Speedy are more akin to the Mario Party type, asking players to execute mundane but funny actions in a limited amount of time, such as chopping down a tree or pumping up a balloon with a bicycle pump. These are the games that’ll keep players engaged even if they don’t feel like inputting words through the bizarre word wheel approach, because there’s no requirement for vocabulary savvy here, just fast actions and good reflexes. The Speedy games adhere most to the party atmosphere and will go over well with any crowd who aren’t fixated on the Scribblenauts title. The Wordy games, on the other hand, are longer games with more specific goals: keep your magic carpet balanced, or ride a vehicle across a weird and wacky course that looks oddly like the old Excitebike maps. You’ll get a letter or category prompt before each game, allowing you to generate something that works into the games themselves. For example, in the racing game, you’ll get a letter prompt to decide what you might ride, but anything is possible: you’ll just get a speed advantage for not being an imbecile. So if the letter is L, you can totally ride a lemon if you want to, but picking a lion, leprechaun or lemur will have significantly better speeds since they’re, you know, ambulatory.

The word games are also where the charm of Scribblenauts as we know it still shines through, because this makes up for the lack of wide variety in the mini games themselves. Even though you’ll find yourself repeating stuff pretty quickly, having the letter and category variants means replay is fantastic. During an eating game, the category was egg based foods. I thought crème Brule would go down smooth, but my wife wisely chose an omelet and was able to smash through the course in record time while I vomited all over myself (in the game). Then again, when it came to delivering objects in an Amazon Drone inspired event, turns out delivering mansions pays better than delivering mice. And these turn up again and again in different ways, so it really gets you thinking on your feet about what works best for different ideas. It’s damn fun.

The Showdown mode is a card based board game where you’ll find a lot of time being dumped once you get the hang of Scribblenauts Showdown. While some cards will have instant events (draw two cards, move forward three spaces), most will require you to win at least one mini game to get the prize listed on the card, and this becomes utter and fantastic mayhem in multiplayer mode. If you also have small children who can play games but aren’t the best spellers yet, the game will automatically choose something for them in they’re slow to input words, so you can still have a grand time as long as they can work primary controls. Showdown can also turn into a 45 minute long affair if you do a “long” game, so choose wisely based on available time before jumping into certain modes. This is also the chance to engage in some cutthroat action with cards to steal hands, move players around and generally screw with everyone else, so make sure you know your friends before jumping into this one. We all have mental and physical scars from the N64 Mario Party days, and no sense reopening old wounds. 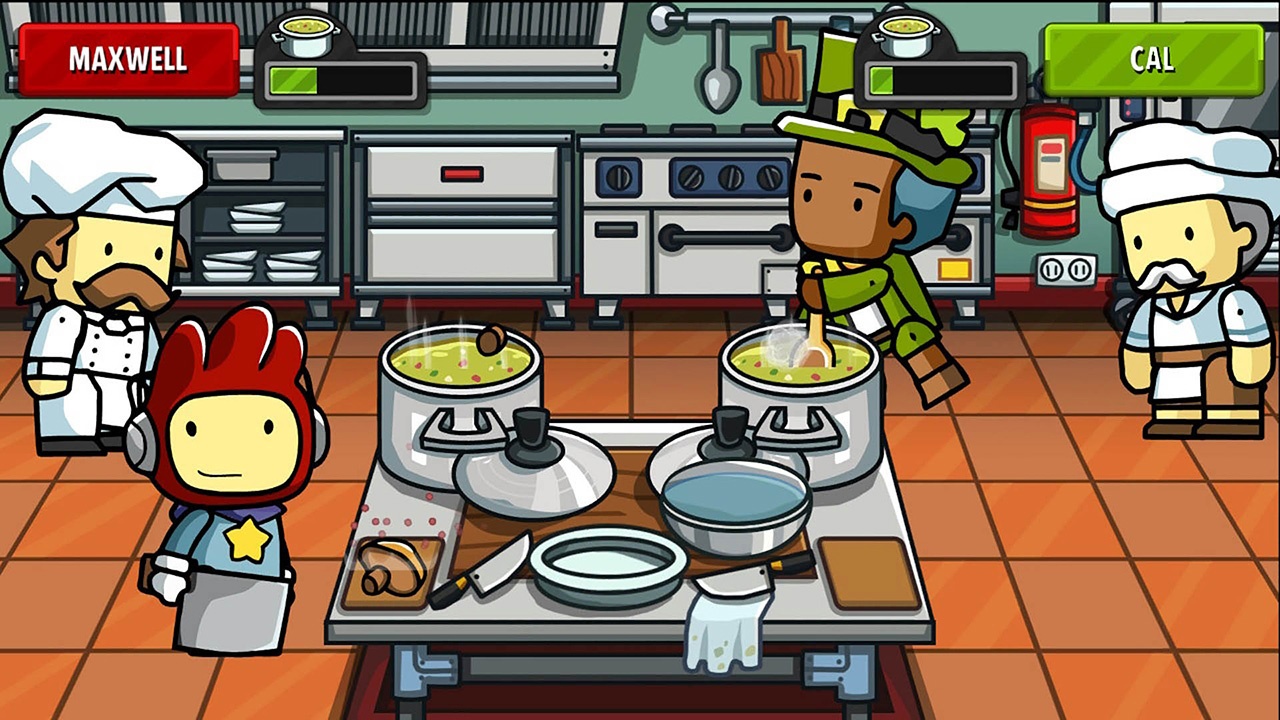 There’s also a sandbox mode, but I actually found the sandbox of Scribblenauts Showdown to be terribly disappointing. Instead of a wide open field, you have to be slotted into a sandbox of a certain setting, like a Mayan Temple or an old timey train. As cool as this is, it now creates a bunch of NPCS and obstacles that maybe you don’t want to interact with when you’re just having fun, and the NPCS also don’t care if you’re trying to input a word or not. In the Mayan temple, aggressive snakes and spiders kept biting me when I was trying to spell hammer (to take out said snakes and spiders) and I continually died before I could finish making my word. This really turned me off and put me out of the Scribblenauts mindset, so, why even have it in there?

Lastly, you do have a chance to design your own Scribblenauts character to use in the game modes, which I guess is nice. It’s nothing particularly bold or innovative, but it’s a good addition for younger players who don’t identify with Maxwell or any of the 50+ characters you can unlock throughout gameplay. All of your characters will still just look like they belong in the Scribblenauts universe, so don’t expect to create a one to one of Mario and then try to pass it off in the other realms. You can grow a moustache, but it’s certainly not as luxurious.

The sandbox mode of Scribblenauts Showdown really sends home the message for who this game is directed towards. If you deeply and truly love Scribblenauts and want to recapture some of the enjoyment that you’ve had in previous versions, you probably aren’t going to find that level of satisfaction here. There’s no puzzles or problem solving, no real single player mode, and the word bank has been hamstrung to keep things simple and light. On the other hand, if you’re looking for a party game that maintains a fun atmosphere but introduces some potentially memorable moments of hilarity, this is probably a better choice than most. I really had a blast doing the party modes, and only felt let down by sandbox. I still look forward to the day that we get a true sequel on our hands, but, in the meantime, this is a genuinely good time and can be enjoyed by most everyone. Don’t hate it for what it isn’t: like it for what it is.