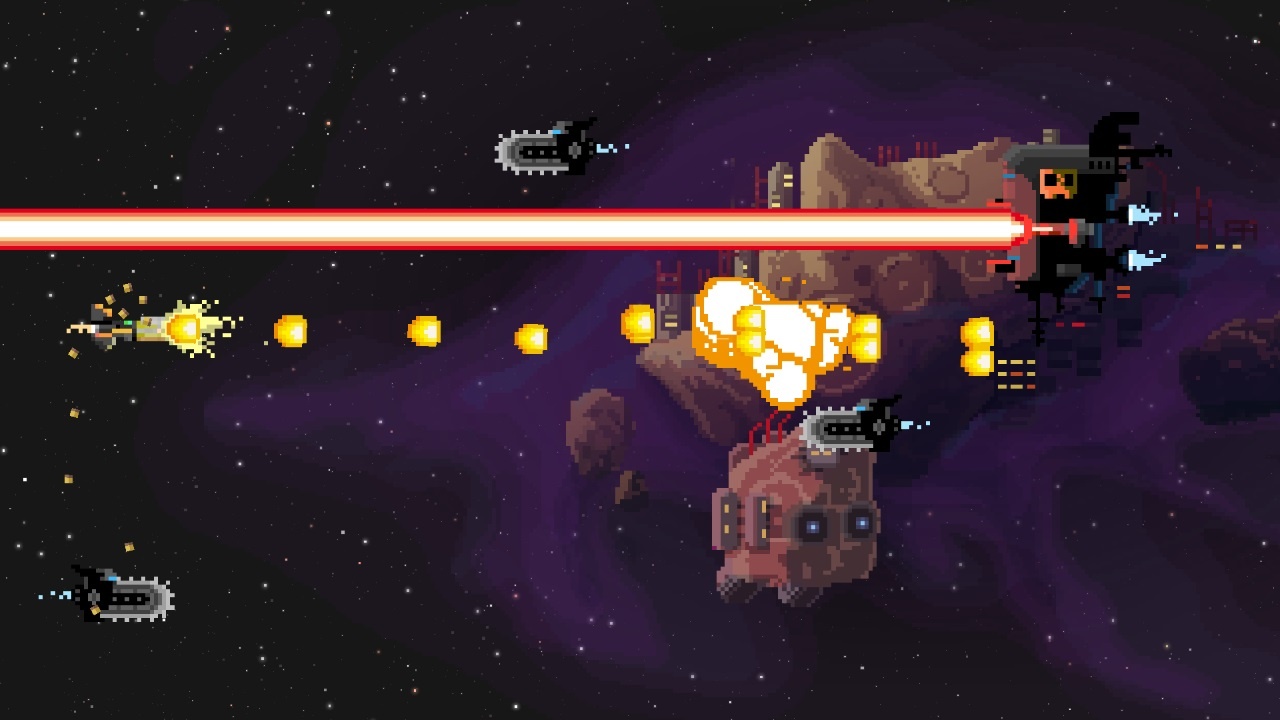 Steredenn is a horizontal shooter that I very fondly remember finding on Steam some years back. Besides scratching that important itch of good pixel art and a pretty solid soundtrack, the game brought some real innovation into the shmup genre. For one, it was procedurally generated, which is almost unheard of in games that involve a hailstorm of bullets. Part of the appeal of those types of games is memorizing the waves of what’s coming and then getting your timing down pat. Steredenn totally spit in the faces of the “math” players by randomizing almost everything that was coming your way. Additionally, it was made by an unheard of studio, Pixelnest, so I always love when the little guys deliver big. Well, now the game has made its way onto the Nintendo Switch with a lot of extra beef on the plate. Let’s delve into Steredenn: Binary Stars.

The plotline hasn’t changed in this updated and improved Nintendo port, but the plot was never really that important to begin with. You’re a ship in a fleet of soldier spacecrafts, and your homebase has just been blown to bits by space pirates. It’s not totally clear if you then embark on a solo mission to get vengeance, or if the other members of your platoon are also out there, but you only really care about yourself. However, thanks to the Binary Stars edition, you now know that at least one other ship survived the onslaught, because you can engage in co-op shooting to get to the heart of the enemy. In any case, you have to get through several stages of enemies, debris and danger, each stage ending with a randomly selected boss fight, before finally…actually, I don’t know if there is an end boss to Steredenn. That’s the only issue with the procedural generation: after several hours of playing and multiple unlocks, I never got to see if there was a finale. That is because the roguelike nature of Steredenn makes it so goddamn hard.

First and foremost, I must admit the controls are tight. Like, airtight. You need to be able to dodge, weave and basically make split second decisions about where to go and how you’re going to survive with almost no preamble. There’s a boss variant that crops up a bunch who’s big attack is scattering the screen with explosive mines and leaves just enough of a gap for him to fire a massive, world-ending laser. You gotta figure out where to go in less than a second, and he’ll do this three times in a row before changing to another attack. There are giant laser curtains that move in from all sides, fiery comets that come screaming in, and occasionally asteroids that have been laden with explosives, and you’ll only get a second’s notice, if any, where they’ll be coming from. If the controls weren’t good enough to navigate the chaos, this game would be borderline unplayable. But a lot of work went into making sure the response of the Joycons was optimal, and players from the PC version can breathe easy that this won’t have latency issues. Additionally, the incorporation of the HD rumble is beautiful: it’s like an echoing cry every time you get hit, and it felt almost special. 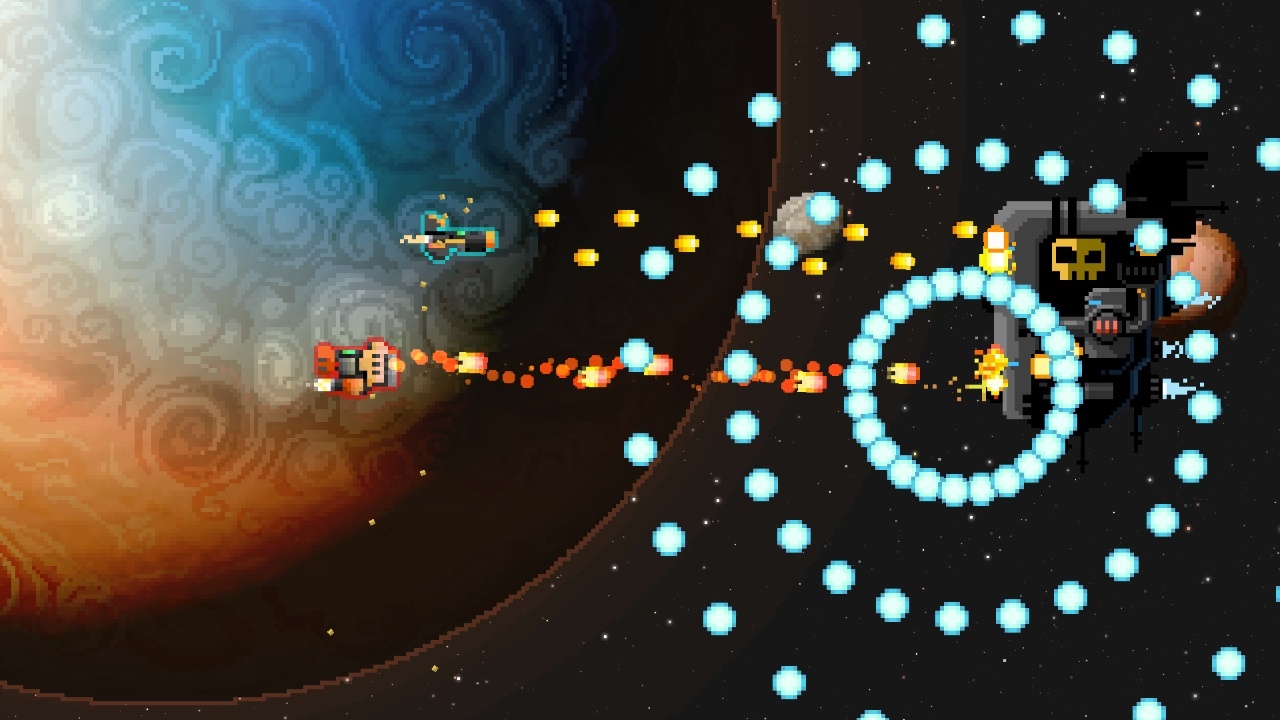 The weaponry of Steredenn is also something to behold, and that’s because of the wide range of usefulness that seems to suit most players style. Though longtime veterans will automatically pray for the Supergun or maybe Flamethrower, there’s a bit that could match anyone’s course of actions. Really wanna get up close and personal? The Shockwave does massive damage, and, when coupled with the Sword melee weapon and the Shield for blockage, you can become a ferocious knight of space. More intent on dodging and staying alive than damaging the enemies? Hopefully you’ll pick you a couple of “fire and forget” drones to do the dirty work for you (shout out to Laser Bots for helping me unlock some ships). There’s also a Shotgun, but you’d be crazy to think that would be effective in space: too close of proximity, not enough damage, but the name alone will be enough to coax the long time survival horror fans into thinking they’ve found the key to salvation. Fools.

The powerups at the end of each stage are also incredibly diverse, and I deeply appreciate the level of variety that you have. Choosing from five randomly selected enhancements, some are incredibly superficial, like doubling your score or making enemies explode on destruction (the chain enemies are the least of your problems) to ones that are universally helpful, like an extra drone that can’t be destroyed and shoots its own gun. And then some are so crazy specific they can either be ridiculously helpful or completely wasteful. Once I got an opportunity to get a Bots Perfected upgrade, which made my Bots shoot 15% faster with 50% more damage. Freaking awesome…if I had a bots weapon on my personage. Which I did not. And did not find that entire run, meaning my gamble of taking it was the worst mistake I could have chosen. In some alternate timeline, that powerup brought me all the way to the end of the game, not just to the Carrier boss which promptly exploded me.

Co-op mode is a fantastic addition to Steredenn because it really helps make the game feel more fair and balanced when the randomized elements are against you. Players will quickly realize that having a second person around to pick up the weapon that’s pretty good but not as good as yours means double the firepower and madness to kick back to the enemies. It’s a game changer in a good way, and I actually really felt the pressure to do well ease off with another person who’s even mildly competent at flying and firing with me. If you felt that the original was too harsh, this is a great gateway to something more enjoyable but still challenging. 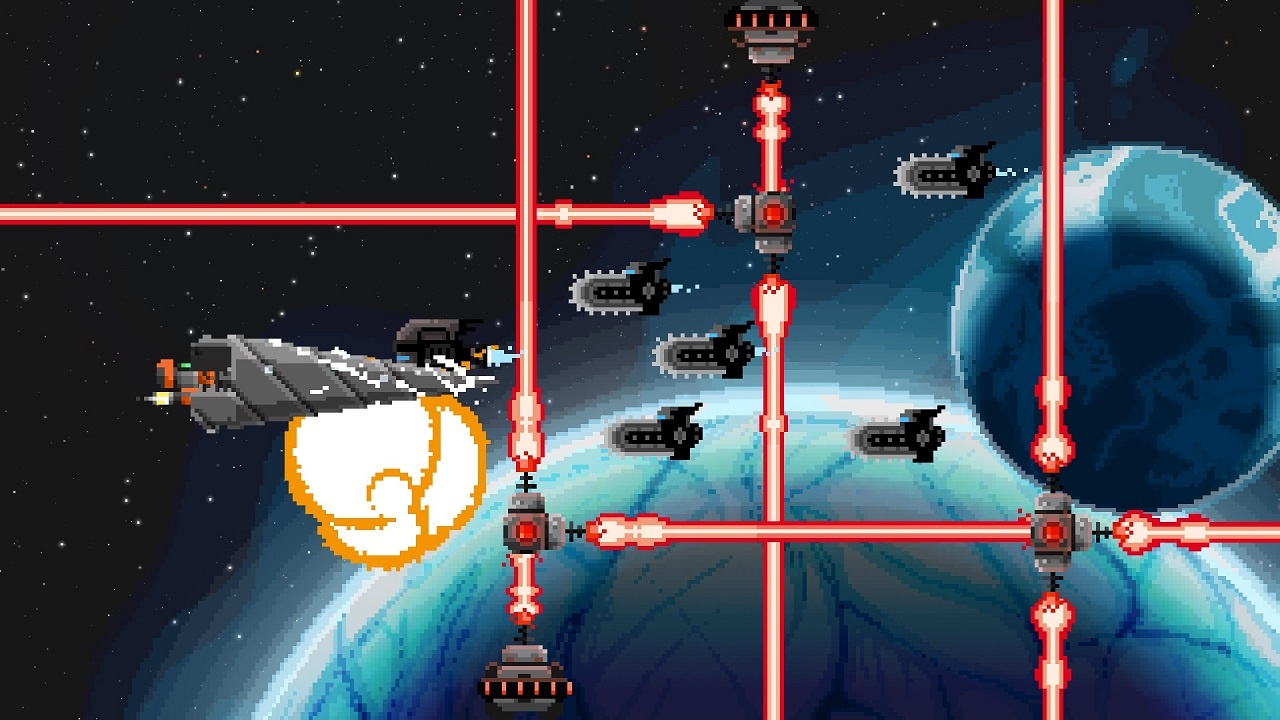 The daily challenge feels almost typical of roguelike games nowadays, but I’m not criticizing it at all. Much like the Arena Mode and Boss Rush, these are new elements and layers to Steredenn for fans to peel back once they manage to get a bit further in the game. Hell, you get the Daily Challenge just from playing ten games. Depending on how good or bad you are, that can be over in a second. Steredenn may be crazy difficult, but it’s fun and really wants you to play, so it only locks away modes until you’re actually ready for them, not just until you beat the game.

And that’s what I really liked about Steredenn (and still do, I’m still playing). This is a roguelike game that caters to the shooter audience and manages to appease both sides. On the one hand, you need good bullet weaving and an understanding of how to stay alive and where your hitbox is. On the other, you need to give up trying to predict what will happen next and plan your run on the perfect weapon drops or whatever. The only thing that I sincerely hope we see in the future is seeding, so that, if I get an amazing run with the best weapons, I can share the experience with other players, because we all need an underhanded pitch once in a while. But, regardless, Steredenn: Binary Stars is a wholly worthwhile game, and I’m super grateful to Pixelnest for bringing their baby to the Nintendo Switch. Definitely a must grab for shooter fans.