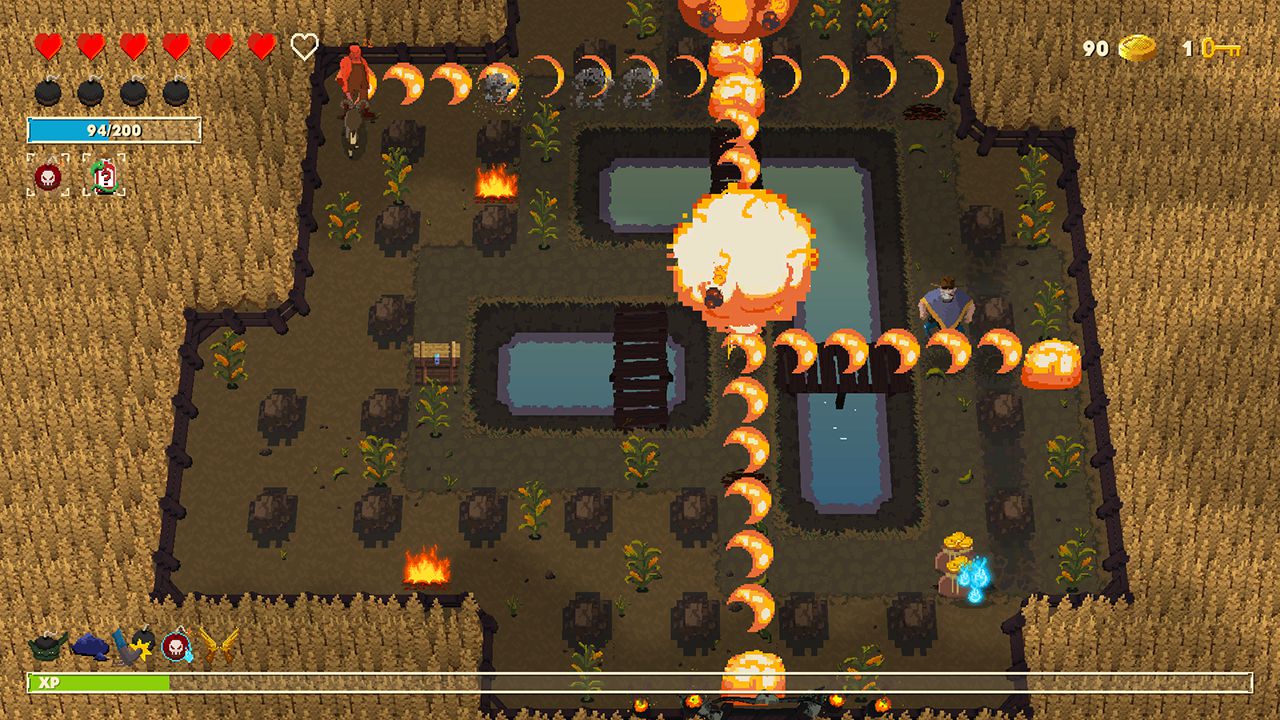 Yeehaw! It’s time to get off your horse and drink your milk, as we venture into the wacky and wild, wild west of Bombslinger, a new eshop game developed by Mode4 and published by Plug In Digital, as it explodes onto the Nintendo Switch.

Set within the premise of spaghetti westerns, Bombslinger is a retro-styled game that bears its inspirations in a cross between the genre of rogue-likes and the Bomberman franchise. You don the cowboy hat of Mc Mean, a once ruthless bandit who has turned his back on a life of crime to settle upon the peace and tranquillity of a rancher with his wife. One night, their ranch is attacked by his former posse and set alight in a blaze of destruction, as they seek retribution for his decision to change his lifestyle. From his blazing ranch, Mc Mean appears at the entrance, cradling the body of his dearly departed as the remaining gang members watch on from the hills. Determined to avenge the murder of his wife, Mc Mean sets off across the wilderness in search of the gang to finish them off in a very explosive way.

Set across four stages that contain several levels each, Bombslinger sets you off on a journey of procedurally-generated landscapes in which you battle various foes in your quest to seek out each one of the gang members. Using the template of Bomberman, each of the levels presents you with a maze-like landscape of varying shapes and sizes. Incorporated within, several enemy types from rams, pitch-forked farmers, gunslingers and bomb flingers patrol the terrain and it’s your job to clear them out before progressing to the next neighbourhood. By dropping bombs, you clear a path to freedom by destroying any obstacles that stand in the way of you and your foes and in following the patterns of their patrols, you then need to strategically place these bombs in order to send them to their maker. Once each level is cleared, several paths open up that allow you to explore the further regions of the wild-west. 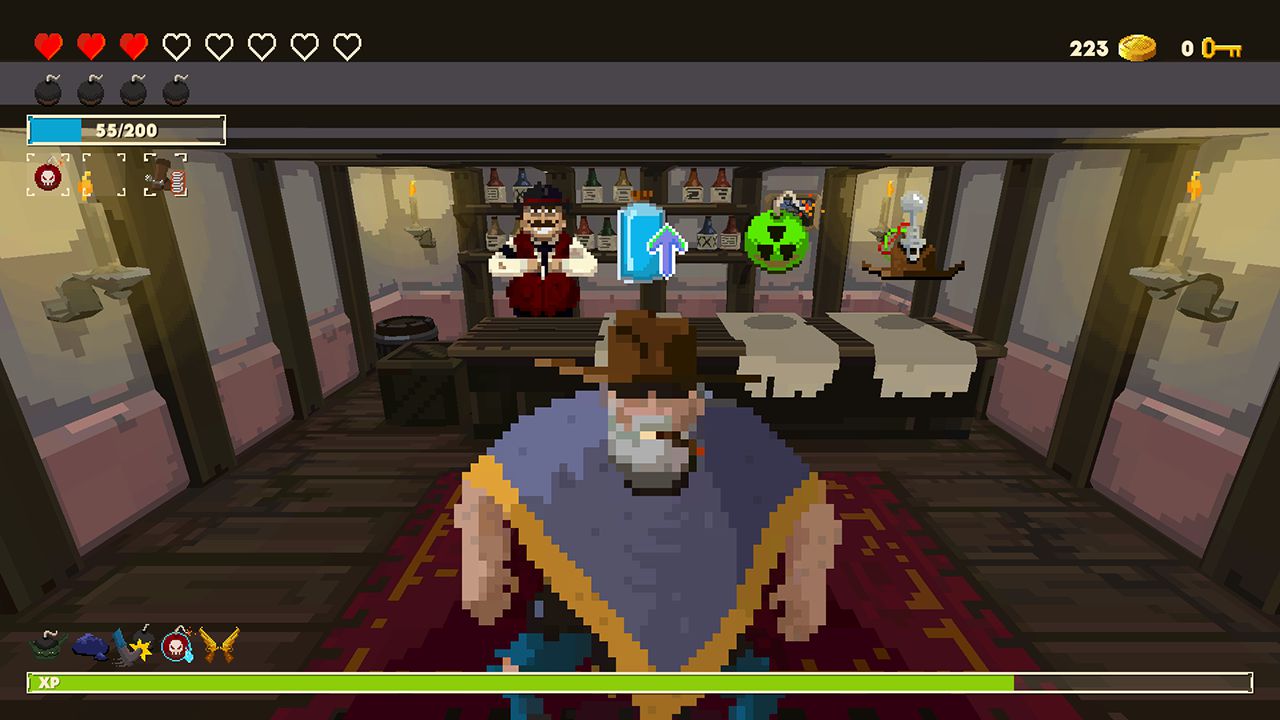 With the destruction of each enemy, various forms of loot are left in their wake. Money bags, gold bars and keys can be collected; all of which can help you in your quest. Each of the paths that you open up lead on to different locations. Some of these contain foes which need to be extinguished, others contain treasure chests that can be opened with collected keys and others may contain a general store in which you can spend any accrued gold on helpful items. Whether they’re chests or the store, the items they award you with can offer stat-increasing boosts, luck, extra hearts and refills for more life plus many more weird and wonderful concoctions that have varying effects. Some enemies can even drop guns with which you can take out enemies from a distance, something that can be particularly useful with certain types of enemies.

Following your handy map, you can explore the whole region within a level; clearing a path towards to your ultimate goal: a boss level containing one of the former Mc Mean gang members. It’s often a good idea to make sure you fully explore each of the levels, as equipping yourself with items will help greatly with the challenge that these boss fights present. However, saying that, each of the bosses work in the same premise as many of the normal enemies you encounter in your travels, in that they possess a pattern to their movements or attacks that, once learnt, can make these encounters much more palatable.

Killing enemies also grants you experience points that level up your character. With each level gained, you get to choose from three items which can help in building up your stats. This also gives another reason to the importance of exploring each level fully as these XP boosts can grant abilities such as extra bombs, wider explosion radiuses and faster walking speed. 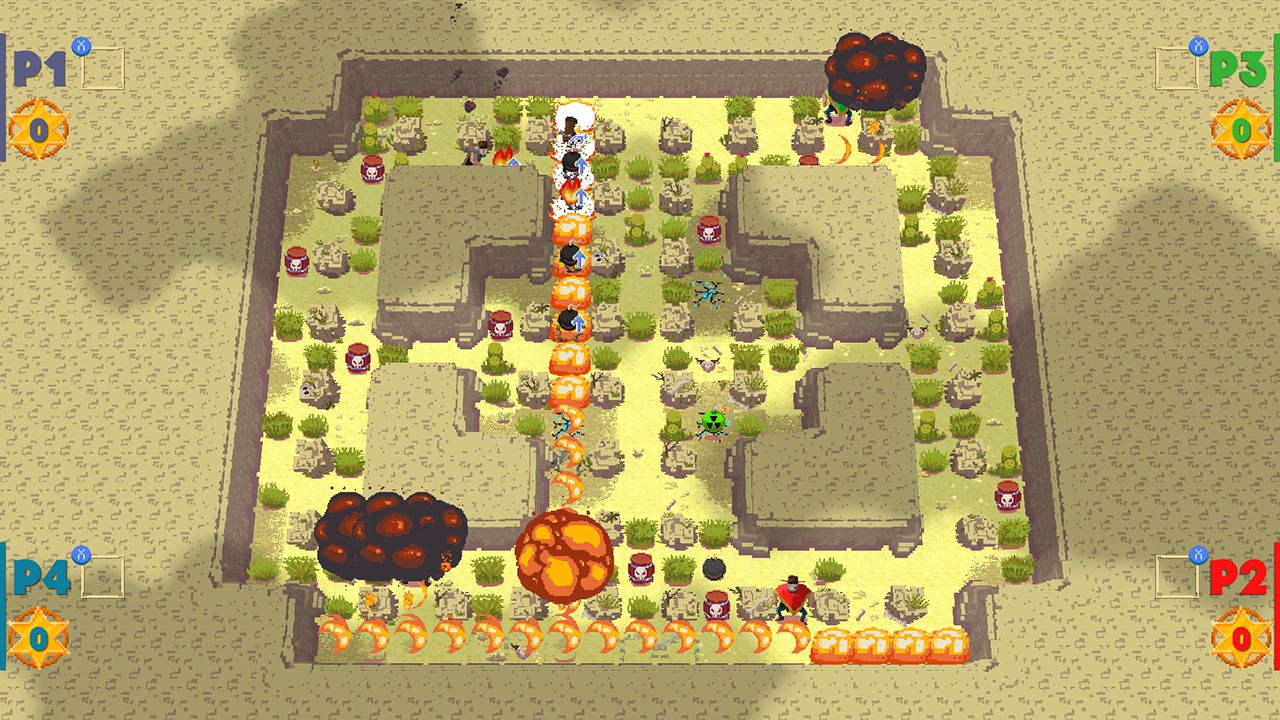 As well as the single-player offering of a campaign or adventure mode, Bombslinger also incorporates a multiplayer element that can be played with up to four friends, or against up to three CPU opponents. This battle mode offers two variations of play; Death match and Last Man Standing. Both play in a similar mechanic, with Last Man being played in rounds and Death Match being a continuous match with limited lives. Each of these modes offer personalisation options where you can alter the amount of rounds, lives and opponents. This multiplayer element plays more like the familiarity of the Bomberman series with a series of power-ups and items that enhance your abilities. With several maps and variations in gameplay on offer, including ‘geronimo’ moments that alter the landscape of maps, this is a welcome addition that can further enhance the longevity of the title.

Bombslinger offers a fair challenge that is easy to play, but can be difficult, or at times, frustrating, to master. The wide variety of enemies have different patterns, or behaviours, that need to be learnt or understood, with some normal enemies bringing a challenge that are more difficult to overcome than some of the boss battles. Its presentation is very much within a retro-style aesthetic, with pixelated 3D sprites and cut-scene graphics that are very reminiscent of the Snes or Megadrive eras of gameplay. The sound effects are adequate here, without being annoying and its rock soundtrack has a western flavour that fits in well within the settings of the game.

Overall, Bombslinger offers a fun experience. However, with its rogue-like features and retro graphics, it doesn’t quite match-up to the spit-and-polish presentation of its Bomberman-inspired roots. Its difficulty level offers a balanced challenge, although some of its tougher enemies can produce an air of frustration with the mechanics of their execution. Its multiplayer functionality is welcome and does offer a satisfying game style which can be a blast to play. If you can see past its flaws, then there is a lot on offer here, especially with its campaign, item unlocks and skill tree progression. However, everything that this game has to offer is nothing new, or doesn’t really contain anything that hasn’t been done before; and what it does have, has usually been done better in previous titles that follow within the same genres as Bombslinger, which in turn, leaves the game feeling nothing much more than average.