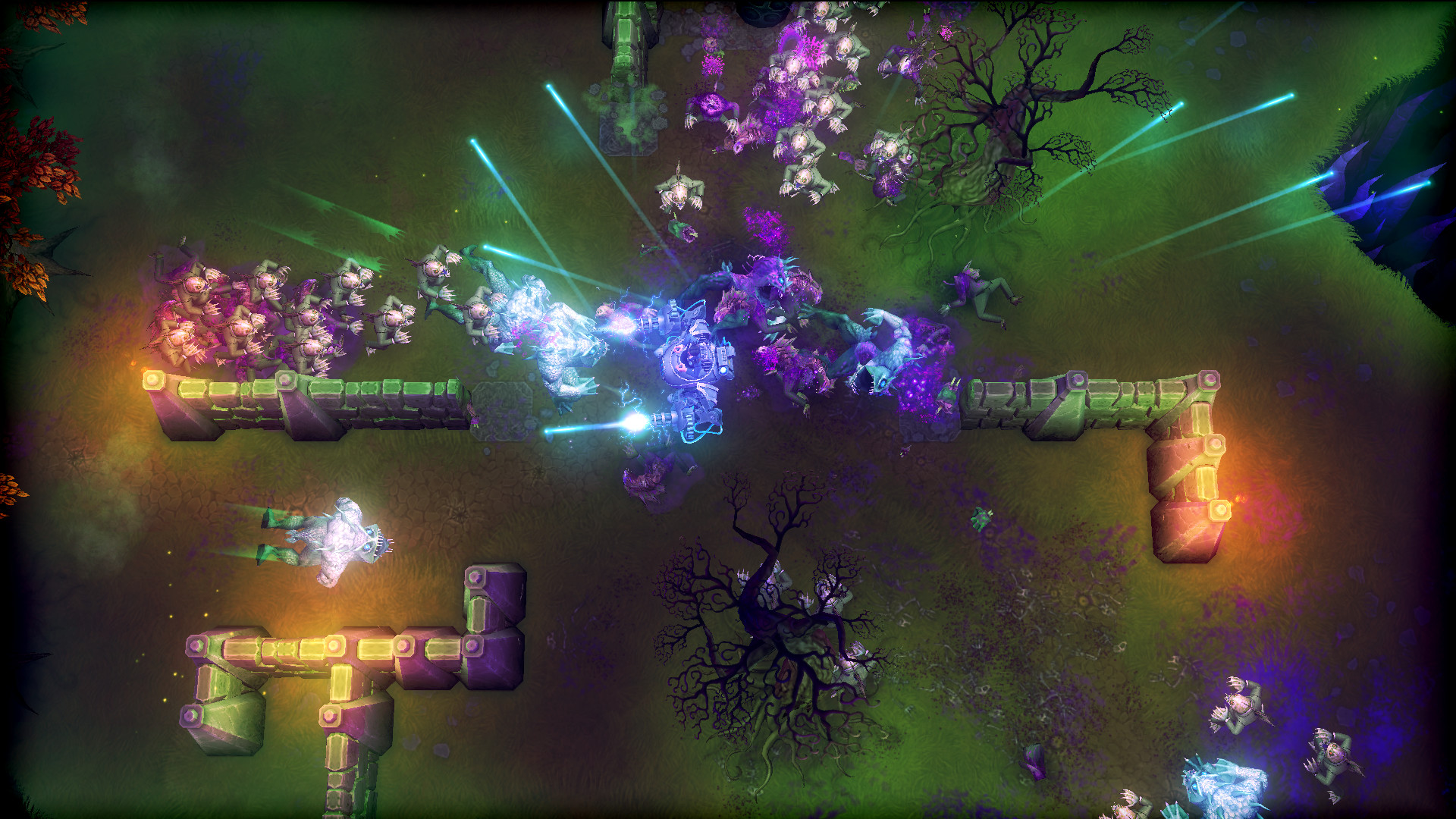 Twin-stick shooters, sometimes called dual-stick shooters, are a sub-genre of the overall shooter style games we all know and many of us love. The basic concept involves a top-down perspective where the player uses one of the stick controls on a console controller to move while using the other stick control to shoot. Pretty basic, and many of these styles of games though the years have been just that. Basic. Enter Tesla vs Lovecraft and the genre is no longer basic. Pay attention, game developers, the stakes have just been upped drastically and we will now all expect much better from you.

In Tesla vs Lovecraft you’ll play as Tesla who finds his laboratory on fire one night after he gives a speech about his work. Horrific creatures are making off with his equipment when he arrives on the scene. What’s an inventive man such as Nikola Tesla to do but make use of his inventions to fight back, reclaim his tech, and continue to change the world?

Let’s get the obvious out of the way. We all know Nikola Tesla and H.P. Lovecraft did not professionally coexist. Their lifespans only overlapped by a handful of years, so let’s just suspend that reality and embrace just how cool it could have been if they had coexisted and knew each other. And may I say I’m nothing but disappointed the real life Tesla didn’t invent a monster-slaying mech suit? Now that reality has been put aside, we can let out our inner child and enjoy this extremely fun game. 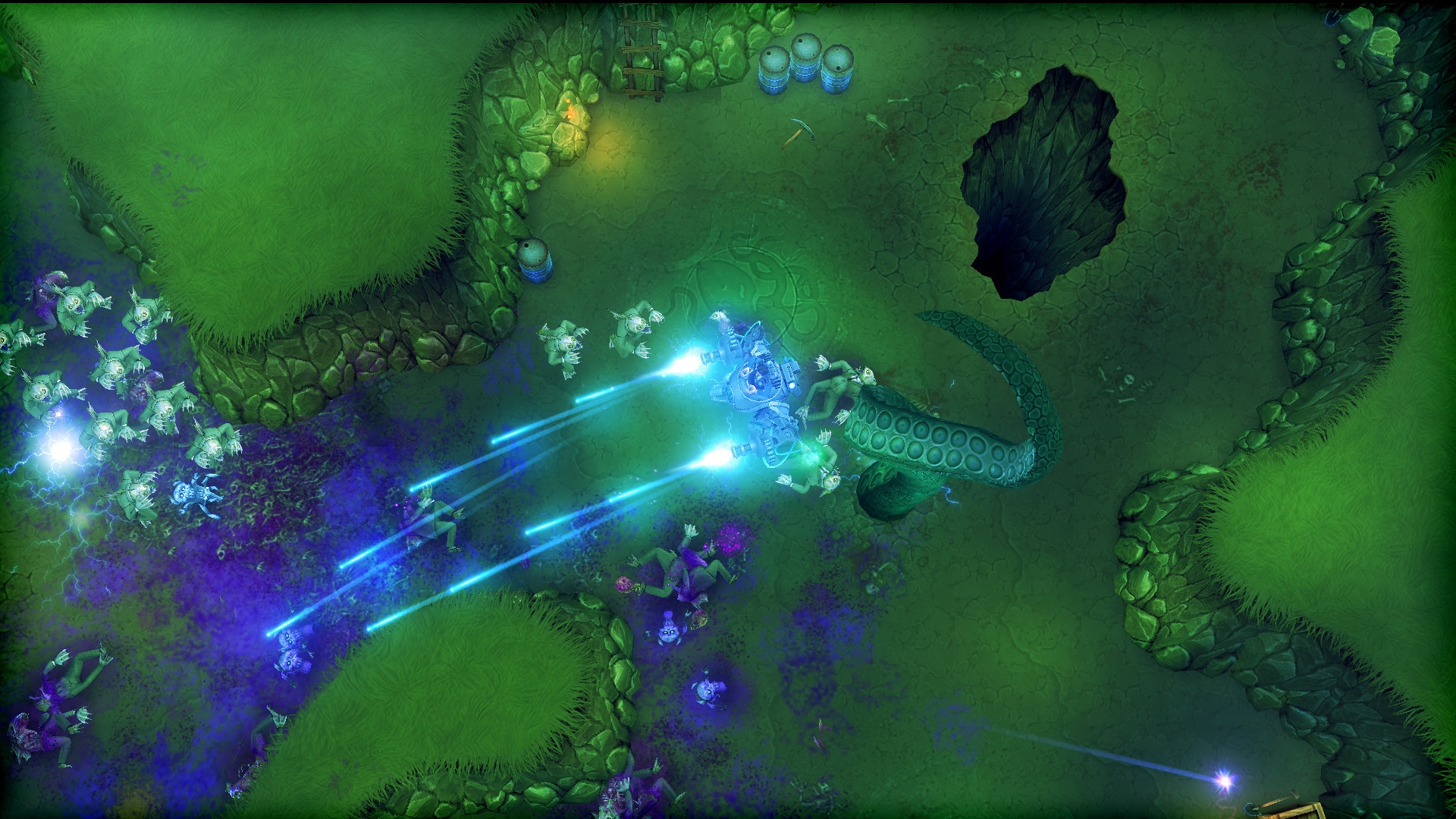 The levels start of fairly simple, giving you a chance to get used to the game play controls and find a rhythm that works for your play style. It will take a few rounds to get used to the dual controls as well as the right timing on your first ‘super power’ which is being able to teleport up to three times on a cool down. If you go without using it for a while the uses build back up again. The teleport can come in really handy when you find yourself surrounded in a teeming mass of creatures or when a boost you so sorely need is out of reach behind a wall or fence. The ramp up on the levels is a bit steep after the first few starter rounds so be prepared to try, fail, and try again fairly frequently.

Speaking of boosts, there are two sorts. The first are scattered about the play area and appear via occasional supply drops. These can be new guns, special bullets, extra health, shields, new special attacks, and even a nuke that will blast any baddies in the immediate area the second you touch it. Further to the supply drop boosts you gain extra bonuses as you do damage and kill monsters. When the status bar fills up it will flash to let you know it is available. On the Xbox One X version you press the yellow Y button and are given two random boost options to choose from. You can take a moment to read as it fully pauses the game play while you choose. You’ll find that quickly and effectively using the Y boosts becomes more and more important as the levels get progressively harder.

The options for the Y boost are varied and as my son put it “seem to be truly random.” When I asked him to elaborate he told me that it doesn’t seem like one boost is weighted in favor of others. In the rounds he played (he’s almost finished the game at this point) it appeared he had equal chance of getting an extra health boost as it did the more frequent supply drop boost. And these can be used to cater to your own particular play style approach. I tended to rely more on the supply drops and extra health whereas my son liked the specialty bullets and special firing modes more. He has done better than me so maybe I should try out his approach soon. 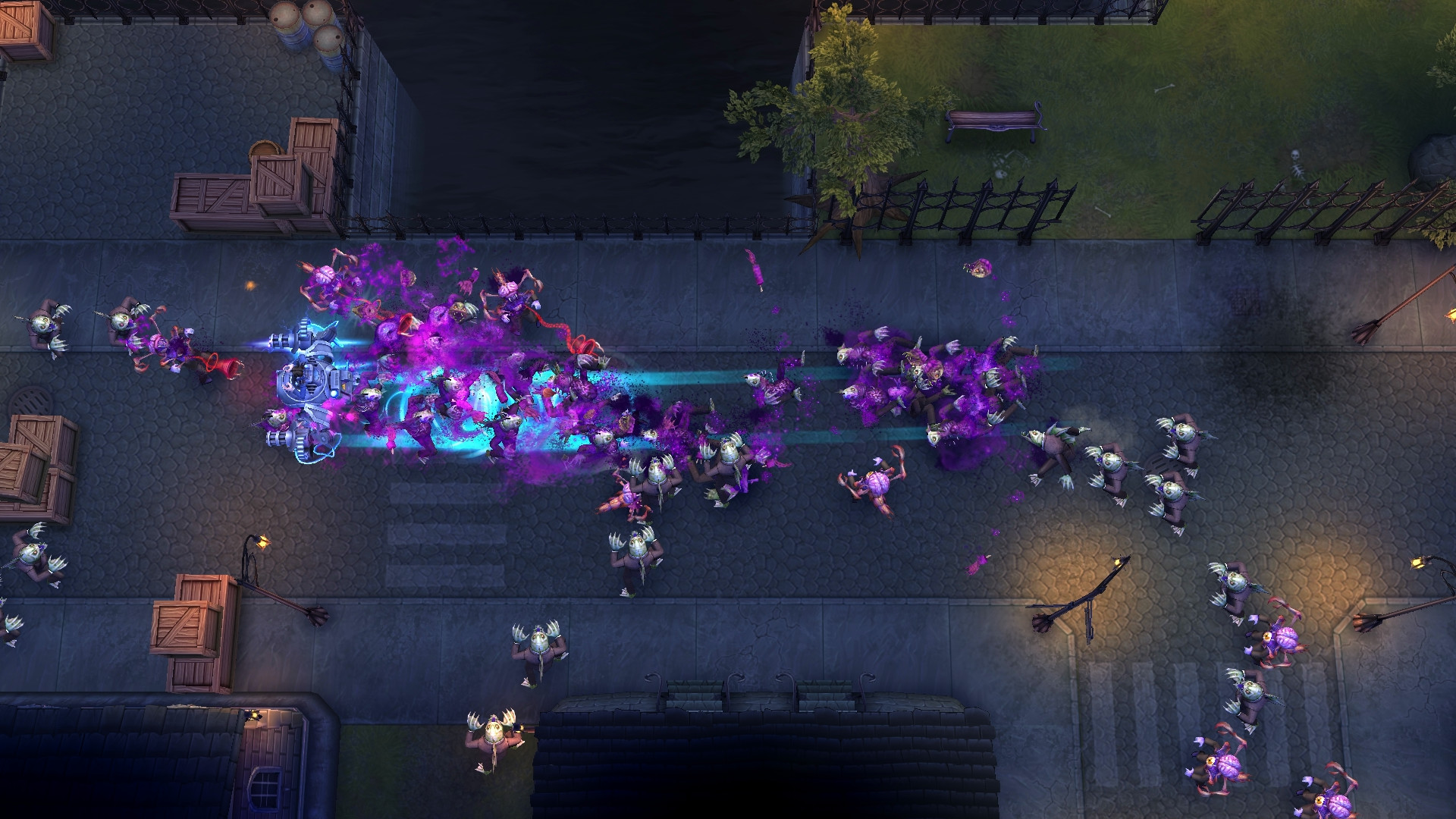 The thing that I feel makes the game the most unique is the mech suit. In the early levels you work to find all the parts to the mech and once you have them you can hop into it for some amazingly boosted game play for a short period of time. The mech shoots fast and hard and protects you from damage all at the same time. However, all good things must come to an end so once the mech reaches maximum damage it explodes away from you and back into the various parts. The difference now is that you can run around and pick up the parts to form the mech fresh all over again as many times as needed to in order to finish the level. And in between bouts of having the suit at your disposal you can rely on the supply drops of health, shields, and cool weapons as well as the boosts to keep you alive and the monsters at bay.

What makes me feel this game stands apart from the rest of the games of the same ilk? First, it is gorgeous. The bright, vibrant artwork is beautiful to look at. The animation is smooth and seamless, as well. You simply enjoy watching the game on your television or other screen. Second, the game mechanics are flawless. I never once felt like any issues with movement, aim, firing, etc. was due to glitchy game mechanics. It was always me and my ineptitude. Which can be a little frustrating at first but very refreshing once you are used to it. To know that when you failed a level you can change something in your approach and have it make a difference is an awesome feeling. Finally, the story line is new and different. I have no idea how anyone came up with this idea of pitting Tesla against Lovecraft and his creatures but it was brilliant. Perhaps it is my love of Lovecraft’s writing that blossomed in college and holds to this day or my respect for a dedicated scientist like Tesla who was vastly underappreciated in his own time or the fact. It is most likely both, but I can assure you it is rare for me to find a game story line to be truly unique and this one is just such.

The only thing that detracted from my enjoyment of this game was there are far too few levels. If memory serves correctly, there about 32 levels on each plane. You start with the Normal Plane, the physical reality in which Tesla first finds the creatures attacking his lab. When you complete all of those you move on to the Aether Plane and do another circuit. You finish on the Eldritch Plane and the final circuit. Someone with a lot of twin-stick shooter experience could easily finish this game in an afternoon. I’d love to see a second act to this story at some point.