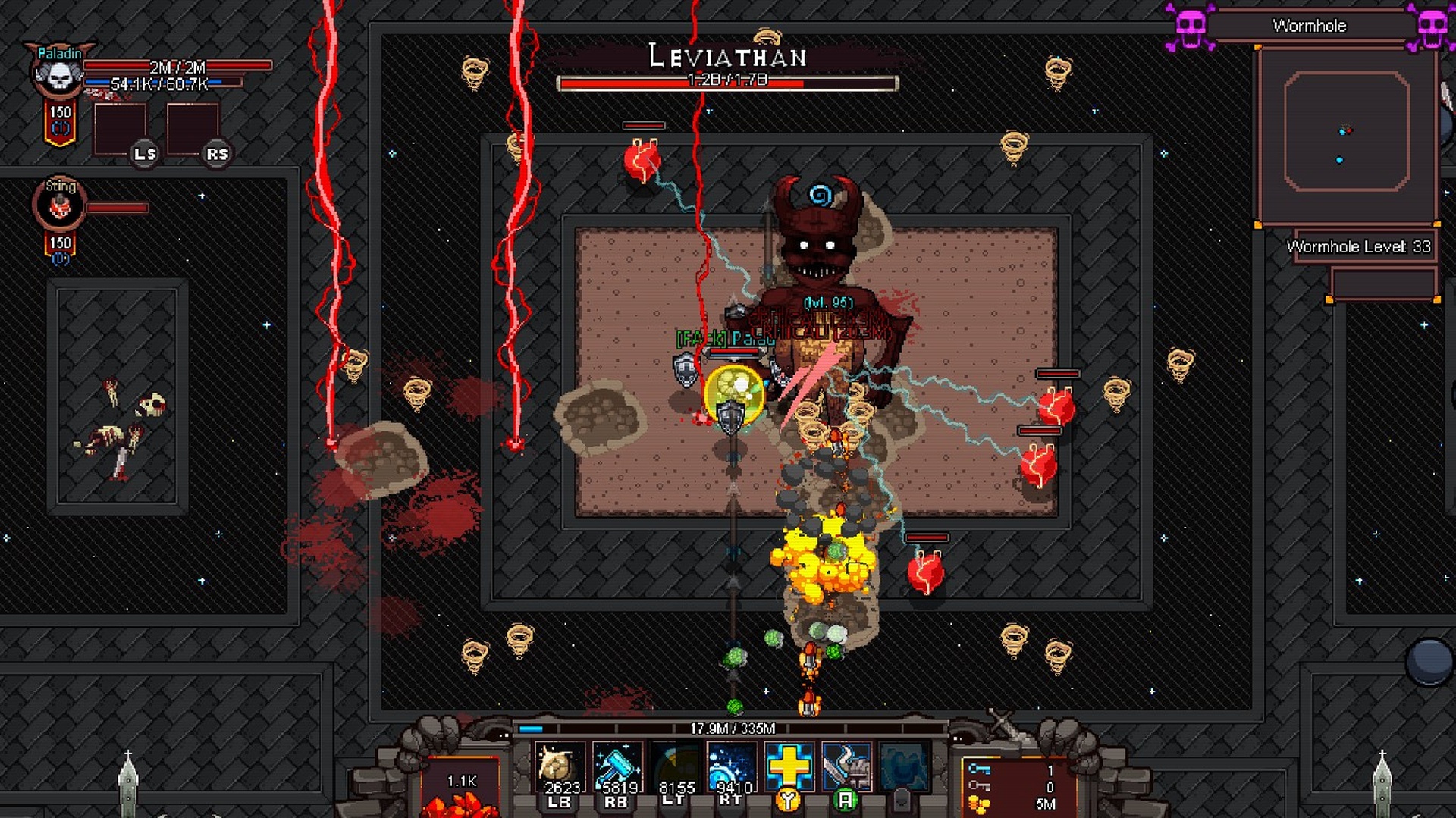 They say imitation is the sincerest form of flattery. And Hero Siege isn’t shy about showing it’s Diablo influenced roots. Ready your spells, grab your sword, and step into the summoning pad. As soon as you enter the quest area, everything wants you dead.

Hero Siege does offer 2 different ways of controlling your character. You’re able to connect a game pad and play locally with a friend, or you can stick to the basic play style and use your keyboard and mouse to direct your character and attack.

Hero Siege begins with choosing what class you want. There are 14 total classes, but only 8 are available to try from the beginning. Each class is based between strong melee fighters or ranged specialists. An example of a strong melee fighter is the Nomad, which has the perk of being faster than other characters in the game. Another example of a ranged character is the Necromancer, which resurrects your allies 20% faster and gives them a small HP shield.

The game starts off with you exploring a HUB city. From here, you can acquire quests, lock in the damage you do, sell your extra gear,level up your character, choosing your skills, and equipping any new gear you picked up along the way. This is also the place where you respawn when you die. Dying is a common thing that happens in the early part of the game, until you finally decide to focus on one particular skill and cause as much damage as you can.

The class I chose for this play through was the Pyromancer. My build focused on doing high damage, but still being able to move around. If you don’t strafe from the enemies quick enough, they corner you and you’re dead. However, if you attack effectively and make use of your hot keyed skills, you can easily take down the horde of monsters with ease. 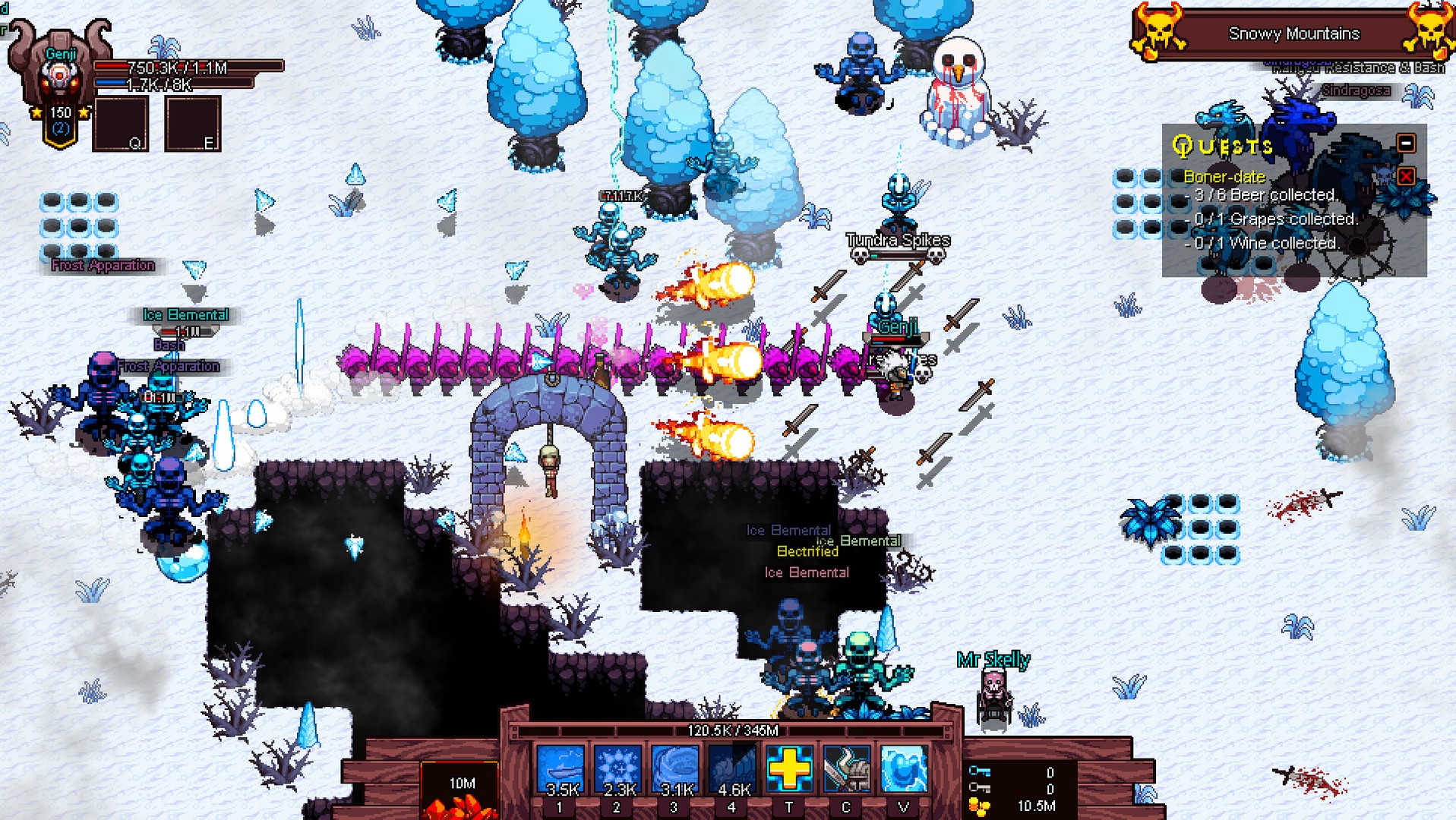 The game’s main quest consists of different acts. Though it should have been straight forward, I eventually found out what I was supposed to do through trial and error. First thing you do is once you enter the main area, it is populated by many enemies, ranging from skeleton creatures to weird green glob monsters. The second tier of these monsters are the “boss” class creatures. They have more HP and deal more damage to you, along with being more detailed of their menacing nature. Once you take down a couple of bosses, a bar appearing on the top of the screen begins to fill up. Eventually, once you kill enough bosses, an opening to an underground area will appear. From there, you’ll enter the next area and begin to solve some block based puzzles.

What’s interesting about areas in this game is that they’re randomly generated. This leads to unique encounters because no two experiences are the same when you log in. Even after beating the core game, there are still secret levels and endless loot opportunities to go after, in addition to the optional DLC to buy.

The version of this game I was playing through was the fourth season. The first season of this game began back in 2014, with their first DLC pack. It contained a new class, relics, and added another “Act”, or area where you can explore and fight new enemies. Each following season added similar things, but with new classes and areas to explore.

Multiplayer was a nice addition to this game. Being able to start-up a match with 3 other players made it convenient to avoid waiting forever in a lobby. There is also a chat lobby where you can talk to others while you’re waiting to be warped into the starting HUB area.

I didn’t dedicate a lot of time to the multiplayer aspect of this game, but from my initial impression of it, there weren’t many changes to the base game. Instead of venturing off on your own, you are in a party of four different players, working together to defeat the harder bosses that pop up in the area and hunting for loot. 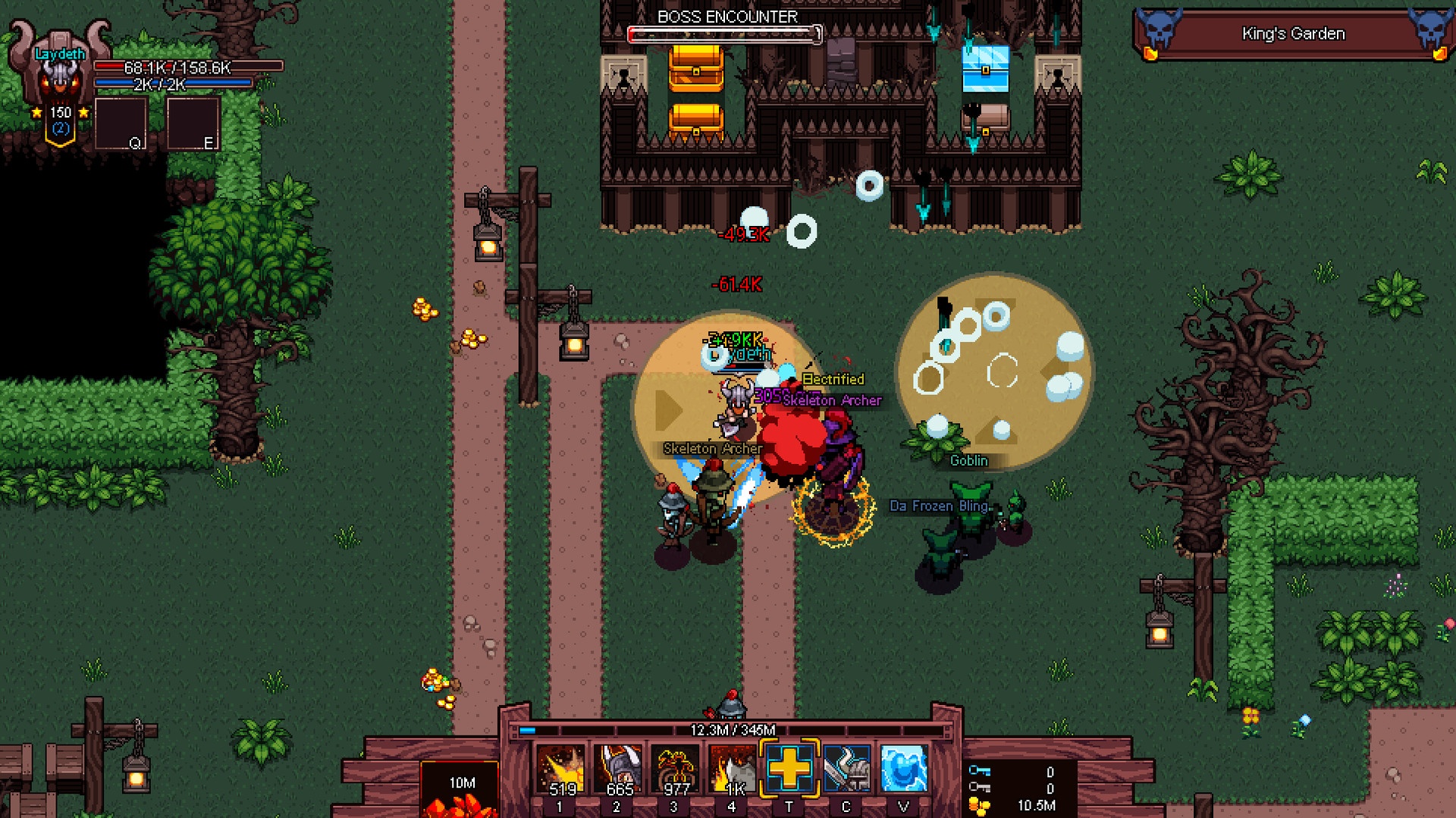 Visually, Hero Siege is easy on the eyes. The game revolves around smooth pixel art, but in a more refined style. Combine this with the monsters, items, and characters that revolve around this universe and you have an immersive, but challenging experience.

While you’re hacking and slashing your way to victory, it can be easy to forget about the downfalls of Hero Siege. First, the biggest problem that deterred was the micro transactions. Objectively, I believe additional DLC is worth paying for if it enhances the game play overall and extends the replayability of the game. In this case, it passes on both of those checks, but at the price of 6.99 per character and Act expansion feels like a cash grab more than worthwhile content.

The second thing that holds this game back from perfection is something that could also could be considered a good thing. Some modern games that we play nowadays grant the endless freedom of exploring your surroundings and playing at your own pace. However, Hero Siege lacks direction overall. If it weren’t for my basic knowledge in basic RPG mechanics of find this, kill X amount of this, and return to X character in X area, I would have been stuck in the first area all throughout my initial play through.

Overall, Hero Siege is a game that makes you dig through its flaws before you find the golden nuggets.The graphics, game play, different levels of difficulty, loot system, and intricate skill tree prop this game up in a sea of Diablo clones. This game isn’t reinventing how rogue-like games are being created, but offers a different way of how it’s interpreted. If you take the game for what it is and enjoy the genre of hack-and-slash games, then giving this game a try is worth a shot.

I can’t fully say I’d recommend this game up front. Despite the DLC being attractive and different enough to extend my playing experience, I couldn’t justify paying the same price of the core game for each piece of DLC, no matter how much content it packed. If you want to experience the base game and have no interest in the DLC, get it. If the developers of Hero Siege were open to price drops with the DLC and revamping the introduction area with a basic tutorial, I think it would be more attractive to new players.  Lastly, if you wanted to experience the entire depth of Hero Siege, I’d recommend waiting until the Hero Siege Ultimate bundle went on sale.