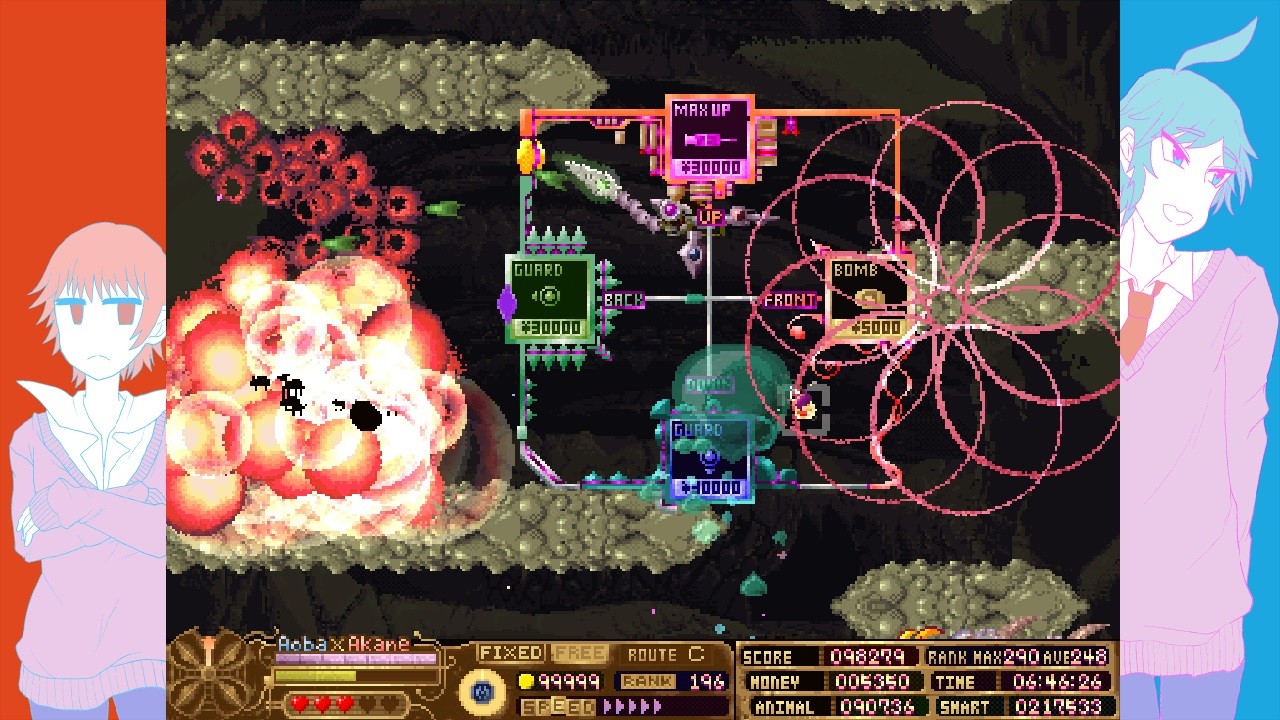 When a game is positively brain dead and broken with absurdity, it can be a bit overwhelming. There have been some titles that have kept my attention even though I couldn’t begin to understand them, and there’s usually a great catch that keeps it all together. NO THING might not be much of a game to play, but the aesthetic and colors and oddly poignant plotline kept me coming back for more. Hylics still doesn’t make sense, but the way the battles evolve and the movement across the landscape is reason enough for me to recommend it to the artistic crowd out there. With the developer HEY, I already knew there was potential for greatness: their first title, Mecha Ritz: Steel Rondo, was a favorite of mine that really meshed good gameplay with some brilliantly designed art and style. So, naturally to take those ideas and turn the abstract up to eleven or higher is very exciting, and to make it a horizontal shooter that is somehow more engaging to me than a vertical shooter is, well, it’s nothing short of a miracle. Buckle up, ladies and gentlemen and anthropomorphic animal people, welcome to Dezatopia.
Stop me if you’ve heard this one. So, alien creatures have lived within Earth for years and years, but they’ve been invisible and underground and no one knew they were there. Then a high schooler named Momoka accidentally stumbles upon them, and instantly decides it’s time to conquer the planet with them, or maybe they’re mind controlling her and using her as a conduit, who’s to say. So this girl’s classmates, Akane and Aoba, were working on this underground bridge right up until Momoka falls in line with the demon creatures, and they decide to drop everything and stop her. Not by writing letters or holding a sit in protest, but with their work ship, which has four guns on it and will blast the ever loving hell out of whomever or whatever is in front of it. Or behind it. Or above/below it. This all sounds pretty formulaic, right? No? It sounds totally insane and illogical? Dezatopia, a land where dreams come true as long as your dreams are screaming, feverish nightmares! 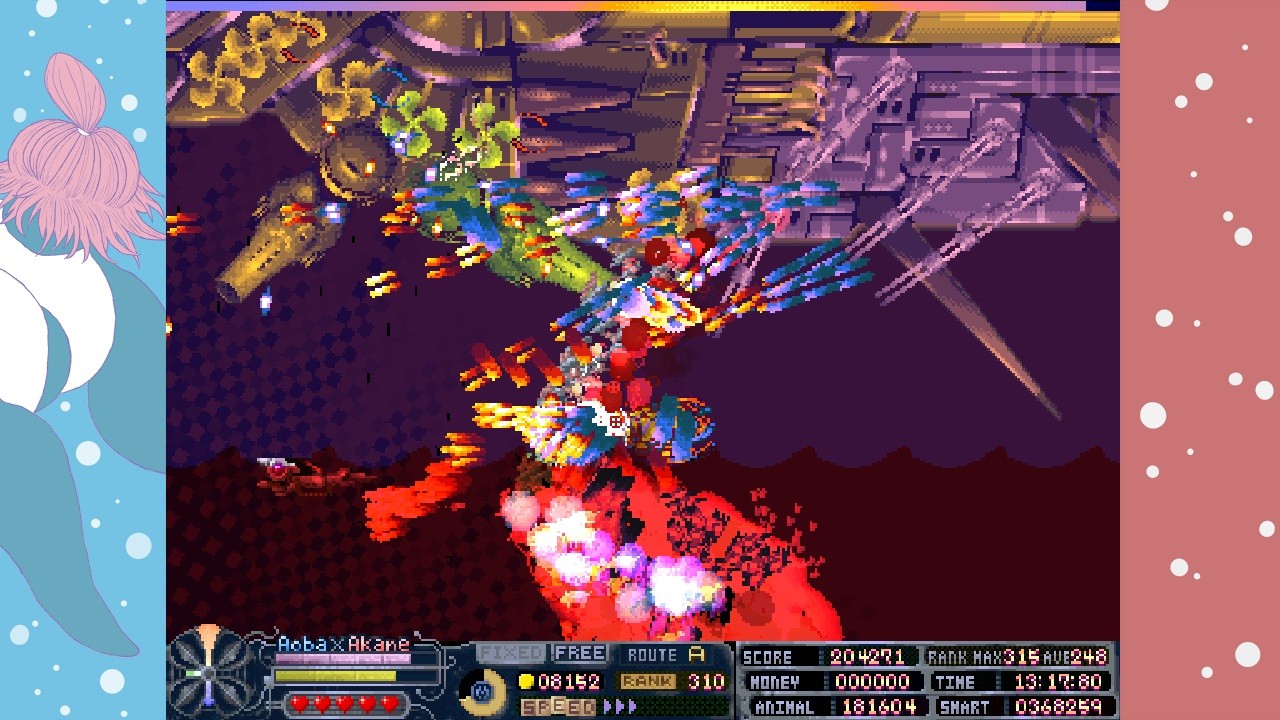 Right off the bat, I fell in love with this game because of the low rez pixel artwork. There’s something wonderful about the way that HEY crafts their games, and it captures this element of retro while offering a unique take on it. With Dezatopia, there’s this inherently gritty, almost faded look to most things, from the active ship Pink Aurora to the portraits of the different bosses as you engage with them and they espouse some especially long and hard-to-catch dialogue. It’s an incredibly ambitious game in both design and appearance, and the only trip up that I can really say in that regard is that the text boxes for the bosses do go by so fast that you need to fight them at least twice to catch everything they’re saying. And you will fight them twice, because this game is ridiculous in execution and difficulty.
That’s not saying it’s too difficult, hear me out. Once you get through the tutorial, you realize that Dezatopia is a really unqiue sort of shooter. Touching the walls or ceiling won’t damage you whatsoever, but getting stuck and pushing off the screen will ruin your whole day. It’s a horizontal shooter, and you need to worry about enemies coming from all four directions, which you make up for by having guns in all four directions. Each gun has different bullets (water bombs down, missile sprays up, a tail of bullets behind and the good ol’ energy blaster out front), and, get this, you can fire them all at the same time. This awesome arsenal is slightly kept in check by a threefold of caveats. One, you need to stop shooting to power up the stronger shot of each gun, so nonstop fighting is a bad idea. Two, more than one gun going at the same time slows you down, and all four at once brings you almost to a standstill, which is less than ideal in a race against the clock (more on that in a moment). And three, sadly, is the frame drops. When there’s too much going on in the battlefield, Dezatopia begins to lag and trip, and it can be really disconcerting in boss battles when you only have one gun going anyways. Having it happen in normal combat is simply unbearable, so try to avoid it the best you can. 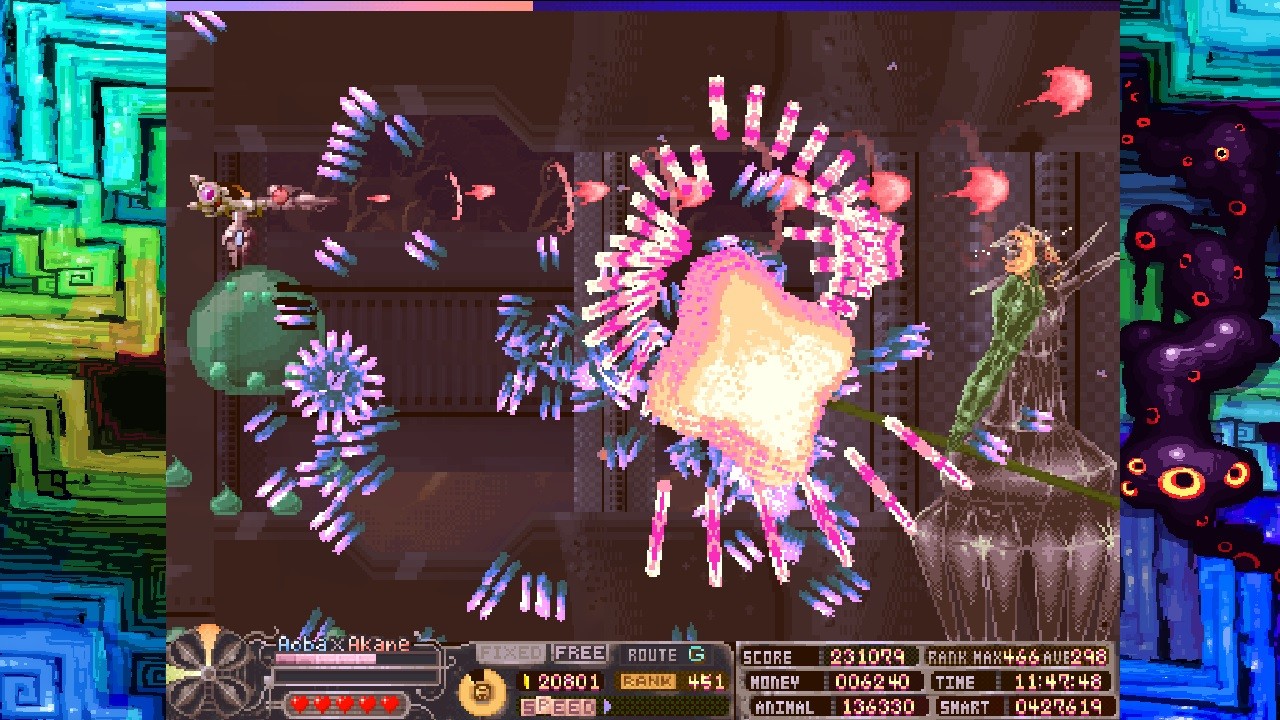 There are multiple paths to the final boss, and your own playstyle will help decide the best course for you. If you think you can beat the clock, try the initial path that asks you to beat the primary bosses in 15 minutes or less. If you’re more up for an action challenge, try and keep the ranking of the enemies at 100 or better for the duration of your fight. The ranking, and adjustable component that you can set at the beginning, decides how intense the enemies are and how dreadful the bosses will be. Keep in mind that Dezatopia will automatically adjust the ranking if you die, so don’t think your one choice is a final commitment to how you have to play for the remainder of the game. You can also, thankfully, up the speed right at the very beginning so that you can try your best to make good time. There’s also other paths, but I suck and haven’t even finished the first one, so I can’t say for certain how the others go. But I’ll be going back to try, because this game is so goddamn addicting.
There really is so much to love about Dezatopia. The ability to fire off the weapons gives you the ultimate sense of control in all four directions, and the rewards that come from not shooting constantly are worthwhile. When you aren’t shooting, you make the currency and points items drift towards you, which you need to open up the crazy popup shop that just appears after you save enough animals. The shop gives you three seconds of invulnerability (THANK GOD) as you quickly decide if you will upgrade a gun, grab some more health or pick up a bomb to make the future clear, and you purchase by ramming into the option. You fight off a thousand very hostile, colorful and funky baddies while also trying to water plants on the bottom of the screen, because plants need love too. The game keeps you bopping along with an original soundtrack that’s totally retrofuture, and it’s 40 tracks long because there is so much game here. Each path is a different set of bosses, new opportunities to work out different gameplans, and another chance to try a new border or see if stretched out screen plays better. I don’t like stretching it out, but someone might. Plus, train your fingers to activate the right weapons without even thinking. Get into a Dezatopia groove. Become a killing machine that really just wants to go back to finishing this damn bridge and saving your friend.
Dezatopia was a wonderful surprise to find on the Switch, and, minor performance issues aside, will be a fantastic addition to any shmup fan’s collection. It’s sincere in its weirdness, its quirk, and its sense of otherworldly wonder. It’s a great time to stay home and play video games: why not escape with something truly unique?

That was so weird and exciting, and I can’t wait to play it again, but first the room needs to stop spinning.