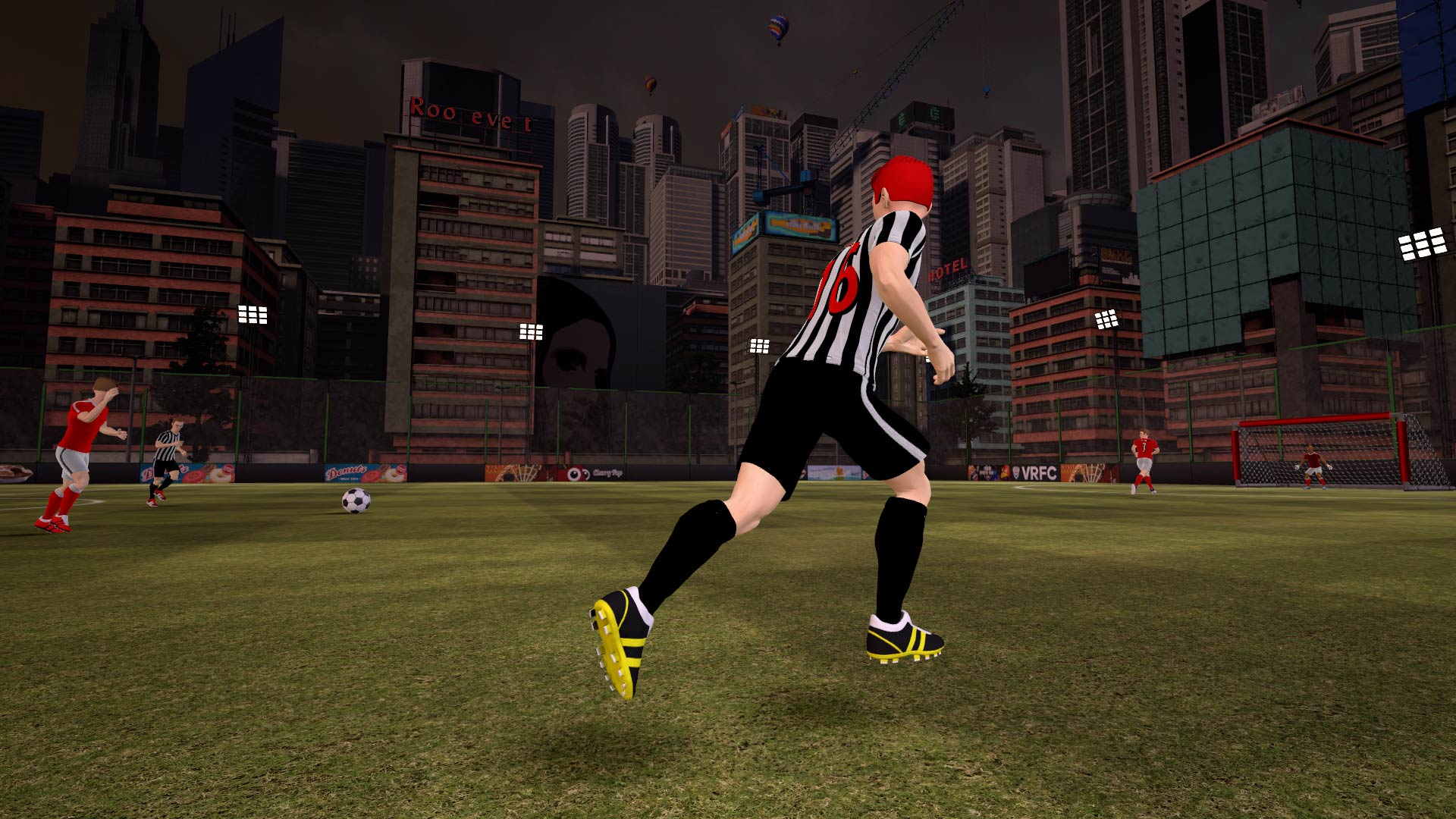 Virtual Reality lends itself so well to sports so it was just a matter of time before a football game made its way onto VR. Thankfully it’s developer Cherry Pop Games who is at the helm of Virtual Reality Football Club. Their growing back-catalogue of VR sports games make them the perfect team to venture onto the pitch. Although the concept of VR football is a strong one, the real question is how well the developer has managed to capture the essence of what makes a strong football game.

Most VR games requires a huge play area, usually the amount of space only a mansion could facilitate, however VRFC is actually a rarity in this sense. Yes you could benefit from an open area but playing in a cramped room is very possible (even while sitting down, although it advises you to stand up). This comes down to the fact that moving the controls in your hands moves your player’s legs; it’s a really neat system. You can turn by turning the controllers the same direction, strafe and run backwards by holding down a particular button and moving your arms as well as there being buttons for quick turns, dribble assist, snap to ball and sprint.

The initial tutorial is short and sweet, providing you with a good basis of knowledge for your first match, however to fully understand how to play you’ll have to delve a bit deeper and do further tutorials. There’s no denying that the controls are complex and movement can feel a bit off at first. I would chalk this up to the fact VR requires you to play in ways many won’t be used to. Fortunately there are different ‘comfort modes’, 3 pre-set ones and a slot for a customised setting, which allow you to change aspects of gameplay such as dribble assists and ball lock-on’s to suit your abilities. There’s an addition of a calorie counter to tell you how much weight you’ve lost while playing. Although these systems are never 100% accurate it is a nice extra. What this should tell you though is the game is incredibly tiring. 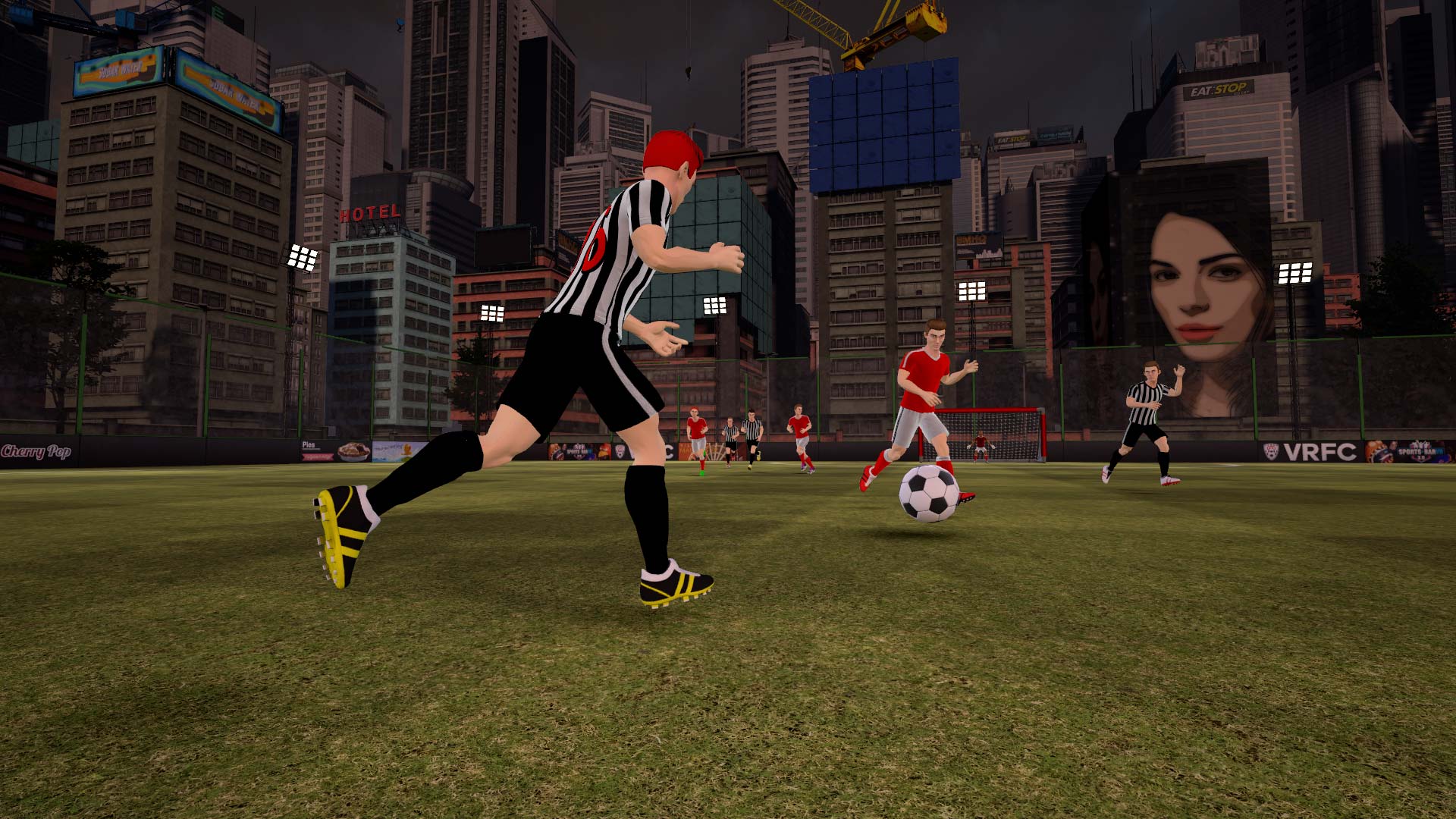 Running around the pitch dribbling the ball was a joy and felt really intuitive. One element I really couldn’t get the hang of was shooting. You do this by holding down the back trigger and moving a control, depending on the foot you want to use, to strike the ball. The physics didn’t feel very realistic and were quite unreliable, although this could just be down to the fact I need more practice. Coupled with the fact that goalkeepers are A.I. bots that are incredibly good at saving goals, scoring was a real problem for me.

I’ve played quite a few different games in PSVR and I have never had a serious problem with feeling dizzy or sick, I can’t say that streak has continued. Something about the quick turns and arm movements left me feeling nauseous throughout my time with the game. I’m sure this is something you will get use to but if you’re already predisposed to feeling sick from VR, this might be something to take into consideration.

Other than tutorials and a free mode, which sees you running around an empty pitch trying to score in either goal, the only proper game mode is online. Cherry Pop Games have mentioned the chance of a single player mode being added but until that happens the game is very reliant on a strong online community.

Online features cross-play between PSVR, HTC Vive and Oculus Rift on all 3 major platforms. With VR multiplayer games cross-play is less of a luxury and more of a necessity. Hardware can be pricey so there’s just not enough people playing to make multiplayer only games feasible right now. The game boasts up to 8 player games but the biggest game I managed was with two German players who were in a party, every other time I did quick matches it was just me and one other player. The lack of A.I. bots (other than goalkeepers) really does hamper the experience, leaving matches feeling empty and boring. 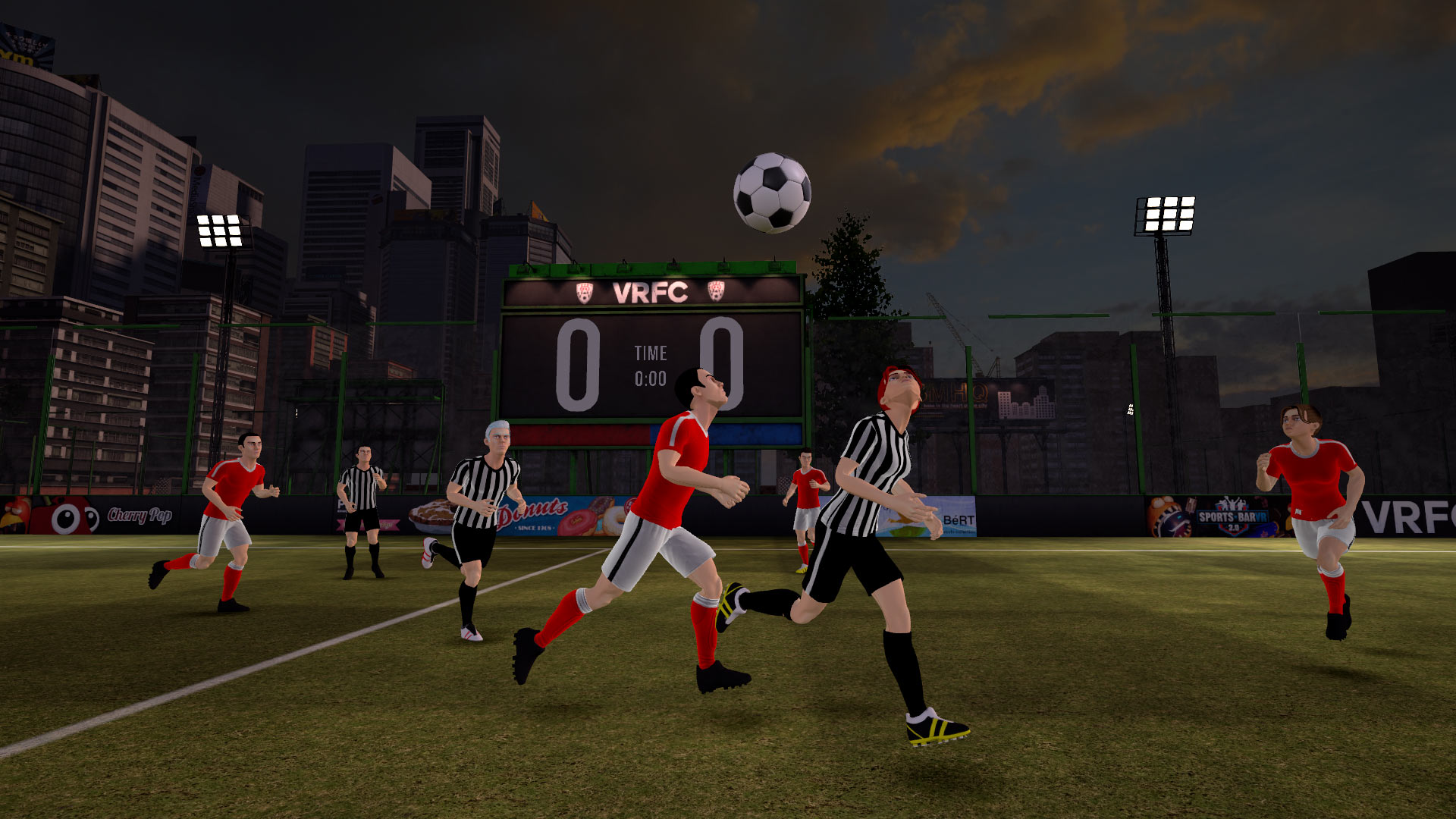 Progression comes from levelling up after matches, which ties in with avatar customisation – you can select an avatar and do minor changes to their appearance such as hair, shirt patterns, sponsors and boots etc which you will have to unlock by levelling up.

Although in the middle of a city is not a typical location for a football match, I was surprised by the quality of the graphics – there’s no denying that VRFC looks great. It is one of the more impressive virtual reality games I’ve played. Unfortunately it became clear as to why there was so much time put into the city map, it’s the only pitch you have the option of playing on. The strange location, lack of stadium and absence of a crowd seemed ok at first but when it’s the only place you’re able to play it’s a huge disappointment. The atmospheric sounds of birds chirping were initially charming, however once again it becomes frustrating when you realise there’s a lack of music, cheering or any other sounds you’d attribute to football.

If you call VRFC a football experience as opposed to a football game it’s a lot more welcoming. As the former it’s a triumph in showcasing what you can do with VR and will pave the way for future sports games but for the latter it doesn’t even have a spot on the bench. Other than the visual elements like a lack of stadiums and crowds the actual way matches are played doesn’t resemble football other than the fact there’s a ball and goals. There is no referee, no throw-ins or corners, no collision with other players, no real tackling and matches are 5 minutes without a half-time or swapping ends of the pitch. Goalkeepers are A.I. bots so conceding goals can be wildly unpredictable. It’s fair that a football game doesn’t have to be an accurate simulation but when it bears such little resemblance it becomes off putting. It is definitely a game you can have a lot of fun with but the current state of the VR market means it’s highly unlikely you have many friends that have the required equipment to play with you.

With the addition of features such as more game modes, maps, better gameplay, A.I. bots to fill team sizes and the ability to be a goalkeeper this could be a great game. There is definitely a place for an arcade football game on VR but it feels like straying away from the style found in a typical football game is more down to limitations than stylistic choice. If anything VRFC is a welcome break from the monotony of railshooters that have made their way onto the PSVR system.