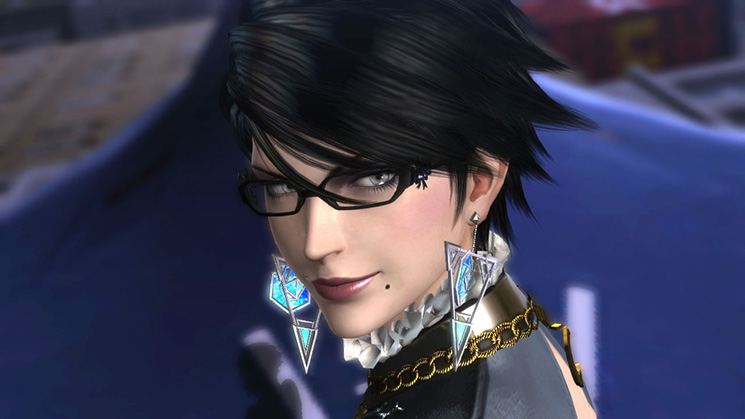 Five years after the original release of Bayonetta, developers PlatinumGames decided to follow-up with a sequel that would become a Wii U exclusive. Despite this audience limitation, Bayonetta 2 went on to be one of the best-selling titles on Nintendo’s console and, arguably, the Wii U’s finest moment. Now, four years on and with a broken exclusivity, Bayonetta 2 comes cart-wheeling onto the Nintendo Switch in a re-ported anticipation for the inevitable third chapter within the Umbra witch’s saga.

This sequel, to its critically acclaimed first offering of our favourite witch, follows on in the same vein of a hack and slash, action adventure. With a returning cast of characters, it continues the series with a new story that doesn’t require a playthrough of the first game, although it is hugely recommended that you do so. Although its basic premise plays a similar game to its predecessor, a whole host of improvements and enhancements ensure that Bayonetta 2 surpasses everything that the original brought to the table; something that becomes even more apparent with the new re-makes that are available now on the Nintendo Switch.

The story still remains as wonderful and wacky as the first. Set a few months after Bayonetta, an attack of the angels sees the Umbran witch embark upon a journey that sends her to the beautiful vistas of the Mediterranean-like Noatun and Fimbulventr, deep within the depths of hell and back in time to revisit Vigrid during the times of the great witch hunt. With its over-the-top style in gameplay and plot themes, Bayonetta 2 still oozes with the same level of charm that makes it simply hard to resist or put down. 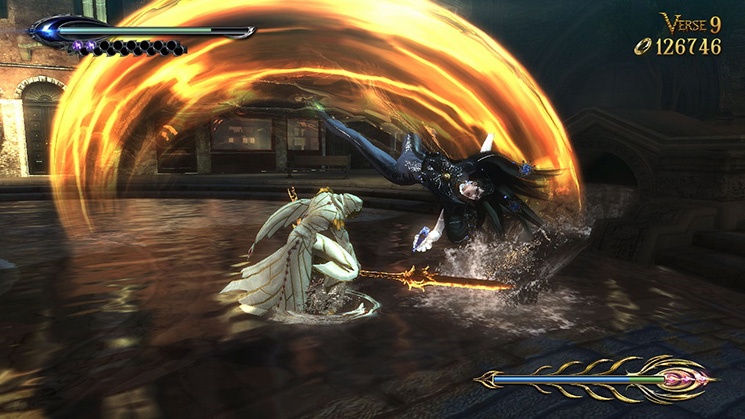 Many of the fighting mechanics still remain intact with the slow-motioned Witch Time, satisfyingly macabre Torture Attacks and death-defying Umbran Climax abilities. However, some new elements to the combat mechanics have been added with the inclusion of a weapon-glow to mark the start of an enemy attack and the ability to interrupt the combination of your foes free-flowing fighting moves. Although still challenging, these new additions can make the difficulty less unforgiving that the first game in the series; something that some players may find off-putting, although it is possible to ramp up the difficulty level to add a feel from the challenge of the original title.

As with Bayonetta, this sequel has also had an overhaul of the graphics and performance of the game with this new port. Running at 700p and 60fps, this title runs super smoothly upon the Nintendo Switch, which is something of a revelation as the fidelity of the games graphics far surpasses its predecessor. Whereas the first game had quite a limited palette, Bayonetta 2 simply revels in glorious colour, particularly around some of the paradiso locales which simply come to life in vivid imagery. In fact, this sequel is far more superior in its level design and set pieces, even though the original bore suitably satisfying levels but, here, they are simply jaw-dropping and full of surprises; such as fighting a dragon surrounded by the debris of buildings within a giant whirlwind and an angel flight as you fight a giant demon around a skyscraper, which bears a very reminiscent feel to the iconic battle with King Kong in the famous film.

The Angel Attack mini-game, from the original title, has been replaced with a different variant, Muspelheim. With portals to its other dimension scattered around each of the levels, its luring temptation in finding its gateways adds a further element to the gameplay. Containing challenges that have set modifiers, from taking no damage or defeating foes with the weapons that they drop, these interludes offer a side tracking to the main story as well as rewarding you with useful items such as Witch Hearts and Broken Moon Pearls; items which are important within the progression of Bayonetta’s life force and stats. 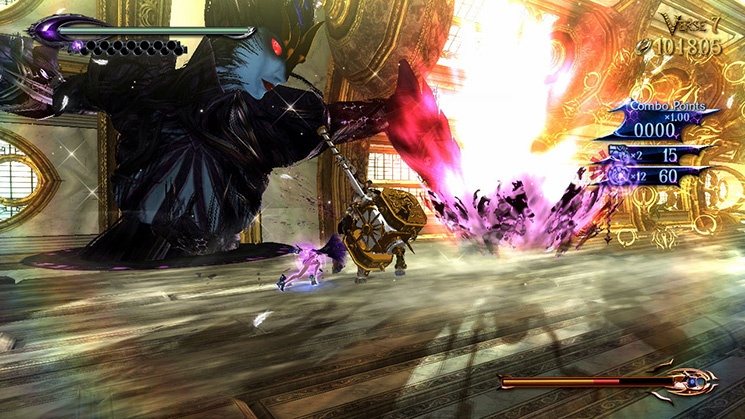 Touchscreen utilisation has also been incorporated in this new port, as it has with the port of the first game too. It’s a nice little feature that feels intuitive, however, after prolonged play it soon became a feature that was largely redundant. Despite its ease of use, the conventional control scheme just feels more natural, plus there is the annoyance of fingers blocking the view of the screen which isn’t particularly helpful when the going gets a bit extreme. All of these new features, additions and enhancements propel this port to, what can only be best described as, a definitive edition of Bayonetta 2. However, there is one particular addition that makes this game far more superior to the first.

Tag Climax mode offers a multiplayer element to the game play. With both local and online capabilities, this feature enables you and a friend to fight co-operatively, as well as competitively, against six waves of angelic enemies and demonic bosses. Using your collected Halos from in-game, you wager bets against the difficulty of each challenge with a larger pay-out rewarded at the end depending on the amount bet. These winnings can then be transferred into the main game, where you can use them to purchase upgrades, weaponry and skill moves from the returning, Gates of Hell bar. Playing through the single-player campaign and achieving certain milestones within the story, rewards you with Verse Cards. These cards then unlock further stages within the Tag Climax mode, giving the playability value, of both modes, a completely different level to the one encountered in the original Bayonetta. It certainly adds more life to the game and the overall longevity of the title.

It can’t be denied that Bayonetta 2 surpasses everything that was benchmarked within the original title. With the new enhancements for the switch port, the game has now been propelled to a higher state that plays gracefully amongst the angels of video gaming. From combat and content to graphics and playability, Bayonetta 2 is simply a joy to behold, with some truly breath-taking moments around every corner. As it stands, this is the ultimate version of a Bayonetta game, although the original still holds a very bright torch. All I’m waiting for now, is to see how the developers are going to build on what they have achieved, when the imminent Bayonetta 3 hits the Nintendo Switch as an exclusive title. If past history is anything to go by, then I am sure it is going to be a very special title indeed.