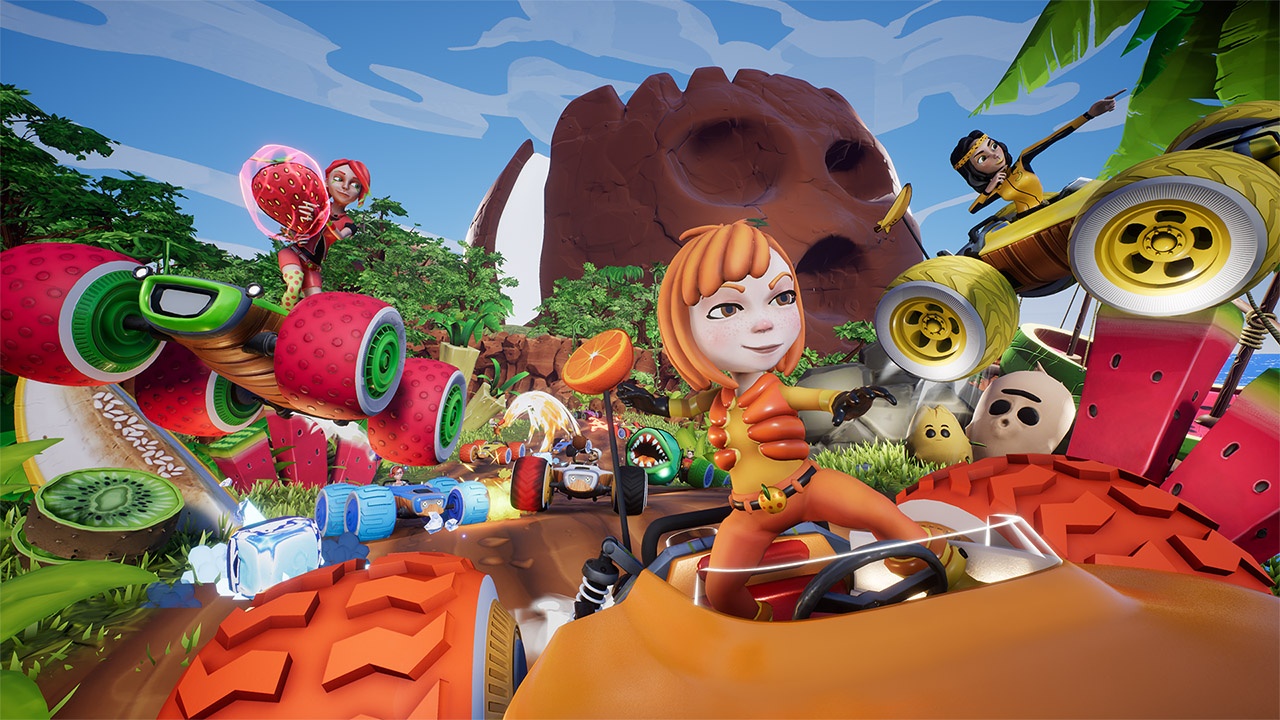 There are certain things in life that simply can’t be avoided, such as working, paying taxes, tidying your room or grocery shopping. No matter how much we don’t want to do these things, there’s often no way of getting around them. The same can also be applied to video gaming, particularly when a genre gets released after a similar title has already set the benchmark for its style. This is something that is certainly relevant when a kart-racing game gets released on any Nintendo system, as it’s flagship character pretty much rules the roost with its Mario Kart franchise. No matter how much you don’t wish to compare the two, you simply can’t help yourself from doing so. However, when it comes to reviewing games, it’s also important to view each title with an unbiased view.

Developed by 3D Clouds.it, with publishing through PQube, All-Star Fruit Racing is the latest kart racer to get released upon the Nintendo Switch and, although it bears many similarities to its benchmarked rival, it also contains many elements that makes this a game that is able to stand out on its own merits. However, not all them are as successful as others. For sure, it contains everything that you would expect from a game in its genre. A series of bright, colourful tracks, a variety of pick-ups that help to defend yourself or hinder the progress of your competitors and a series of gameplay options that range from championship modes to single races.

The first thing that you notice when you boot the game up, is its presentation values and myriad of options available at your disposal. Everything here is bright and colourful, with detailed graphics, upbeat music and animated screens; and that’s just the opening menu. From here you can select a number of options, such as play, garage, settings and unlockables. The level of choice too, is staggering in its presentation, with all manner of car customisations, character and component unlocks, as well as a five distinct kingdoms to race around; each one containing a variety of tracks. It all has a particularly fruity flavour to the proceedings, with water-melon boats floating between the kingdoms, Papaya airships patrolling the skies and seasons which determine the environments in which you race. 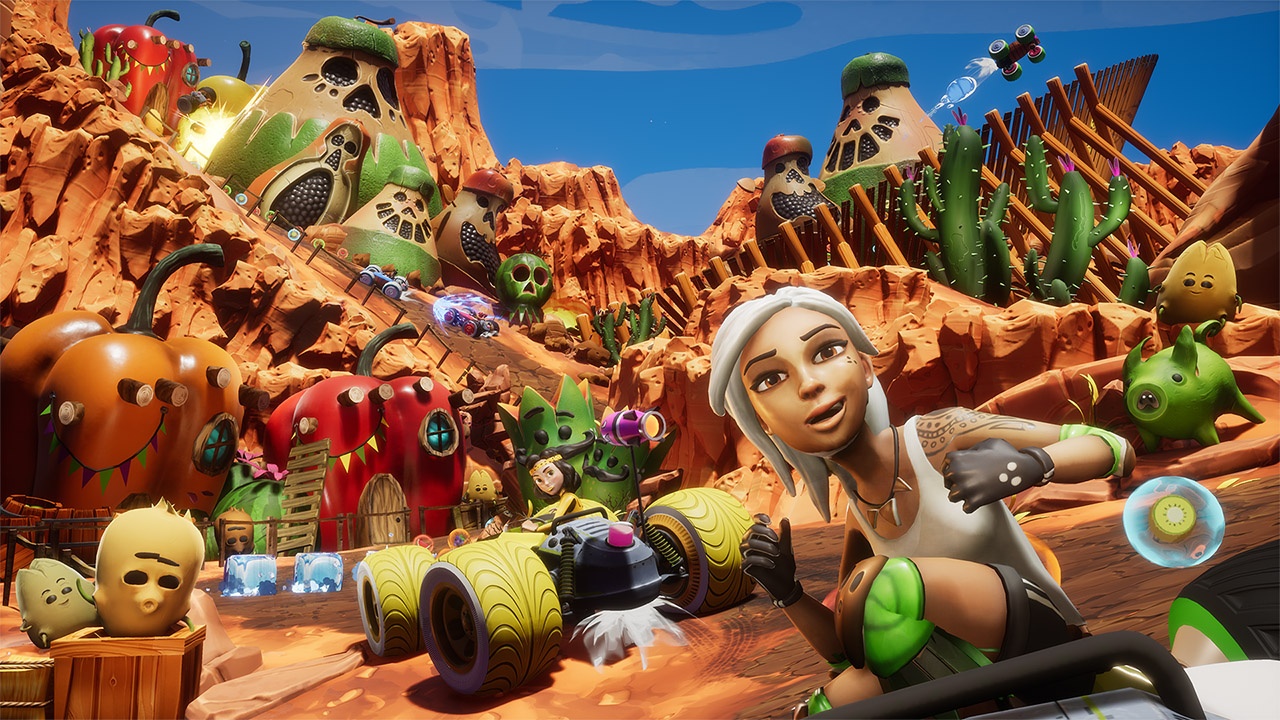 Obviously, the main staple of the game is racing, with options for career, custom, championships, time attacks and training; each one also leading to further modes such as eliminations or juicers. However you decide to race, you are then presented with character selections. From a roster of twenty-two racers, only ten are initially available, with the remaining racers needing to be unlocked. However, out of the initial selections available, none of them are male racers. Not that there’s anything wrong with that, I don’t mind which gender I play as within games, but it still seems strange that just female racers are available at first.

Although vehicles come in a variety of chassis types and customisation options, they don’t handle or perform any differently from each other; at least, I didn’t notice that they did. If I’m wrong about that, then I apologise. However, what does differentiate between each of the racers, is each of the characters own abilities on the track. Based on fruits, each of the racers possess a different array of combat and defensive techniques; particularly with the implementation of special attacks. It’s also here where the game contains a different mechanic to the one we may have been used to in the past.

As with many kart-racers, each of the tracks are laden with pick-ups that grant each rider certain styles of weaponry or defensive measures. These usually work on the premise of a single pick-up, it’s colour or content denoting what sort of power it may grant. In All-Star Fruit Racing however, weapon selection is divided into four categories; each one being a representation of a seasonal change. Picking up these varieties of tokens correspondingly fills up one of four season gauges; although some power-ups grant the power to instantly fill up each of the vials available to you. By pressing each of the face buttons, A, B X or Y, each one representing one gauge, you can create a fusion of powers to perform an attack, boost or defensive move. You can even switch certain vials on or off; giving you further options on the concoction that can be created.

This mechanic of performing attacks or evasive manoeuvres is a unique style that for the most part, works quite well. However, it can be a difficult prospect to master; requiring a lot of time and effort into learning what combinations work best. For the most part, this element of the game involved a luck-of-the-draw style of play; hoping that whatever combination you produce would be of any benefit too you. Largely they weren’t though, often activating shields when they weren’t needed or firing a barrage of fruits when no-one was around. More successful though, was the use of the special moves, something which is activated when all four gauges are filled. These produce some very satisfying results from pineapple rockets to cherry tornadoes. 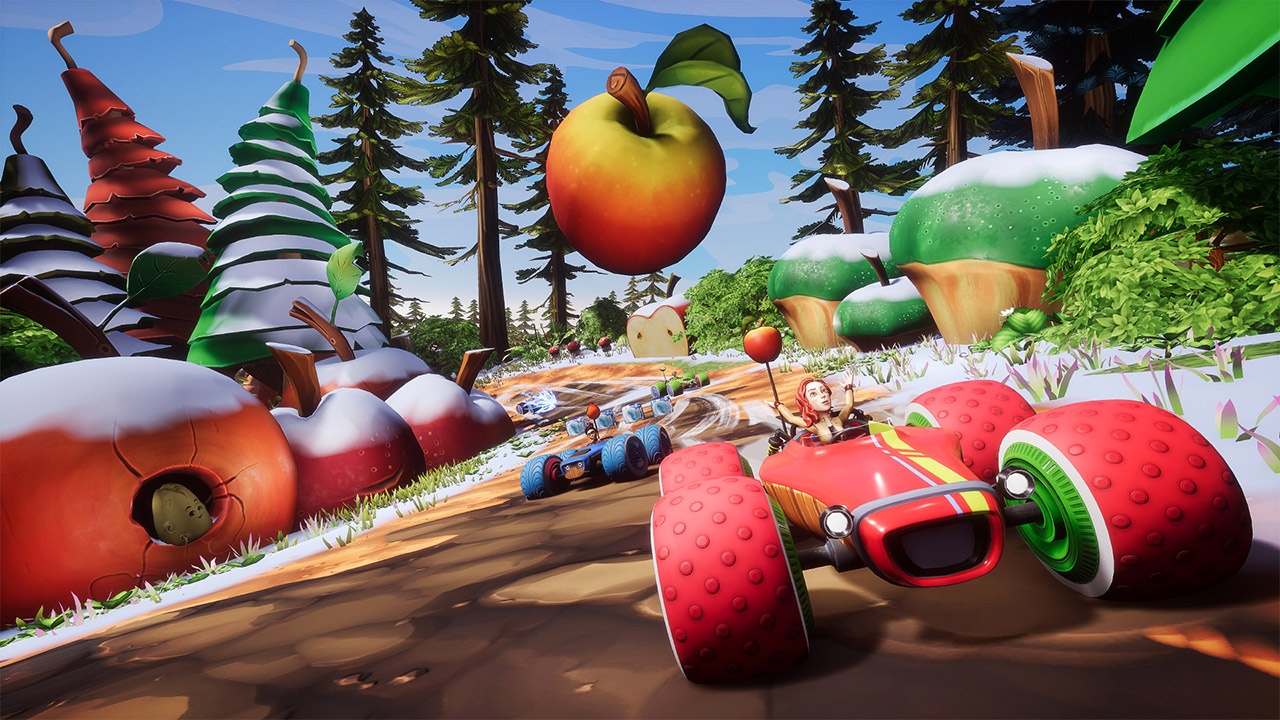 The racing mechanics are well done here too, with the AI giving a fair challenge in each of the racing modes. Tracks are colourful and nicely detailed, covering a variety of environments and multi-branched routes; it even has its own take on Mario’s Rainbow Road. However, some of the track elements can also cause some confusion in where you need to go, although the penalty for a missed turn or wrong direction is quite forgiving. I also encountered a few pop-ups and blurred textures, but these never detracted from the overall experience on offer here. Saying that though, there are some strange elements within the game that can affect its playability and presentation.

First and foremost of these, are the control mechanics. Whilst it contains the usual left thumb-stick for steering and ZR for acceleration, braking is bound to the R shoulder button, whilst drifting is implemented with ZL. It creates a very unnatural feel to the control scheme; one that can produce a crampness in your fingers as you navigate between ZR and R in order to control your speed. Second to this, I found the character models to be a bit on the creepy side with their appearances, with some of their animations being not too successful. For instance, Annie’s victory dance look like she’s trying to perform a dab, but instead looks like she has no idea on the moves required to do so. Some loading times can also be an issue at times, but none of them ever feel too over-long in their waiting times, plus they also provide a number of interesting fruity facts to help educate younger audiences.

Overall though, All-Star Fruit Racing is a very competent racer that comes very close indeed to matching the production values of its closest rival. It doesn’t quite hit the dizzying heights of Mario, but does a sterling job in trying to do so. Despite a couple of puzzling, as well as some frustrating, mechanics, it works well as a racer with a satisfying number of race modes, unlockables, characters and customisations to keep you happy for a long time. Couple this with its local multiplayer for up to four people, as well as an upcoming patch to bring online competition too, there is a lot here to keep you playing. Despite its wealth of options and satisfying racing though, its biggest downfall comes in its pricing. For just a few bucks more, you can delight in the mastery that is Mario Kart, especially on the Nintendo Switch. However, if you’re looking for an alternative racer, then this will duly deliver that experience; especially if you wait to see if it goes on sale and should it do so, then I would wholeheartedly recommend a purchase. As it stands now though, I’d recommend you think long and hard before buying this over Nintendo’s offering. However, if you’ve exhausted everything that Mario Kart has to offer, then you won’t go far wrong in experiencing the sweet delights that this fruity racer has to offer.