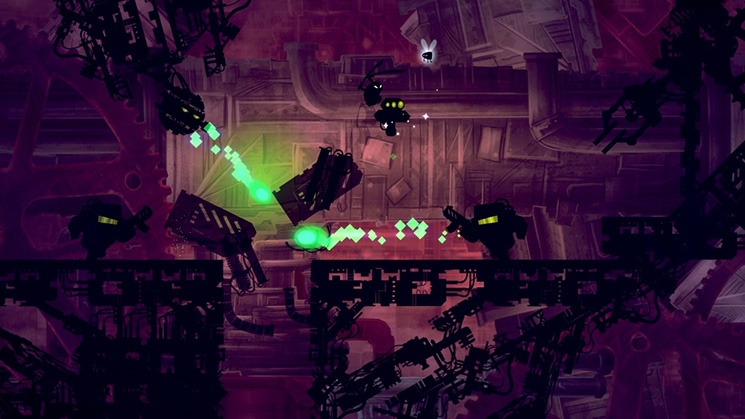 It would be easy to assume that Shadow Bug, a new title on the Nintendo Switch which has been developed and published by Muro Studios, is just another run-of-the mill indie platformer at first glance. However, don’t be fooled by its static screenshots, as this is a title that easily stands out from the crowd and has enough feet under its shell to be able to stand up on its own.

Essentially a 2D-platformer, this game also contains a completely unique mechanic in its operation. You play as Shadow Bug, a super, mini-sized, ninja hero who has taken it upon himself to save his home, within the forest, from the mechanical destruction of a nearby evil factory. With its modern monstrosities taking over the scenery, spewing out a variety of horrors and mechanised monsters, it’s up to you to slice-and-dice your way through a total of thirty-six twisted, yet very beautiful, landscaped levels in your quest to bring normality back to the forest.

As the Shadow Bug, you need to traverse through various landscapes by means of hacking and slashing the monsters that reside within. The uniqueness of this game comes through its varying control methods. With both touchscreen and conventional controls, you can direct our ninja friend to the left and right, but in order to jump, or ascend to the dizzying heights of platforms above you, you need to propel yourself towards the enemies that appear on-screen; and it’s here where the uniqueness of this title really makes itself clear. Basic movement can be controlled via the left thumb-stick, or by holding down your finger on the screen in the direction you wish to travel in. However, in order to jump you either need to touch each enemy with your finger, or select the monsters on-screen by the use of a motion control. 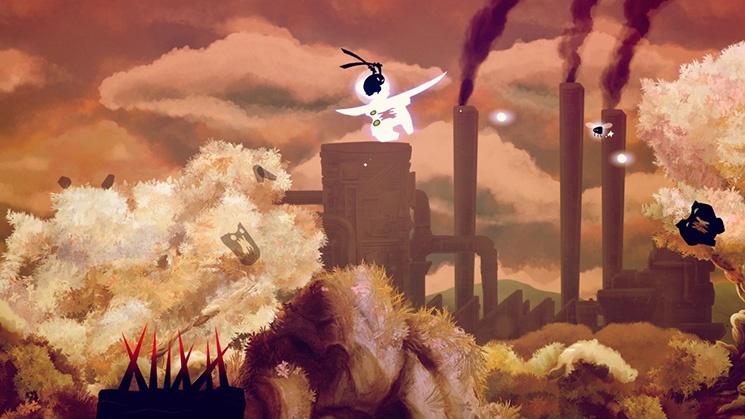 This mechanic only works depending on how you are playing the game. The use of the motion controls only function if the Switch is docked, as does the touchscreen element only come into play when used in the handheld mode; however, table-top mode can also be played in the same way as if the switch was docked. Using the joy-cons, either with one in each hand or by using the comfort grip, as well as pro controller support, you take control of an ally that helps the Shadow Bug on his journey. In the guise of a fly, you guide our flying friend by gesturing the controller to move him onto an enemy figure. Once highlighted, you then press the ZR shoulder button, which then flings the Shadow Bug in the foe’s direction in a hail of swinging swords. Whilst the battle commences, you guide the fly to your next victim and so on and so forth. This immediately creates a chain-reaction style of gameplay which sees the Shadow Bug zipping through the level in a smooth transition from enemy-to-enemy.

This creates a really nice mechanic to how the game plays; with both the motion and touch screen implementation providing a, relatively, satisfactory control scheme. Although the motion control cannot be utilised in handheld mode, you can play with a hybrid of conventional and touch controls here, which sees you guiding the Shadow Bug with the thumb stick and controlling the fly with the your finger on the screen. This variance in control schemes adds a nice touch of variety to the gameplay, as you can play the game in a different style depending on how you have your Switch console positioned. It’s all very smooth and responsive, especially with the motion controlled elements of the gameplay, which creates a very fast pace to the game and a touch of fluidity to the progression of each stage.

Completing each level presents you with a collection of shuriken stars, depending on whether you have satisfied certain goals that the game requires you to achieve. These stars can be earned, up to a total of three, by completing the level, finishing it within a set time and collecting a certain amount of tokens which resembles the glow of a firefly. It’s possible to achieve all three requirements in one sitting on certain levels, but if you do miss any stars, then each of the levels can be re-visited and re-played in order to obtain a full collection. The toughest of these challenges comes in the form of beating the time constraints of each level. This really pushes for an urgency to be accurate and fluid in your execution of moves, which in turn, offers a particularly satisfying challenge; especially with its inclusion of a speed-running leaderboard, which has a very addictive quality to it. With no lives, but a one-hit-instant death style of gameplay, Shadow Bug is a game that will test your agility and hand/eye coordination. However, with checkpoints scattered throughout the levels, any progress lost through mistakes is never that far behind, which is a relief. 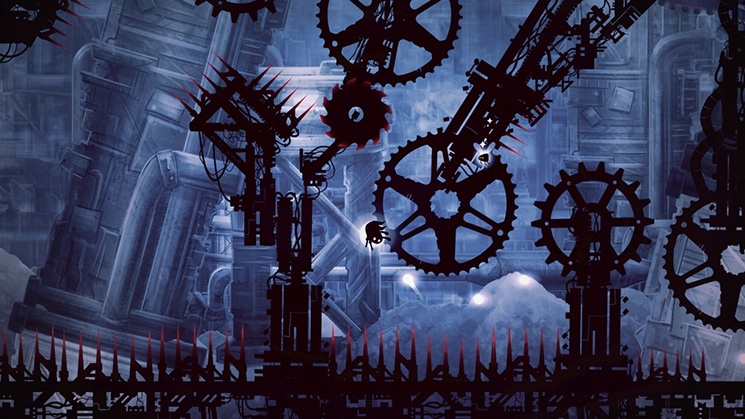 Graphically, the game possesses a basic, yet functional, aesthetic to its look. Each of the hand-crafted levels contains a silhouette of foregrounds, resembling an imagery of shadows, with a parallax background of picturesque landscapes that is full of varying colours. Its art-style really produces an illusion of looking at the game through the dense foliage of a darkened forest or the doom and gloom of a mechanical world inside the factory. The further you progress through the game, the more the imagery changes with further density and colour-changes that gives a look of resembling the passing of seasons and a coldness of steel. It all adds to a rather unique style that creates a really nice balance that is pleasing to the eye. As well as its simplistic, yet impressive, look to the game, it also contains an equally epic soundtrack that wouldn’t sound out-of-place within a film of the martial arts fantasy genre.

Despite all of this, unfortunately Shadow Bug also contains some glaring problems that comes with having such a unique take on its genre. The motion controls, although well implemented and generally smooth, do have a tendency to lose their tracking. Pressing the Y button resets its centering immediately, but this still doesn’t detract from what can, ultimately, be quite a fiddly mechanic that can frustrate, especially when trying to achieve a speed-run through each of the levels. Obviously, the touchscreen element combats this problem, but with the motion control being the only method of moving the fly when the switch is docked, produces a very unfair mechanic in forcing the player to use this scheme. This, unfortunately, leads to the inclusion of the motion control as being more of a gimmick rather than an innovative addition. Having the option to use the right thumb-stick as an alternative would have been a nice inclusion here. The touchscreen also has its problems, with much of the display being covered by your fingers, there is a tendency to make errors with the unseen, or blocked view of the elements within the scenery

Overall, Shadow Bug does play well, despite some frustrations. It’s a sublimely easy game to get into, but also a difficult one to master. It offers a decent challenge, especially if you’re keen to garner each of the stars per level, which requires a good deal of concentration and focus; especially the further you progress with its increasingly complex puzzles, level designs, speed runs and six boss-battling levels which really do provide a test on your reflexes and dexterity. It doesn’t contain massive amounts of depth, but what is does offer is enough to keep you entertained for a while. However, its long-term appeal may peter-out quite quickly. Despite its problems, the motion control is something that should definitely be experienced. When it works well, traversing each level becomes an absolute joy and produces such a fluidity to the gameplay that it simply soars above other games within its, already packed, genre.