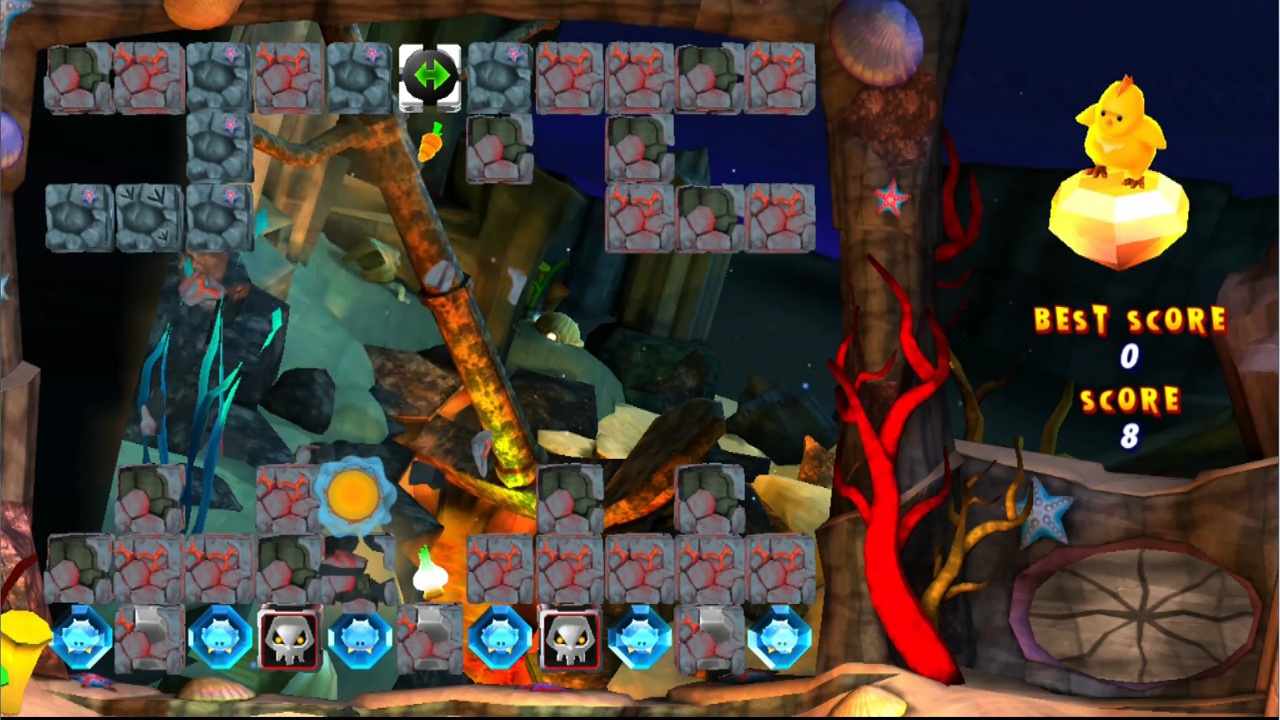 When I criticize a game, there’s a lot to take into consideration as far as how my scores and opinions might line up with a readers. For example, I’m a huge RPG and adventure fan, even if I don’t have as much time nowadays to dedicate to long scale titles as I used to. Games that run under 10 hours tend to be right in my wheelhouse, because I can dedicate a couple of days (or one awesome night) to banging out the game and enjoying it from start to finish. Additionally, I have a soft spot for some puzzle games, just not all. Puzzle games are one of the most definitive “game” types, certainly one of the oldest, and a good puzzle experience is worth ten mediocre shooter games. So it pains me when a game feels like it should be right up my alley and it just…doesn’t go. Without any other anesthetic to brace the pain, I present Gem Smashers.

Gem Smashers is a weird little tale about a foreign planet that looks like it’s inhabited by the genetically modified cousins of Neopets. They’re all chilling and enjoying being animal freaks when, suddenly, what looks like a meteor crashes into the planet. Turns out, it’s actually aliens, and they’re here to harvest all the shiny stones that are in the soil and also enslave the other animals by making them into gems or something. Truth be told, this part is incredibly murky because there’s no text and no dialogue, just a quick series of pictures that I gotta piece together as the game gets me ready to begin. In any case, you take the helm of one of three plucky monsters to fight back against the invasion, rescue the other monsters and make things a better place for everyone. It’s cliche, but it works, because why the hell else would anything be done otherwise? If the aliens were bringing unlimited energy and the keys to perfect health, we’d be real jerks to fight against them. Nope, interstellar strip mining and enslavement, the winning combination.

As soon as the game begins, you get to select one of three monsters, Bau, Bam or Bom, who are a crab, a bird and a blue hedgehog (no relation) respectively. This is a weird situation, because they’re each different, but you’re told, right at the beginning, there are blocks at only Bam can destroy, and I guess that’s a big deal? Bau is the balanced one, Bom is the fastest one (coincidence, I’m sure) and Bam is the brutishly strong but slow one, which is hilarious because Bam is a yellow chick. The object of each level is to break the gems that appear on the screen by matching your color to aforementioned gems and then ramming into them. Three quick caveats. One, you gotta change your color by bouncing off colorful turnstiles that get placed in random, inconvenient areas. Secondly, you can only control moving left or right: your character will aimlessly bounce up and down, careening off the walls as it smashes into everything. Lastly, there are death blocks also generally placed about the screen, and smacking into one “kills” you and takes away the color you’ve been dyed. You don’t actually get a game over, but it does slow you down. Oh, but if you take too long, a real death block will appear, which can and will kill you, and will force you to start over. 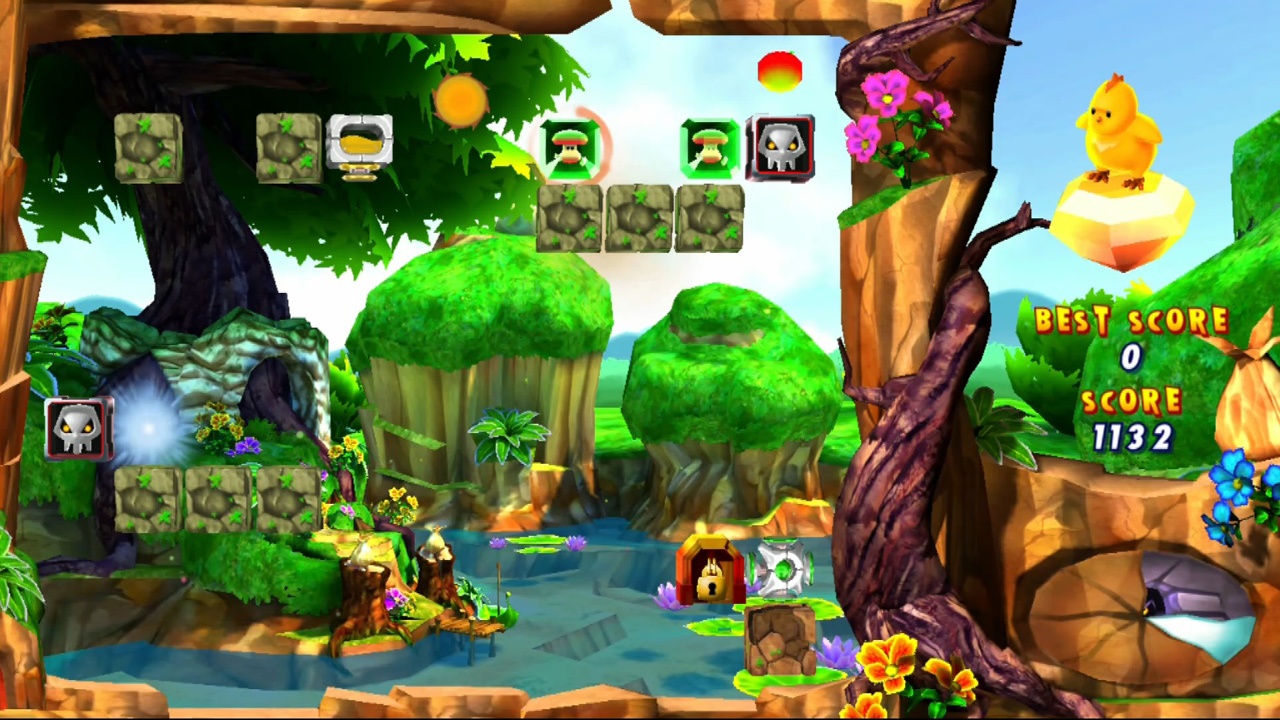 Right out the gate, something feels a bit weird about the approach to this game. Gem Smashers wants you to basically treat the game like a mix between Arkanoid and Sonic the Hedgehog, but there’s no defining correlation to either. On the one hand, smashing into the gems to break the animals free is cool, but you don’t get powerups from it or anything; you get those from literally every other block that you can find. Additionally, the neverending bouncing sometimes causes you to smack into death blocks even though you really, really don’t want to, and that’s just the least of your problems. You also end up with patterns where your color keeps changing even though you only need one hue, but screw you, there’s no room to move. There are blocks that change your controls, making left move right and vice versa, and there’s no set time limit for how long this inconvenience lasts. You just gotta tough it out and make it through. And, once you get all this in order, you need to face the boss fights that occur at the end of each stage, which are robot animals who have one weak point and must be hit with a matching color. You’ll have a few seconds to whack their color-cycling soft spot, then they’ll fly into a damaging rage that will hit and kill you, but not permanently, just a bit to slow you down.

Gem Smashers makes a strange call by creating situations that feel both simultaneously too difficult and too easy in the same swing. For example, it urges you not to strike the death blocks because it’ll interrupt your score, but that’s the only penalty, nothing more or less. Additionally, the items that fall out of random blocks range from simple things like fruit and soda (bonus points) to plunger detonators that destroy every like colored gem, a pinwheel that changes you to every color at once to speed along gem destruction, or simply changes every gem into a flower that can then be knocked off. What’s really bizarre is that the things like the pinwheel only last a few seconds, but the flower change is permanent: once you hit it, every gem stays a flower until you finish the stage. It’s incredibly unbalanced in terms of ability and helpfulness, and I seemed to run into it at least once every world. You see the map gives you different spots that have between one to five stages, and almost every spot had the flower powerup spawn at least once. Weirdly, without those flowers, I probably would spin my tires forever trying to stop bouncing off the death spots. Is it serendipity or just strange design? Hard to say. 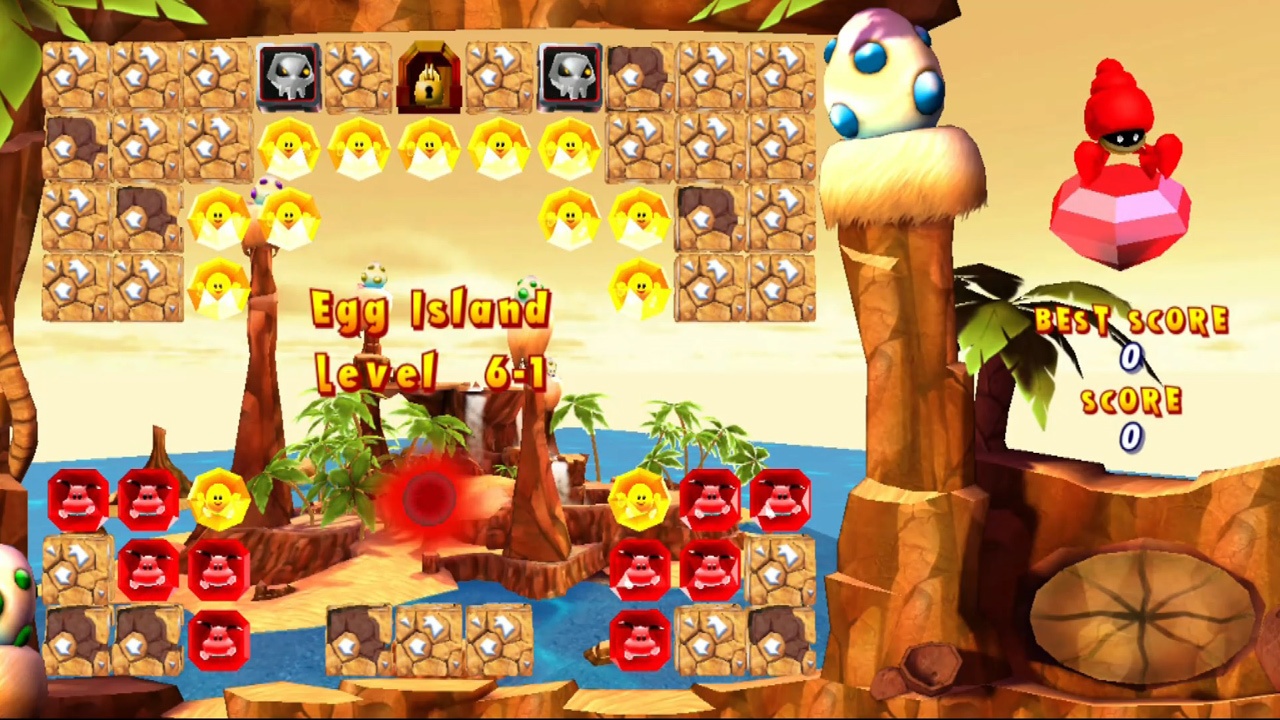 Additionally, the puzzles and the game itself is over far too quickly. I finished the first two areas in about 25 minutes max and was shocked to see the progress meter say I had done 27% of the game already. Overall, I put fewer than two hours into finishing the main story, and it really could have been as little as 90 minutes. Part of the replay comes from the Battle mode and the different characters, but there’s only three to choose from and they all play essentially the same, just faster or stronger. Plus, as a battle game, it really plays out very strangely, with the two players being parallel to each other but not necessarily interacting, like it’s less “battle” and more competitive. It’s not bad, and, as far as Gem Smashers goes, it’s actually pretty fun, but I think I just had different expectations.

Gem Smashers is one of those really fascinating cases where a game has continued to truck along and get re-released without any serious facelift or improvements to how it is handled in any way, shape or form. Starting on the Gameboy Advance over fifteen years ago, this title gets newer graphics, same story and basically the same game over and over again, even though the technology has changed. I admire that, and I do see the merit about the gameplay and idea itself. However, tragically, it just isn’t interesting to me. It never really hits that level of difficulty or pizzazz to make it super engaging, and the biggest challenge are the bosses (who aren’t that challenging) and getting four stars on each level. As we all know such kind of ranking is a self-imposed goal post, you’ll find that your dependence on good scores in Gem Smashers relies on your own interest. So, tragically, I think this game will remain forever in my “lukewarm” pile.