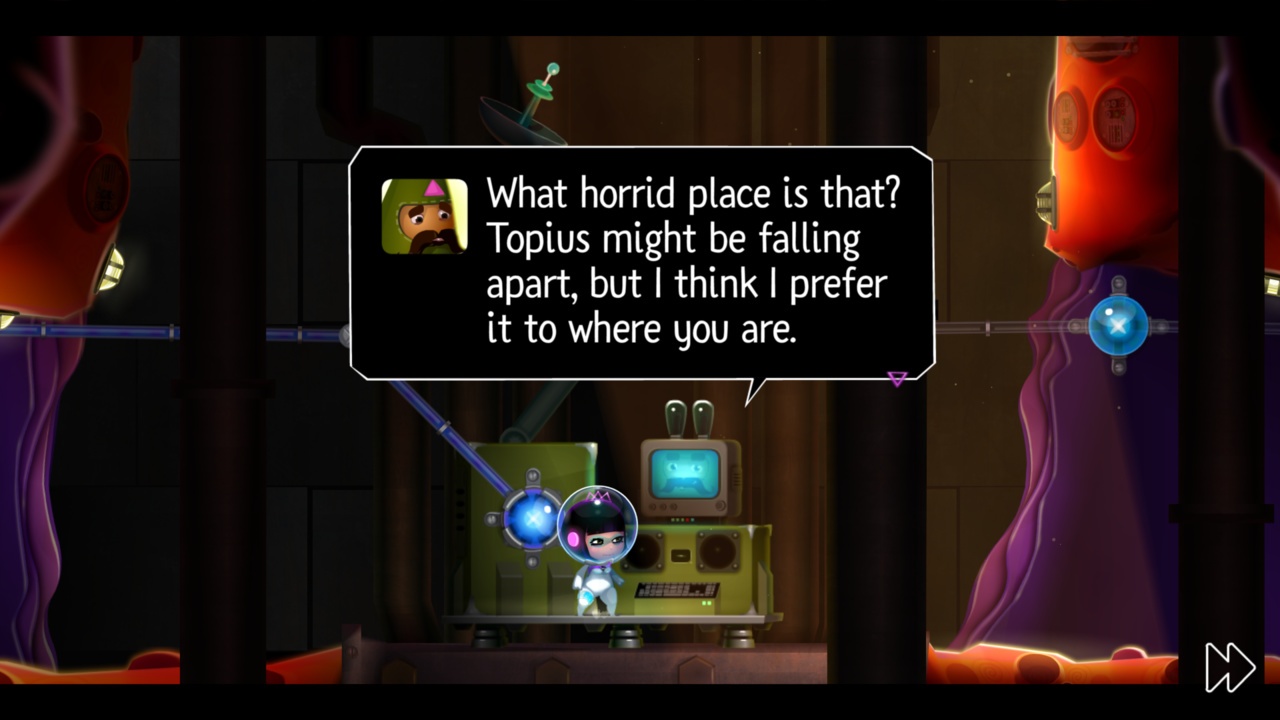 When I first heard about Sling Ming, a new title on the Nintendo Switch which has been developed and published by Good Night Brave Warrior, I immediately thought it would be a game about throwing vases from the ancient Chinese dynasties and smashing them. However, I couldn’t have been more wrong, as this charming puzzle/platformer is far from being broken.

Previously released on Steam, as well as on the android and iOS mobile platforms, Sling Ming follows the exploits a Ming, a young princess whose home planet, the earth-like Topius, is experiencing a series of earthquakes that threatens its very existence. Determined to get to the bottom of this phenomenon, Ming and her associate Iso, an elder, jump through one of the cracks to find the source of their troubles. The two of them immediately stumble upon the Oxylane, an ancient machine that was used to provide oxygen during the polluted period of the planet’s history, as well as provide a form of rapid transportation for the indigenous people who live upon Topius.

Designed as a pulley system that propels along a rail through a series of nodes, the Oxylane provides Ming with a means of traversing an underground network. Once suited up, you traverse your way along the lines by a means of selecting which nodes you wish Ming to travel to. This can be utilized using the touchscreen or the more conventional method of thumb-stick control. However, this isn’t a merely ‘on-the-rails’ type of game, sorry for the pun, as some of the nodes can be manipulated into different positions that affects the motion of the dangling Ming. 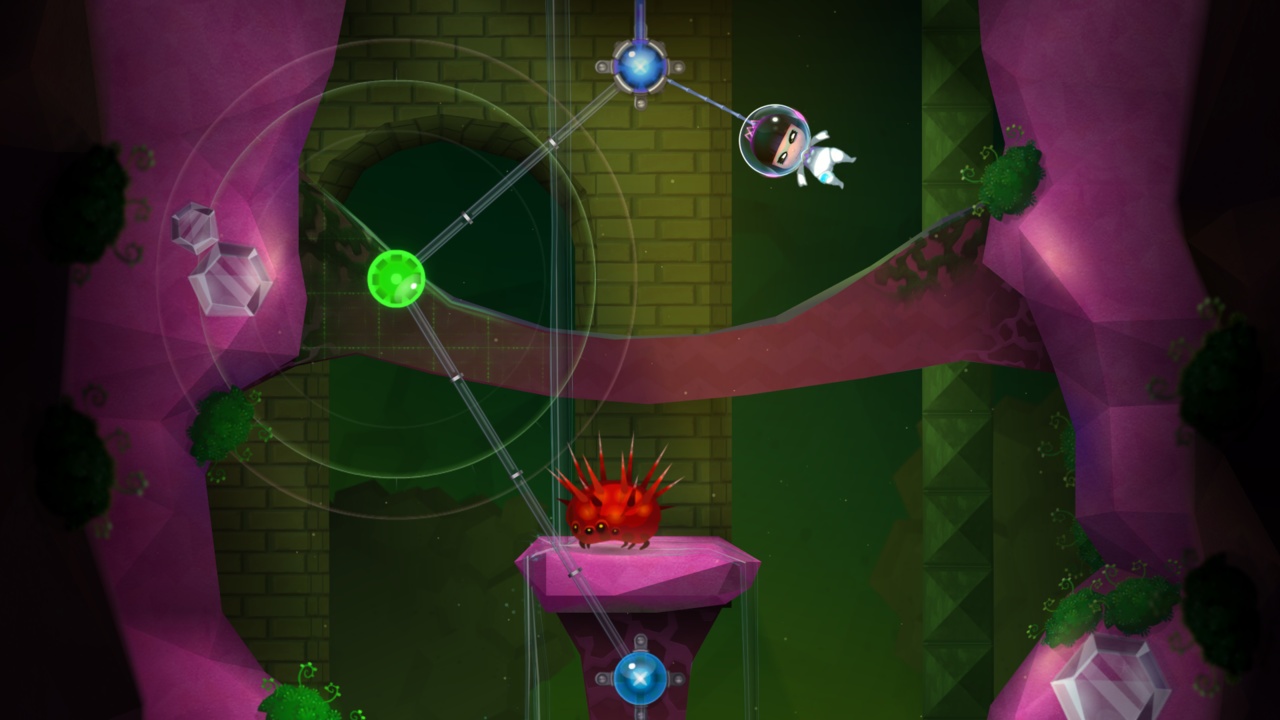 The first planet of Topius provides a suitable start to the game, with credit-filled caverns and tutorial tips to help guide you on your way. It isn’t long before you find yourself standing before a locked gateway; an ancient doorway that holds a very dark secret from the planet’s past. However, despite its bolted state, the secrets to the calamitous earthquakes lies behind its sealed doors and three keys, or crown jewels, are required to unlock its contents. Each of these stones require a characteristic from its holder in order for their powers to come to fruit; green for compassion, red for courage and blue for honesty. If the stones judge your intentions with contempt, then its holder will meet an impending doom. With Ming’s royal patronage, she is deemed the perfect soul to retrieve the lost gems. Scattered throughout the galaxy, it is now your job to travel to three distinct planets: Grandal, Hetta and Blánk. Each of these locales offer varying atmospheres that match the colour of the gems required to unlock the great door; one of a lush green foliage, one that shimmers from the heat of its lava filled landscapes and the last that shivers with its sub-zero temperatures. It’s a simple premise to the story, however, there is also a twist in its proceedings, but one that I won’t reveal as there are no spoilers here! You’ll just have to play the game to find out what it is.

Each of the planets are made up by a series of levels that you must guide Ming around, by means of using a similar system to the Oxylane that was discovered on Topius. These all work on the same mechanics of a pulley system along a series of nodes. However, there are several other factors that are introduced as you play through the game. Again, by manipulating certain nodes, you can alter the path of the rails which allows Ming to depress buttons, collect coins and traverse off the beaten track to unlock hidden paths. Despite the simplicity of its gameplay mechanics, Sling Ming offers a serious challenge. There are many factors which need to be considered as you advance through the game’s offerings. This is by no means a game you can dash through, although some levels require you to do just that, but this is a title that needs to be taken at pace, as well as a good deal of lateral thinking.

Many of the obstacles that present themselves to you, need some form of interaction, or exploration, in order to find a path around their challenge. Adjusting certain nodes, measuring the physics of Ming’s movements and adjusting speed are just some of the elements of the gameplay mechanics that need to be considered; as well as uncovering hidden areas, picking up and throwing items and interacting with the environments around you. This all adds to a surprisingly, well thought out difficulty to the game and fiendish level designs. It can border on the verges of frustration, however, the game also possesses that magic quality of a one-more-go mentality. Although many of the solutions to your problems are relatively easy to figure out, it’s how you execute them that provides the challenge; this in turn, also provides you with a feeling of not letting the game beat you, as its general mechanics comes down to your own personal skill. 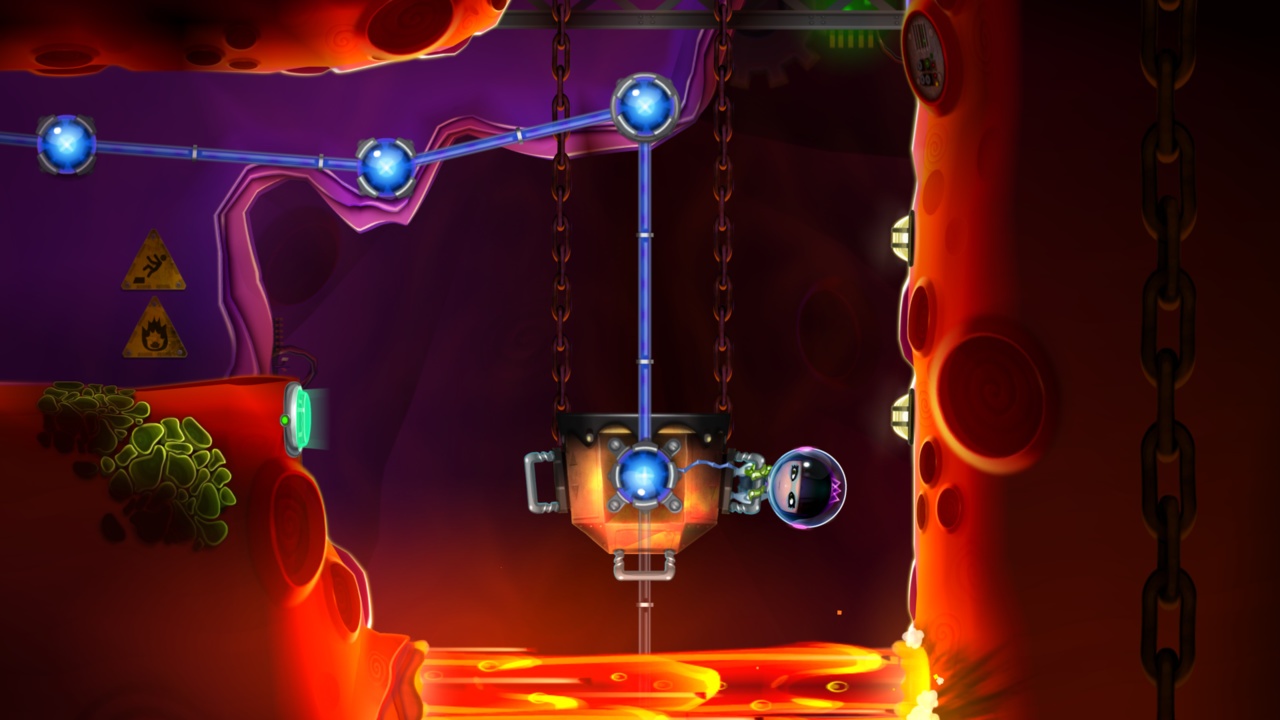 Each planet also comes with its own boss fight. These also provide a simplistic, yet very challenging aspect to the gameplay; especially with their one-hit, instant kill mechanic to Ming’s character. Their general premise usually involves the adjustment of various nodes and interaction within the level and its items, but efeating these bosses presents you with extra abilities, such as a grappling hook; items that further enhance the gameplay and challenge of the title.

The presentation of Sling Ming is top-notch throughout. From the varying settings of each planet, to the soundtrack, this is a title that simply oozes with quality; a testament to the level of commitment that the developers have poured into this game. Each of the planets have a very distinct feel to them, along with a changing musical score that matches each of the locales. Everything is bright and colourful with a good attention to detail, especially when in the switch’s handheld mode. However, when playing docked and depending on your TV, the crispness of the graphical presentation is so concise that it literally brings the game to life.

Overall, Sling Ming excels in everything it is trying to do. The uniqueness of its puzzling mechanics, level design and gameplay elements, produce a title that sits perfectly at home upon the Nintendo Switch. It may not be a game to suit everyones tastes, as its pace requires a certain amount of dexterity and thought, even creativity, in its execution. It’s a very challenging game, but never too difficult to make it a frustrating experience. However, this further adds to the longevity of the title, especially with a level count that is close to fifty; although if you find any of the levels particularly tough, you do have the option to skip it, dependant on whether you have accrued enough coins from previous levels. The game also contains a number of achievements for the perfectionists out there, something else that can add to the gameplay for some people. Performance wise, everything ran super-smooth with no hang-ups or bugs that I could find and each of the control options perform adequately well. All-in-all, this is an enjoyable title, especially if you’re a fan a puzzle games and like a challenge too. From presentation to performance, Sling Ming absolutely shines and, much like my broken Chinese vases, the developers here, have absolutely smashed it.