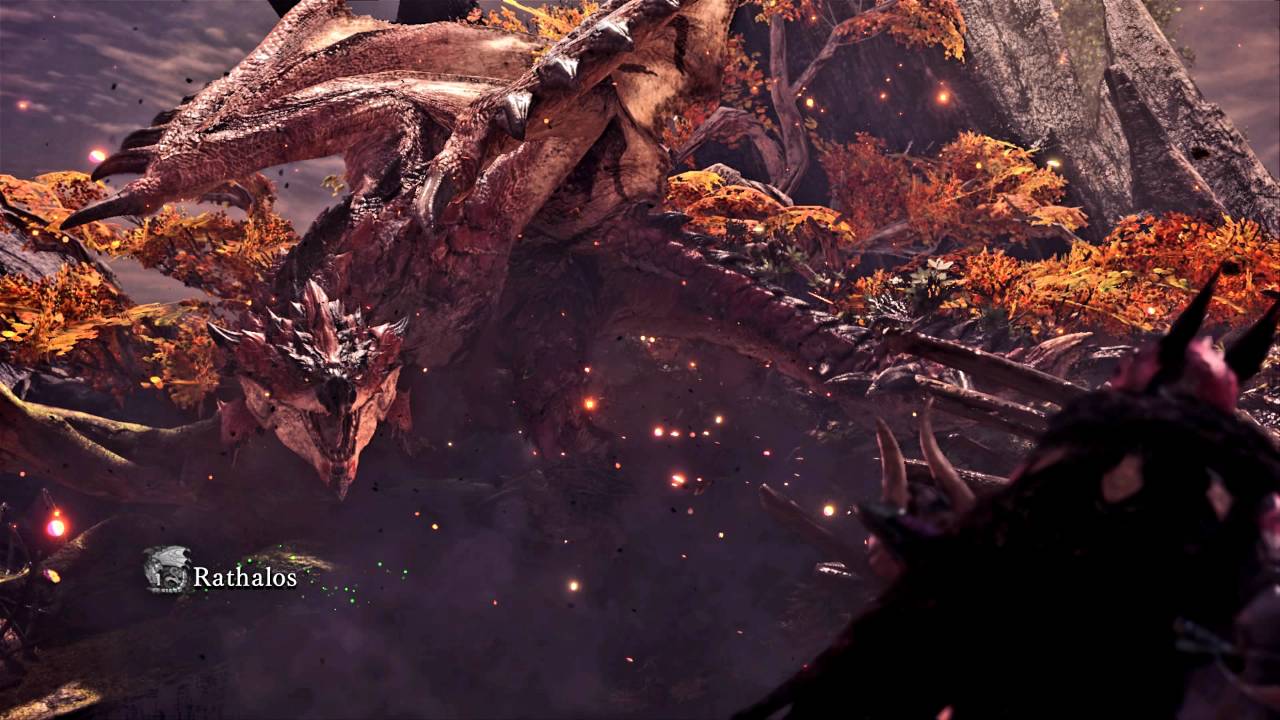 I’m almost 100 hours in and this is still a work in progress.
Just a bit about myself: I played Monster Hunter 1 and 2 way back in the day and enjoyed them, though once the games came to handhelds and the camera became an issue I stopped playing altogether. To keep my hunting skills sharp, I’ve played games inspired by Monster Hunter–God Eater, Freedom Wars, Toukiden, etc–and now that it’s made this grand return back to consoles, I was eager to jump in.
There’s just so much to Monster Hunter World that every time I think I’ve seen it all, the game introduces some new concept or tool and I’m back at square one. It’s a fantastic, evolving game that will keep you entertained for hours on end if you’re the type who enjoys falling into the routine of the hunt. The amount of information you’re given never feels overwhelming. There are fourteen types of weapons, each with their own distinctly different play styles. Base weapon materials, bone and iron, expand in later game. Upgrades are both visually appealing and change combat effectiveness, requiring money and bits and bobs harvested from the foes you’ve felled.
Monsters have weak points as well as elements they are weak to. Information regarding monsters is gathered in the wild, leaving how much you know about them entirely in your hands. Monsters come in stronger versions of themselves in late game as well as impossibly strong Tempered and Elder versions. Monster parts can be broken and severed entirely, rewarding you with bonus parts. Capturing monsters is actually more profitable than killing monsters when it comes to obtaining parts. Doing so is also often quicker than felling the beast as you’ll just need to get it near death and then have it stumble into your trap. Two tranq bombs and–voila! You have a sleeping giant at your feet.
There are a ton of different monsters to hunt, and therefore a ton of equipment sets that will not only keep you safe, but make you look fabulous while you’re fighting.
There are different tiers of armor, after you’ve made your way up the hunter ranks. These open up customization options by way of Decorations, which allow you to add skills to armour with sockets, as well as the ability to change armour pigmentation. It’s a little strange that the game waits for so long to introduce the latter, but I suppose it’s insentive to keep playing. 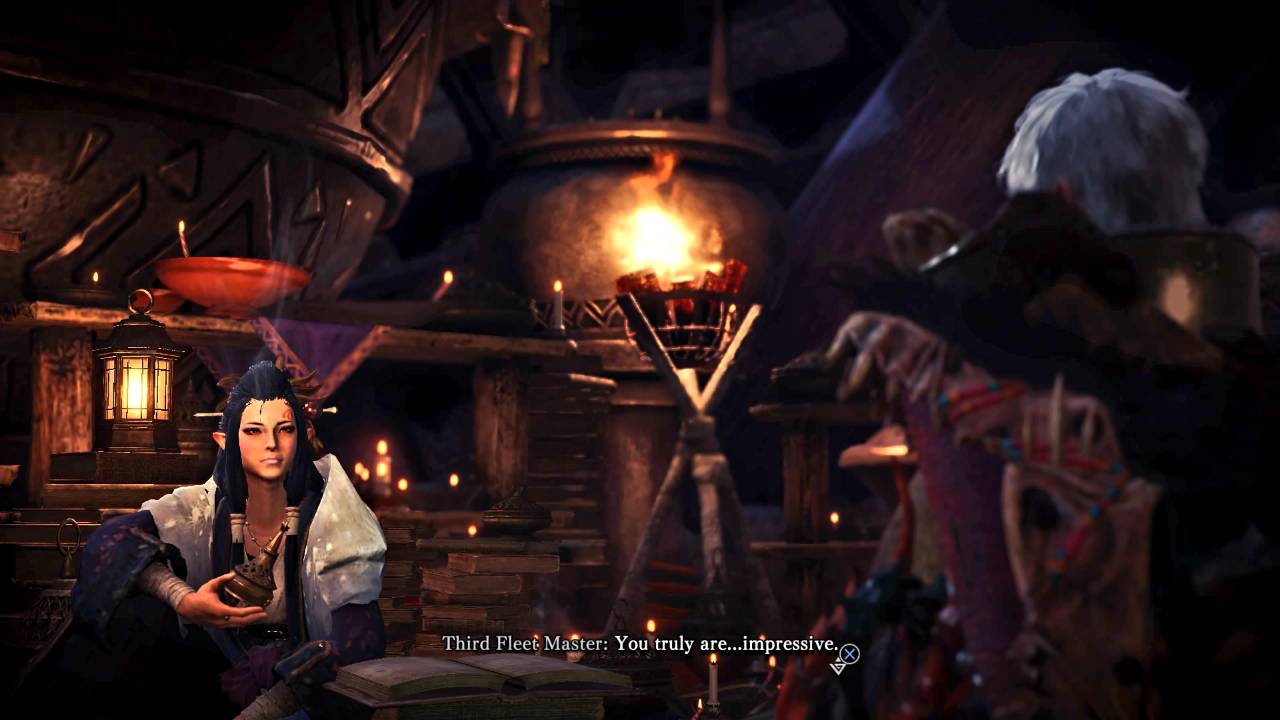 Weapons feel fantastic and are also unique. A hammer or a two-handed blade are slow and heavy, but powerful. A glaive allows incredibly mobility by allowing you to vault over enemies and also gives you control of Kinsects, bugs nurtured with different stat bonuses and elemental effects of your choosing. Lances give you power and defense with the ability to block most attacks and counter attack without fear of repercussion. Switch blades and switch axes are lightning fast and switching between forms is not only cool as hell, but gives you an extra bit of damage. The list goes on and your weaponry is only as good as your ability to bag Monsters and collect resources.

Armor gives you protection in the standard way, by providing defense and elemental resistance, but it also gives your hunter or huntress access to battle-changing skills. Synergizing armor skills to suit your weapon loadout is deep and with the addition of decorations, which allow you to socket your own skills to an armor’s open slots, the possibilities are huge. By that merit, no two armor sets are alike and wearing a hodge podge of pieces from different sets is actually encouraged. It’s fun to experiment and figure out what works best for you and as you gain access to more powerful monsters and therefore more powerful skills, you’ll notice a definite change in your combat prowess.

Just as important as your equipment is the items you take with you. These can be handcrafted both in the hub and in the field and include a host of items from healing potions to attack and defense buffers to traps that can be used to stun and eventually capture a target monster. The proper items are key for staying alive out in the field; lacking antidotes when facing a Rathian could be certain death while forsaking Cool Drinks while wandering the firey bowels of the Elder’s Recess will slowly, but surely wear down your health.

Monster difficulty scales based on whether you’re playing solo or co-op, meaning that there are two difficulties whether or not you have a full hunting party. This is an interesting way to approach it and having more people to assist you is actually a double-edged sword. Your Hunter Rank effects what missions and equipment sets are available to you, not necessarily your strength. Therefore the game relies on skill. There’s no such thing as grinding up to save for some super powerful weapon because it’s bunk if you don’t know how to wield it.
Socially speaking, I didn’t run into a particularly friendly crowd when I played. You have the option of joining a room in progress or making your own. The latter can be password protected so that it’ll be just you and your friends. When joining a room with random people I sometimes saw chat, but not often. Hunters joined, killed what they needed to, and went on their way. Playing with others is entirely optional and if you do need help, you can send up a SOS flare which will call in the cavalry. Unfortunately for lower ranking players, finding help via that method is very hit or miss, though I’ve seen people have luck matchmaking via non-PSN sources like Reddit forums. Playing with others isn’t neccesarily better as it divides the Zenny reward at the end and there’s also a penalty if your ally dies in combat. 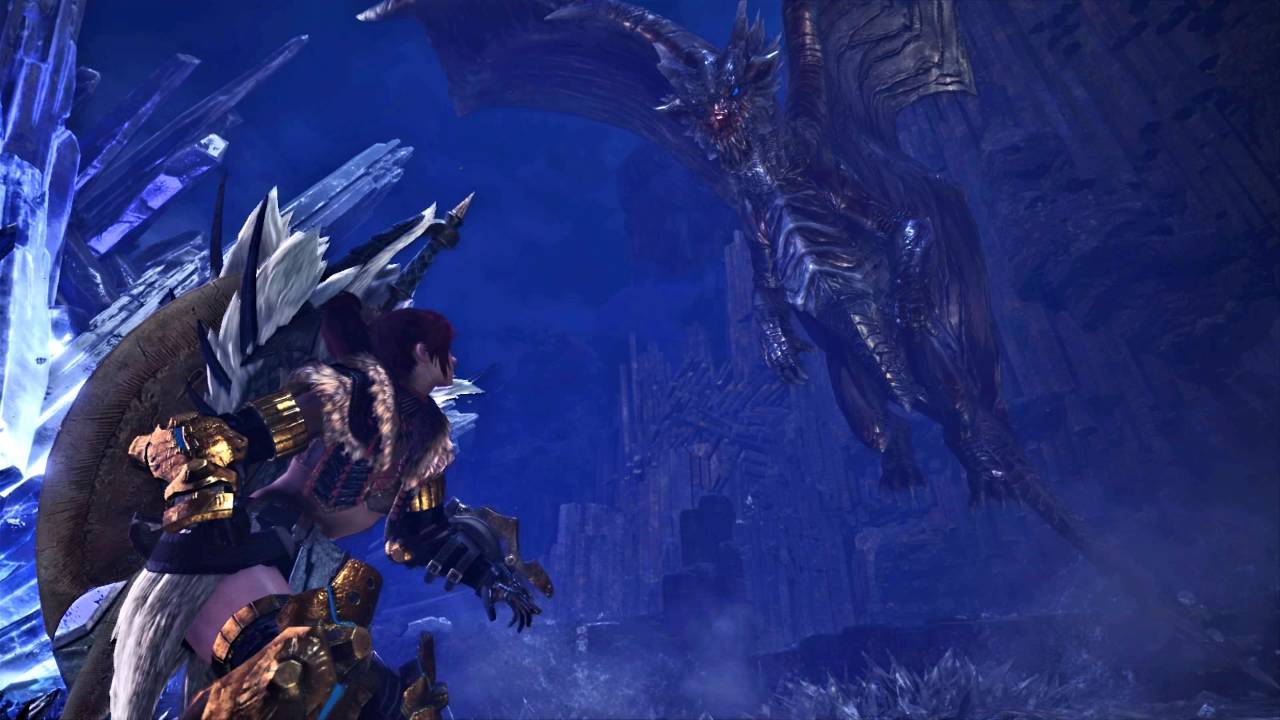 This game isn’t for everyone and I can’t stress that enough. It’s repetitive and it’s sometimes punishing, but if you’re the patient sort it can also be very rewarding. I’ve heard some newcomers complain that they couldn’t make it past the Jagras, which is the first big monster you encounter. There’s a certain playstyle the game expects you to adapt and failure to do so will lead to frustration. Overcoming a monster that I had once run from, screaming in terror, is a rush and there’s just something compelling about picking up each and every object you come across.
My main complaint about the game is perhaps the story fights against Zorah Magdaros. It’s the first Elder Dragon you’ll face and this feels less like an epic battle and more like running around with your head cut off.It’s not a good representation for the fights to come and, later, when you meet an actual Elder that is more competant at stunning you, running you down, or otherwise making you into a chew toy you’ll be taken aback. Minor complaints also include load screens, which are frequent and pretty long, and also the a few spikes in difficulty when facing particular monsters. They tend to resort to cheap shots like stun-locking, so you can easily get two-shot by certain monsters. There’s also a lack of variety in areas to hunt as you’ll just find alpha versions of the same monster in the same handful of areas.
A few things I’ve learned from my playthrough:

Hunters rejoice for Monster Hunter World offers everything you’ve come to love about the series–bigger and badder than ever. With frequent updates and events adding in even more to do, you’ll be hard pressed to put this title down for the 100+ hours it demands. For those who are new to the series, this may not be the best entry point, but it’s definitely one that you should try at least once. The sheer amount of content will stagger you and though 2018 is a year full of great titles, I’ll still be visiting this one all year long. If you’re on the fence, buy this. If you’re a fan of the series, buy this. If you’re looking to take up the hunter’s mantle, but aren’t sure how, buy this.