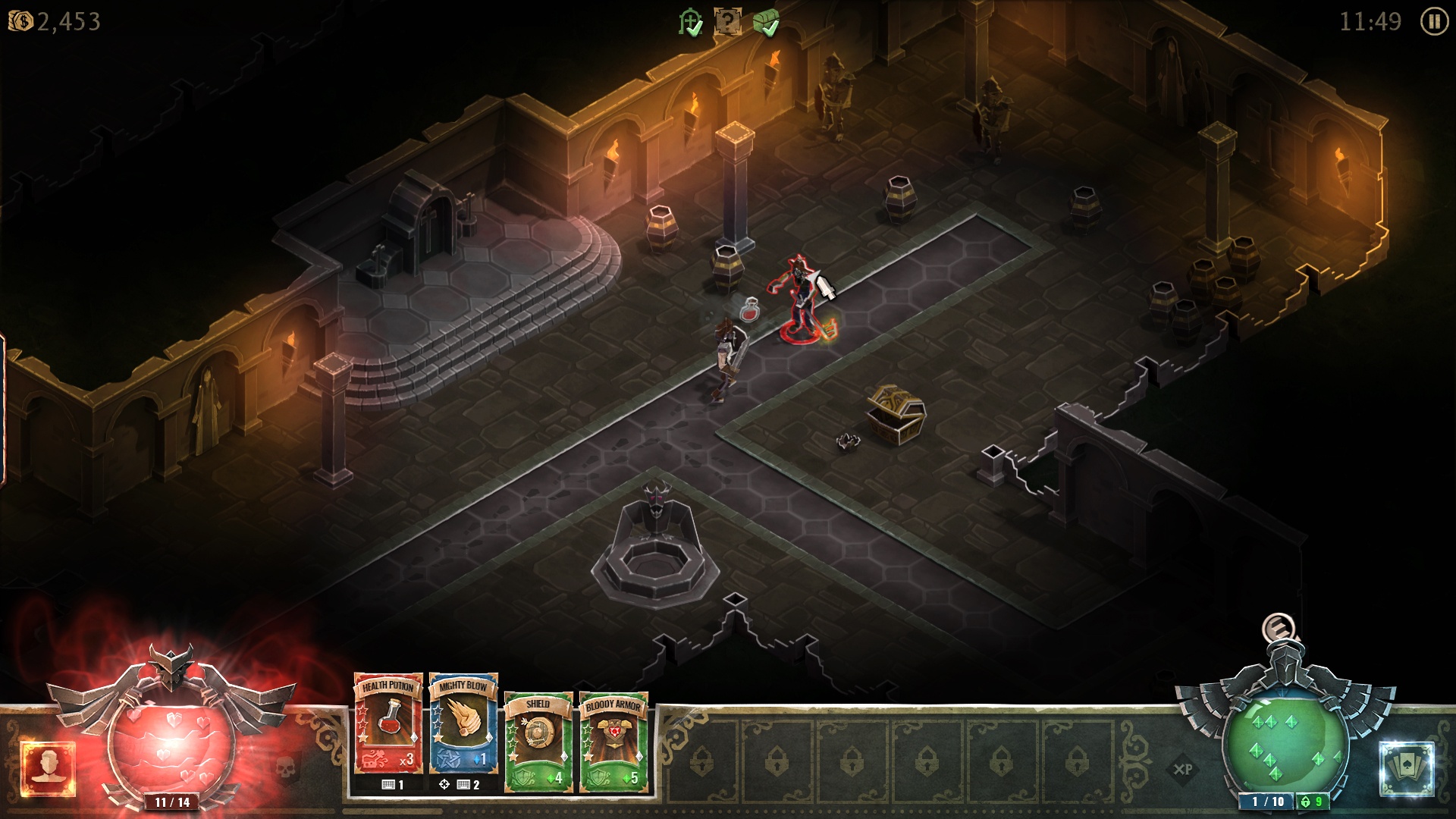 You are an adventurer returned from many years of journey. You discover your old hometown practically deserted and rundown. Something evil is afoot in the town cathedral and you alone are equip to get to the bottom of it.

Book of Demons is a hack-n-slash with simple, straightforward gameplay. As your hero explores the dungeon he can only stay on a set path. There will be crossroads scattered throughout, but you are restricted to walking on a path that runs through the middle of each room. There is a wide range of monsters and bosses in the game that you discover slowly as you go deeper and deeper into the dungeon. To fight the monsters that populate these dungeons, you click on them. Click once, and you will do a slow auto attack until you click away, however if you click repeatedly or hold down, you do a faster attack. Some monsters have shields which you have to click on multiple times in order to destroy before you can damage that creature. When gold is dropped, you collect it by moving your mouse of it. 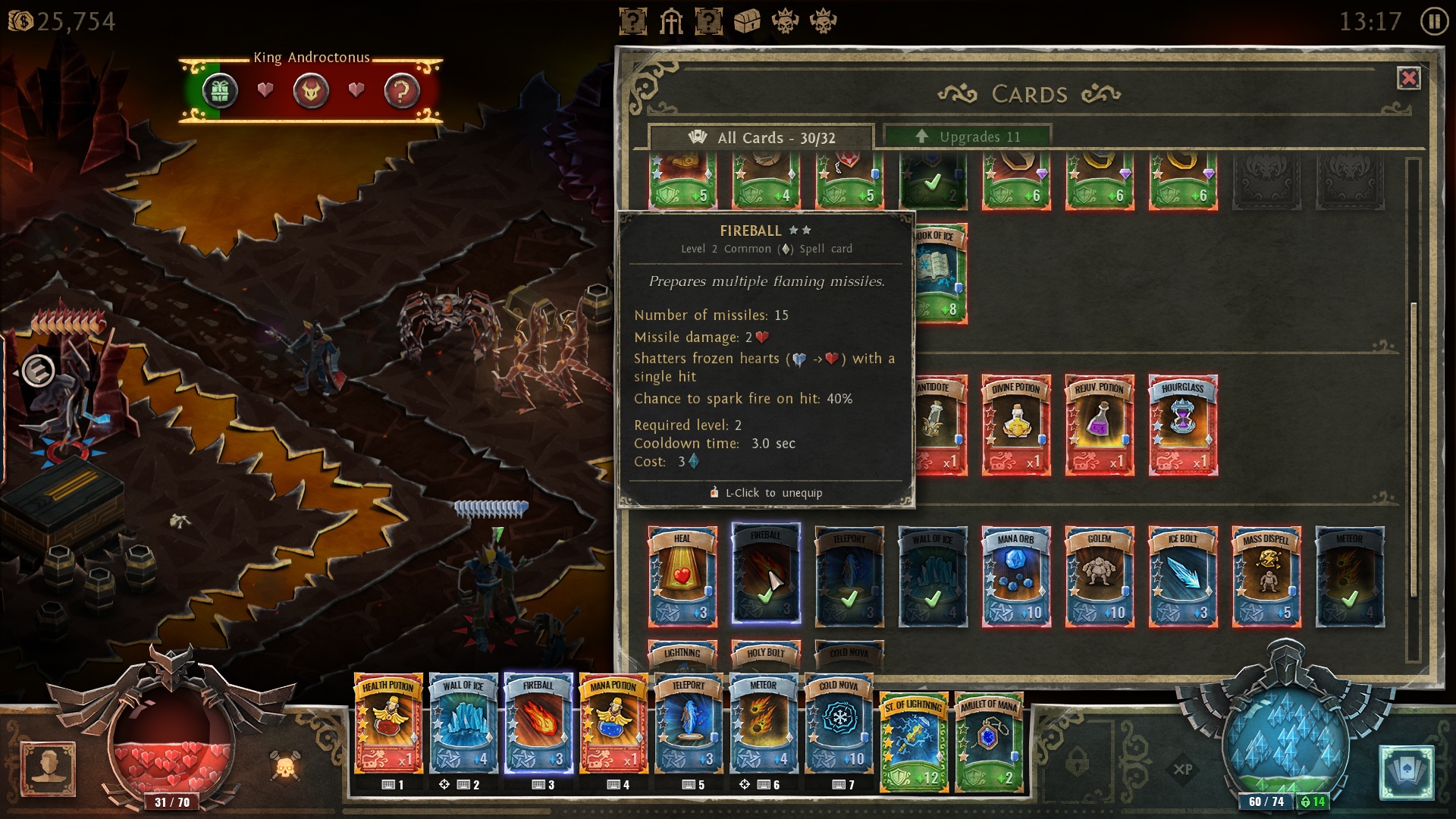 This combat is quite simple, but the customization that evolves slowly over time ads spice to it. You collect cards during your adventuring. These can range from equipment to spells you can use in combat. You have a limited number of active card slots (though you can pay one of the townsfolk to unlock more) so you must choose which cards you want to have active and be usable during battle at any time. Some equipment will also take up a certain amount of mana by wearing it, while others, such as health potions, can be refilled in town for a price. These cards let you really customize your character, particularly at high levels as you gain more and more cards. You can switch these cards out during battle, and while time slows down it doesn’t stop completely, meaning there is still a sense of urgency but you can also adapt as the situation dictates.

The levels themselves have a great deal of replayability as they are procedurally generated. In fact, before each section of dungeon, you get to choose how long a quest you want to go on (Five minutes? Twenty minutes? Half an hour?). The game keeps track of how long a level typically takes you and will estimate a dungeon length for you.  This is a fantastic feature, quite clever and one of the game’s greatest strengths. You can play exactly as long as you have time for and no more!

There are several other nice additional features in the game such as full voice work for all the characters in town, and footsteps in the dungeon that show where you’ve been and turn gold once you have completely explored everything down that path. 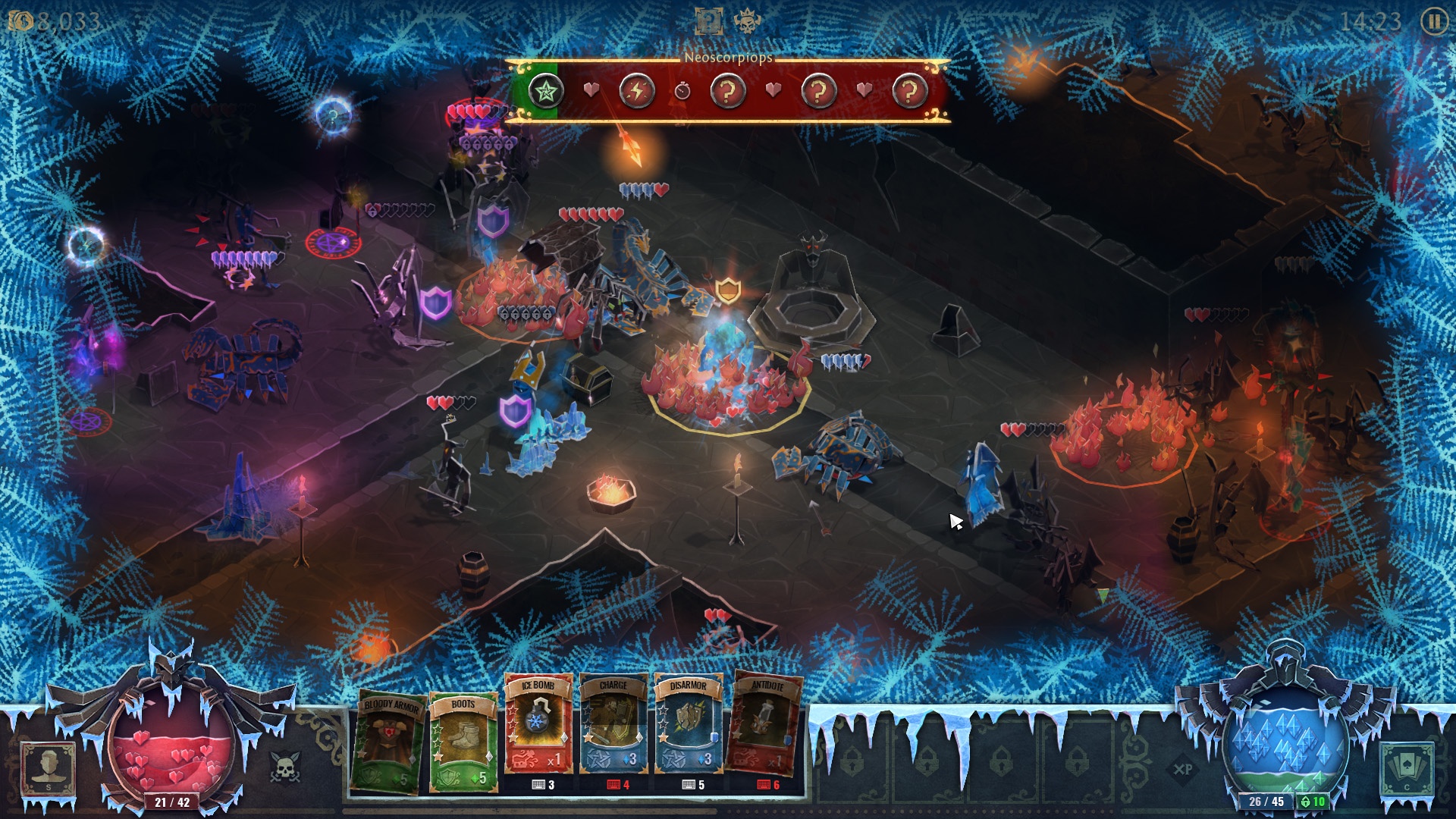 Book of Demons is in early access. The game itself feels quite polished but there are still the occasional bugs. For instance during the opening cinematic, the same subtitle kept playing on repeat for me. None of the bugs I encountered were game breaking, but they were present.

Your hero’s town also lacks much personality and there’s little really to draw you to the townsfolk themselves. There’s some occasional clever dialog, and the voice acting is solid, but you don’t really come away caring about any of the characters.

Book of Demons is a fresh take on hack-n-slash, with a great equipment/card system. It’s slick, smooth, and easy to get into. It looks attractive and its randomization means the game has a lot of replayability.