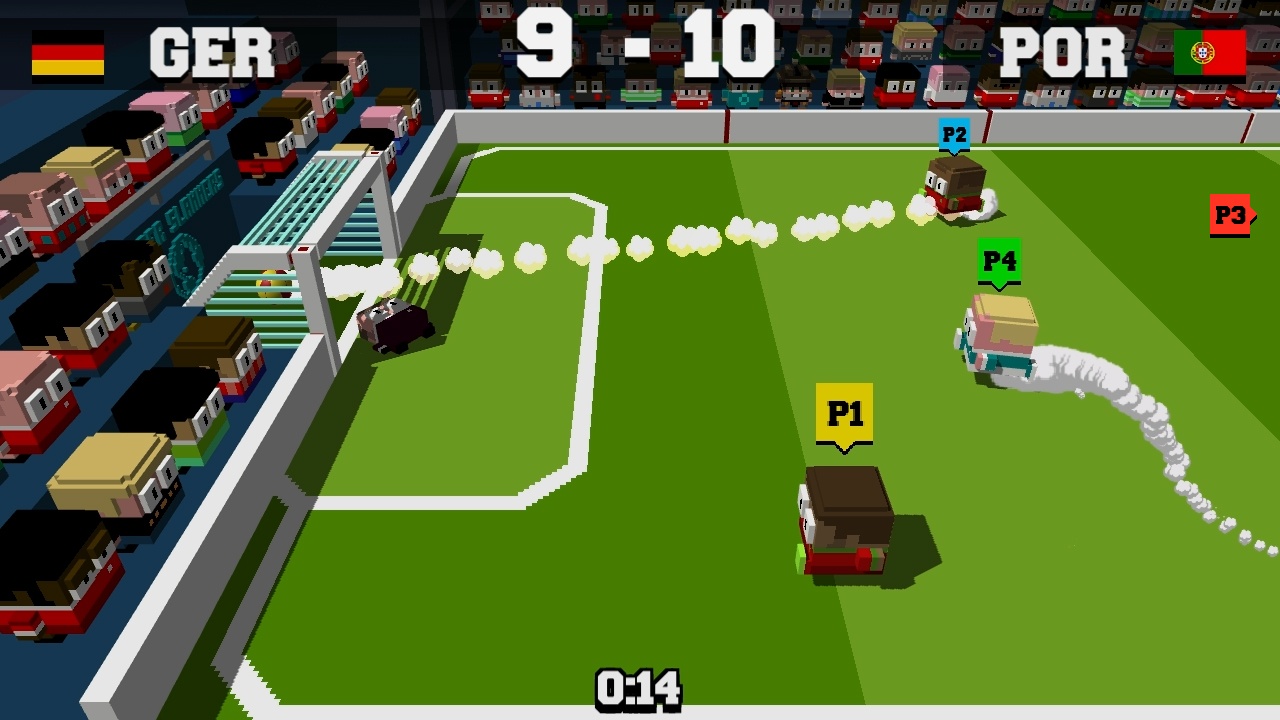 With the 2018 World Cup in Russia now in full swing, so is the influx of footy-inspired software onto our beloved consoles; especially upon the Nintendo Switch. EA have added the tournament to Fifa 18, giving fans a simulation of the event; arcade fans have been given a dose of Legendary Eleven for a quick kick around and tech-heads have the joys of Football Manager Touch 2018 to get their teeth into; much like Uruguay’s Saurez. The latest title to try to take advantage of the football frenzy around the world, comes in the form of Atooi’s Soccer Slammers, a fast-paced, arcade-style take on the sport; but one that doesn’t necessarily follow all of the rules, both in terms of footballing prowess and in the gameplay of video games.

The game presents you with two modes of play, Quick Game and World Cup. The first presents a two-minute match with two teams of your choice; essentially a warm-up mode for the main event or a quick five-minute kick around when time allows. The latter presents the full event of the World Cup, with thirty-two teams competing in group stages, knock out phases and finals. Either mode can be played solo or with up to four friends on local multiplayer; although you’ll need four joy-cons to fully utilize this option.

Matches are played within the confines of a small pitch with each team represented by two outfield players and a goalie; so basically a 2v2 mechanic. A limited array of moves are mapped to just passing, shooting, tackling and sprinting. However, due to the style of Soccer Slammer’s gameplay, one or two of these moves largely become quite redundant in their execution; something I’ll cover in more detail shortly. Much like an ice hockey rink, or even an air hockey table, the pitch upon where you play matches have walled-in sides, meaning that the ball is constantly in play, creating a frenetic pace to each of the games. There’s no stoppages for throw-ins or corners, even fouls for that matter, as the ball blisters around the pitch in charged shots and rebounded rockets. 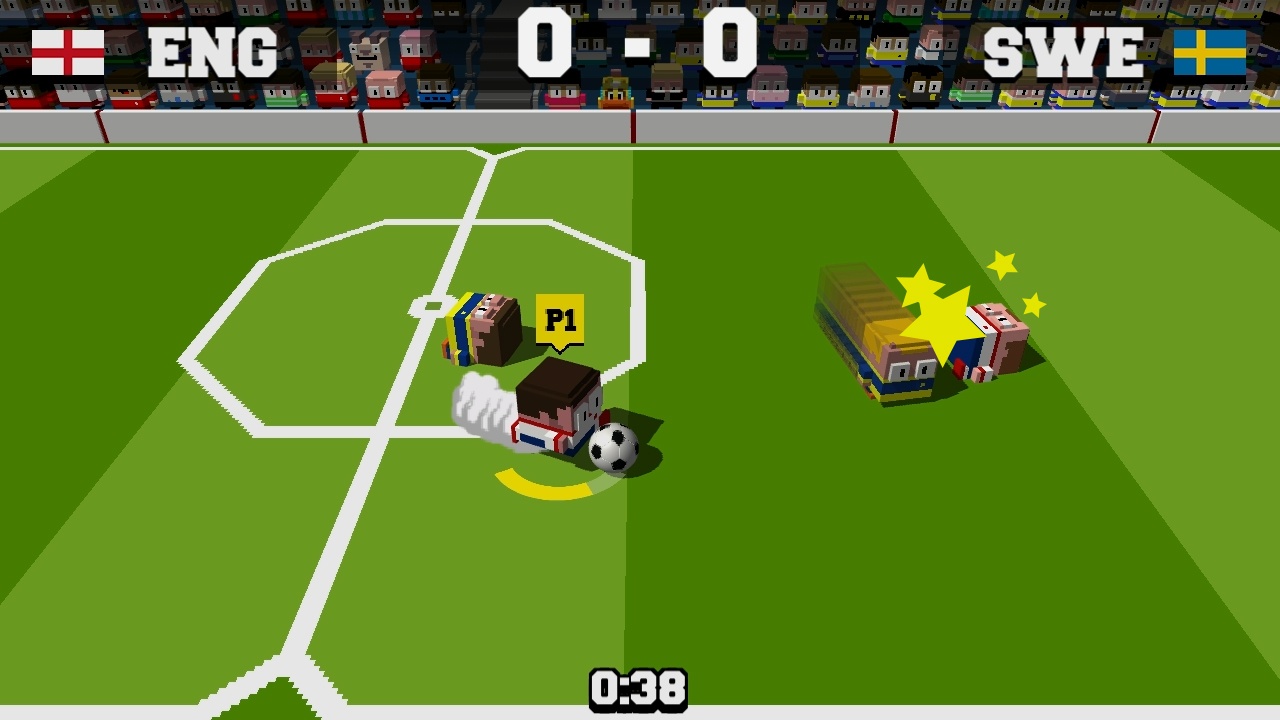 This style of gameplay produces a fast-paced game, but also one that requires very little tactical play or skill;in my opinion, two of the most important factors in producing a good game of footie. To put it in simple terms, this is game that works on the premise of slide, shoot and sprint and that’s it; spend any time on the ball and you’ll succumb to a crunching tackle that gifts it to the opposition. Instead of looking for breaks or openings, or even a killer pass, you simply have to slide into the player who has possession, kick the ball somewhere and hope that it rebounds into the net and run after the loose ball if it fails to find its target.

It isn’t really a recipe for a satisfying game of football. Yes, it is incredibly fast-paced, but in reality, this just adds to the random elements that the gameplay produces as you spend your time simply hoping for the best. Matters aren’t really helped by the mechanic of only having control of one player, with your team-mates being controlled by AI. This can lead to some frustrations, as the camera pans along the length of the pitch, depending on the position of the ball, often leaving you off-screen and unable to position yourself in a defensive stance of good effect. Instead, you find yourself most of the time, just running after dead balls, sliding in hopeful tackles and shooting blindly as you try to tally more goals that your opposition. 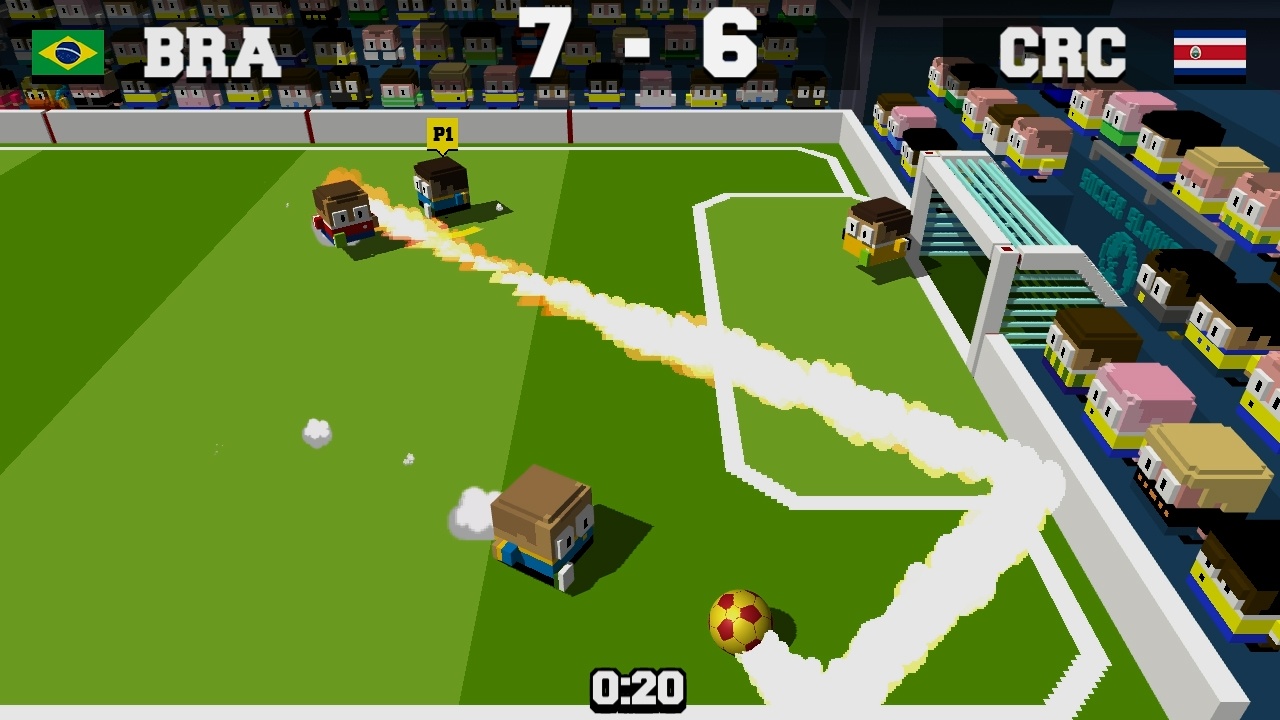 As a result of this mechanic, turnovers are extremely high; often with games that can produce goal tallies that run in double figures. Shooting can be charged to produce more powerful shots. However, without the luxury of time, this also opens you up to falling foul of the constant tackling; thus losing possession. There’s no potential here for a passing game either, meaning that the tactical depths often associated with the sport are completely redundant. Everything just feels heavily automated with your controlled player wandering aimlessly around the pitch. The best, and in my opinion, the only tactic you can play is to lay deep in defence and hope that your sliding tackle connects and boot the ball in a direction that is opposite to your goal in the hope that you score, or your computer-controlled team-mate latches onto the loose ball.

It all adds to produce a game that feels as far away from football as could possibly be. Creating a game that focussed around a hockey-style sport would have been a more successful formula here. Its only saving grace, comes in the form of its multiplayer elements, allowing you to play matches of two friends versus two friends, or a couple of you controlling a team through the competition of the world cup. The hectic pace of the game can produce some fun moments when playing with other human team-mates or opponents. However, the overall mechanics of the gameplay remains the same, and soon becomes a tiresome experience.

Overall, Soccer Slammers soon becomes a five-minute wonder with its less-than-engaging mechanics of playstyle, serious lack of any depth, in both its options and gameplay and in being a game that contains a distant connection to the game of football. Although its presentation, in both atmosphere and graphical representations, are bright, clear and attractive; its core mechanics of gameplay is plain scrappy, producing an experience that is neither exciting or engaging; especially when taking its long-term appeal into consideration. For a quick kick-around, then it will satisfy that hunger, but for a more immersive experience, or just a plain old-fashioned game of football, then this is a title that will ultimately disappoint. This may be a game that shoots, but it certainly isn’t one that scores.