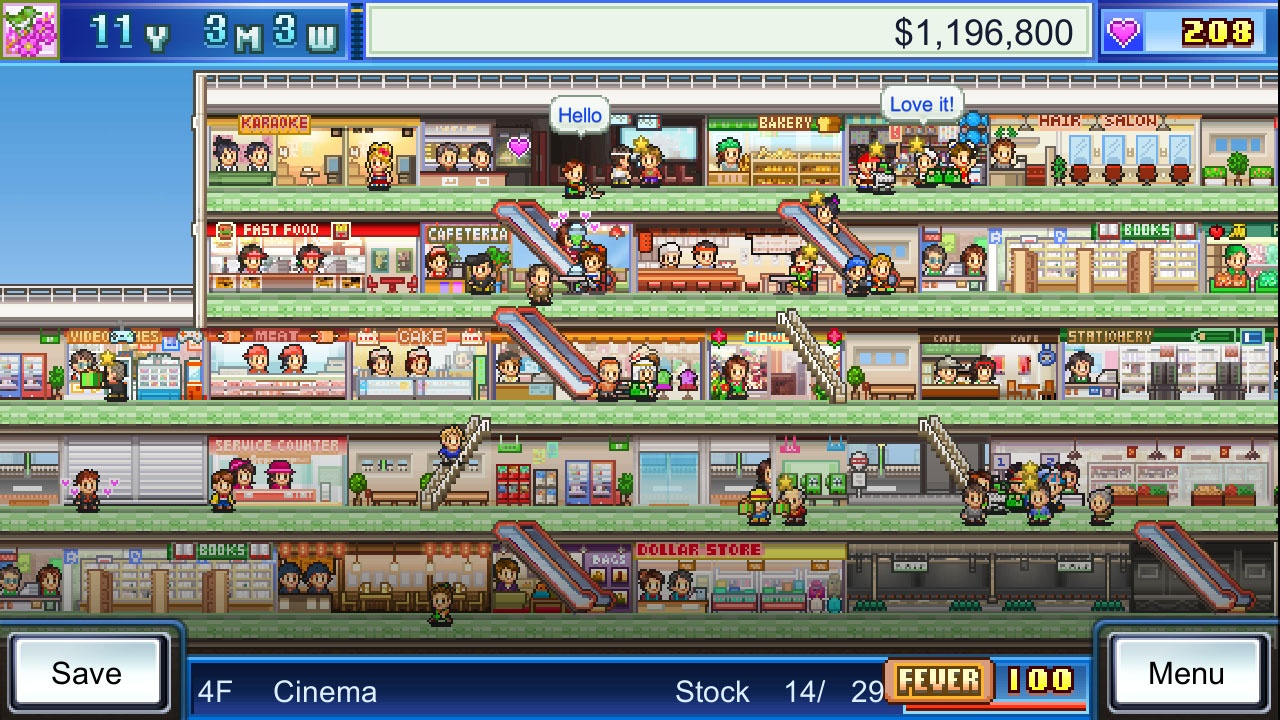 Mega Mall Story was initially released on August 9th, 2011 for IOS developed by Kairosoft games. Coming from someone who has played the phone version, I can say I was happy see the game was also being made for the Nintendo Switch.  The Kairosoft games usually follow a pattern with all their games. You own either your own village, town or business and your main goal is to earn money and expand your place to be one of the best. By the end of every month you will be judged against other places to see who the best is. Mega Mall Story is no exception to this rule. How does it stand compared to Kairosoft’s other games though?

Being transferred on the Nintendo Switch, I could already tell the improvements Mega Mall Story has gone through. On the IOS version of the game, I would find myself going through lag way more often than I should be, especially when playing on an android device. Sorry Google.  On the Switch everything just seems so much smoother. Even the customers who are just cute little pixelated people look so clean. Seeing this game up on a TV instead of a small phone or tablet is one of its biggest qualities. The controls are simple and easy to use. If you want to play the traditional way Mega Mall Story was played, then the game also allows touchscreen support. 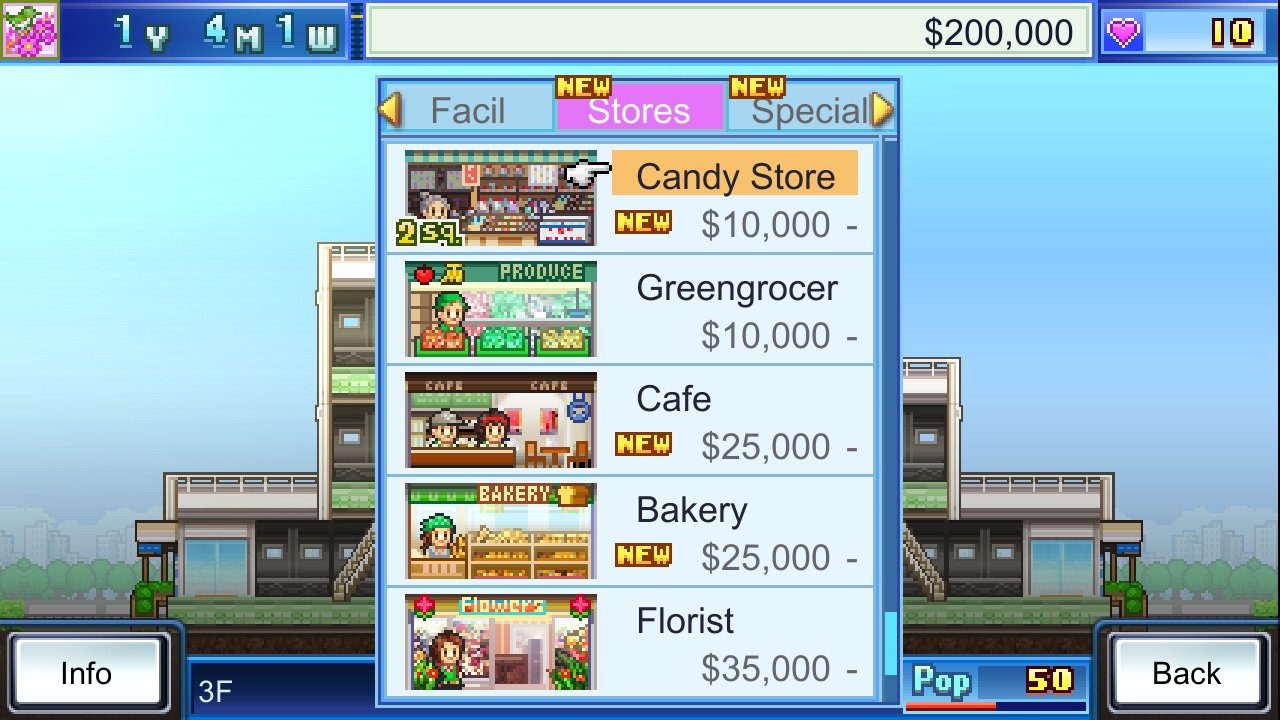 Mega Mall Story’s only goal is what it seems, have one of the best malls around and try to reach a five-star rating. There are various techniques and methods to reach this long-term goal. One concept I loved in this game was having regulars. To earn a regular in your mall, you need to satisfy your customers needs such as building their favorite store and keeping it under high maintenance. Regulars are a great way to earn money because they will come to your mall and spend a greater sum of money, more often than all of the other customers. Regulars also play a key role in gaining hearts. Hearts are used for upgrading stores and researching new ones to place into your store.

Another element in the game is popularity. Once your popularity meter reaches 100 you activate fever mode, which sends a huge wave of customers buying anything they can get their hands on. It’s an excellent way to receive money and hearts.  Combos, which can be purchased with hearts, are strategic plans that helps you build perfect sections in your mall. For example, a kids combo would look something like a candy store built next to a toy dispenser and a toy store. 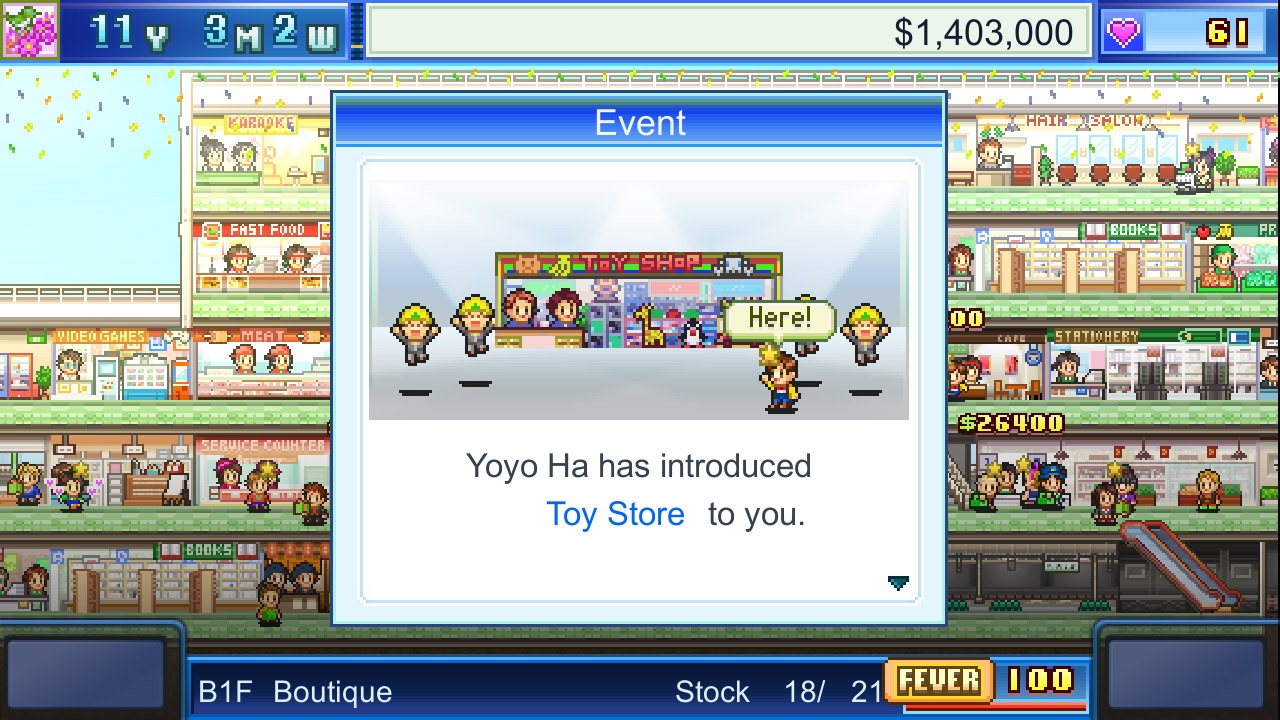 In order for the game to have a more realistic feel to it, a weather and economy feature was included. On dark and rainy days customers are more reluctant to come into your store and if the economy isn’t doing so great you will barely make any money at all that day. Both of these play a huge factor especially when you have to pay the maintenance cost of the whole mall. If you don’t have enough money to pay that, you get put into debt which leads to shutting the mall down permanently, resulting in a game over.

Mega Mall Story is just what it seems like. A sweet cute simulator game that can serve as a stress reliever. Its satisfying seeing all the money your mall is earning. Once you become a five-star mall and unlock every store, then replay-ability drops significantly and there really no reasons to keep coming back to the game, but until then it was a lot of fun while it lasted. For 12 dollars on the Nintendo Eshop, this game is worth it. This game left me with anticipation for all the other games Kairosoft can potentially transfer over. I’ll be keeping my fingers crossed for Dungeon Village and Dream House Days.