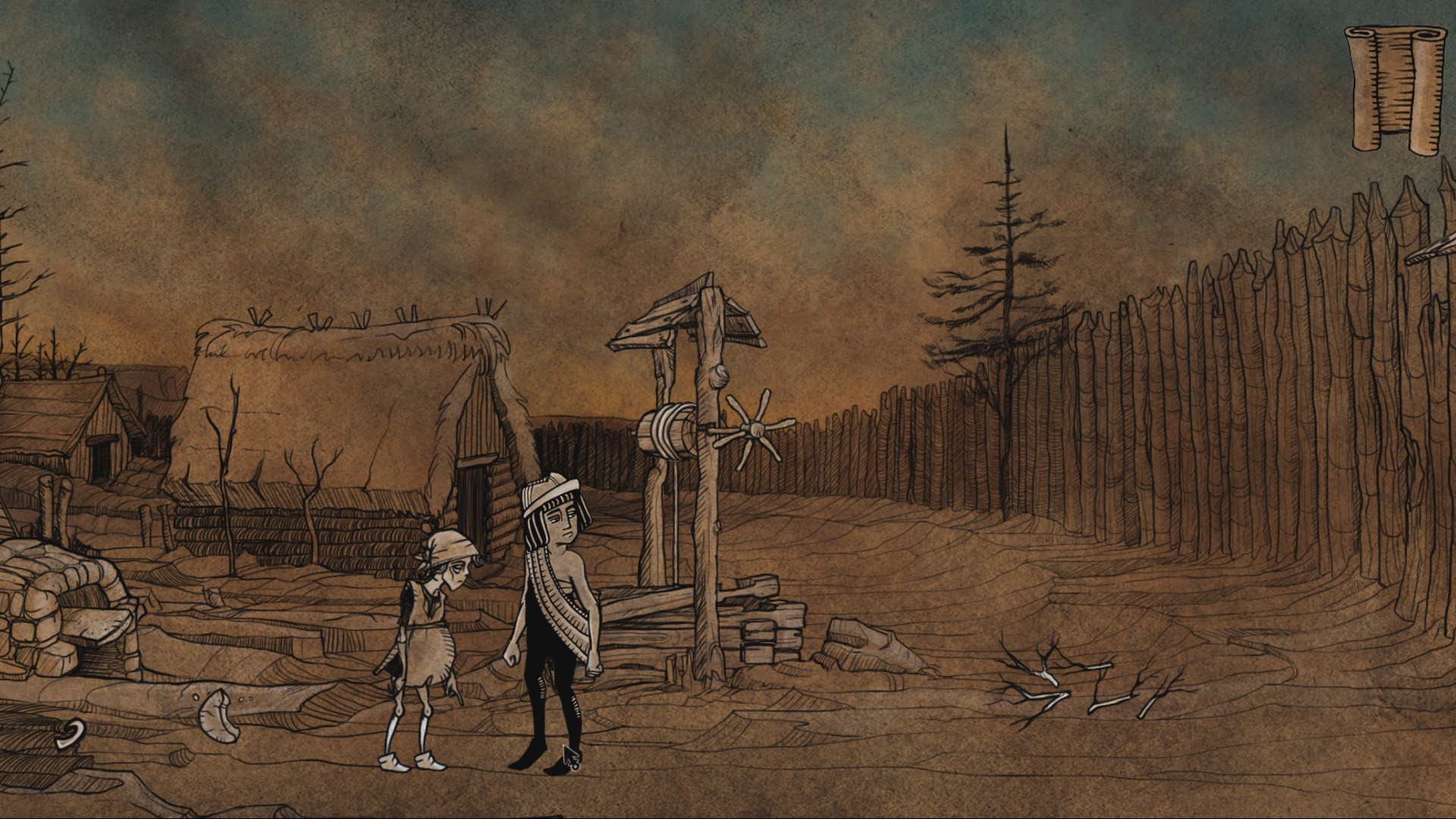 Apocalipsis is a point and click adventure game developed by Punch Punk Games. The moment that you load the game you feel the influence of the Brothers Grimm fairy tales, from the sepia style art, to the dark voice over that narrates the tale through each of the cut scenes. You are welcomed into the world with an image of Harry the main character removing a “witch” from her watery death. This dark and melancholy mood encompasses the theme of the title.

The developers successfully had me feeling uncomfortable throughout my time in the world they had created. From the eerie music, to the death inspired images that litter the environment. As each stage was unveiled I was left wondering what strange and marvellous wonders I would witness. My favourite was the Torso guardian, who strolled around protecting his prisoners whilst living happily without a head.

A puzzle game that wasn’t particularly adventurous in its style. Most of the challenges were easy to solve, and were quite repetitive in their approach. Point the cursor around the screen, pick up all the items and place them to solve the issue. Unfortunately for many of the trials, a limited thought process was required. For me, the greatest challenge was faced when trying to identify the symbol puzzles, even this left little to the imagination, and they were easily solved. So what is a puzzle game without challenging puzzles? In this case, it’s a reasonably enjoyable trip inspired by 15th century carvings.

Throughout the death and doom that Apoclipsis portrays it is ultimately a tale of love and romance, Harry the lead character wants to be reunited with his one true love. The details of death and the horrors that are shown are reminiscent of the images that the artists of the 15th century created, for them the images showed the struggle of everyday life. With the horrors of disease and death an everyday occurrence the only positives they had to inspire them were; family, friendship, romance and love. Punch Punk Games planted both the positives and the negatives into every element of their game. 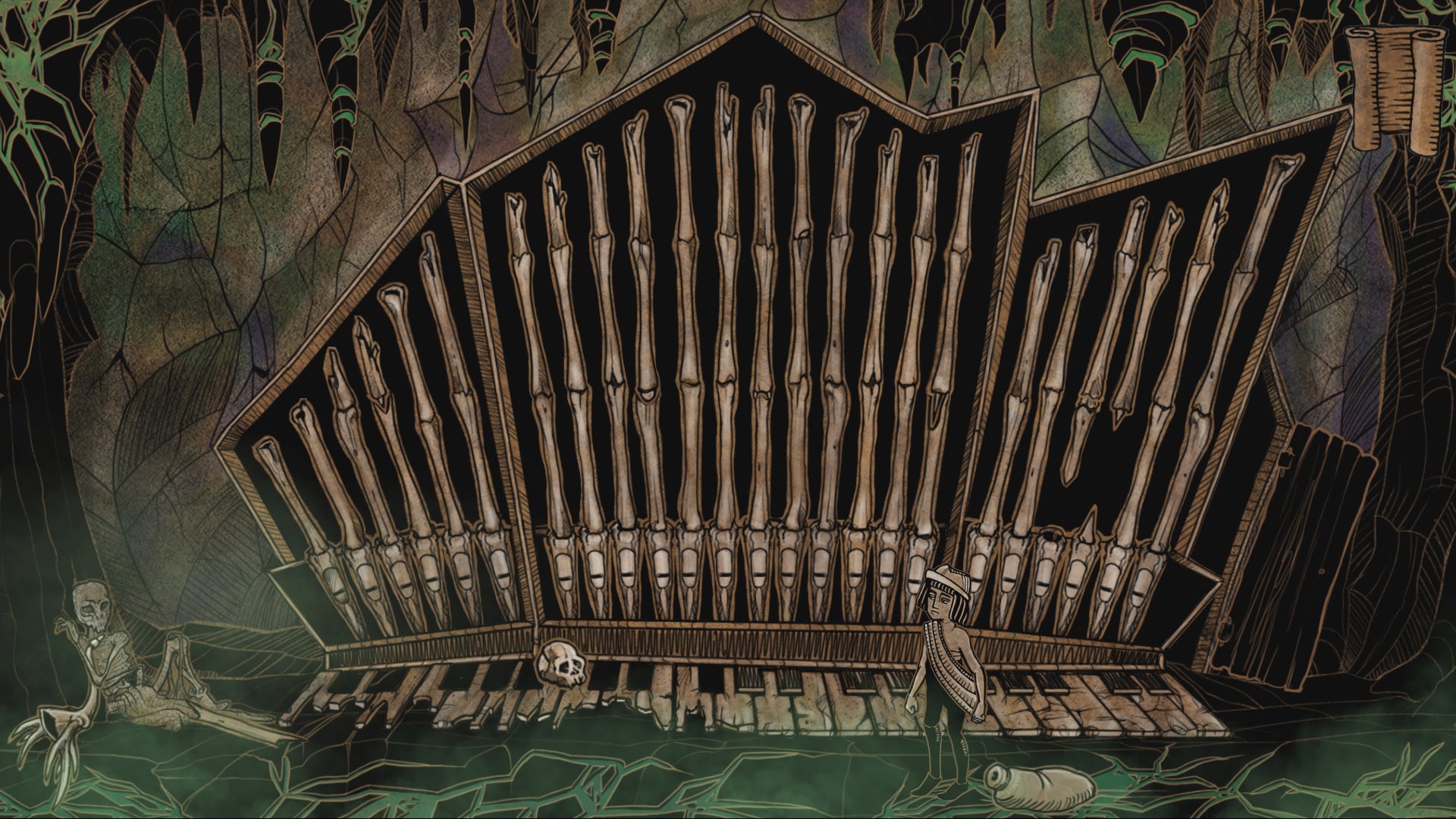 A game which at the point of me playing was broken down into three chapters; Harry at the End of the World, The tree of Knowledge and One night in the woods. The later 2 chapters are additional DLC and add a small amount of detail to the game. The main chapter plays out at a speed which matches the mood, slow and thoughtful. Though the pace captures the mood perfectly, it had moments of mind numbing boredom. The main protagonists speed makes pensioners look like Usain Bolt. I felt for most of the game that I wanted the pace to increase, if the title had been any longer than the 2 to 3 hour mark I’m sure I would have shelved the game.

I did enjoy how the developers ensured that each section was clear, and the cut scenes moved the story forward. Every section had obvious defined elements for success, and all items that could be interacted with being key to the game moving onwards. This chapter by chapter approach reflected the games fairy tale approach. It played out as if being told from a rather dark kids story book.

Graphically the game takes a very simple approach, both with its artistic design and colour palette implemented. The use of striking lines within the animation show reference to the 15th century carvings this was then emphasised with the sepia approach. The images of death and destruction reinforce the believe that people in the 1400s were driven by a religious and supernatural belief. Fear, torture and death being the underlying tones. Birds appearing from serpents’ mouths, naked and bounded prisoners being tortured, and a Kraken sinking a ship. These are but a few of the images that greets you on your journey.

The audio next to the visuals really are the winners in this game. The only speech that is heard throughout the game is the cut scene narrative, voiced over by Adam Darski. The Polish artist really brings a Brothers Grimm flair to his role. The dark and disturbing music is ever present. The audio does well to distract you from the slow and arduous elements of the gameplay, and for me at least made me feel on edge throughout each scene. 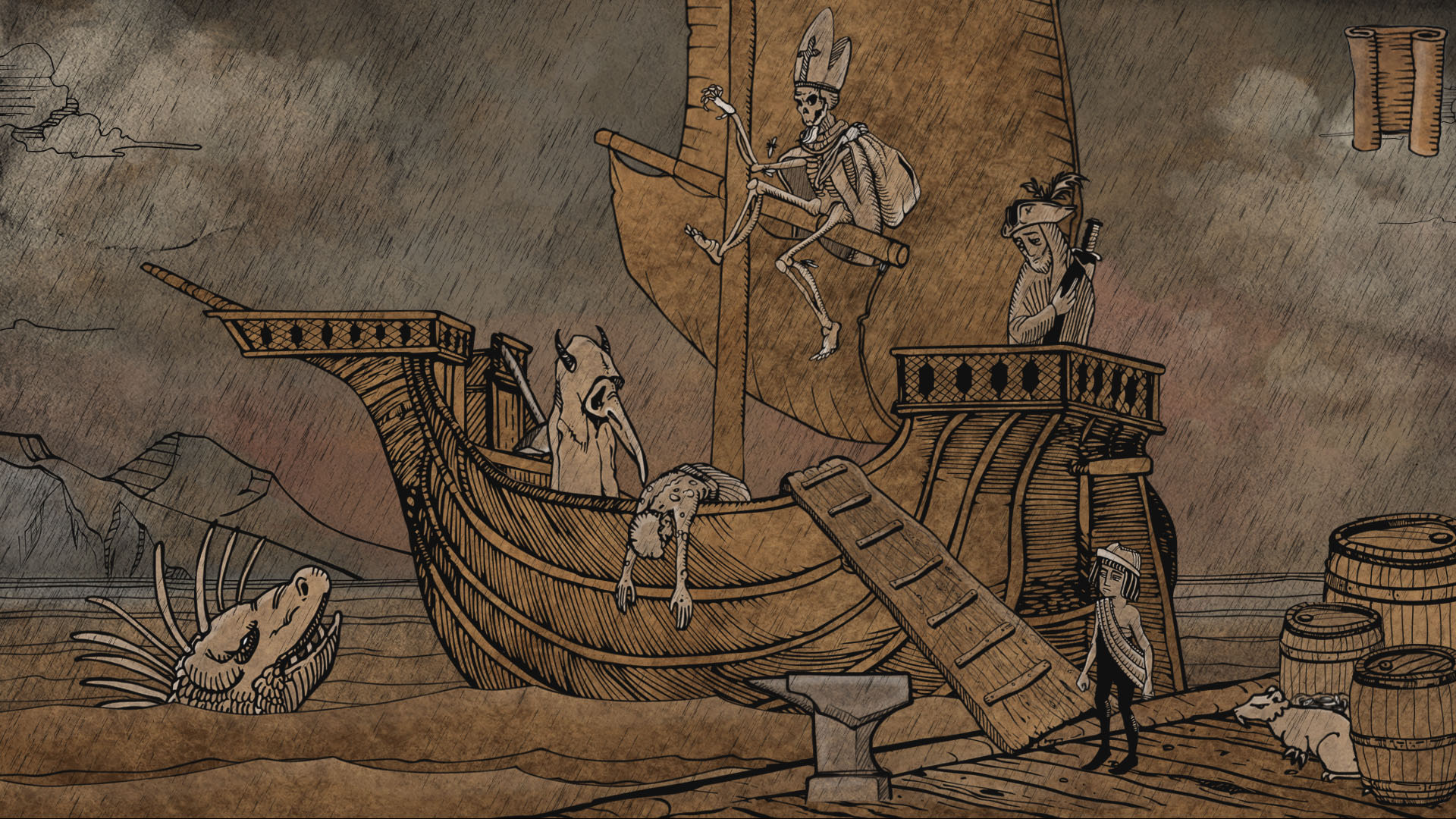 The control system is easy to utilise. You are given an on screen cursor that is controlled using the left analog stick, this makes navigating the world and using the key items extremely user friendly. To make the it even easier Punch Punk Games allowed for a visual clue when items were needed to be used to complete the task at hand. If you ever get stuck with a puzzle you were just able to spam the use button, and eventually you would be presented with the required item to solve the puzzle you were stuck on. For a PC port the controls do work well on a console controller, and anyone whose worry is a clunky UI, then believe me, you have very little to worry about.

With the game being so short, I’m sure this will inspire the many achievement hunters out there to give it a go. The ease at which you unlock your rewards will not trouble anyone, a few of the challenges will require a second run if unlucky, but most will be popped at the first attempt. If you want to achieve the perfect score you will be required to complete all the DLC also, though in my experience this took no more than 20 minutes.

A game that on first inspection screamed out for me to try it; the idea of the dark story, the clear and distinctive art style, the point and click puzzle adventure and finally the reasonably short playthough time. Oh, how I was left feeling disappointed. This isn’t to say that the game is bad, oh no that wouldn’t be fair. I just expected more from the experience. A puzzle game that has clearly been limited to allow for more players to enjoy the title. I’m all for inclusion, but not at the cost of the key elements of the game. A number of the puzzles could have easily been increased in difficulty. The developers could have given the player the option at the start of the playthrough. The slow and arduous pace of the main character made me want to scream with frustration, time would tick away with nothing being achieved.

Would I suggest this to anyone? Only those that are hardcore fans of the genre, and even then I’d be worried that they would not be challenged. I love the theme and the way this is presented throughout, the story is delightful, but the simplistic nature of the puzzles and the slow nature of the game play are too much of a negative, the only people I realistically see playing this are those that want a simple 1000G score.

Apocalipsis: The Tree of the Knowledge of Good and Evil Review

Romance, Love and Friendship will help you to bring back your one true love is this 15th century Fairy Tale Inspired story.

Beautiful art work.
The music builds the atmosphere beautifully.
Eerie images keep you on the edge of your seat.

Slow game play.
Puzzles are too simple.
No option for game difficulty.