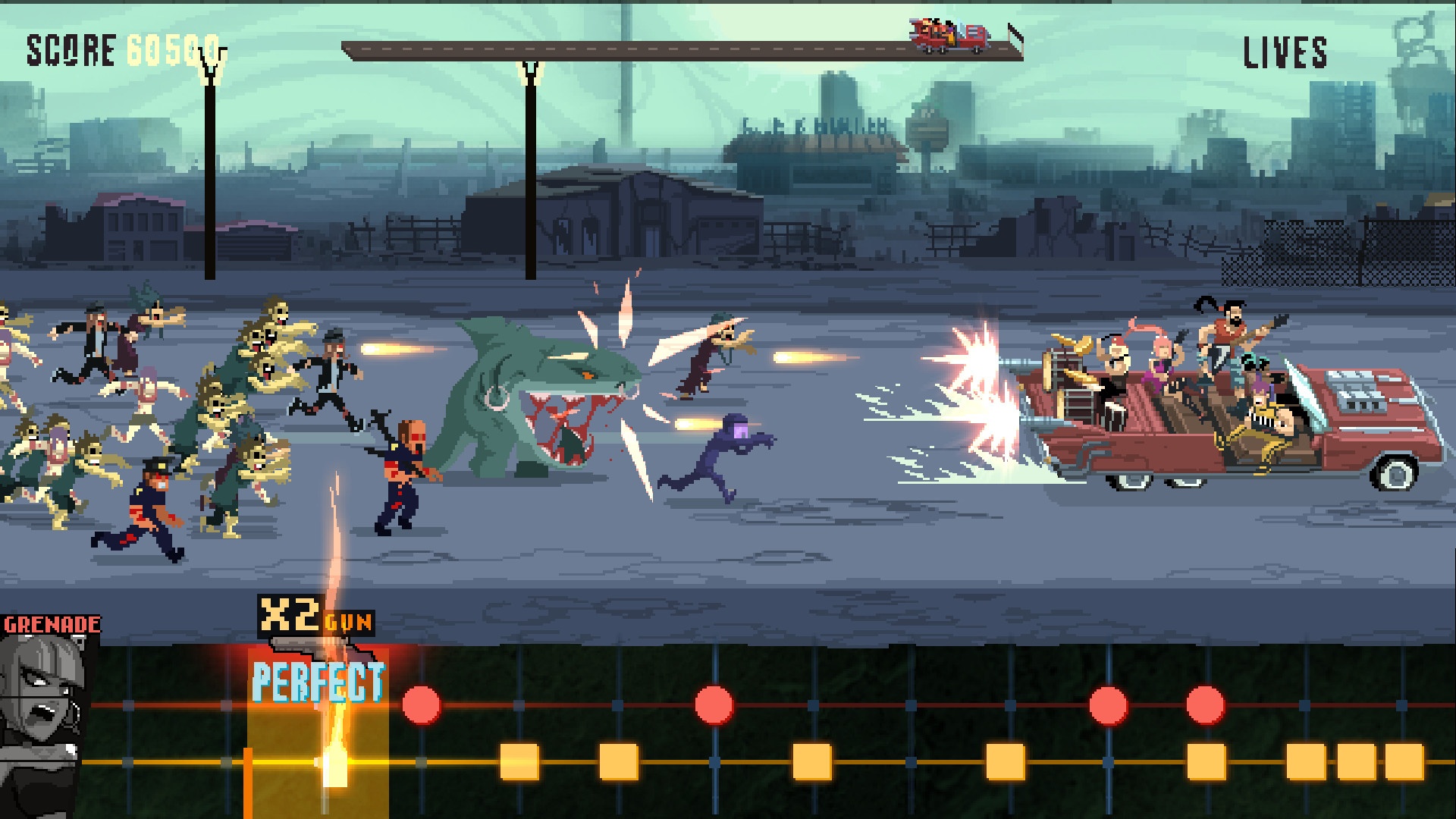 Heavy Metal is awesome. Whether you’re a fan of classic hair metal, legendary fantasy or speed metal, or even the more obscure subgenres, there’s something to be said and admired for driving guitars, insane drum solos and the real, primal sound of music. In theory, a heavy metal based rhythm game is going to be fantastic and cool, and, for the most part, Double Kick Heroes hits that idea spot on. However, there are a few flaws that keep this ambitious project from being Master of Puppets.

Double Kick Heroes is the story of five bandmates who’ve managed to band together and survive the first wave of the zombie apocalypse. This was mostly due, in part, to the Gundillac: an awesome vehicle that’s been outfitted with both the band’s entire musical rig and some massive firearms to drive off zombies. Running into some familiar and famous figures along the way, the crew learns that there’s a New World Order coming about in this post-apocalyptic wasteland, and they’re simply messing things up even more. Determined to survive and to keep rocking, this crew heads deeper into the belly of the beast, fighting off zombies, bizarre monstrosities and corrupt gang members in a quest for some peace and maybe a few drinks.

Graphically, the presentation of Double Kick Heroes is spot on. Done in a medium res pixel art style, I loved the way that everything from our heroes’ portraits to the massive boss fights came across. The Gundilliac is a gorgeous machine, and it’s clear and easy to see how the band is set up to ride and fight in this luxurious murder magnet. The landscape is perfectly desolate, and the homage characters that show up (Marlene Branson, for example) are amazingly done to capture the metal idols they lampoon without being too spot on. Best of all, the visuals aren’t something that’ll bog down most machines: even with a lower end graphics card, you should get smooth, clear delivery of the game from the word go. 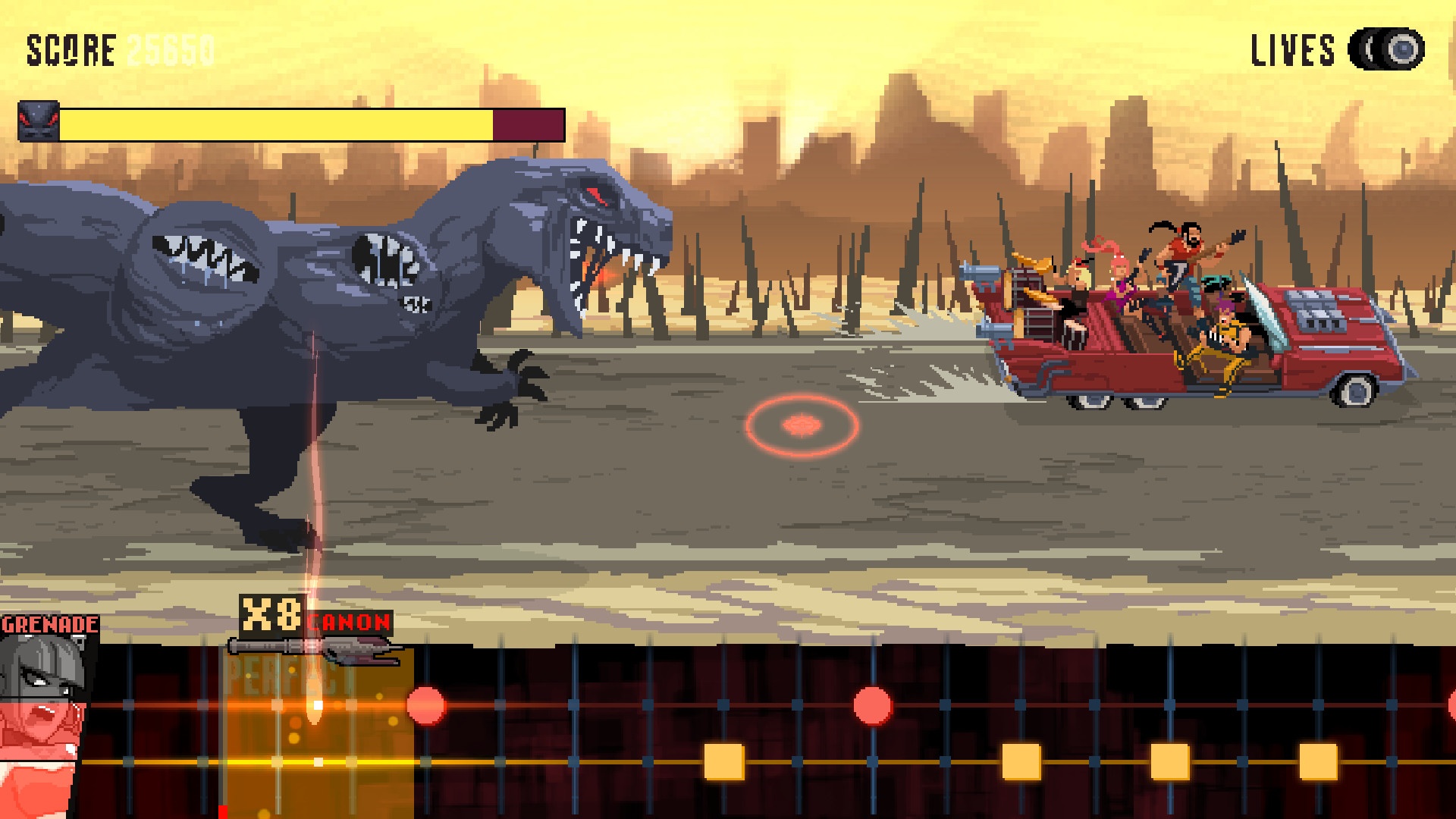 And the music is goddamn OUTSTANDING. Double Kick Heroes does a good job of running the gamut of metal types, bringing in a lot of inspiration from what sounds like Motorhead, Pantera, and even Tenacious D, if I’m not mistaken. There’s a lot of variety in terms of the music, but it is, at the core, all metal, so please keep that in mind. You wouldn’t believe how many people I saw online who were complaining about Eat Beat and saying “everything is from Blazblue.” OF COURSE, it says that loud and clear! So, if you seriously don’t like metal, than you’re headed for a world of disappointment and frustration. If you do, however, or even have an ear for well-composed and executed music, then Double Kick Heroes really sends it home with the soundtrack. Which is perfect, because, well, for a rhythm game, 50% of the entire thing is the music behind it.

Now, as for gameplay, Double Kick Heroes fluctuates between “damn awesome” and “crazy frustrating.” On the one hand, the idea is to fire guns with your drums, and also use the snare and cymbals to activate certain extra weapons, like tossing grenades. You have one rhythm bar for the drums, and you can hit either the high or low drum to shoot in said direction. This is great for keeping you focused but not overwhelming you with choices on the lower difficulties. In fact, you won’t even need to worry about snare and cymbal unless you do the more extreme settings, which we’ll get to in a moment. For the first few songs, no problem: you can do this game with keyboard or gamepad, though I highly, highly recommend keyboard. The developers, Headbang Club, also recommend one of the instrument controllers that you might have lying around after the Harmonix game glut of the 2000s. I think that the drum controller might be your best bet, but anyone who rocked out to Through the Fire and Flames on their plastic guitar could find success in that realm too.

But then you reach the first boss, and things kind of take a turn. Now, you have to keep in mind that the Gundillac is a car, and you can change lanes to accommodate the movements of said boss. Now suddenly you have to move as well as keep banging out notes, and you’ll notice something. See, even if you change lanes, the minor zombies can still rush your car and take away a life, which is fair, except they can do so by moving into blind spots that you can’t shoot. In the meantime, you’re also concentrating on this big boss man who has a lifebar and can ram you, so you need to move to shoot him and then move away to not die. Suddenly you’re juggling a lot of ideas at once, and you cannot lose your combo because, unless you’re playing on the lowest difficulty, you’re gonna downgrade your weapon, and then you’re in serious trouble. It stops being fun and starts becoming frustrating as you focus yourself to the point that you can’t even enjoy the different, crazy zombies on the road. 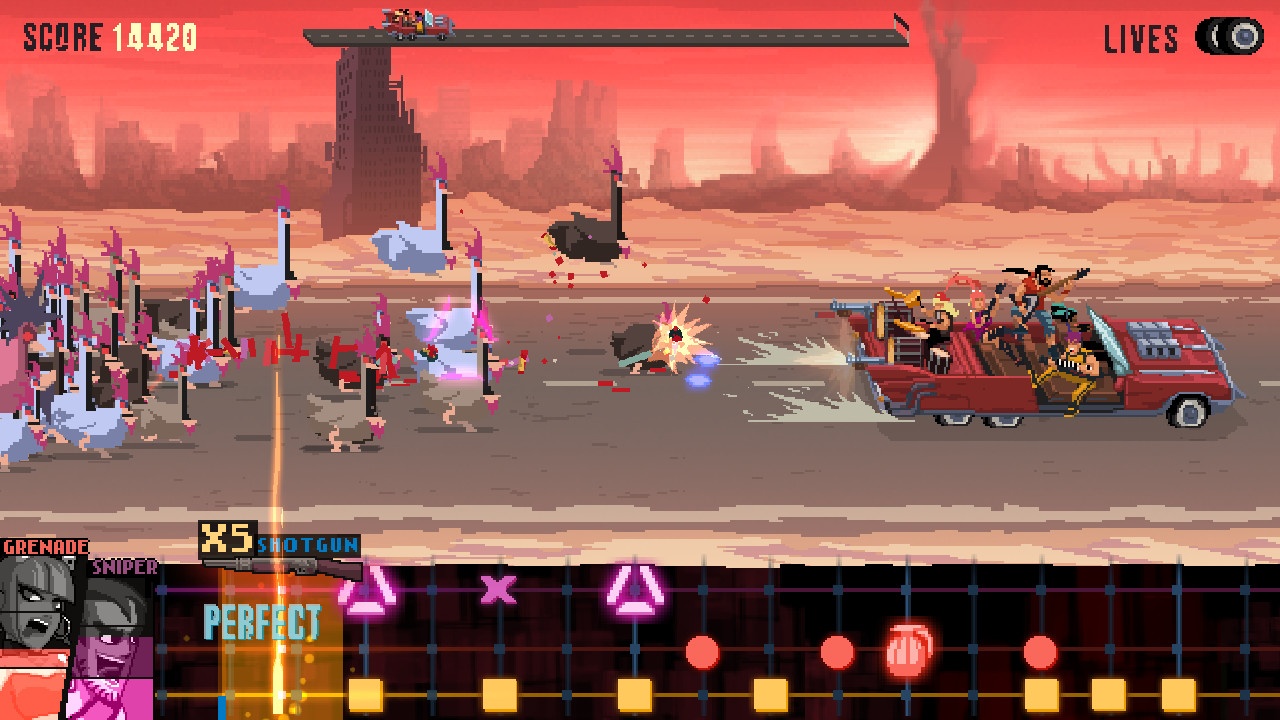 You can do the story mode to gradually experience everything and kind of move into it, but I don’t know if I recommend that for everyone who’s here for the music. The characters are all quirky and interesting, but they also tend to be pretty stereotypical portrayals of musicians. You’ve got a ditzy chick, a tough-as-nails girl, a lazy drummer, a dude who wants to just drink and thrash, and a kid who is trying to prove himself but is secretly scared. The idols are all good representatives of their real life counterparts, but how much you care about them is up to you. The story mode also just creates a lot more context and situational pressure to do well, and you don’t even need a full set of exposition in order to keep rocking: the game speaks for itself, so arcade might be enough to get the average player through. Hell, I personally prefer it, but this game is also still in Early Access: there could be a lot more to come in terms of storyline exclusive stuff. So, don’t write it off just yet.

Lastly, the editor of Double Kick Heroes is a damn spiffy setup, and fairly intuitive to use if you want to create your own tracks. Fans are able to properly decide the difficulty, how generous the grenades are coming, and if you want to be more on tune with the off beats or the main tune. I haven’t had a chance to create any fan songs just yet, but, using the tools available and the general outline of the game, I’m confident that we’ll have plenty for classic tunes soon. At the current time, someone has already done a pretty dope layout for Numb, so here’s to hoping more fans pick up the game and deliver even more amazing setups. You have to provide your own music files, however, so please remember stealing is wrong and downloading music to play it isn’t a good excuse.

Double Kick Heroes has set out to carve a new chasm in the rhythm gaming world, and I’d say it’s a flaming success at the current time. The concept is great, the execution is pretty smooth and anyone who’s got a knack for button mashing and head banging is going to have an excellent time. Hell, I might just hit up eBay and find one of those USB drum pads so I can play it even more successfully. Just make sure your CPU is ready, because this game is going to blow your head to the back of the auditorium.