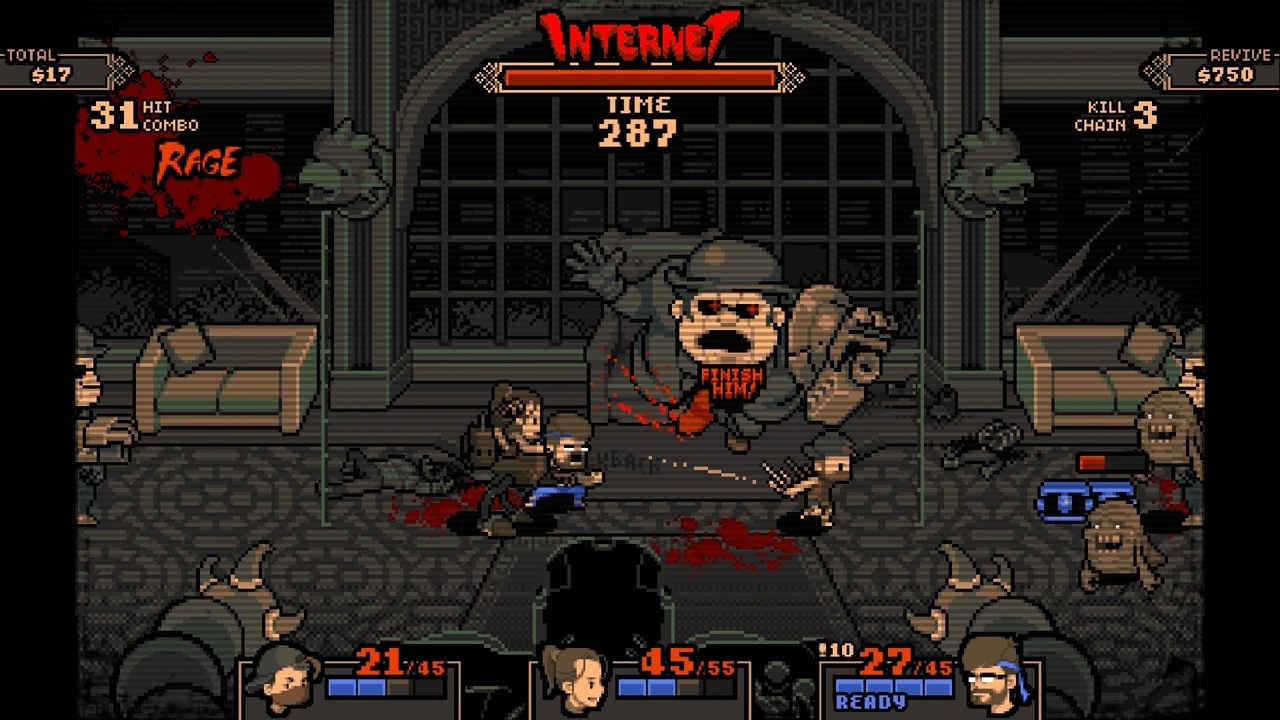 Streets of Red: Devil’s Dare Deluxe is an arcade beat-em-up that comes to us from Secret Base, a group that I’ve never heard of before but instantly identify with. It’s incredibly apparent, right from the very beginning, that this is one of those games that was developed by a group of people who simply LOVE games. From the very moment you load it up and it has a parody of the classic “Winners Don’t Use Drugs!” splash from the 80s/90s, you know that you’re going to be strapped in for a lot of referential humor, homage and satire. In my all-too-brief time with Streets of Red, I think I counted twenty individual references from games, old and new, and I’m sure there’s a LOT more. But the question is, does Streets of Red have enough to stand on its own as a game apart? The answer is a resounding yes.

Set against an inexplicable zombie-esque outbreak, you play one of six characters (four initially, two more unlockable) who are determined not to die and want to save the world. You’re apparently at a panel during a giant Con when the plague descends, which gives you a scope of what kind of hero you may turn into. Following the advice of a glowing, red fairy who appears out of nowhere and is CLEARLY malevolent, you transform into a much cooler being, ready to fight back and smash some zombies in an incredibly bloody way. Fight through several levels, small and large bosses, and discover the source of this undead uprising. Oh, and collect money. Money is crazy important, because, guess what, you could easily die, and money may make the difference in staying dead or not.

Be sure to test out all the characters before you really get down to business in Streets of Red. Though beating the main arcade mode with any of the four is possible, you really want to identify what kind of play style is best for you. Queenie, the mech-riding battle mage who is definitely not crazy unbalanced with power, was my choice, and I think it’s because she a.) had great range attacks and b.) could heal herself, which helped a ton. The main gameplay boils down to some great combo attacks, and a rechargeable meter that allows you to do power up attacks, like throwing ice beams, summoning lightning and other kinds of magic/badassery. If you take out a bad guy with a power move (when the words “finish him” flash above the mob), you can get some extra loot. Take out three or more at once with a power move to get some healing food. Some scenery is destructible and has treasure inside, bosses are everywhere and you basically need to keep mashing the button. You cannot jump. You can dodge, and you’ll use that a LOT in order to succeed. 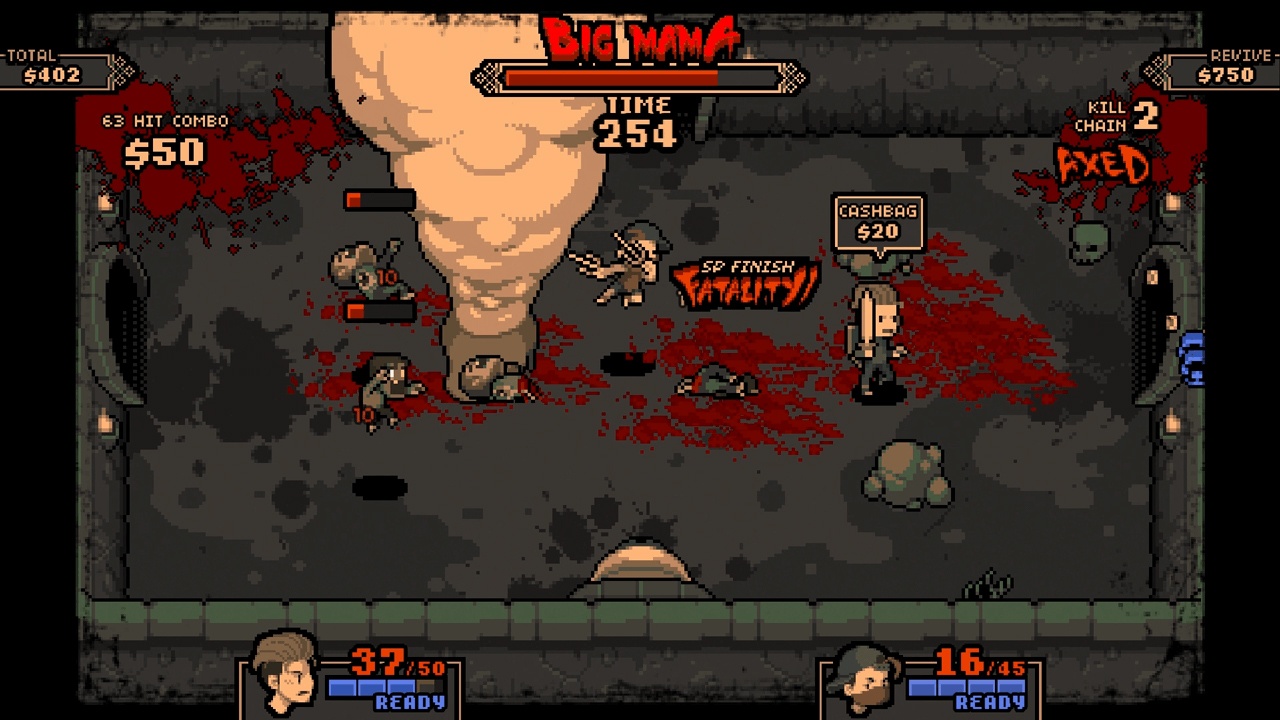 Streets of Red does a lot right, and I want to address that first and foremost. The graphics are impeccable: this balance of pixel art and smooth animation really brings the atmosphere to life, starting in the Con building, making your way through a ghost train, a school bus, a Dark Hall and more, and it all flows together rather nicely. There was some lag/stuttering when the on-screen action got too intense, but that generally happened in the wake of a boss being defeated. By and large, performance wasn’t an issue for Streets of Red, but players should be warned: there are bugs. You’ll get locked into certain places if an enemy hits you into an unmapped area, and you gotta hope you’ll be knocked out soon. I had to restart from a spawn point by hard-quitting after an unlucky combo killed me after a boss died, and I panicked, thinking I had lost the whole game. Most of the bugs are annoying at best, but be aware that they exist.

As for the combat itself, Streets of Red fully captures the excitement and replay enticement of a good beat-em-up. The enemies are varied from simple shamblers to massive brutes, face huggers and Chucky-style knife dolls, and everything in-between. You need to constantly be on your toes, because Streets of Red has one difficulty, and it’s “death.” Just as you get comfortable with the onslaught of melee damage, here come pregnant zombies who shoot fetuses at you (a bit tasteless, but it got a dark chuckle out of me). There are appearing/disappearing ghosts (who bear a striking resemblance to Slimer) who don’t do damage but scare the power out of you, rendering your big hits useless. You need to frequently mix up your button style, because otherwise you just keep mashing attack and getting slammed from every side. Dodge, strike, powerup, flee, and then really lay in once you get a great combo. For Queenie, especially, you need to wait until the right window opens, and then you just need to go to town on enemies as fast as possible, throwing out Drain spells and otherwise slamming away.

The bosses, to their credit, aren’t amused by your parlor tricks and will summon extra grunt zombies to distract and bother you as they fire massive lasers, barrel roll across the screen, and do something that looks a lot like M. Bison’s Psycho Crusher. There is definitely a boss who is at least inspired by Jim Sterling, and he’s a large part of the middle part of the game, but, despite fighting him a couple of times, he’s far from a one-trick pony. The final boss of the game needs patience and style, so much so that he’s the only boss with a damn countdown timer. I wasn’t ever overly-frustrated by the bosses, although I will admit that they took a lot more patience and, the first time I ran into Mama’s Boy (who is definitely Jason from Friday the 13th), that was my first permadeath, so it’s a learning process.

Speaking of permadeath, that’s a big selling point of Streets of Red, though I can’t help but feel it’s a misnomer. So, you can die and stay dead and lose your save-game, yes. But there are several ways to not die. You can use the cash you get from battles to revive yourself, but it does get more expensive each time. You can buy a soul token between the levels if it’s offered on the powerup table, though, again, it might not be offered. Or, if you’re a cheap and terrible person (like me!) you can force quit the game before the countdown timer ends and just reload from the start of the stage, like maybe the Switch went to sleep or something. It’s a bad trick, but it worked, and was important for when the game bugged out on me. Although, if I’m being honest, an intrepid adventurer won’t have to worry about that, especially if you rock it out in multiplayer, local co-op style. 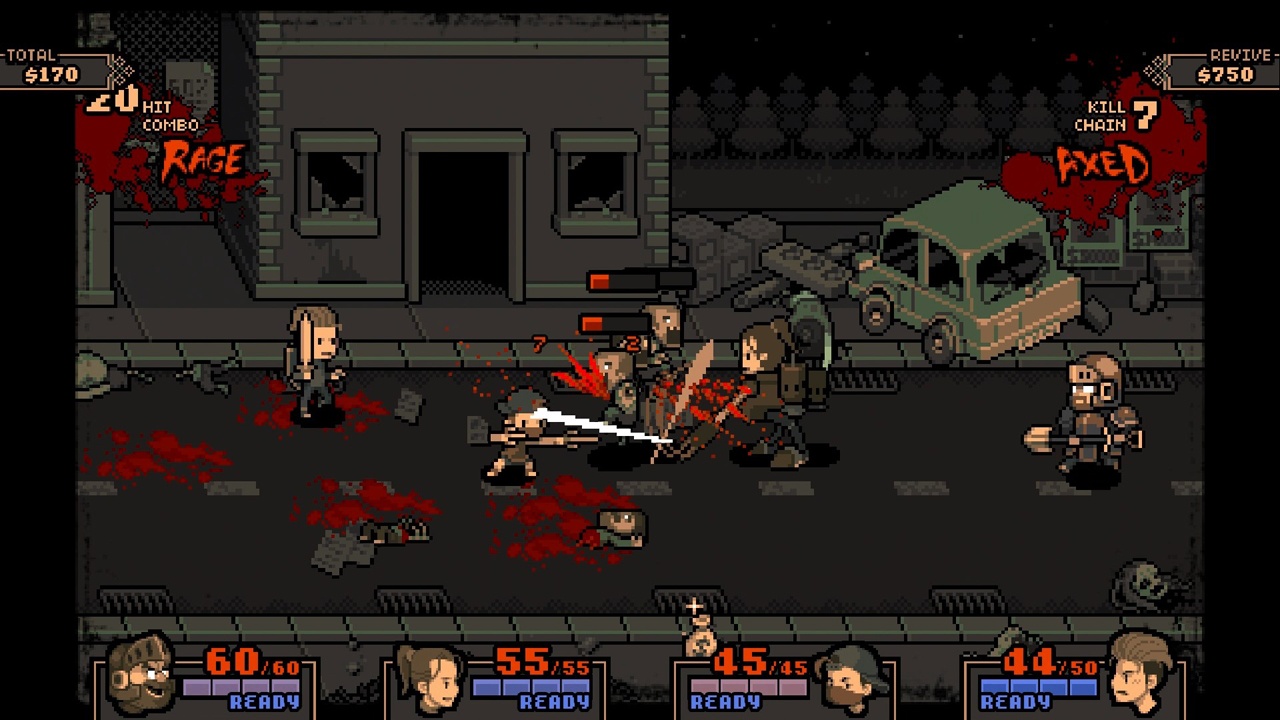 The different abilities that were offered between levels are ones that you purchase with the cash you pick up, and their usefulness, I feel, really depends on when they appear. There’s this one called Pirate that lets you get all future powerups for free at the cost of halving your life permanent. Cool, but I got this offered while I was on the way to fight the final boss, so it didn’t make a lot of sense for me. Powering up your special attacks, sure, makes sense. A special Sonic-style dash attack, yea, that was awesome. Increasing your health? Always important, I’ll take it every time. The only downside is that, no matter how much cash you have, you can’t buy more than one powerup between levels. I would have LOVED to dump my funds and super-inject myself to become a behemoth of zombie-squishing proportions.

Arcade mode is great, survival is alright (if you like the endless sort of deal) and the game length is perfect, balancing itself out in terms of offering new stuff while knowing when to wrap it all up. The only, ONLY thing that I didn’t like about Streets of Red was the voice over sound effects. Holy crap inside a burlap sack, hearing the characters, both bad guys and good guys, make noises over and over again, the same quippy lines (Jackson the Ninja sounded SO annoying) really hurt my head. The weird groan that Slimer makes when he appears? I almost kicked over the TV when three of them appeared at once. Thankfully, there is audio balance to completely mute the voice work and keep the bumping music and solid sound effects up, but Ye Gods was it awful to hear.

Streets of Red: Devils Dare Deluxe is a goddamn fine time to have, and actually has a lot of replay value at its heart. The characters are fun, the play styles are all varied, there’s just enough variable to make it feel roguish and the number of references are super fun to pick out. When one of the powerups was clearly inspired from Parappa the Rapper, I was totally sold. It’s totally hyper saturated, but we never stay on anything long enough for it to be obnoxious: these were peppered in for the devs to enjoy, not necessarily the player, and I loved them for it. The price is right, the gameplay is tight and the fun is definitely there. From Shovel Knight to Chrono Trigger, Mortal Kombat to Spike McFang (at least I think so), this is a classic montage of references inside a fantastic brawler, and I encourage almost everyone to give it a try.