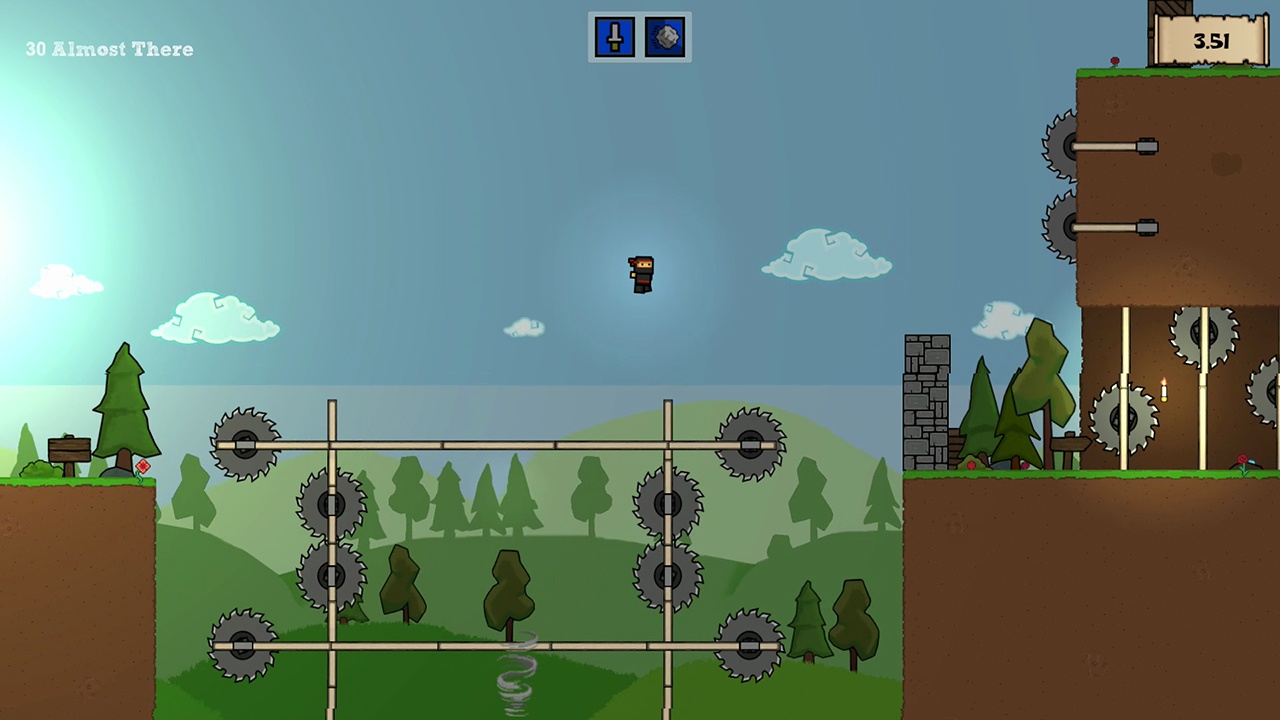 Save the Ninja Clan is video game developer Sometime You’s excellent action puzzle platformer. The game, available on the Nintendo E-Shop from 27/04/2018, will cost you £4.49 and will set you down 316 MB of data, which is well worth it for this game.

The game has two plot lines. The first is the linear storyline in which you must play through the stages to collect scrolls and save your ninja friends from an evil ninja who has kidnapped them using the skills at your disposal. The second storyline involves you exploiting ‘bugs’ in the levels to annoy the game manager who will then attempt to test you and then, after becoming bored with you, lets you through to the next level. This is by far my favourite way to play as the game manager is funny in a sarcastic way, and it’s also just fun to look out for the glitches that unlock this story line. You play through the game as three different Ninjas, each of which has a special ability. The first is the green ninja, who has the power of double jump, allowing you to jump higher and further than usual. Second is the grey ninja, who has a dash sprint ability allowing you to run faster and jump a little further. Finally, the red ninja has the ability to dash, disappearing and granting temporary invincibility, allowing you to phase through certain obstacles and avoid fire from enemies. 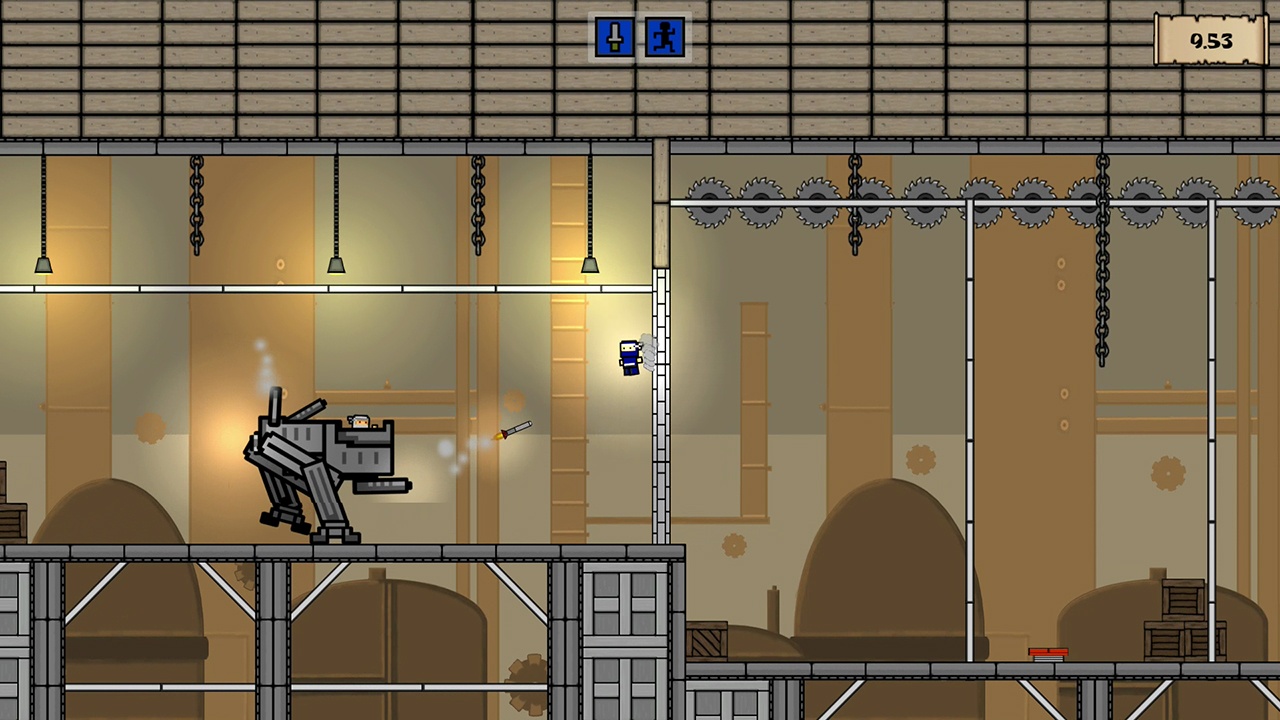 The presentation of the game feels nostalgic, like and older platformer. It achieves this with a pixelated art style, and the use of primary colours making it aesthetically pleasing. The level design is also well crafted, creating tough challenges for you to overcome. The game also introduces new obstacles as the game progresses so the challenge feels constant. The design of the characters can feel a little generic, but I supposed there are only so many ways you can design pixelated ninjas. The music also helps create the nostalgic feel, however can also feel really generic. However the music for the boss levels is exciting and add urgency to gameplay, and are my favourite tracks in the game.

The game plays really well, and with the gimmick of each world being tailored to one of the ninjas special ability, there is enough variety so the game doesn’t feel repetitive. It is obvious that each level is designed to be different and challenging to make you think of creative solutions to get the scroll. The glitches are also designed and placed well, where if you didn’t know it was something the game was about you could miss it, but if you know what you are looking for you can easily identify what you are supposed to do. Each level also has a throwing star upgrade point which you have to figure out how to get, also providing challenge and replayability in case you miss it or can’t figure out who to get to the point at that stage of the game. The bosses and enemies are also a good test of skill and up the challenge, with some enemies still causing me problems after playing for a substantial amount of time. 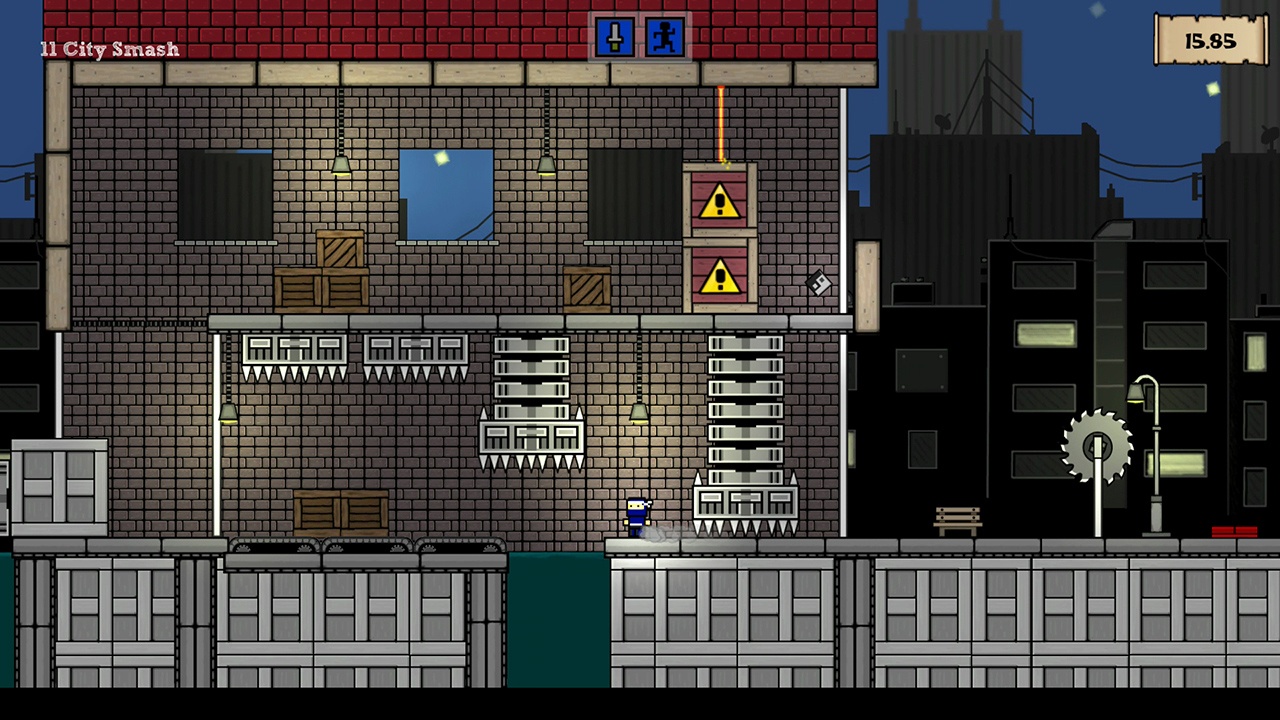 Overall I have various praises and a few improvements to suggest. The game captures the essence of old school platformers while still being able to feel refreshing within the genre. The game mechanic of breaking the game is also the best aspect I found, it was to see how I could annoy the game manager each time I would do something I wasn’t supposed too. One problem I did find with the game was that it could be prone to lag which can be annoying during extended gameplay. An improvement I would suggest for the game would be to add more ninja styles as it would be fun to figure out how best to use them for even more fun in the game! Save the Ninja Clan has been a joy to play and I highly recommend it, however it would be helpful if they could sort out the problem with lag.