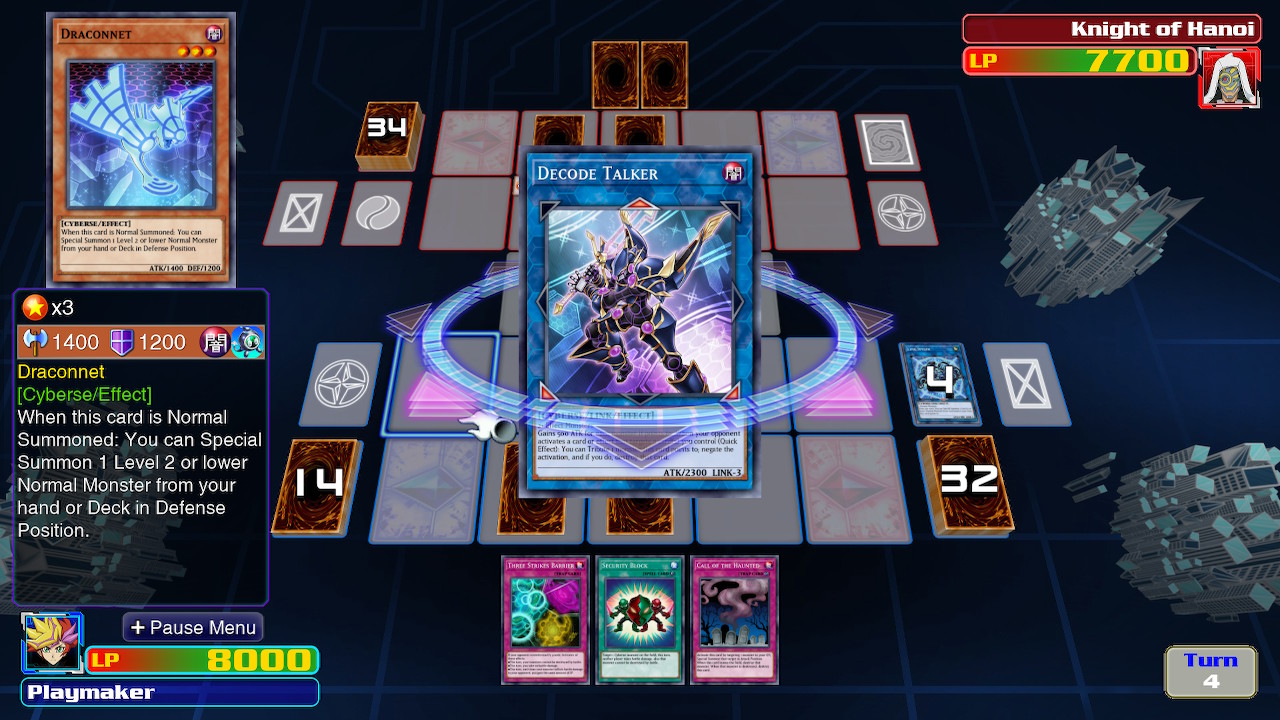 It was on the Nintendo DS and PSP, that I first came across Yu-Gi-Oh! in a digital format. I had never been one for the Anime Series or the collection of physical cards; it never really appealed or was too expensive a hobby to indulge in. But when it came to the video game representation of its combat and collecting though, it was a game that caught me hook, line and sinker with its tactical and addictive gameplay. That was a few years ago now and despite seeing iterations released on home consoles and PC, it never felt the same to me, as it suited the portability of the DS and PSP better than the couch comforts of my large-screen TV. Time and time again, I found myself dusting off my redundant hand-helds, just to dip my toes in again and satisfy that craving for another blast of TCG/CCG gaming. Now though, it’s time to lay those fond consoles to rest, as all of my prayers have been answered with the release of Konami’s Yu-Gi-Oh! Legacy of the Duelist: Link Evolution on my bigger, brighter and ever-portable beauty that is the Nintendo Switch.

If, like me, you’re a veteran player of Yu-Gi-Oh’s digital format, you’ll find an instant familiarity within this release and immediately take to it like a duck to water. In fact, this is the same exact release that appeared on the Playstation and Xbox consoles, as well as PC, in 2015. However, all of the DLC has been included with this release and the UI has been revamped to produce a sharper, cleaner look to all of its aesthetics; making this the best looking and most complete collection of Yu-Gi-Oh! to date. It covers all of the seasons from the original Yu-Gi-Oh! through to ARC-V and even up to VRAINS; although the latter is not a complete campaign with only three missions and one booster pack. However, it covers the complete history of the series with a revisiting of key moments from each of the seasons of the hit anime.

If you’re new to the genre, then this is the perfect game with which to introduce yourselves to the delights that this TCG/CCG holds. The game plays over two fronts: firstly the building of card collections and deck building, the second is in using your chosen or created deck to battle a variety of opponents on a purpose-built board in order to prove your worth with the strongest cards and come out victorious. The playing field is comprised of a series of ten squares that face off against each other, with a further two central squares reserved for special cards. Each of the grids lay in rows of five squares each, with the top row reserved for monster cards and the bottom row used for spells and traps. In a turn-based mechanic, you each take turns in laying cards from a hand of five, choosing defensive or attacking positions, setting traps or casting spells in order to reduce the health bar of your opponent to zero. 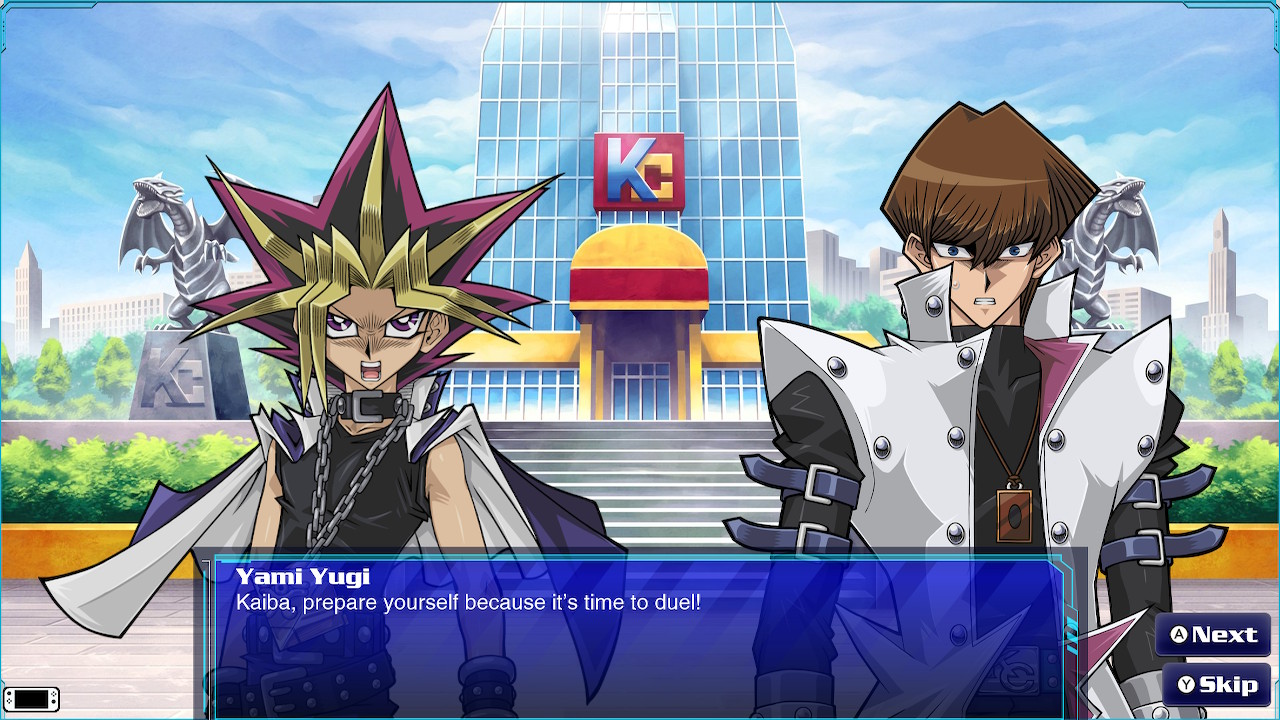 In basic terms, it’s an extremely easy game to get to grips with. However, there are many elements to the cards themselves that produces an unprecedented amount of depth and tactical gameplay. The key here is to learn the intricacies of the cards and use them to the best of their abilities. It’s one of the areas where the fun of this game lies, in learning all of its mechanics to eventually become a force to be reckoned with. Once you hit that sweet-spot of producing a deck that you know works, the feeling of domination and pure satisfaction that this game provides is one that is unsurpassed by many other video games. It can appear daunting at first, but through constant play and experimentation, you’ll find a play style that suits your level.

Whatever season, or period of Yu-Gi-Oh! history you play, the first bout always offers you a tutorial on the mechanics of the functions of the cards used. Everything is in here, from tribute summoning, synchro pairing, pendulum formations, XYZ bindings and link monsters. Learning these intricacies can be tricky at first, but as you build your collection, you’ll find cards that work in unison together and produce more explosive results. Again, it’s also here where the fun of this game lies. Each season comes in an episodic form that relives moments from the series. As you take part in each bout, you fight to win; doing so rewards you with a variety of unlocks from player icons, card packs and decks, signature cards and DP. The latter of these is a form of currency that can be used to purchase booster cards from the shop to fill out your collection and help to produce that killer deck that you constantly strive for.

It soon produces an addictive style to the gameplay, as you build a better deck, win more bouts and gain more DP with which to build your collection of cards. With over nine thousand different cards to collect, there’s plenty here to keep you going over the long term. In fact, there’s so much content here, that this is a game that contains an infinite amount of playability, with key battles plus the option to reverse the combatant you play as, sealed tournaments and draft plays, which play in a similar fashion to Fifa’s draft token modes, as well as pre-made or custom decks and local and online multiplayer. The options of game modes is simply endless, producing a game that can last a life-time with its varying degrees of tactical play and endless building of various card techniques. 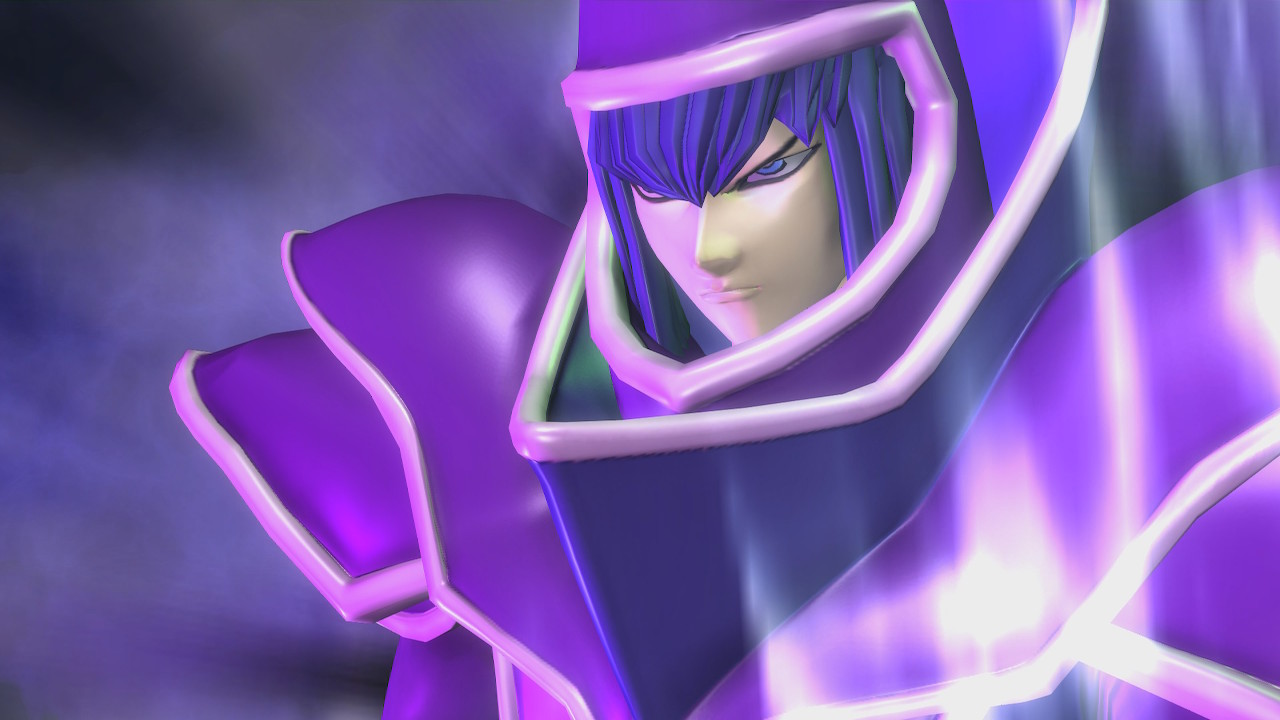 Despite its depth and levels of intricacies that take time to learn, the actual flow of the gameplay offers a refined and streamlined experience. With this Switch release, everything appears to be sharper, from the detailing and description of each card effect to the brief animations of specially-summoned monsters. This becomes even more apparent with the options for building your own deck. With so many cards to choose from, especially as you build your collection, trawling through each variety can become time-consuming and eventually, a bit overwhelming. However, the UI has been crafted in such a way, that you can select specific orders in which to view your cards, from border styles, star values and even named varieties that work together.

For instance, should you want to build a deck that revolves around dragons, dinosaurs, harpies or amazoness, as well as countless others, you can tailor the UI to display only cards that correspond with those categories. This produces an easy-to-follow and short-cutting way of developing your own playing deck. You can even build a variety of decks with plenty of save points that can be easily labelled and each deck fruitlessly called upon should you wish to play them. In short, this can come across as a confusing and difficult game at first, especially for newcomers, but with helpful guidance and through learning the abilities of cards, is a game that can soon be picked up and in no time at all, you can easily produce a deck that offers a good challenge for any player.

Overall, Yu-Gi-Oh! Legacy of the Duelist: Link Evolution is one the finest TCG/CCG video games ever produced. It’s lure lies in the learning of its mechanics, both on the game board and in each individual card, the collection of the cards themselves and building towards producing that killer deck. Its combat is fun, satisfying and ultimately, rewarding and offers a variety of bouts in a loop of endless replayability. Its online lobbies are constantly full, meaning you’ll always find an opponent to fight against and its here where the real beauty of the game lies. Fighting other players around the world always presents you with new challenges as you fight against a variety of user-created decks that you can learn from. If you’ve ever played a Yu-Gi-Oh! game before, then what are you waiting for, you need this game on your Switch. If you’re a newcomer, or even a fan of TCG/CCG, then again, you need this game in your life. It’s easy to play, yet hard to master, but ultimately, it offers one of the most rewarding experiences you’ll ever find in video gaming.

The cards of Yu-Gi-Oh! Legacy of the Duelist: Link Evolution come to life on the Nintendo Switch.