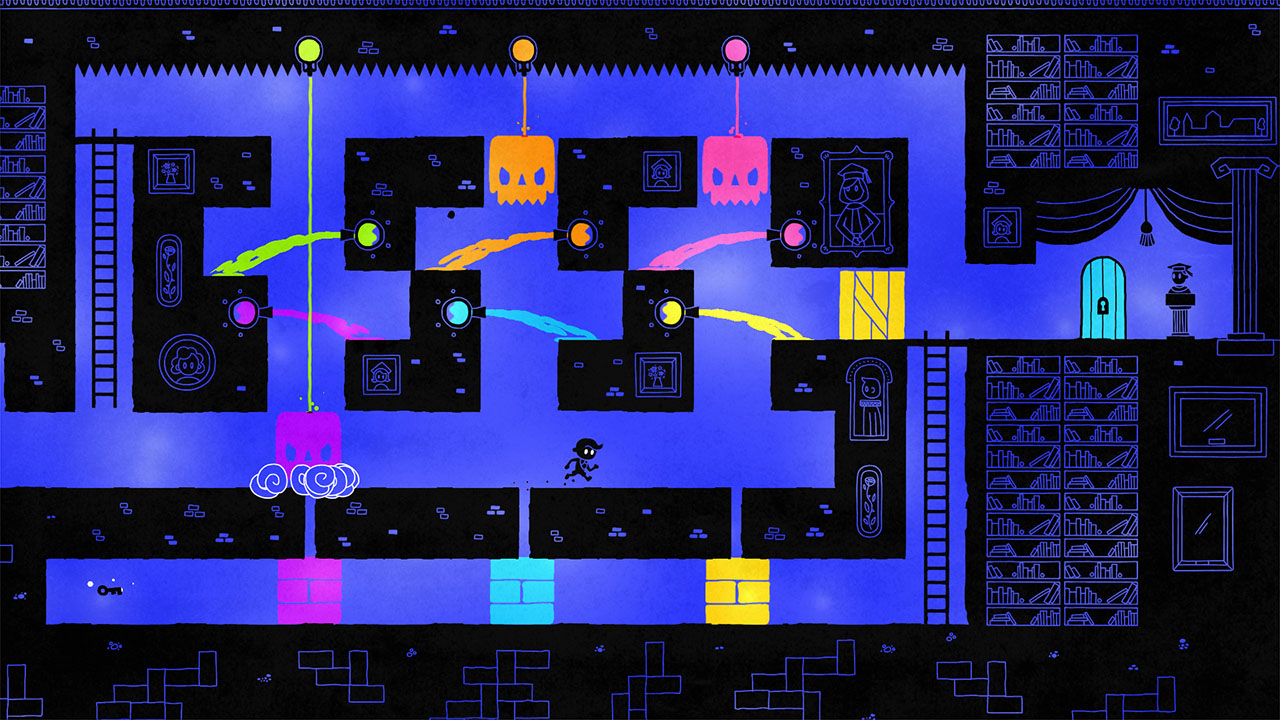 These days I play far more indie titles than I do AAA. I’m spoilt for choice when it comes to intensely fun platformers, puzzlers, twin stick shooters etc. that immerge from small studios throughout the world. Despite this, it’s very rare that I stumble across a game that is just a little bit more sophisticated than the norm. Like ‘Braid’ and ‘Fez’ before it, ‘Hue’ is a platform puzzle game that is a bit special.

Hue is a young man that lives in a small fishing town. He discovers a note from a loved one that goes into some detail about her life, the research she has done on colours and her discoveries regarding perceptions of reality. She reveals through her letters that something has gone wrong and that she’s subsequently vanished. In order to solve the mystery of what happened to her, Hue has to reassemble a powerful ring that was created as a result of this woman’s research.

The main mechanic of this game is your ability to adjust the background colour, which can be used to hide and reveal foreground objects. These objects can then be used to solve puzzles and make progress. If you cannot see something in the foreground because it’s camouflaged into the background then it doesn’t exist and cannot interact with you. As you begin, the world is represented only by shades of grey, however you quickly acquire the ability to turn the world cyan which you can use to clear an obstruction to a system of caves.

Hue is very comfortable to control. You can move him around with either the D pad or left analogue stick, he jumps with X, can grab / pull blocks with square, and can change the colour of his surroundings with the R stick. The ring is represented by a colour wheel, so when you shift the R stick in any direction the game will slow down and give you time to select the colour you need. This is great as it grants you complete control of the situation without pausing or disrupting the gameplay. In the early stages you’ll be limited in how many colours you can select, but as you discover more pieces of the ring the colour range will grow allowing you access to new areas. 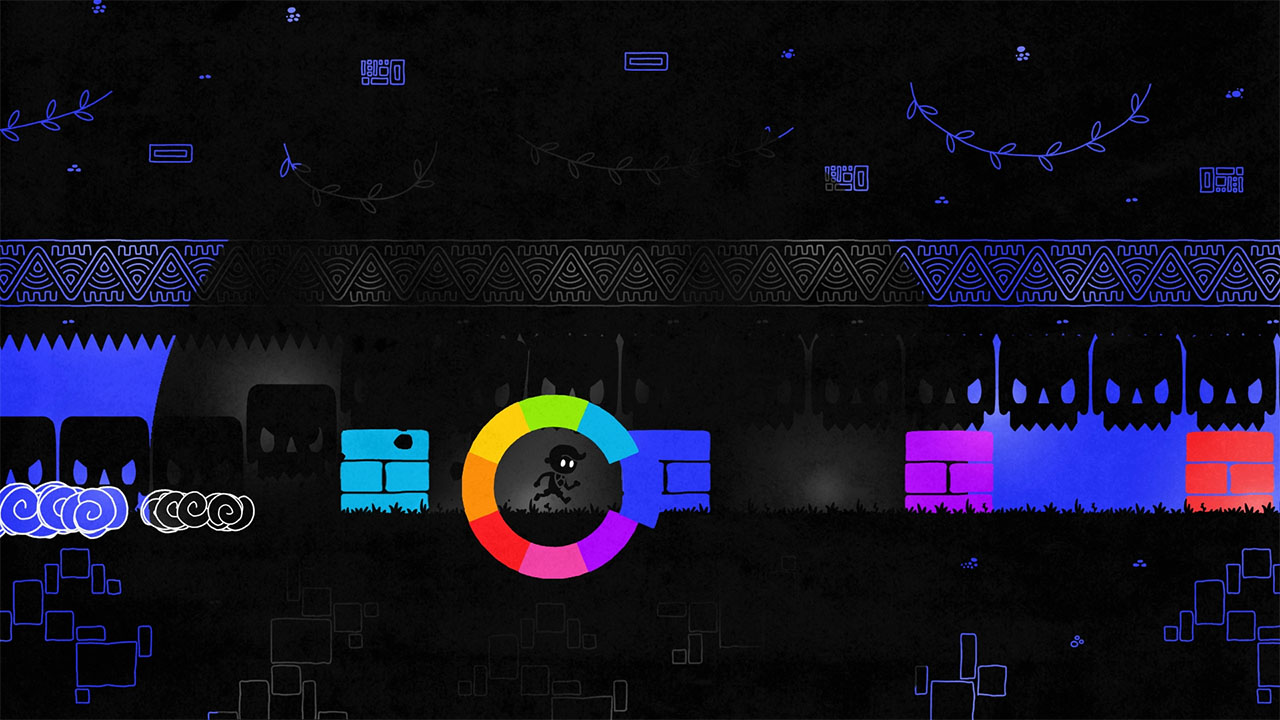 As you make progress you’ll mainly come across two types of obstacles. The first type consists of platforming sections where you have to traverse the stage carefully while avoiding hazards. An example of this would be leaping across stepping stones over a bottomless pit. This sort of obstacle would be common place in a regular platform game, however the twist here is that you’ll need to keep adjusting the background colours as you leap in order to ensure that what you’re landing on is visible.

The second type of obstacles are the slower paced physics puzzles. These are situations where you’ll be trapped in a large room and need to use your powers to arrange blocks, create platforms and clear a safe path to the exit door.

There are many types of coloured apparatus that you’ll encounter on your journey. There are crates of various sizes that can be pushed around, paint which can be used to change the colour of crates, balloons that can lift platforms, lasers that can power doors, etc. As simple as the premise is, this is a highly compelling puzzle game. Once I started playing I didn’t want to put the controller down until it was finished.

The presentation in ‘Hue’ is first rate. The graphics are all stylized using solid vector sprites. The background has some simple textures which vary depending on the situation, but the foreground graphics consist of solid black shapes. Although the game only uses a limited colour pallet, the colours that are used make everything look intense, high contrast and bright. 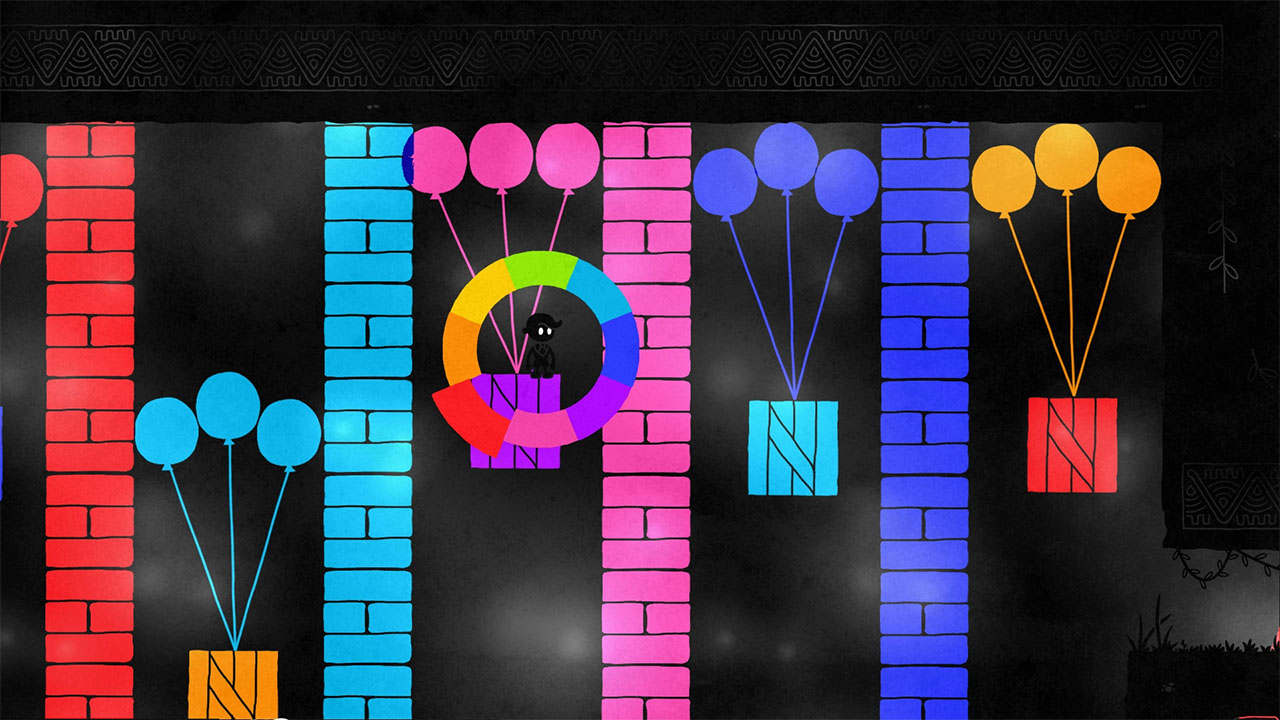 If the graphics were not enough, the sound in this game is also exquisite. The soundtrack includes some beautiful and relaxing piano compositions which sound as if they were professionally studio recorded. This creates a very tranquil atmosphere and helps keep you calm and focused on the task in hand. In addition to the music, there is also some pretty nice voice acting. As you journey along you’ll encounter more notes written by this mysterious lady who’ll reveal more about the story. Since these letters are read out loud you do not need to stop what you’re doing in order to read the subtitles.

The level of challenge is difficult to judge as success depends more on your problem solving abilities than conventional platforming skills. Personally I found the first three quarters of this game to be fairly easy. There were occasional moments where I’d be stuck in a room for a few minutes feeling stumped, but after a little bit of experimenting I always worked out the solution. I didn’t encounter any stronger challenge until the final sequence where the puzzles are a lot more complicated. Despite this I still completed the game in my first sitting.

It took me around four hours to reach the end which may seem a bit disappointing for some, but personally I was completely satisfied. ‘Hue’ never outstayed it’s welcome and had me hooked from beginning to end. In addition to the main quest there are also 28 hidden collectibles to discover. I found about a dozen of these naturally as worked my way through, so I still have excuse to replay the game and have a further look around.

In summing up I think Hue is a great little game. If the idea a relaxing puzzle game with intense visuals and a wonderful soundtrack appeals to you then I highly recommend it. A real pleasure.