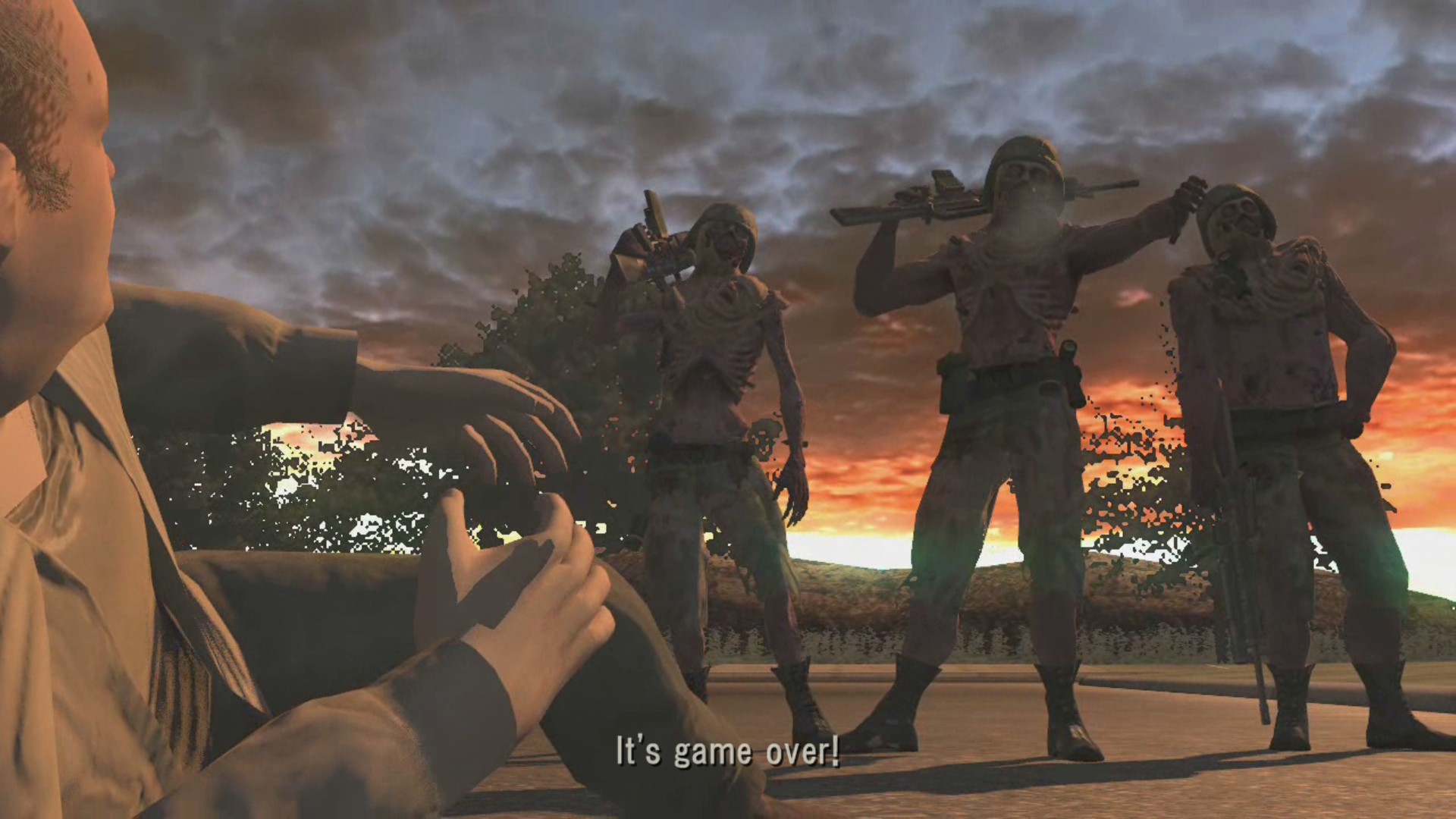 Bullet Witch has apparently come to the PC, and, like many out there, I’ve heard tales and legends about this game. Something about road to Hell and good intentions, and basically the word “disappointing” rebounding over and over again. Having totally missed out on the XBox 360, I never got a chance to see this game in action or even entertain the notion of checking it out. Then Marvelous Inc. announced they were going to handle the porting of the game to Steam, and suddenly this became somewhat of an exciting prospect. Games getting ported to the PC for literally anyone to enjoy is a cornerstone of why I continue to PC game despite wrapping myself up almost exclusively in Switch content (with no regrets, mind you). Still, I figured it was time to dust off the video card, give my hard drive a good cleaning (and getting my space back from Dark Rose Valkyrie) and prepare for a deep dive into something that I clearly was in no way ready for.

Bullet Witch takes place in the far distant year 2013, where humanity is basically wrecked after “everything” happens. Seriously. There’s a massive earthquake, then a plague, then I think a tsunami, Hitler Two appears, and that’s before the demon outbreak occurs. Doing fast math, the player must conclude that less than 25 percent of the current world population is left, and those survivors are being hunted by demons wearing human skin. Not even well, just wearing it loosely around their shoulders like the worst shawl I’ve ever seen. Thankfully, Alicia Claus, a witch (because those exist too) is here, and she has dark magic, loyal allies, and the biggest gun imaginable at her disposal. Alicia and her companion, a dude named Max Cougar, set out to discover and hopefully plug the source of the onslaught of demons, and to also find out more about Alicia’s mysterious past, because, hint, witches aren’t exactly commonplace in this game.

Through no fault of its own, Bullet Witch is often lumped in and compared to Bayonetta, which has found a lot of love and life after Nintendo decided to invest. Bayonetta also saw a Steam release last year, and it was a perfectly competent and solid port. Bullet Witch doesn’t really share, well, any similarities with Bayonetta other than a.) having a witch with a gun and b.) really sexing up the protagonist. Strangely, Bullet Witch is incredibly tame compared to the over-the-top eroticism of Bayonetta, which almost makes the fleeting moments feel a bit more surreal. While Bayonetta is almost punchdrunk on her own appeal, Alicia is oblivious to the outfit the player has thrown her into, resulting in the sexiness being more accidental than purposeful. No clue what that means for the players and their own reaction to it, but there you go. 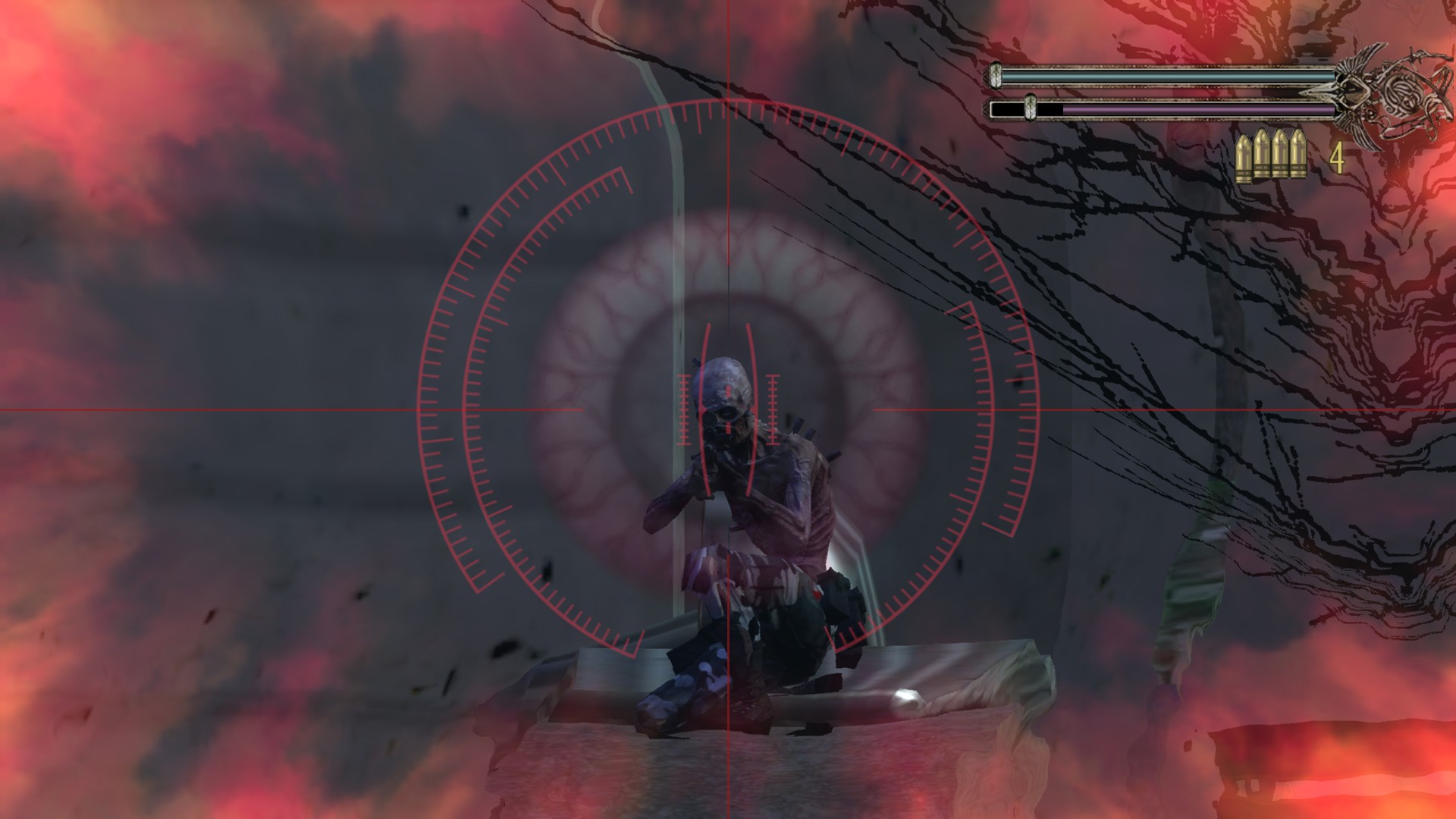 Additionally, Bayonetta is a lightning fast, frantic button masher of a brawler, resulting in sick combos that rack up damage and gore at an alarming rate, often climaxing with an obscenely powerful and damaging Pushishment attack. Bullet Witch, in crazy stark contrast, is far more focused on the gunplay and magic of Alicia, creating a game that’s borderline tactical in its presentation. In large, expansive fields, you’ll find that you can go for minutes without encountering an enemy, and then you’ll find a good knot of them and away you go. There’s a lot to be said for accuracy: bullets are unlimited, and you fire at an incredible rate, but there’s no auto-lock, just you and the weapon. Alicia can get a bead relatively quickly, and the general resistance from the AI is something that starts at well below subpar and eventually works up to “almost conscious.” Your biggest defense is moving: by simply strafing, jumping or even just running straight ahead but not directly at the enemy, you’ll dodge 90% of the shots.

Speaking of gunplay, Bullet Witch is definitely one of those games that you have to get through once to make it the best experience. Let me explain: initially, playing through, you gradually unlock better and different guns that you can swap between, like the big cannon or shotgun. Each of these weapons have their advantages, like clearing out close knit enemies or blowing up destructible scenery. When you go back to play through again, having all those guns ready to serve makes the game significantly more enjoyable, since the gunplay is what makes the whole thing. I was shocked when I got close to a demon the first time and found out it took like five or six hits from my melee attack to bring it down. The conclusion is to shoot the living hell out of everything, constantly, and having more guns with more variety makes the game.

Being a witch and all, Bullet Witch also incorporates some pretty interesting magical spells, ranging from instant walls (perfect for cover) and massive lightning (ideal for boss battles) to spells that heal the NPCs who aren’t trying to kill you. The magic wheel is a cool concept, and everything is connected to a magical gauge that will refill over time. Magic, sadly, is a bit unreliable: you can’t trust it to solve most problems because you need time to pick a spell and get it situated. This is why the heavy sorcery works best in boss battles and later on, when you have a small squad to absorb bullets and distract the big baddies while you get the spell just right. Be careful, though. The landscape of Bullet Witch is totally destructible, which is great until you accidentally summon lightning in the wrong spot and drop a building on yourself. One particular tower actually knocked me THROUGH the floor and into glitch land, where I still died anyways, just in the Underworld. 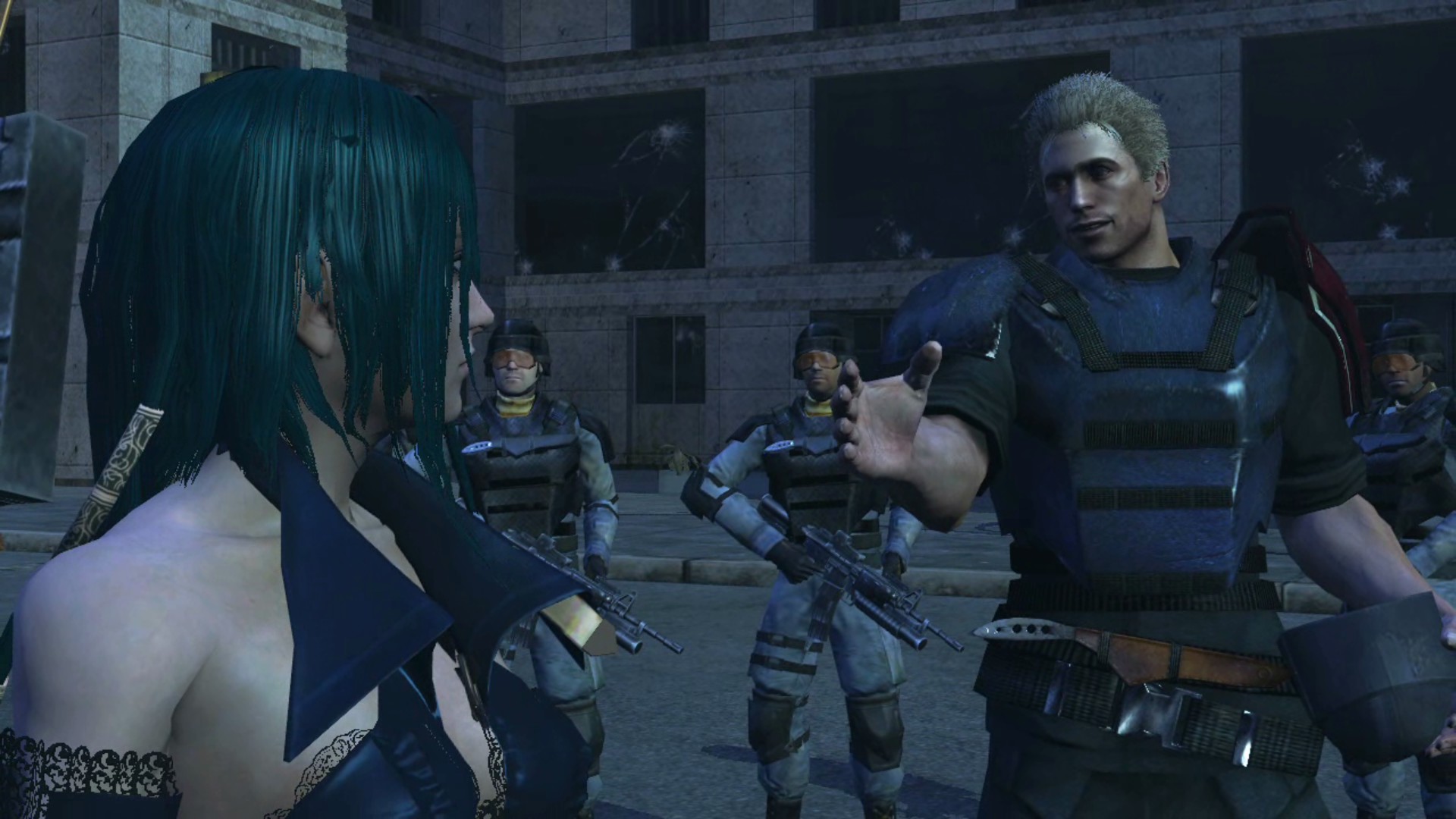 The performance of Bullet Witch is a blessing and a curse on the average PC. Though it may not seem like much, this game came out over ten years ago on the XB360, which was still a very young system at that time. Marvelous did a wonderful job with the porting, with the end result being one of the more true-to-form ports, keeping the game looking great on low end cards and sparkling just a bit more on higher end machines. However, there are no HD skin packs or magical DLC baked into this version. Sure, it has all the costumes and bonus missions that were slowly released, with the costumes being available immediately, but the biggest draw of the game is the curiosity of a forgotten title from the last decade. When Alicia runs, it’s the most awkward thing you could imagine, because the devs simultaneously wanted to have her keep a hand on her gun, propel herself forward in a powerful way, but also show off as much leg as possible to maintain the fan’s interest. It looks so bizarre at times that you’d think she had never run before. I didn’t have any screen tears or choppiness, which is fantastic, and it let me focus on the game and see the inherent purpose of what they set out to accomplish.

There’s not a lot of game to talk about with Bullet Witch. The bonus missions after the game wraps up add a good hour or so, but, overall, even new players could bang this out in a couple of days, one if they’re deeply invested. It’s hard to really make a stand with a game like this, because it is fascinating: a great idea, with strong vision, that was right at the right time to make a killing, and then have it just feel…meh. I don’t think the game deserves the hate that I’ve read, not even close, but it’s so disappointing to feel what should be happening and then play what is happening. However, my full impression is also tempered by the fact that you can get this on Steam for less than half what a new copy would have cost. Add that into the novelty factor and the potential for PC mods, and somehow it seems like it could be a great use of time. Don’t expect Bullet Witch to get GOTY for Steam, but, if you’re a fan of Japan’s own brand of unique lifestyle, you’ll have a good time.