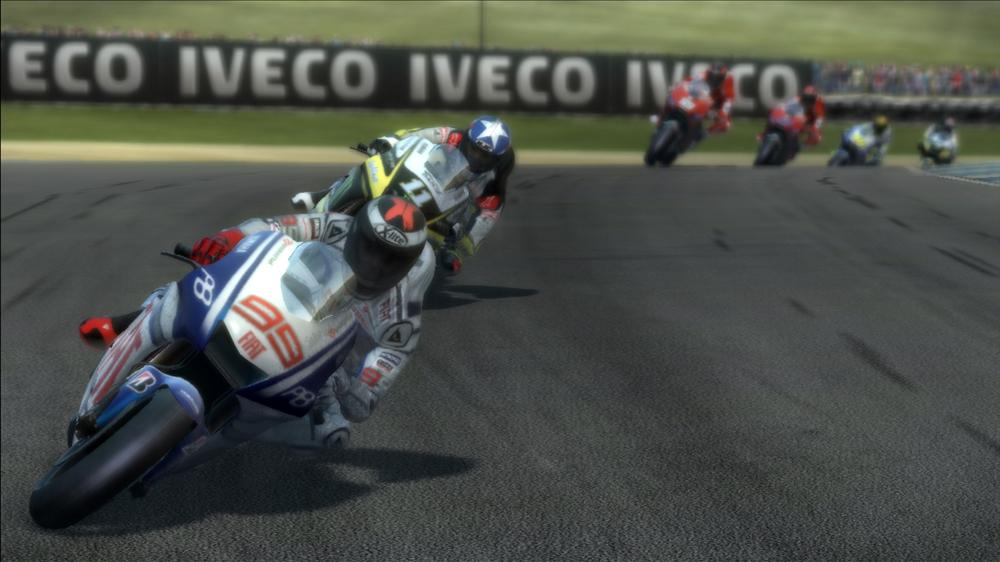 Despite its relatively niche standing, the world of superbike racing has been extremely well represented on this generation of consoles. Not only is MotoGP 10/11 the fifth entry into the series since the release of the Xbox 360 back in 2005, but there has also been some pretty stiff competition released in the form of the sim-centric SBK X.

While the solid, if somewhat sterile, SBK X has managed to distinguish itself as the go-to game for superbike simulation, the MotoGP series has suffered in recent years from a bit of an identity crisis – never quite sure if it wants to be an unforgiving arcade racer or hardcore simulation. This confusion came to a head last year with the release of MotoGP 09/10; a game that veered wildly from one extreme to the next without ever capturing the essence of what makes a great arcade or sim-based racer.

That’s certainly not a problem for the 2010/2011 iteration though. The folk at Monumental have unequivocally set out their stall: MotoGP 10/11 is a simulation in every sense of the word. The learning curve is steep, the new handling model unforgiving and the challenge consistent. It may alienate those who enjoyed the borderline ridiculous breaking of last year’s release and the handling model that encouraged throwing one’s superbike into a corner at near supersonic speeds, but for those looking for a more realistic representation of the sport and a generally more rewarding experience, MotoGP 10/11 will deliver where its predecessors so often did not. 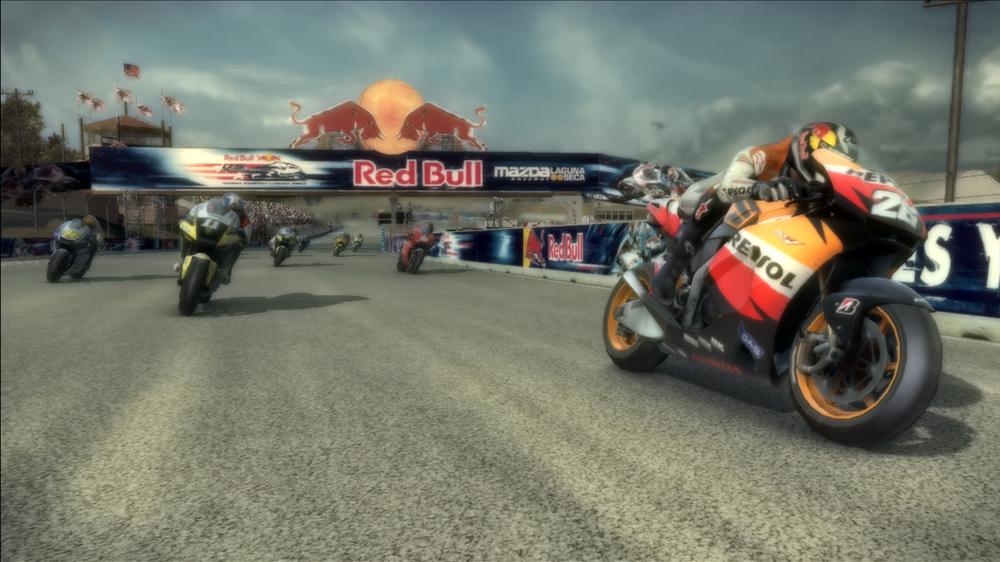 Even with the steering and breaking assists on, the first couple of races will almost certainly prove a rather humbling experience. Even for those who have spent considerable time with the franchise in the past, the new physics engine and unforgiving breaking mechanics will see even the finest riders eating gravel for the first hour or so of gameplay. Persevere however and you’ll be treated to one of the finest driving models on two or four wheels. It doesn’t have the immediacy or wow factor of a Project Gotham or even a MotoGp 09/11 for that matter, but what it does deliver is an edge of your seat, sweat-inducing racing experience.

Perhaps more importantly, success in MotoGP 10/11 delivers a real sense of accomplishment that is so lacking from many of today’s eager to please racers – believe me, a clean lap with no meetings of face and floor delivers a real sense of satisfaction. A now obligatory rewind mechanism has been added to help ease players into the game (if any game needed it, it’s MotoGP 10/11) but even that will decrease your reputation if you use it too often in Career Mode – harsh but fair I suppose.

To accompany MotoGp 10/11’s move towards all out simulation, Monumental have also vastly improved the games graphics. While hardly pug fugly, MotoGp 09/10 did lean a little too far towards arcade styled visuals, with an overly bright colour palette putting many gamers off straight from the get go. For 10/11 however, Monumental have gone for a more muted, photo-realistic approach which feels infinitely more suitable and a much better fit for the series as a whole. Although not quite in the same league as the Gran Turismo’s and Forza’s of this world, MotoGP 10/11 is nonetheless a very good looking game and certainly the best looking 2 wheeled racer of this generation.

From a technical stand point, it’s actually very hard to fault MotoGP 10/11’s visuals. The bikes and riders have been rendered beautifully, the animations are slick and believable and the lighting throughout is exemplary. The problem is, it can all feel a little dull at times. While a commitment to recreating 18 real world tracks inevitably comes with the issue of most MotoGP tracks being visually rather uninteresting, Monumental still haven’t managed to capture the furore and excitement that accompanies the start of a race. Some effort has been made, but on the whole, it still feels a little, well, boring if I’m to be brutally honest.

The audio on the other hand is excellent throughout. Unlike previous entries into the series which suffered from whiney, often unrealistic engine sounds, MotoGP 10/11 does a great job of capturing the grunt and power as you line up and the hypnotizing/annoying hum of these two wheeled behemoths as they open up on the straights. Ambient noise has also been increased and improved with crowd cheers and horns giving the whole experience a greater sense of spectacle. 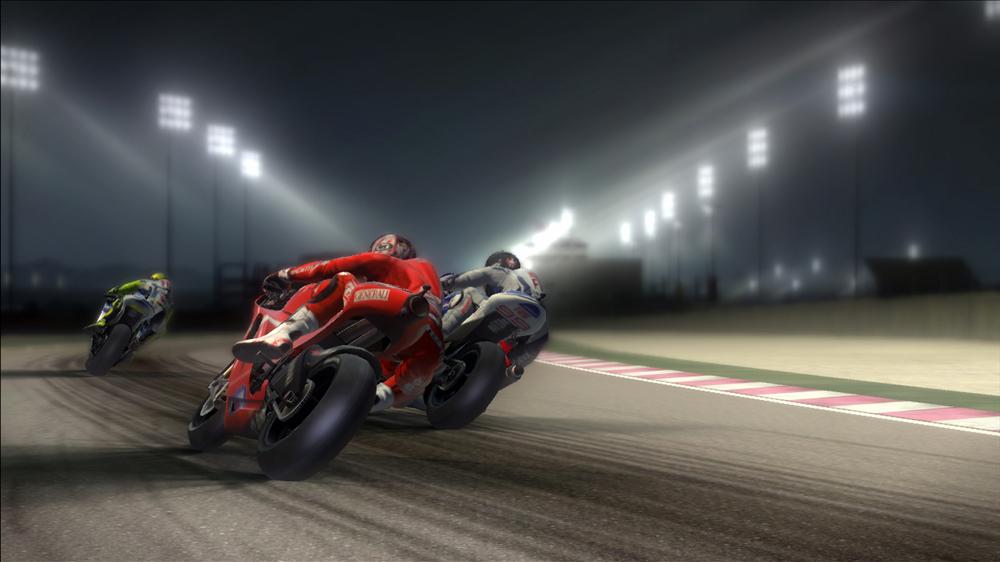 Of course, all these improvements would count for naught if the game had little in the way of a discernable structure. Luckily, MotoGP 10/11, like its predecessor, is rich in content and challenge. While there hasn’t been a huge overhaul since last years release, what is here will keep superbike fans busy for months on end.

On top of the usual Quick Race, splitscreen, multiplayer and Time Trial events, Challenge Mode, which is essentially a carbon copy of last year’s Arcade Mode in all but name, has you racing against the clock with skillful manoeuvres and show boating gaining you extra time, while Online Mode offers up races for up to 20 players in what, based on my own experience, is an all but lag free, consistently slick online experience. World Championship mode also returns, allowing you to race through a season without having to deal with the associated details that come with the full fledged Career Mode.

Speaking of Career Mode, this is where the meat of the game is found, so to speak. Starting off on a relatively measly 125cc bike as a no name racer for a no name team, you have to work your way up through the ranks, gaining both yourself and your team reputation and respect. Between racers (of which there are many) a degree of micro-management is encouraged via employment of engineers, PR Managers and the chance to research new items which works as a slightly more involving upgrade system. None of the above are all that in-depth and their simplicity will certainly disappoint hardcore MotoGP fans, but for the rest of us, they certainly offer up a pleasing enough distraction from all that racing that needs doing.

While some will inevitably argue the case for SBK X being the number one choice for hardcore superbike fans, I honestly believe MotoGP 10/11 to be the more complete, better looking and generally more rounded package of the two. It still struggles to convey a sense of occasion and the learning curve is as steep as you’ll find in any racing game this generation, but stick with it and MotoGp 10/11 will deliver in a way that few games can.