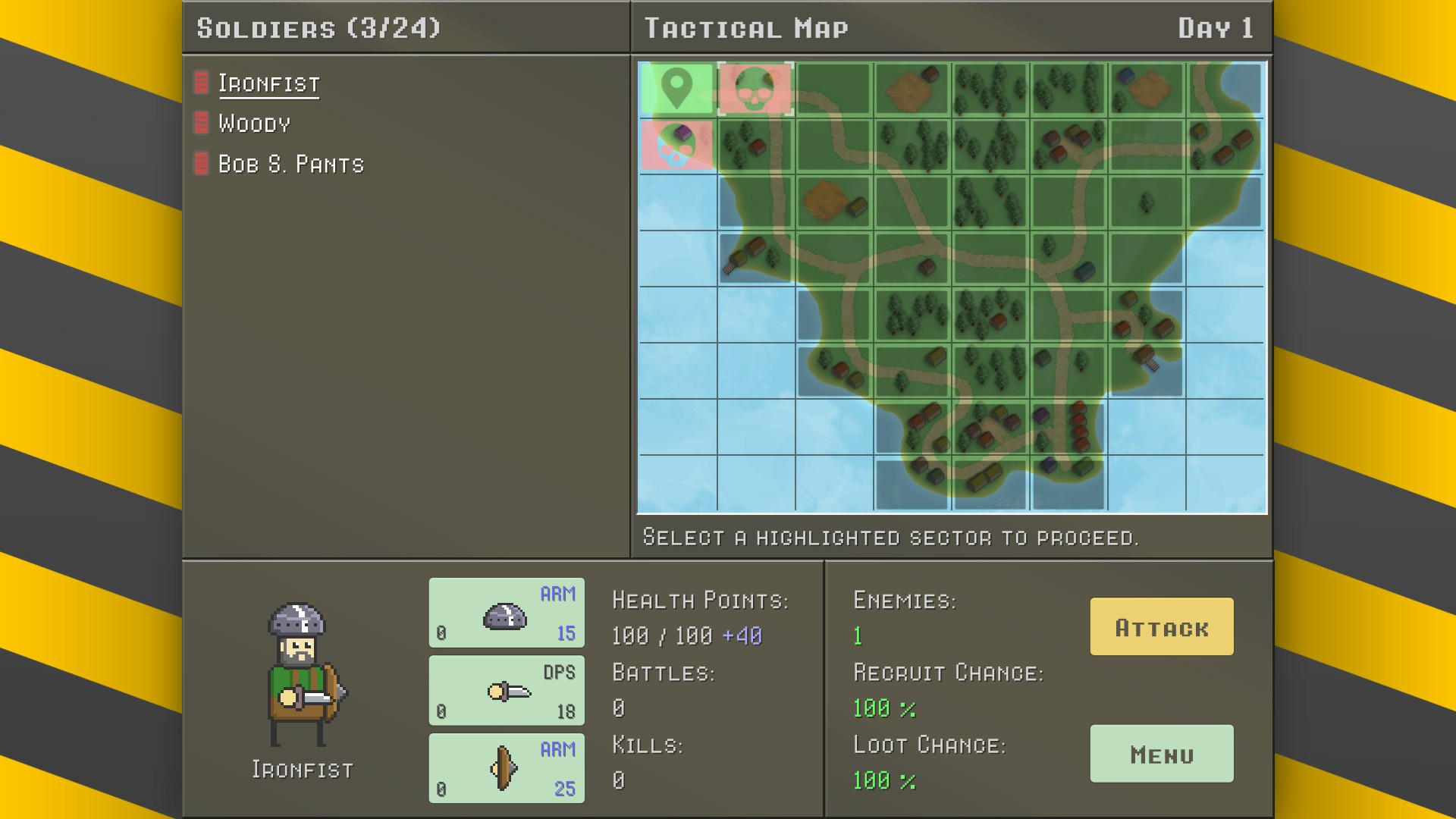 Tiny Battle Simulator uses a simple concept, simple art, and simple mechanics, to create a satisfying gaming experience that poses some challenges and can be completed in about two and a half hours.

The basic concept of the game is to take over the entire map. The map is divided into forty-five squares and you start the game with an army of three and one square. You may attack any adjacent square controlled by the enemy, travel to any adjacent square owned by yourself, and rest on any square you are currently on. Each of these actions adds a day to the in-game counter.

Each square shows you the odds of finding loot or new recruits when you rest there. When resting you are given three options to choose from, each with different chances of finding loot and new soldiers. You select one, you hear dice roll, and then you see if you got lucky. After resting, your odds go down if you rest there again, though those odds will go up again slightly if you move away and leave that space of the map for a while. You can have a total of twenty-four soldiers, and collect armor and weapons as loot. There are various kinds of weapons, bows, different kinds of shields and helmets. For each piece of armor you see how strong it is, and for weapons you are told what kind of damage it does and it’s range. 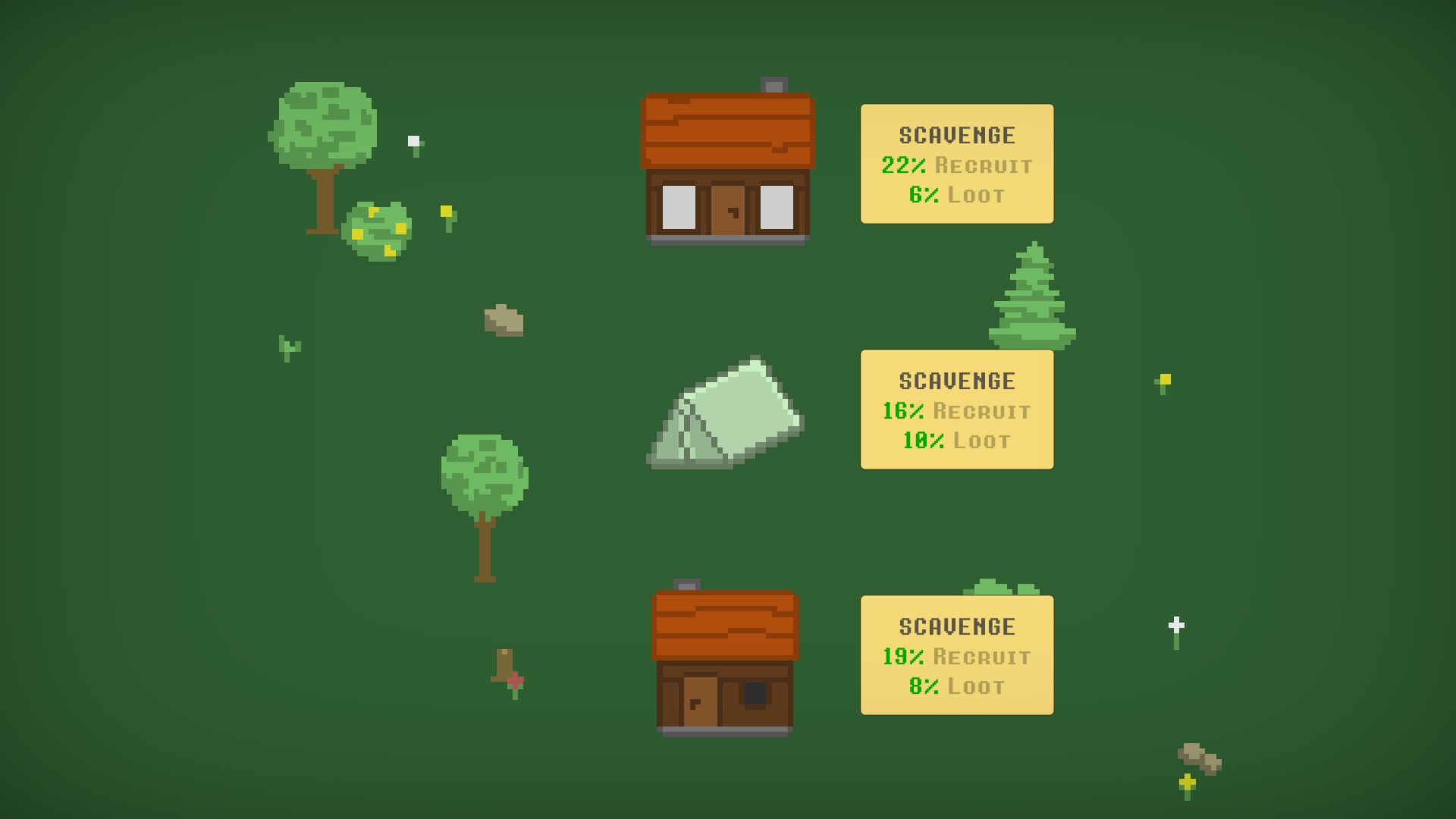 When you battle the enemy you are taken to a small map with the enemy troops on one side. You arrange your army on your side and then the battle begins, at which point you can only sit back and watch. Both armies start moving towards each other and start hitting as soon as they are within range. When someone dies, their attackers push on, moving to the next closest enemy. The challenge of each battle is how to position your troops so that you will lose the least amount. Long range attackers make this even more complex. Winning battles isn’t going to be too much of a challenge, unless you take on armies that vastly outnumber you, but if your army is depleted you’re going to have to spend a lot of time resting to build back up your numbers. You also need to rest to heal up soldiers damaged in battle.

Tiny Battle Simulator isn’t particularly difficult, but the challenge comes in completing it quickly. Several of the achievements are based on how many in-game days it takes you to complete the game and in order to keep that number low, you’re going to have to rest less often, particularly since when you rest, there is a chance the enemy will take back a square of the map and you will have to go and reclaim it, spending even more days. So you want to keep your casualties low. 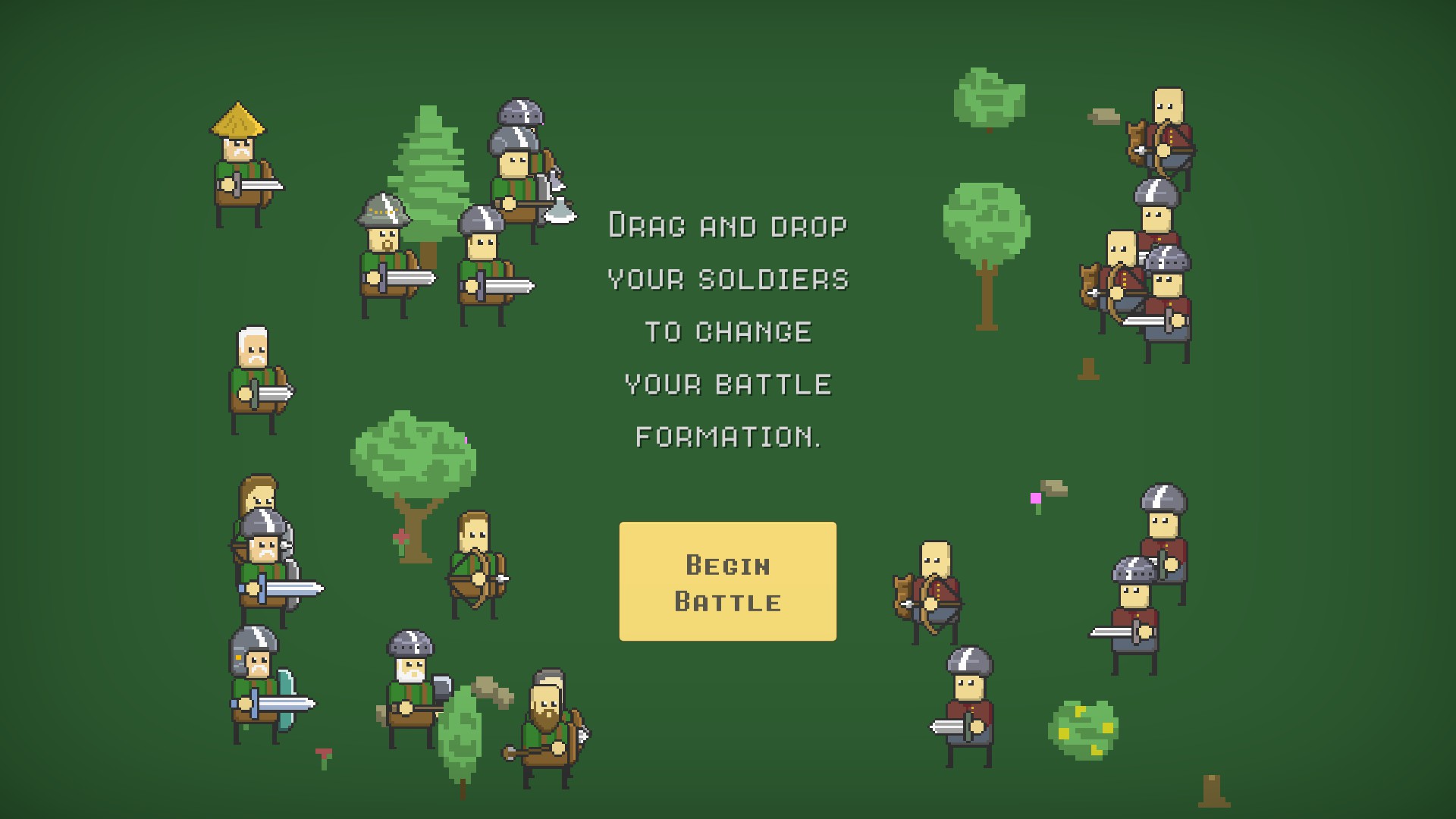 The game could use a few small quality of life additions that would just make things a little smoother. For example it would nice to be able to reorganize your soldiers in your soldier list. As it is, I kept having to go through them all, looking for my archers. Also, being able to use the arrow keys or scrolling to go through list would also be nice. In addition the game encourages you to retry battles, if you wish, with the auto save feature if your losses are too heavy, but you can’t quit mid battle. The battles aren’t long, but they can be long enough if you already know you’ve messed it up and are just impatiently waiting for them to end so you can try again.

There is great sound design in the game. The sound of dice rolls as you rest, the victory flare at the end of the battle (or the sound that plays when you lose) are all satisfying and fun to listen to. The graphics are very simplistic and pixel-y, but they work well and they fit with the simplistic nature of the game.

Tiny Battle Simulator is one of those games that make for a fun evening. It’s not a huge commitment, you can finish it in one night, it’s relaxing, but there’s also a pleasant challenge element to it. At five dollars, you get enough game for the price and there’s certainly some replay value as you try to beat your past speeds.

At five dollars, you get enough game for the price and there’s certainly some replay value as you try to beat your past speeds.